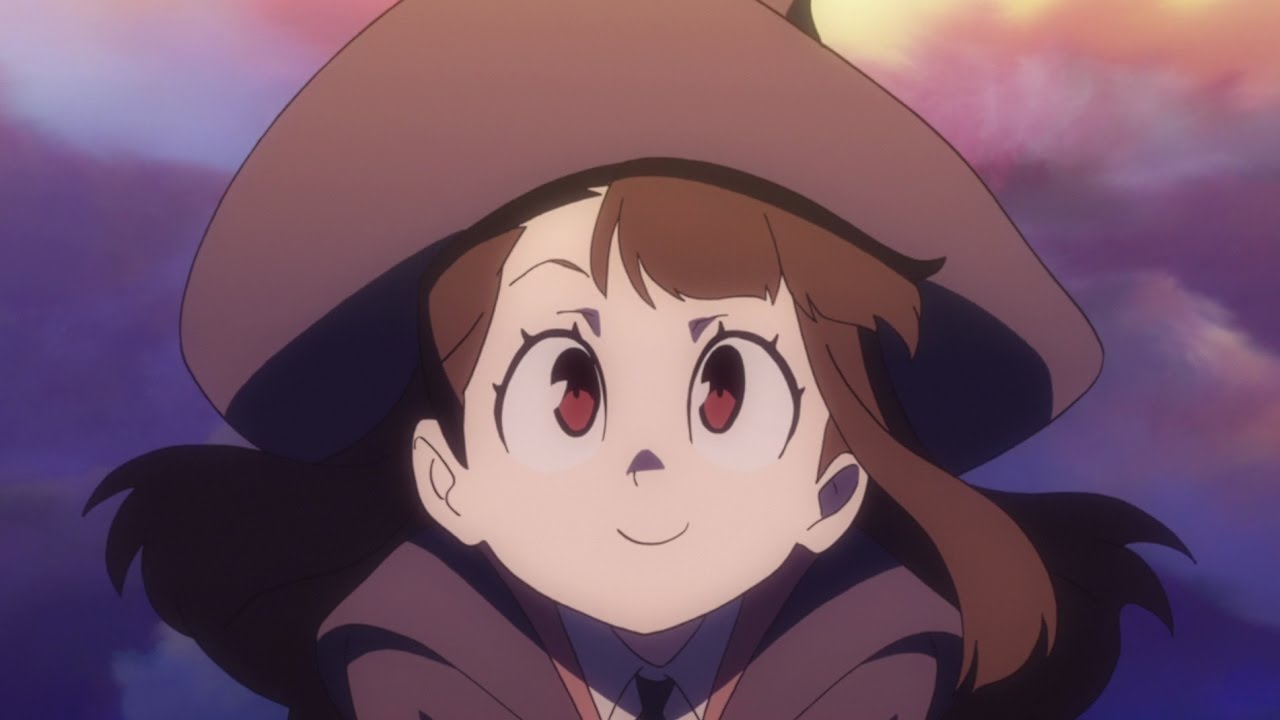 Otakon did not grant individual interviews with Trigger, but held a press conference with multiple outlets in attendance. I showed up to ask some burning, Evan-core questions about Gainax, Turning Girls, and a particular animation effect of Yoshinari’s. Thankfully the rest of the crowd had some interesting questions of their own as well.

Thank you to Mr. Otsuka, Mr. Yoshinari, Ms. Tsutsumi, and Otakon 2018 staff for the opportunity!

Ani-Gamers (Evan): It’s been about seven years since the founding of Studio Trigger. All three of you worked at Gainax previously. What do you think you’ve learned since your Gainax days and do you miss anything from the studio?

Naoko Tsutsumi: The biggest thing is when I was at Gainax I was very much just a worker. I was working in my own special division. But when I came to Trigger I was able to oversee a lot of different facets of production that I hadn’t been involved in before.

Being at Trigger now, as opposed to when I was at Gainax, I really realized the weight that such a big company had. Having a title like Evangelion that carries the company, and the weight and the legitimacy that it brings to the company versus being at a startup. That was huge.

And I think from now on we’re going to have to keep up production to be able to stay around for 20 or 30 years like a big place like Gainax. So I want to be involved in works that will help our longevity and be big hits like the ones Gainax was able to produce.

Although we’ve inherited a lot from Gainax, they’re a company that we have undying respect for.

Yoh Yoshinari: Being somebody who grew up watching Gainax works since about middle school and then joined Gainax, the studio’s existence is so huge to me. It’s overwhelming, so I don’t necessarily feel like we could overcome or become better than them. Gainax is a studio that was founded by an amalgamation of exceptionally talented young people.

Our team came out of Gainax from the production of Gurren Lagann, and although we’ve inherited a lot from Gainax, they’re a company that we have undying respect for. We’d like to be able to get closer to that level of production, but it’s a huge hurdle. So that’s where we’re headed, but it feel like it’s a long, long road. They’re going to be difficult to live up to.

Masahiko Otsuka: I think that, among the three of us, my role is probably the one that has changed the most since my time at Gainax. But I don’t necessarily feel like I’m exceptionally good at the running the show or being the boss. So I really need to spend more time being a better CEO.

But as far as the success goes, one of the things that I’ve really come to realize is that our success is largely based on the fact that I have so much support from the very young and talented staff. So from here on out I realize that I need to spend more time and energy in production and supporting the production, and helping to raise the next generation. So that’s the change that I’m trying to be and represent.

EvaMonkey (Aaron Clark): I have some feedback about the Patreon. For the live drawing sessions, there’s a concern that they’ll distract the animators from production. And some fans are a bit more interested in seeing behind the scenes footage of the actual production itself.

Yoshinari: I think honestly, yeah, it is going to kind of affect things. It’s a new endeavor so we’ve got to really try to see what we can do about it and see what happens. We feel like it’s a new type of entertainment and a new type of show so we’re still backing the idea of live drawing.

Otsuka: We’re really happy for that idea, seeing the background details of our productions. We have definitely been discussing the effects of doing so many live drawings and how much of a burden it could be. But from the very beginning of this endeavor we decided that the production of the anime itself is the most important thing, so we’re very conscious of the effect that the Patreon live drawing has on the people involved in that, and we’re really trying to make sure that the staff that is involved is properly compensated for their involvement as well. So we’re definitely very aware of the fact that it can be a distraction and we’ve been discussing in depth how to keep that balance. Thank you for your recommendation. We really appreciate it.

Cosplaynyc (Marielena Pagan Rodriguez): How do you feel when you see fans around the world cosplaying the characters you create and would you ever consider cosplaying?

Tsutsumi:(laughs) Honestly I don’t really have a hidden desire to cosplay myself, but in traveling the world and seeing what people have put into their cosplay, and seeing how intricate some of the costumes are, it’s very inspirational to see those characters come to life in a way that I hadn’t even imagined. The dedication to a franchise or even a character that would lead somebody to go through the process of creating a realistic costume and taking photos of it, that emotional investment is huge. It’s very inspirational. I really appreciate it.

Yoshinari: Me? (laughs) I think that the difference between being a director and being an actor really plays into this question. As a director I am not the person who creates the acting. So I don’t really have much interest in being the actor.

I also feel like, even though cosplay is something that was technically maybe invented in Japan, it’s actually inspired by Western costuming and was then re-imported to the West from Japan. So the Japanese, when they’re involved in cosplay, are kind of going out on a limb to do it. But when you come to America it’s very apparent that this was the culture that costuming was born from. So maybe it’s more of a true form of costume play than what you would see in Japan.

Seeing that really does drive it home that there’s maybe a more pure version of fandom that exists in the West, and that cosplay kind of evolved into the form that it should be when it was re-introduced to the West. Japanese people are a very shy people. And while there are a number of people who go out on a limb and do cosplay, it’s very much the exception and not the rule. So, me being a very shy person myself, I don’t think I could cosplay.

The O Network (Eddie): How has the partnership with Tsubaraya Pro been going on Gridman?

The O Network: As I understand it, the series has an entirely new story. Did Trigger and Tsubaraya work together to create the new story?

Otsuka: We were able to work with them for the designs of the kaiju and also, Hasegawa-san, who wrote the scenario is a huge tokusatsu fan and a scenario writer. We really tried to concentrate on making sure Gridman has the representative feel of tokusatsu, although it’s an animation. A lot of the staff that worked on Gridman are also huge tokusatsu fans. So that was a motivation within the team throughout the whole production. Our goal was to create an anime that really reflected the love of tokusatsu.

Ani-Gamers: Mr. Otsuka, you worked as a producer on Turning Girls. We’ve heard Mr. Wakabayashi talk about it a bit, but I’d like to get any further details about how it got started and who worked on it.

Otsuka: Actually, to be honest, the main staff who was involved in writing Turning Girls quit, so I think we won’t be able to make a continuation of that series. But, the person who was really pivotal in the plot development of Turning Girls was actually a normal worker, not really an anime writer or anything. Although she quit and she’s not around anymore, we really like the result of that approach, of bringing someone in who has fresh ideas, so we’re not going to cross that off of the list of possibilities in the future.

The four-pointed star used to be someone else’s effect and I kind of just … did it. And then I made it a little easier to utilize.

Unknown Outlet: Has the partnership model, with companies like Netflix and Crunchyroll, impacted the production and funding of anime?

Otsuka: I think at this point there hasn’t really been much of an influence. I think that’s up and coming. The Internet has been integral in the world being exposed to anime, and a lot of that happened through access to illegal sites and things being illegally streamed. As an anime creator on the ground level, I really used to feel like that was a good thing, like the exposure was worth it. The ability to see things for free and the exposure to a lot of different anime created a market that didn’t really exist until then.

But now with the existence of streaming services, we’re able to receive funding back for things that we’ve made. Although there hasn’t been as much of an epochal moment yet, I think in a few years it’s really going to be apparent that that's going to be a game-changer, the ability for funds to be returned back to the anime production committee and the production companies and that sort of thing. It’s yet to be seen what that will do, but we’re looking forward to the change.

Ani-Gamers: There’s a visual effect in a lot of Trigger series, a four-pointed star. I’ve heard some animators credit that to you, Mr. Yoshinari. How did you come up with it and what kind of influences did you have in mind when making it?

Yoshinari: I don’t really think I’m the one who created it and spread it. As far as I know, the first person who used it might have actually been Hayao Miyazaki. And then there’s Yoshinori Kanada who’s a legendary animator. So there’s that theory as well.

It might be a little bit of an uncouth way to say it, but it used to be their effect and I kind of just … did it. And then I made it a little easier to utilize. I think that’s what sort of led into everybody starting to utilize that effect. So I didn’t really think it was going to be that big a deal. But apparently it was so easy to use to great effect that everybody started using it. I didn’t intend for that to be the case, but it’s kind of a byproduct.

Unknown Outlet: Darling in the Franxx was very popular in the West. How are you guys doing after the conclusion of season one and how are you taking all the positivity? And where do you go from there with that show?

Otsuka: The director actually put pretty much everything he had into that first season and is kind of depleted at this point. It’s yet to be seen if we’ll get to see anything else of that series.

Yoshinari: We didn’t really know it was that popular. So we want to take that word back to the director. To be honest, in Japan it was kind of not so popular. But with everybody’s support we could get the director moving. Because I think he doesn’t know how much it means to everybody.

That's all for this transcript, but stay tuned for more of our interviews from Otakon 2018, including two with Gundam: Iron-Blooded Orphans staff Tatsuyuki Nagai and Kanetake Ebikawa!