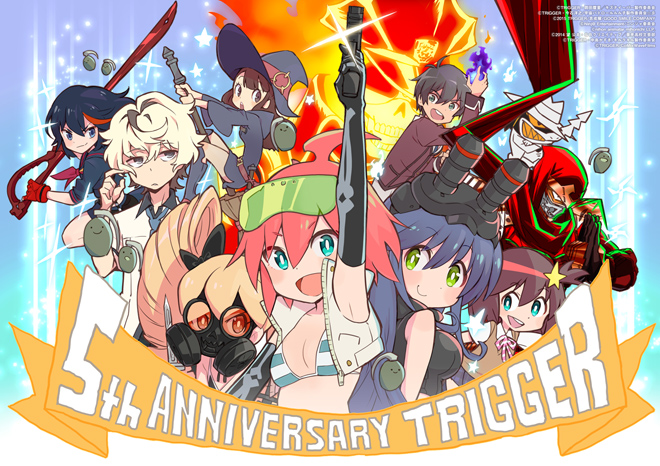 New Jersey anime convention AnimeNEXT has a bit of a love affair with anime studio TRIGGER, the creators of hits like Kill la Kill (Netflix, Crunchyroll) and Little Witch Academia, as well as cult favorites Inferno Cop (YouTube, Crunchyroll) and Space Patrol Luluco. Though shows like Inferno Cop tend to attract a particular sort of fan with their oddball sense of humor and lo-fi visuals, TRIGGER packs panel rooms year after year at AnimeNEXT. This year, as usual, their events were the centerpoint of the convention; those who were lucky enough to attend regaled their jealous friends with stories of exclusive Inferno Cop episodes and marshmallow guns (the artists have made a tradition of shooting marshmallows at their New Jersey fans).

As AnimeNEXT wound down, I sat down with the four artists — a mix of TRIGGER staffers and associated freelancers — in a hotel suite high above the Atlantic City Convention Center. Akira Amemiya, director of wacky animated shorts like Inferno Cop and Ninja Slayer, conveys nothing of his work in his quiet answers and reserved body language. Megumi Kouno, who is both an accomplished animator (works include The Idol Master and Panty & Stocking with Garterbelt) and the wife of Amemiya, is similarly shy, and only chimes in when prompted by her co-workers. By contrast, writer/director/idea guy Hiromi Wakabayashi has an almost American swagger, with his head cocked back, arms folded behind his head, and a mischevious glint in his eyes. Shigeto Koyama — the director of Animator Expo short "Obake-chan", a concept designer for Inferno Cop and Big Hero Six, and the character designer for Heroman — gives off the vibe of an aloof artist, but occasionally an interesting subject prompts a wide grin beneath his white-rimmed sunglasses.

It's clear from the way these four interact that they are longtime friends. Wakabayashi refers to Amemiya as "Amecchi" at one point, a nickname for the animator/director. TRIGGER PR rep and interpreter Tatsuru Tatemoto jokes around with the artists in between providing English versions of their responses. Rarely in my interviewing experience have I met anime creators whose passion and camraderie is as clearly evident as it is at Studio TRIGGER.

I'd like to thank Chris Barber for organizing the interview and of course Tatsuru Tatemoto, Akira Amemiya, Megumi Kouno, Hiromi Wakabayashi, and Shigeto Koyama for sitting down with me.

Ani-Gamers (AG): I know you guys are big Marvel fans, so… Team Cap or Team Iron Man and why?

Hiromi Wakabayashi: I’d take Spider-Man's side, I guess. I'd want to be that kind of free spirit. Even if everyone’s fighting, I’d like to have that easygoing style. You know, party a little, then go home after that.

Akira Amemiya: I’m going to go with Black Panther as well. I never thought… being able to forgive… he was just really big. He was a man. He was just… too cool.

Ani-Gamers: You guys are cheating!

AG: Mr. Amemiya and Ms. Kouno, could you describe your animation process? Do you use video reference? Do you act things out yourself? Are there any other animators whose work you use as a reference?

Amemiya: I usually watch other people's finished animation sequences, rather than the still keyframes, and after watching the whole sequence I get the feel of the scene and start working on my own layouts and keyframes. I don't really imitate what I see. I get pumped up by watching something by someone I respect, and I add my own little touch based on what I’m feeling at that moment. The mood is really important for me. I get particularly inspired by Masami Obari and Hiroyuki Imaishi’s scenes.

Kouno: I re-enact the scene myself and try to capture the feeling of it. I also work off of references. Though what ends up on the screen at the end of the day is based on discussions with the rest of the staff. I’m always moving around at my little desk, animating. 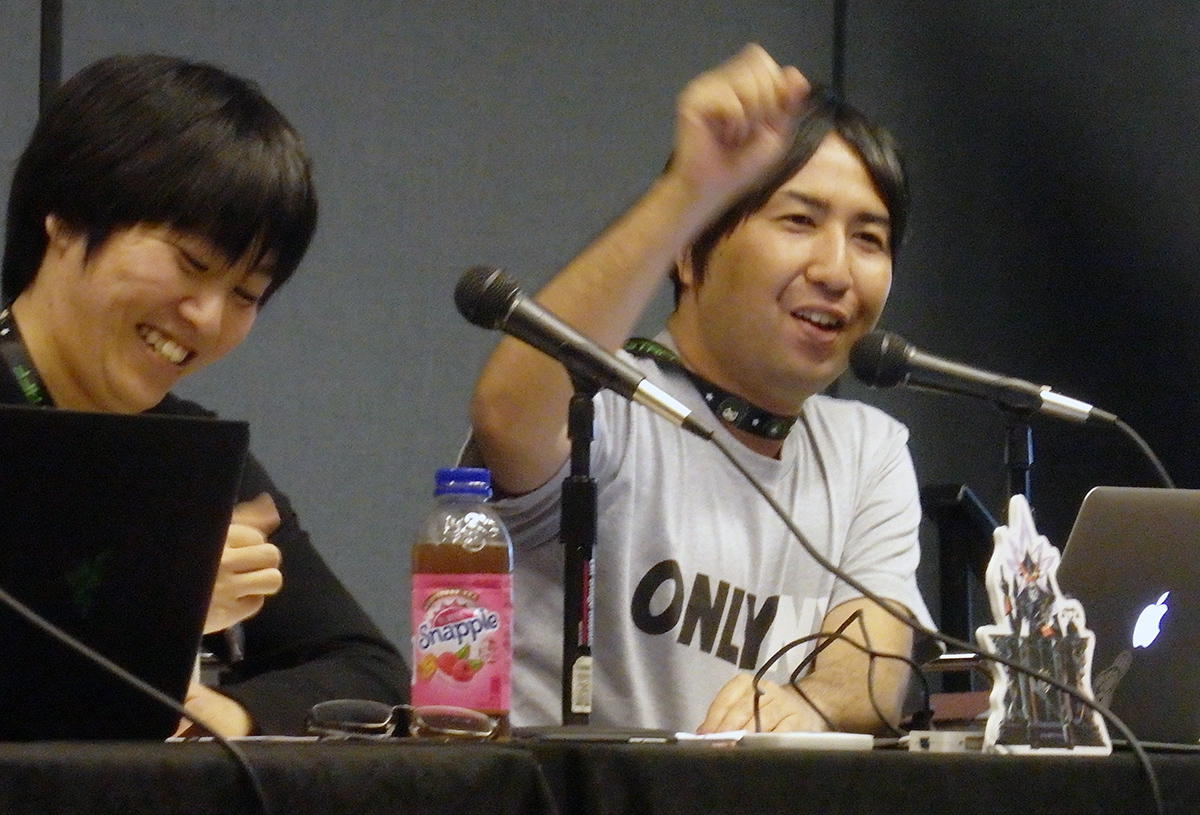 AG: Most of you have worked in some form or another under directors Hiroyuki Imaishi, Yoh Yoshinari, or Mr. Amemiya here. What do you think are some of the differences between working with each of them as directors?

Koyama: I never felt like I was working for them. I’ve been working with them since Gurren Lagann (Netflix, Crunchyroll), and I think they’re closer to friends or comrades. So it’s not just a relationship between a director and designer. I have something more than that with them. They’re the team I’m most comfortable working with.

Wakabayashi: In terms of Mr. Imaishi’s projects, I’m basically a sidekick or lackey to him.

AG: Are you Robin or Bucky?

Jokes aside, Mr. Imaishi does an excellent job gathering input from all the creative staff on his works. Certain directors just make their own work, but Imaishi takes input from everyone, whether it be [Atsushi] Nishigori, Sushio, Koyama, or someone else. He makes projects where you can feel that the staff is participating, that they all stand out well.

If a certain staff member says, "I want to try this new approach," Mr. Imaishi will give them the opportunity, as long as they take full responsibility. I think that’s the main reason why a lot of staff want to work under Imaishi and why they really enjoy it. I think a lot of the staff feel that their main goal is to put a smile on Imashi’s face. If he smiles, that means you did a good job.

Mr. Yoshinari on the other hand, he’s talented in so many different ways. He can do the pencils by himself, the color by himself, he can do basically everything. He does try to investigate what the individual staff members want to do in his work, but he’s rather shy, so he doesn’t approach us too often.

I’ve never worked under Amemiya as a director yet, so I’d better be ready! (laughs)

Amemiya: I guess we’ve made a home video before. (laughs)

Wakabayashi: Yeah, I guess that’s the kind of relationship we have.

Imaishi and Yoshinari are both older than me so i kind of look up to them, but Amemiya is younger than me, so I expect great things from him.

Amemiya is like a padawan to Imaishi, but their style is very different, so it’s entertaining to see what he makes. It’s very different from Imaishi. He’s got the most comedic touch in TRIGGER.

Amemiya: I initially joined TRIGGER because I was a big fan of Imaishi. Right now I’m trying to surpass him, and maybe take over his seat once the opportunity comes. Maybe, you know, Yoshinari might smite me sometime soon. (laughs)

Kouno: What Wakabayashi said is spot on. Imaishi takes in everybody’s ideas. Then, after we’re finished, he comes and compliments us when we do well, so all I can do is wag my tail and follow him. 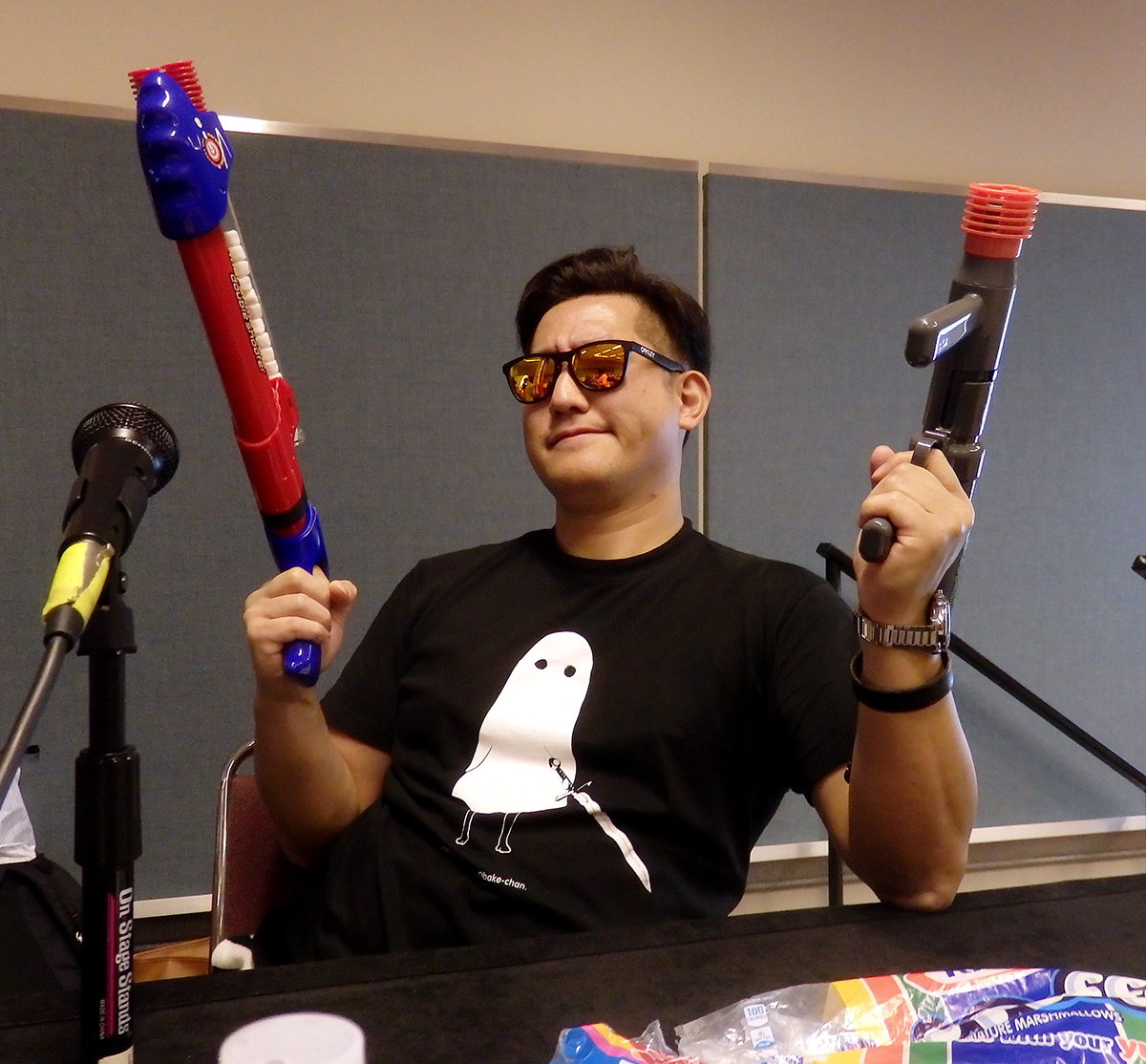