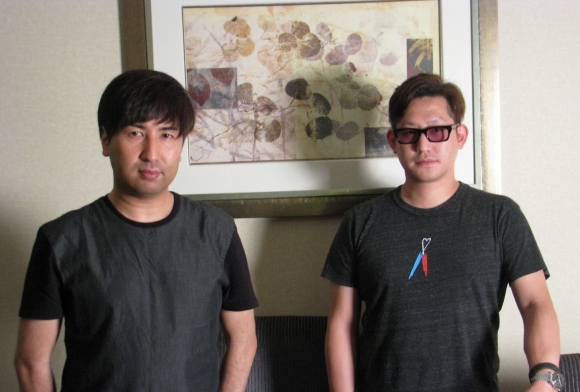 On the last day of AnimeNEXT, Hiromi Wakabayashi of TRIGGER and Shigeto Koyama, who worked on such TRIGGER titles as Inferno Cop and Kill la Kill, were kind enough to sit down with a handful of people who were overflowing with questions. There were 25 minutes to squeeze in, round robin style, questions from four outlets, and luckily Ani-Gamers had two representatives in the room. We only got to ask a few questions each, but you’ll find out what we found out—how Ryuko’s final form came to be, why TRIGGER sought independence from Gainax and their current relationship, new projects, and more—after the break. Ani-Gamers would like to sincerely thank Mr. Wakabayashi and Mr. Koyama for their unparalleled openness, refreshing frankness, and bold humor as well as the phenomenal efforts of translator Tatsuru Tatemoto.

On Kill la Kill,,,
When David asked about Ryuko’s myriad design options (which were shown in a panel the previous day) and how the one we all recognize now came to be chosen, the guests said Ryuko’s design wasn’t 100% complete when they were forced, due to time constraints, to move on with production of the first episode. So it turns out that Ryuko’s design was actually refined as things progressed. This happened slowly at first, because the animators were trying to keep in mind an aesthetic that would look most natural/comfortable in Mr. Sushio’s style when he animated it.

Speaking again to character design, David brought up the fact that playing around with toys was also mentioned during TRIGGER’s previous panels. So he asked which toys Ryuko and Satsuki were based on. Evidently, none were used for Ryuko or Satsuki, but other characters—the Elite 4, Tsumugu, the DTR, Mikisugi—were influenced by “a lot of toys.” The designs derived likenesses to certain aspects, specifically the bulky, strong necks and backs, of Marvel toys as well as those from Toy Biz and, more specifically, the Marvel Legends series.

During TRIGGER’s panel on KLK, it was also mentioned that several scripts were thrown out during production at a very early point. Thinking back on this, David asked if KLK ending on a positive note was part of the original direction due to his observation of hints to the contrary throughout the show. As it turns out, the final ending was the one initially intended; there was no alternate ending in mind. The people involved “were pretty solid with the happy kind of feel” from the beginning, equating it to “a high school girl graduating, growing out of her uniform.”

On crowdfunding/Kickstarter,,,
Since many creatives from Japan have previously shrugged off the likes of Kickstarter and the concept of crowdfunding in general during Q&A sessions, Ink asked about TRIGGER’s very successful Little Witch Academia KS campaign—specifically how they came to think about doing it and their reaction to the domestic and international support. As it turns out, the reason was feedback. The first LWA episode got ~800,000 views on YouTube. While about 60%-70% of these were Japanese, the majority of the comments left on the YouTube page were from the American, or English-speaking, audience. Comments such as “We feel bad watching this for free. Can we give you guys money somehow?” and “Why don’t you do some sort of crowdfunding/KS?” got PR Representative Tatsuru Tatemoto to read up on KS and crowdfunding. He then brought it up to his boss, who was fortunately very lenient and said “Let’s try it out!” As to the overwhelming success of that gamble, Mr. Wakabayashi said they were “quite shocked” when they reached their goal within hours instead of the 30 days they’d anticipated it taking and even more surprised at the total amount of money they were able to raise.

On Ninja Slayer,,,
The following was in response to questions posed by Ani-Gamers and Japanator on behalf of Alain Mendez of Reverse Thieves since he could not make the re-scheduled interview due to a panel conflict.

TRIGGER is currently working on an adaptation of Ninja Slayer, but who will comprise the animation production staff? We’ll have to wait to find that one out, unfortunately, as TRIGGER cannot reveal that information at this time. They assured us, however, that this project will be handled by their studio. Ok, that’s sensitive information and keeping it that way is understandable, but when asked about plans regarding the mythology of “the authors,” Wakabayashi responded with the cryptic “I personally think that we should just put them in the front line. Maybe they’re shy? I don’t know,” and chuckled … knowingly.

On the separation from Gainax and TRIGGER’s independence,,,
In response to a question by an AnimeNEXT representative, the guests mentioned how the Gurren Lagann and Panty & Stocking team at Gainax went independent and that those at TRIGGER still "kind of" carry the Gainax ideals. This evoked a deeper curiosity in Ink, who asked after the specific reason(s) behind the decision to go independent. While noting he was not technically part of TRIGGER, Mr. Koyama said he believes the staff at TRIGGER wants to do everything by themselves as to take full responsibility for their own work.