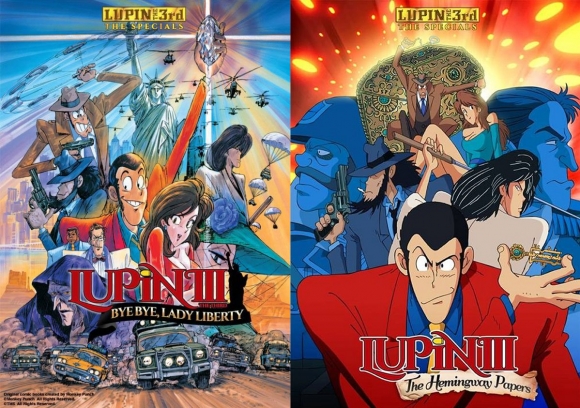 I’m going for a two-fer on this review, as Discotek released these two Lupin the 3rd specials about two months apart this year and that is some kind of record for North American Lupin releases. Both of them are directed by anime legend Osamu Dezaki (Space Adventure Cobra), and both of them stay as close to the original formula as possible. Let’s start with the first one: Bye Bye Lady Liberty.

Lupin has decided to retire after the sophisticated police computers (of INTERPOL!!!) that the forces of law and order use start collating data on him as well as his gang and allies. After trying to steal it from underneath police nemesis Zenigata (of INTERPOL!!!), he gives up his life of crime, and not even his friend Gigen can coax Lupin back. But when Gigen and an old friend’s plan to steal a crystal from the Statue of Liberty goes tragically wrong, the gang are back together to stop the Three Mason group from getting their hands on the crystal and help a lady Goeman is protecting get away from the clutches of the group.

Bye Bye Lady Liberty is the caper genre distilled to its most potent essence.
The story takes a while to set up but once it does, it flies along at a breakneck pace. The parts that make up the story (Lupin and Gigen, Michael the young computer whiz, Isabel the beautiful socialite, Fujiko and her scheming) all come together and gel as Dezaki uses his trademark Harmony moments—moments of action or crisis freeze framed, watercolored, and repeated at different angles—to advance the story while keeping a grip on needing to hit certain marks. Jigen and Lupin have to get a chance to climb into a vehicle and destroy stuff, and this they do—destroying a New York warehouse and yard while trying to run over the Three Mason’s minions. Fujiko has to be in on it at some point, and she is by seducing the number two in the organisation while looking for jewels and gold. Of course, with a weird organization like this, we have to have an ancient leader, and Dezaki decides to loot Star Wars and give us Number 1: a Sith Lord, if ever there was one, complete with mind powers and a super computer. I kid you not. If you started watching a crime caper film, would you suspect that at some point the gang would steal the Statue of Liberty? No? Well, it happens, and I couldn’t help but chuckle and say, “Of course, he was going to steal it! I mean, what else would he do?” At the same time, Goeman actually uses his trusty katana Zantetsuken to slice through an Apache helicopter. Now I can say I’ve seen him chop down anything. I don’t mean he clips the copter, I mean he slices it into bits. Just wow is all I’ll say. 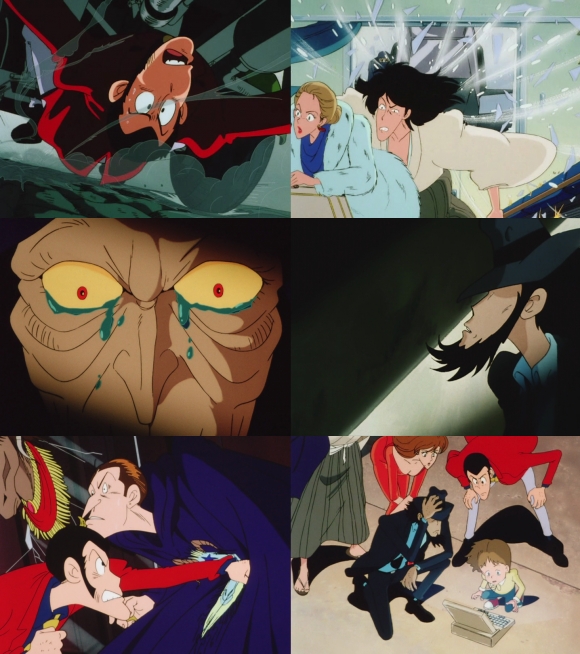 There are elements of the film that just don’t work. I can’t believe young Michael would just wander around without anyone protecting him. He also carries around the bulkiest computer/McGuffin I’ve ever seen, and it has things like high-speed processors, GPS, push notifications, and vibrate modes long before Steve Jobs cornered the market. If you ask me, he shouldn’t bother looking for a super virus, he should just sell to Apple. Speaking of that Super Virus, it gives rise to one of the weirdest moments of the whole shebang: a character communing with the computer in the Three Mason’s HQ, using said crystal, to upload the virus from their memory. Ooookay. None of this stops you from having a good time, and as Lupin adventures go, it’s a bit easier to take than say Mystery of Mamo. Bye Bye Lady Liberty is the caper genre distilled to its most potent essence.

Even James Bond can’t pull off that kind of cool.
The Hemingway Papers take an urban legend about the eponymous writer and adds the elements of a whodunnit and a treasure hunt at the same time. Lupin finds out about a treasure that the writer Ernest Hemingway supposedly wrote about on the island of Colcaca (which is supposed to be in the Mediterranean) and decides to check it out. At the same time, Goeman is working for “President” Cansano, a local militant who’s fighting with warlord Carlos, who happens to have his own hired gun, namely Gigen. Into this, Lupin glides. I mean that. He really glides in after flying over the island. I love that, as the pilot starts to leave the island’s airspace, Lupin keeps saying, “I want to get off, please” in a quiet and polite manner. When he gets nowhere, he simply jumps out of the plane without any thought, planning, or even so much as a precautionary glance, he changes his briefcase into a glider and plummets thousands of feet to the ground. Lupin lands with a slight bump but no worse the wear. Damn, even Bond can’t pull off that kind of cool. Once there, he hooks up with Maria, who owns a bar that is located in the middle of the island and inexplicably has enough cashflow to order beer on a regular basis despite not having any customers. She seems to have both Cansano’s and Carlos’ men as her customers, but I doubt it. Also, for a bunch of gun nuts playing at soldier, they are going through cash like crazy. Driving everywhere in jeeps and APC’s (gasoline), ordering in tons of equipment (ordinance and tanks), and hiring numerous mercenaries (Jigen, Goeman, Crazy Mash) has got to add up, and by the time our heroes arrived, they still hadn’t even found the treasure! What, were they independently wealthy or something? An arms dealer with his secretary in tow (it’s Fujiko, naturally) is only going to ratchet up the price, but Dezaki doesn’t bother with these details. but honestly, doing so would only ruin things for me. Also, why has nobody noticed that Zenigata is still locked in the arms dealer’s limo? Zenigata got treated like dirt in Bye Bye Liberty, but here, he really gets it in the face. After waiting for days to be fed, he storms right through a trapdoor dungeon gate, runs a full flight of stairs, and accosts the nearest guard for food. Fujiko spends this one looking after number one and even has time to be jealous of Lupin hanging out with Maria. 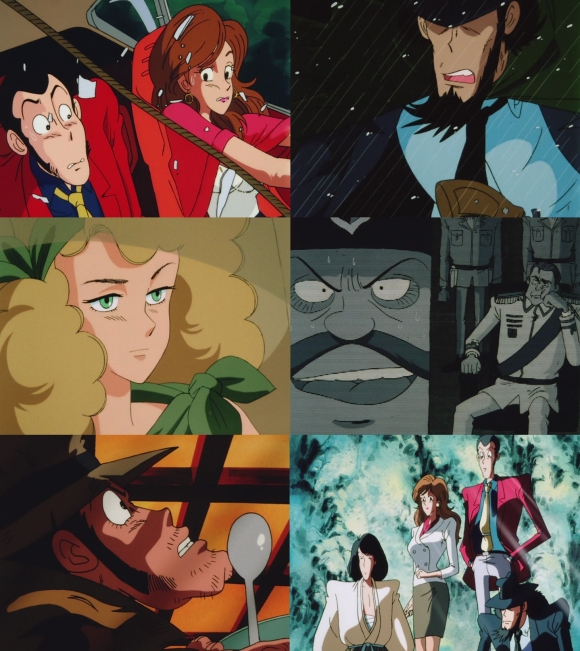 Dezaki really was made for these specials, and here he makes Lupin shine like the proverbial hidden diamond. Lupin is a bragard and womanizer and drinks like a fish, but he’s also quick on the draw, has no trouble finding a fight if he wants it, and generally comes through for his gang. Likewise, the gang goes to extraordinary lengths to save him, and even Fujiko is less avaristic than she usually is. In Mystery of Mamo, the gang takes time to get their groove together and fight Mamo while at times looking fractured. Here, the gang might have their own side projects but, first and foremost, they’re in it for the adventure. The money helps, but the adventure is what it’s all about. Brilliant work by Discotek for bringing these out, and top marks for bringing in Reed Nelson of Lupinthe3rd.com and ANN’s Mike Toole (of the Internet) to give commentary tracks for both films. There a bunch of liner notes to explain some of the minutiae of the Lupinverse, and both films make it out of the Trap Door in time for Christmas.

Osamu Dezaki really was made for these specials and here, he makes Lupin shine like the proverbial hidden diamond.

That’s it for another year at the Trap Door! Hope you liked my eventual Lupin content. I might have time before the new year to squeeze one more title in, but that is dependant on my free time (as you can imagine). Coming in January, we’ll be settling into the last five titles or so of the column before our secret Trap Door final project gets unleashed. We’re hoping it will be around April or May but we’re bringing in help (hopefully) on this last one. I’m going to try some more modern titles in the final five and see if whether I can finish it out without inflicting more Odin-style pain on you. But I can’t promise anything ;-)