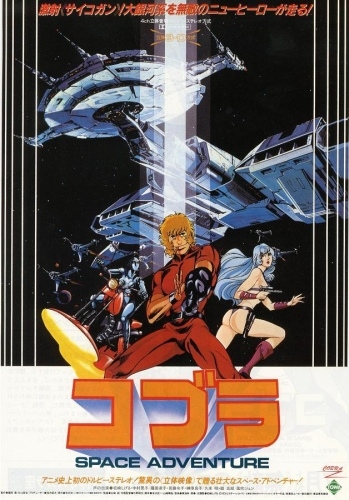 Buichi Terasawa is crazy. Not Richard “Shoot My Car” Pryor crazy but that awesome crazy that can only be seen and read, never described. The man just doesn’t live in the same universe as us. In his stories, heroes can find and kill cyborg replicant women hiding amongst real women based on the residual heat in their bodies, after they’ve just had sex with the hero. And so on. If you’ve ever tried to read Goku Midnight Eye (something I'm in the process of doing) then you know what I’m talking about. If you’ve not, then it’s better if I introduce you to the film version of Terasawa’s other master work: Captain Awesome McSpandex Shoots Everything, Smokes, and Has Sex. Or as it’s more commonly known, Space Adventure Cobra.

The film is a '70s throwback with a James Bond-esque devil-may-care attitude and a sci-fi slant.

Set in the FAR, FAR FUTURE, Space Adventure Cobra is one part Blade Runner, one part Indiana Jones. Cobra, the most wanted man in the universe (go figure), has faked his death. Armed with a transforming left arm which can change into his famous Psycho Gun, he fights against the neferious Pirate Guild and also tries to avoid the law in the form of the Milky Way Patrol. Hoping to live a life of anonymity, nevertheless he is drawn into the plight of Jane, a bounty hunter hoping to rescue her sister from the clutches of the evil galactic Guild henchman and secret gold chrome nudist, Crystal Boy. Jane initially tries to bring another dirtbird for a bounty and Cobra starts hanging around her. But after he’s set upon and she’s betrayed, they team up together. Seems she’s been waiting for him. All right, now, in any other movie this would mean they might sleep with each other. Not so in Terasawa’s world. His heroes get to have their cake and eat it. But it’s not all good. Poor Cobra is not a man whom the universe favors. In other words, Jane’s not going to survive this movie. It’s a shame because as an atypical shallow character, I kinda like her. Turns out Crystal Boy is putting the psycho moves on her twin sister, Catherine, because he wants Catherine to destroy her own planet which, apparently, only she or her sisters can do. Something about a mystical planet and so on. Really, it’s not that important to pay attention to the plot. All you need to know is Cobra and his androgynous android, Lady, help Jane and, later, her OTHER twin sister Dominique rescue Catherine while flying in a kickass spaceship, wipe out hordes of enemy rent-a-soldiers, fight in glass forcefields with gold chrome rib-bone bow staffs, connect with three different women at the same time while having sex, and hopefully be back in time for cornflakes.

The film is a '70s throwback to a James Bond-esque devil-may-care attitude and a sci-fi slant. Jane and Dominique embody the '80s cinema version of women; strong, capable but still accepting of love. Cobra fulfils the role of the homeless wanderer adventurer; answering to no one and nothing, this man without a true past nevertheless tries to find meaning in his life by fighting against what he considers to be injustices. The film jumps with aplomb to all kinds of locations; busy spaceports with monolithic towers, strange endless planets of desolation, giant space nebulae. In many ways the movie is more '70s-bittersweet than '80s-relentless-march-of-victory. This, in my mind, saves Space Adventure Cobra from being just another crazy action adventure. 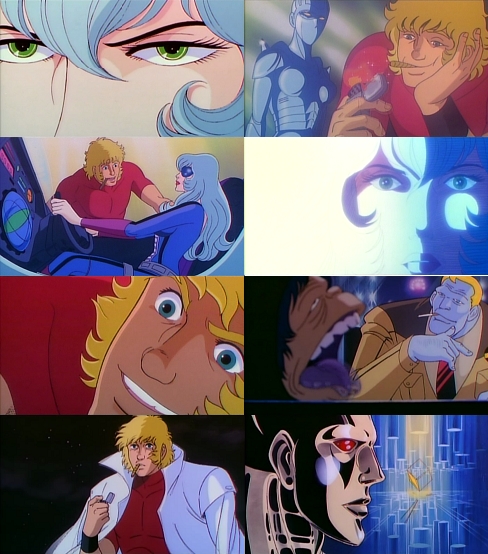 What makes Cobra work as a concept is that Terasawa and the late anime director Osamu Dezaki (Black Jack The Movie, Golgo 13: The Professional) just run with everything in fifth gear. Why is the Guild so interested in Cobra? Why the need to destroy him? Couldn't you just nuke the guy from orbit? If she’s that important, why isn’t anyone else looking for Catherine, other than her sisters? Who knows and, ultimately, who cares? I don’t. I think the reason I don't care is because it's got an unmistakable 1970s vibe to the proceedings despite being made in the decade after that. Your main squeeze just got taken out? Head to a snow planet and hang out in a space disco. Approaching the forces of evil? Break out a cigar. For no good reason, when Jane and Cobra (or Dominique and Cobra for that matter) talk, they talk in that “leaning over the other person as if to kiss them which invariably they do” manner. I guarantee it will not impede your enjoyment of the film. Yes, the characters are somewhat one-dimensional, especially Crystal Boy (Bwa-ha-ha! I’m being evil, why? Because I CAAANNN!!!) but really, if you’re looking for French New Wave cinema levels of depth, you won’t find it here. It’s got a lady singing an '80s J-pop ballad at the end credits, for pity’s sake! 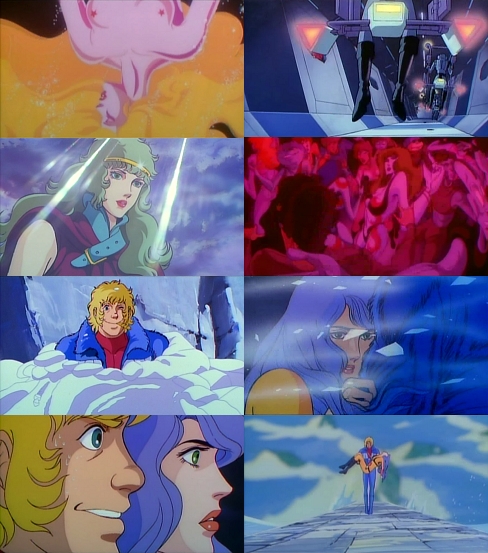 It has all the hallmarks of high 1980s film aesthetic with a 1970s plot and character delivery.

The cast on the Japanese language track is amazing. Cobra is a lot of fun but sadly this is Shigeru Matsuzaki’s only outing as the title character with Nachi Nozawa taking over until his death in 2010. Akiko Nakamura’s turn as Jane is surprisingly good given how she’s only in the film for around half the running time. Jun Fubuki was good as Dominique but she’s not in it enough. Toshiko Fujita as Catherine only comes alive, truly, at the end and maybe that was the best decision. I'm sad that Goro Mutsumi didn’t go onto bigger things after playing Crystal Boy (which wins my award for most disarming and misleading villain name of the year). The dub, which on my Manga UK DVD is not the fabled “Yellow” soundtrack dub, is OK with Carl Macek at the helm and Dan Woren as Cobra and Barbara Goodsen as Jane. It’s entertaining and that’s what you want from an '80s anime. 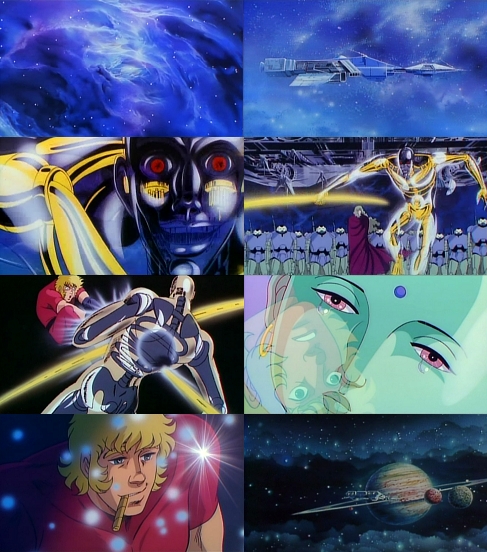 In closing, Space Adventure Cobra is a great example of that era in anime where you could make anything and, as long as you knew where you were going, could make it entertaining as well. It has all the hallmarks of high 1980s film aesthetic with a 1970s plot and character delivery. It’s like drinking Coke and rum together. Separately, they taste fine. But blended together, they compliment each other with the negatives of each being cancelled out by the positives of the other. A fine drink and a fine film to have while escaping the Trap Door.

The DVD I bought, as I mentioned, is the Manga UK DVD from 2008. This contains a subbed Japanese language track along with the Carl Macek dub. Unfortunately, it’s letterboxed and not anamorphic widescreen (For explanation of the two terms read this) There is a newer DVD available from Discotek Media, released in August of 2012, that uses a Japanese Blu-ray master as its source material and it is supposed to look amazing. That release also comes with the Macek dub and is anamorphic. If I had to choose, I'd get the US version. If you're stuck, the UK version is really cheap right now.