"All roads lead to Otakon." I've heard this phrase repeated by lots of anime bloggers, podcasters, and pundits, and this year's version of the annual Baltimore anime convention really drove home this message. Otakon isn't just a convention: it's an unforgettable experience, something that I find at no other con in the United States.

The Comic Cons in San Diego and New York are industry-centric affairs, in which fans serve only as passive spectators. Otakon is different.

The Comic Cons in San Diego and New York get lots of mainstream media attention for their massive attendance numbers and appearances from celebrities, but these conventions are industry-centric affairs, in which fans serve only as passive spectators to the latest Marvel film, DC reboot, or vaguely sci-fi-themed TV show. Otakon is different. Run by volunteer fans, Otakon is a weekend-long party, a chance for East Coast anime fans to get together and celebrate their shared fandom. It's a chance to be a part of something bigger than a simple anime club or local convention. Indeed, all roads lead to Otakon, because when you're looking for a connection with your fellow fans, you go where everybody else is. And everybody is at Otakon. Everybody from Internet anime giants Anime News Network to studio Madhouse founder Masao Maruyama to "Anime Anthropologist" Charles Dunbar to podcasters Anime World Order. More importantly, though, that "everybody" includes far less famous names. Friends. Members of your local anime club. People you've met at other conventions. Otakon pulls in people from all across the East Coast (and quite a few from out west), and the huge, varied crowds are what makes it such an amazing experience. At no other con have I felt as connected to the collective experience of American anime fans than at Otakon.

That said, the programming, the guests, and the other technical and organizational aspects of Otakon really aren't all that important to its success in anime culture. If the convention has a string of poor guests in the future, their attendance might drop a little, but their reputation as the be-all-end-all American anime convention will remain.

Luckily, Otakon has hit no such stumbling blocks. The 2012 convention featured a number of voice actors from the latest hit show Puella Magi Madoka Magica (Ai Nonaka, Christine Marie Cabanos, Lauren Landa, and Sarah Williams), the previously mentioned Masao Maruyama, Madoka and Fate/Zero writer Gen Urobuchi, and a bunch of music, fashion, and other guests either directly or tangentially related to anime. While I wasn't particularly looking forward to any of the selected guests this year, I think it was interesting to see so much representation from Madoka. As David and I mentioned in our podcast about the series, Madoka has been touted by some as a landmark show, something that may stand with the likes of Evangelion and Akira in terms of its influence on fandom. Surprisingly, despite a bevy of voice actors from both sides of the Pacific, the lead writer of the series, and a recent DVD/Blu-ray release all on display at Otakon, Madoka cosplayers seemed to blend into the crowd during the weekend. In fact, no costumes from any particular anime series stood out, which I see as a symptom of a fragmented, increasingly niche fandom. Of course, cosplay from the popular webcomic Homestuck continued to dominate most anime series, a curious paradigm shift I discussed in a recent Ani-Gamers feature.

Want to see more Otakon coverage? Want to check out the photos Ink and Evan took at the con? Check out our photo galleries and read our giant series of panel reports. Or, if you're looking for a full stream of Otakon 2012 content (including our upcoming interviews with voice actors Yuuka Nanri and Christine Marie Cabanos), check out our "Otakon 2012" tag search page.

One thing that distinguishes Otakon from every other convention in the country is its panels lineup. Since everybody who's anybody in East Coast anime fandom makes the yearly trek down to Baltimore, Otakon is able to pull in some of the best anime con panelists, from the versatile Mike Toole ("Dubs That Time Forgot") to the convention veteran Walter Amos ("Hetalia History") to the prolific Charles Dunbar ("Beyond Castles, Forests and Bath Houses: Politics and Philosophy in the Films of Studio Ghibli"). We discussed the panels we attended at length in our panels write-up, so I won't get into the details here. However, I will mention that there were a few odd panel scheduling choices. I met with a number of "dead zones" where there was nothing I was interested in, followed by two or three panels I wanted to go to all at the same time! (In fact, Otakon scheduled Daryl Surat and Gerald Rathkolb of Anime World Order against each other AND against their friend Mike Toole, whose panels attract a similar audience.) As someone who has worked on panel scheduling in the past, I understand the difficulties in the task, but some of the mistakes — like the AWO/Mike Toole mix-up — seem pretty obvious. It's also worth throwing in here that, as Kate from the Reverse Thieves pointed out throughout the weekend, the Artist's Alley this year was pretty excellent. I always try to do at least one quick round through the alley at every con, but I rarely buy anything (alas, shirtless Naruto/Doctor Who crossovers just aren't my cup of tea). This year, however, not only were there a bunch of artists who I legitimately considered purchasing from, but I actually bought something from one of them. To be more specific, I highly recommend Emily Smith (from whom I bought a very cool print of a surreal cityscape) and "Mike Hates Meathook" (who makes robots out of old video game parts)!

I can talk all I want about how great the programming and the guests are at Otakon, but nothing compares with the true experience. From cruising into Baltimore with Ink and All Geeks Considered's Vinnie, blasting Soulja Boy's magnum opus, "Anime," to stopping for a conversation with a group of complete strangers I met at a panel, there's nothing quite like Otakon. I'd claim that it's because of the 32,000 people who streamed into the Baltimore Inner Harbor this year, but numbers don't tell the whole story. Otakon is an experience like no other. I've loved it every year I've been, and this year was no different. All roads really do lead to Otakon, and I wouldn't have it any other way.

This year we brought back Otaku Bingo, our cheeky dig at the silly shenanigans of anime con attendees. Our bloggers participated, as did some of our friends and readers. Below we've included some scans of the Bingo cards from the participants. 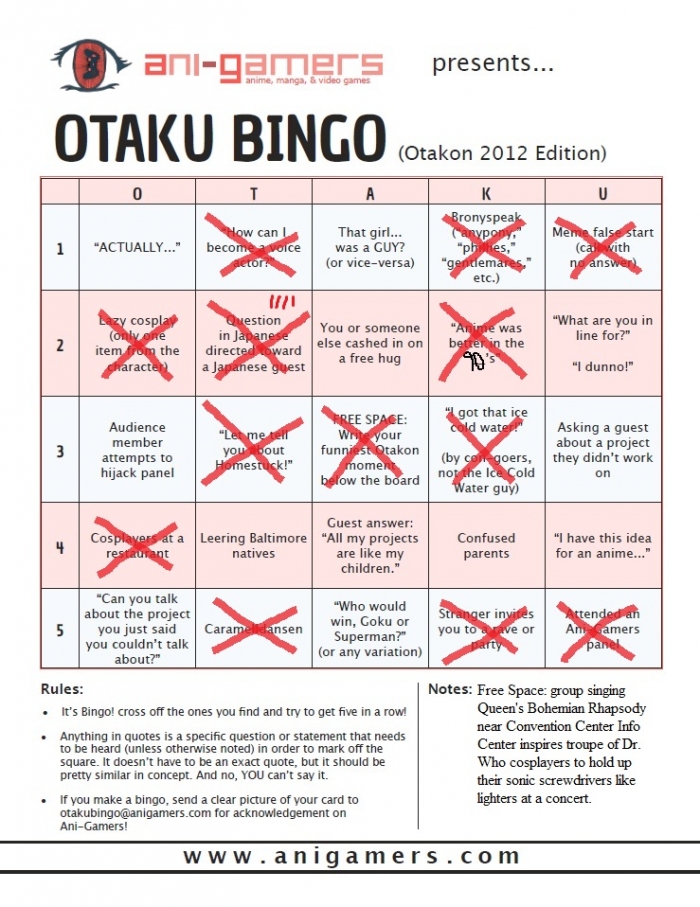 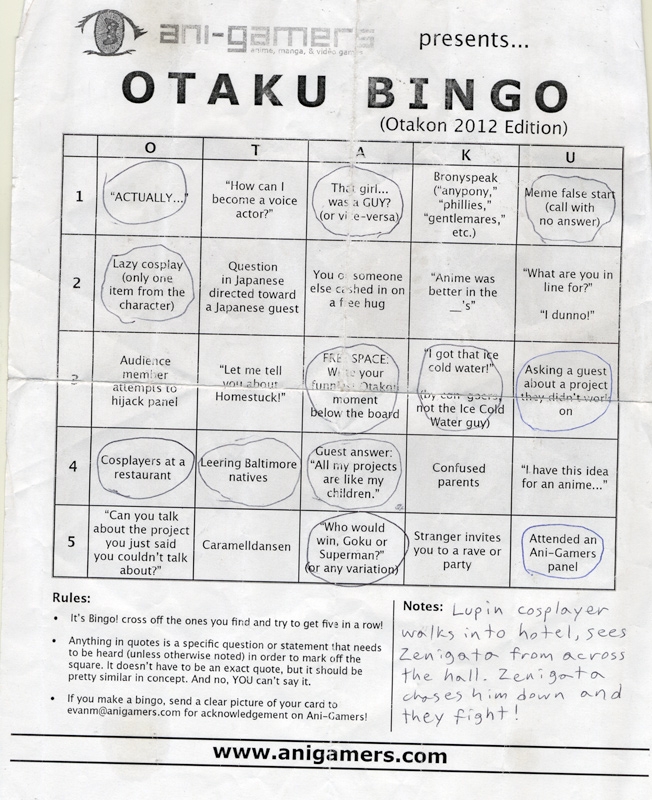 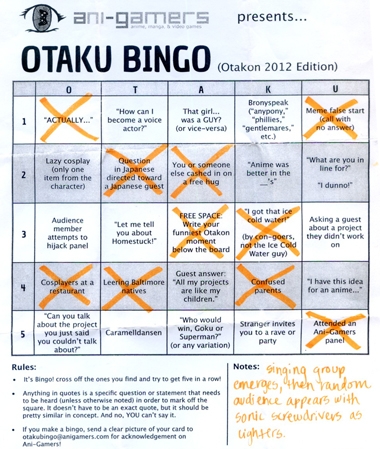 Before I finish up here, I'd like to remind you that Otakon currently has a panel feedback form up on their website. We ran two panels — "Fandom & Criticism: The Art of Active Viewing" and "The Changing Faces of Anime" — and we would really appreciate you heading to the Otakon site and letting their staff know what you thought of our panels. This form is used to decide which panelists to invite back to the convention, so leaving nice feedback will increase the likelihood of seeing another Ani-Gamers panel at next year's Otakon!