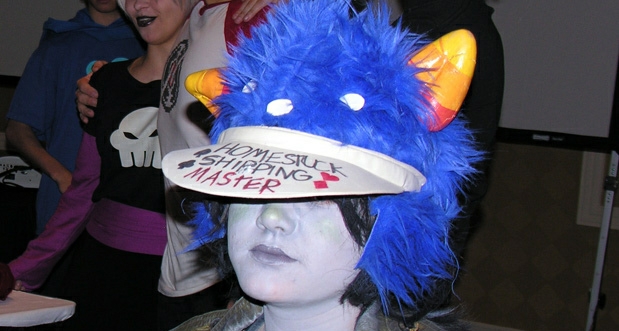 It was a busy Friday morning at the Hynes Convention Center in Boston. Sitting in front of a Dunkin Donuts in the adjoined Prudential Center Mall with Ani-Gamers' David Estrella, eating my hastily acquired breakfast, I watched hundreds of costumed fans walk past, crowding their way into the nearby Sheraton to pick up badges for Anime Boston 2012.

On a whim, we decided to start counting the cosplayers. How many would be from anime and manga, and how many from video games, webcomics, movies, and other non-Japanese-cartoon-related media? The answer, we quickly found (in our very non-scientific study), was that the majority of cosplayers at Anime Boston aren't cosplaying anime anymore. Only 36 out of 86 people — 42% — were actually dressed as anime and manga characters, despite the word "anime" in the event name!

Back in the lobby of our hotel, David and I sat down for a break from the packed events schedule of Anime Boston. We started up a conversation with some nearby attendees. I asked them what their favorite events and cosplays of the weekend were, and one girl had a very important comment. "I think the most popular costumes are Adventure Time, Homestuck, and My Little Pony," she said.

Where conventions just two or three years ago were dominated by Hetalia, today they are defined by Adventure Time, Homestuck, and My Little Pony.

Those titles don't sound very Japanese, and that's because they're not. Adventure Time is Pendleton Ward's animated comedy series on Cartoon Network, at once a clever kids show and a loving send-up to Dungeons & Dragons and retro video games. Homestuck, Andrew Hussie's hulking beast of a webcomic, is an ambitious, serialized, multimedia experience, featuring MS Paint-style art, Flash animations, and even interactive panels. My Little Pony's recent reincarnation, the animated series Friendship is Magic (created by Lauren Faust, one of the minds behind the well-received Foster's Home for Imaginary Friends), has gained a strong — and somewhat perturbing — following among adult males, who call themselves "bronies," a portmanteau of "bro" and "ponies."

Where conventions just two or three years ago were dominated by Hetalia, a Japanese webcomic and anime series that focuses on the wacky comedic exploits of anthropomorphized World War II nations, today they are defined by the three series listed above, all created by Americans, not Japanese. There's nothing wrong with Western cartoons — in fact, I am a fan of a lot of them. However, when a convention explicitly calls itself an "all-anime convention," as is the case for Anime Boston, it's worrisome to see such a huge sect of cosplayers supporting non-Japanese media.

Let Me Tell You About Homestuck

Two months later, I sat in a crowded panel room in the Doubletree Hotel in Somerset, NJ, surrounded by teenagers in costumes I didn't recognize, yelling phrases I didn't understand. It was like going to an anime convention for the first time, not fully understanding this bizarre culture that surrounded me. But I was already at an anime convention: AnimeNEXT 2012. This was the Homestuck panel, in which fans and cosplayers of Hussie's comic answered audience questions in-character, eliciting countless laughs (and character-based sexual innuendos) from their excited questioners. Thinking that full-on immersion would be the best way to explore Homestuck's rabid fanbase, I stood up to ask a question of my own. "I've never read Homestuck before," I said, resulting in an excited intake of breath from all the hardcore fans in the room. "Why should I read about your adventures?" In unison, with irrepressable glee, the whole room erupted in one phrase: "Let me tell you about Homestuck!" Further answers were mostly jokes. One girl suggested that the awesome costumes were the best part, another suggested the relationships. One panelist flippantly replied, "watch the anime, but not the dub. They didn't get a good English voice cast for it." Homestuck, of course, has no anime adaptation, but the response's reference to anime culture is telling.

Anime is a social vector for these kids, not a primary fandom. They meet through anime conventions, but they don't define themselves based on it. However, their energy, their excitement in "telling me about Homestuck," is exactly what anime fans once had. Where has that energy gone now? Why are the young fans, who once excitedly told me that I was a bad person for not watching Fullmetal Alchemist, reading an American webcomic and not Japanese comics?

It's quite simple, actually. Anime has failed as a popular medium (at least in the United States, though accounts suggest native Japanese fandom has a similar problem).

In the game of media natural selection, the goal of every popular medium is to perpetuate itself, like a contagious parasite, spreading from host to host. In this, anime has failed. It has failed to adapt to its environment, failed to sustain itself. It has inbred to the point of sterility. Yes, even the best anime series and films have failed, monumentally so. Redline is brilliant, the new Lupin III is bold, Kids on the Slope is beautiful, but they've all failed. They thrive on nostalgic warmth from the established fans of their medium, and fail to create something exciting for new fans. They don't reach out and grab new fans by the collars like they used to. The worst of the worst — the moé and mecha genres — pander directly to established hardcore anime fans, seeking quick profits rather than sustained engagement. Yes, anime has failed, and its competitors have not sat idly by.

The Legend of Korra, the latest in Nickelodeon's anime-style Avatar: The Last Airbender franchise, represents the flexibility in the American animation industry. Despite their relative conservatism, corporations like Nickelodeon are willing to co-opt Japanese animation sensibilities to sell their product to more kids and teenagers. The anime industry, on the other hand, seems dead-set of focusing inward rather than innovating. One of the girls I spoke with at Anime Boston described the reason for fans drifting, saying that the non-anime series appeal to fans who want cartoons to be smarter and to have more in-depth stories. These are all things anime provides, but as a medium it's simply not selling itself well enough to potential fans. Yes, the problem originates in Japan, but what can conventions do about it? Well, first off, they can stop trying to build walls between anime and other media. Yes, the rise of non-anime media at "anime" conventions means that these events are being diluted, but it's counterintuitive to actively block these fans from participating in the fandom experience. Anime Boston and Otakon do not allow (or at least strongly discourage) events unrelated to Japanese culture, while AnimeNEXT allows anything (though they prefer anime-related panels). As much as the watering-down of anime cons bothers me, I think we would be much better served by re-integrating these fans and bringing them back into anime fandom proper, as opposed to telling them that they're unwelcome.

Anime fans should remember their role as evangelists for their medium.

That brings me to the second, more personal arm of my solution. Anime fans themselves should remember their role as evangelists for their medium. Homestuck fans gravitate to the webcomic for many of the same reasons anime fans gravitate to Neon Genesis Evangelion or Fullmetal Alchemist. If you have friends who used to be into anime or might like to check it out, remind them of why anime is so great. Tell them about your favorite series or sit them down for a movie night. Anime still has some life in it, and despite my dire claims, I do think it will be able to eventually bounce back from the slump it's in right now.

"Let me tell you about Homestuck!" The warm embrace from these would-be anime fans was disorienting at first, but the more I consider it, the more it inspires me to fire back with my own, equally welcoming reply:

Let me tell you about anime.