The more that Ghost in the Shell becomes a “media” franchise, the more I find myself looking backward to Masamune Shirow’s earlier works. First I went to Stand Alone Complex, and then I went further to the original film. When I got there, I looked even further on and rediscovered Dominion Tank Police. With the bank holiday here in Ireland approaching, I thought to myself, "Why not a little bit more with NEW Dominion Tank Police?"

If you’re interested in the backstory of Dominion, see my review of it on Ani-Gamers, then come back here. Back? Great. So things are much the same in New Port City for Leona, Al, Lt. Breten, and company. The smog’s still trying to kill them, the Puma sisters are still criminals, and criminals in general still think they can beat tanks. Now, however, they have the Dai Nippon Gaiken Corp to deal with. Think of them being a much lower-rent version of Bubblegum Crisis’ Genom with less control over their situation and more Dr. Claw from Inspector Gadget. They are not the masters of the world they think they are. Plus, when you’re beaten by a crowd of unemployables like the Tank Police, you can’t be that good. The beginnings of the show are largely the same as the original OVA. But with the second and third episode, director Noboru Furuse shifts the emphasis toward Dai Nippon, and we know they will be our antagonists. 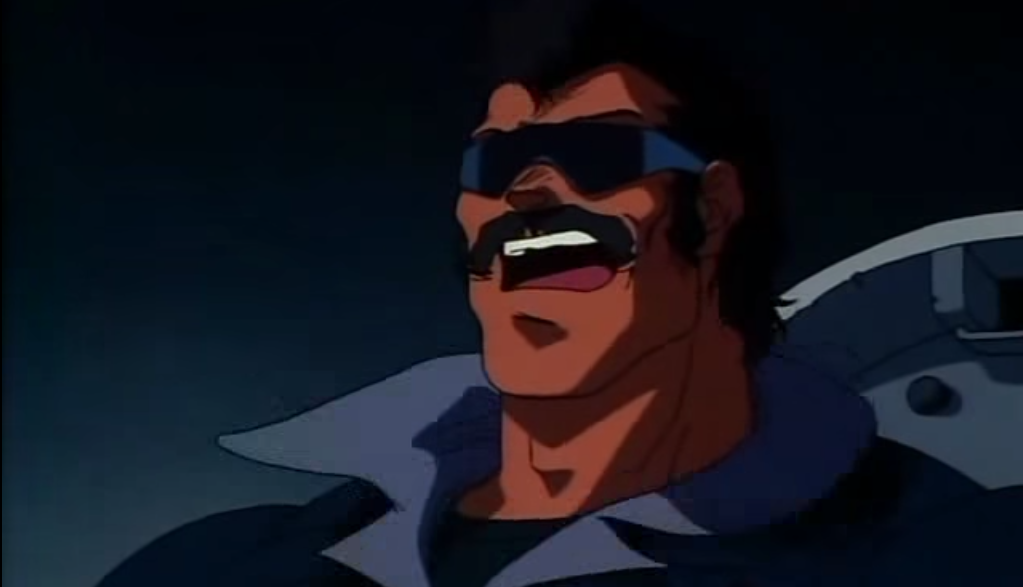 Where the previous OVA has elements of sci-fi and social commentary amid the comedy, this series focuses entirely in the absurd and often bone-headed tactics of the Tank Police. Leona has learned nothing and still thinks it’s fine to drive through funeral processions at full speed just to catch a criminal. She’s more prone to outbursts and screaming at people. Al seems to have given up on reining her less excessive traits, and he himself has become a more confident person—no longer afraid to challenge his superiors. Lt. Brenten is the same gung-ho gun nut he was in the first show, and we have the usual crew in the background, including the Chief who still has blood pressure problems. Along with the Chief having a new assistant, Sophie, differences this time around include a greater emphasis on action, specifically mech and car chases; dialogue-driven drama and jokes; and a less grounded sci-fi world in favor of 90’s-style anime science and tech. 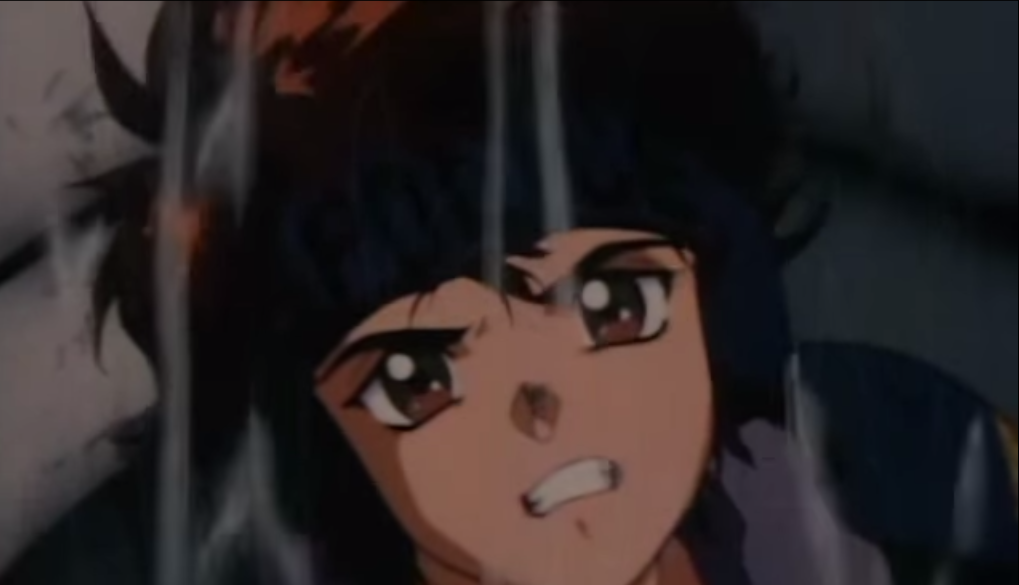 The tone of the show is a bit different too. It’s harder, more cynical, and a lot less interested in higher ideas. The world is seen to be a bit more realistic in that politicians can be bought and sold, people tolerate the Tank Police but don’t mind protesting their existence, and the Tank Police themselves are starting to think they’re a law unto themselves. Brenten and the squad regularly taking off despite the chief screaming at them to stay put is played for laughs, but when you think about it, a bunch of nuts with military equipment going around destroying the city on a daily basis would start to dominate the city’s finances after a while. Then again, the squad remarks at one point that Dai Nippon’s taxes to the city pay for a ton of the city’s budget, so I say take for all they’re worth, guys. One thing that I missed is that, in this version of the story, Buaku is no longer around. While not a required element, he gave the first series a much needed counterpoint to Leona and Al. Without him, the Puma sisters engage in petty crime and general mayhem. They thrive in the city, however, constantly having an excuse for every crime and misdemeanour and a smart ass answer for Leona on every subject. They still dress in next to nothing, but I’ve come to expect it of them. Since they’re androids, they don’t have as many scruples as humans do. 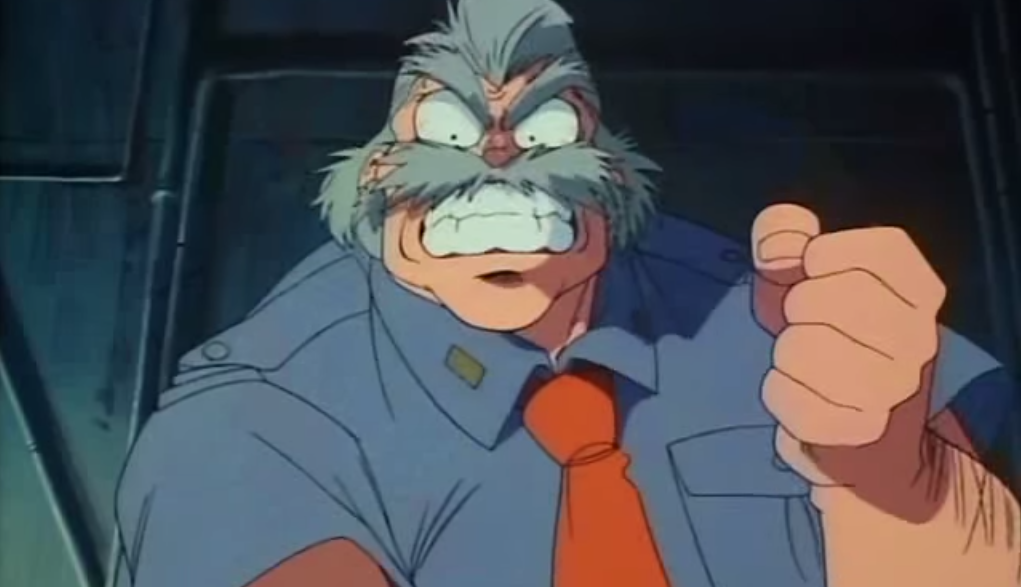 The main villains, Dai Nippon Gaiken and their officers, fill that rare role in a comedy: a group of people so heinous that they don’t see and cannot plan for the walking train wreck that is the Tank Police. Every evil scheme—drugs, enhanced slaves, assassinations—is destroyed by Leona and Al or Brenten and Lovelock as they charge into the scene. What’s brilliant about the villians is that they never join in the hysteria that accompanies our heroes when they arrive somewhere. The villains remain, just being evil and smoking cigars in Genom-style boardrooms while plotting to keep making lots of filthy money. No, really, that’s exactly what they do. In doing so, they become such stock, cardboard villains that we don’t feel the least bit sorry for them when a building is destroyed or one of their numbers is arrested. That said, their actions are not done for laughs. In what I think is one of the only failings of the show, these villians are not shown to do anything villainous unless the Tank Police spot it.  In fact, the only people who get killed, in the strictest sense of the world, by them are the good guys. One is an off-screen cop and the other is a mate of Leona’s. Both times there’s no laugh to be had in them being defeated. Afterwards, sure, there’s the obligatory shot of Al and Brenten holding Leona back to stop her from slapping someone. But when the show knows not to have a laugh, it doesn’t. 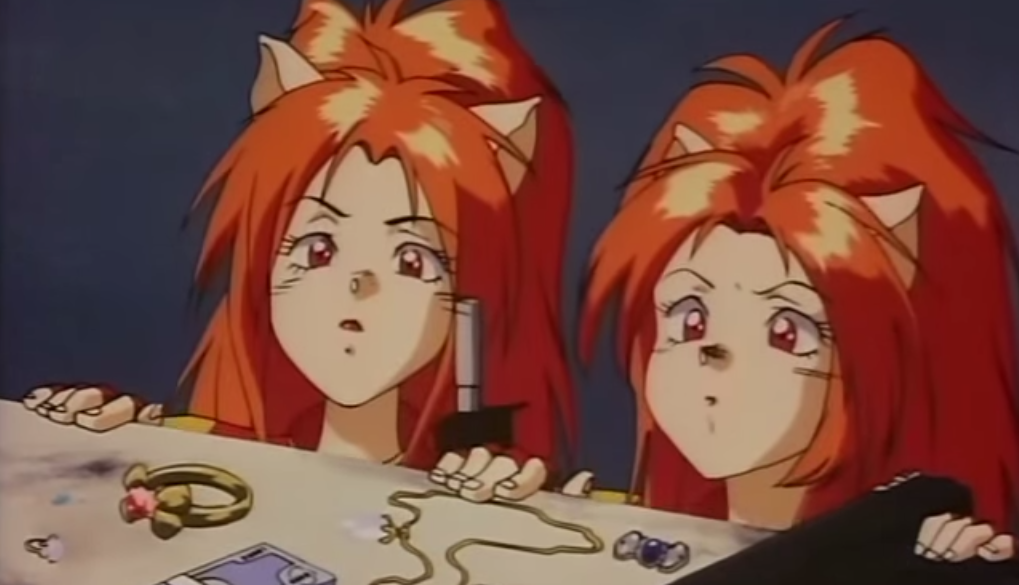 I listened to this in the original English dub, commissioned by Manga Entertainment way back in the day, because, if you can listen to an original Manga dub, why wouldn’t you? It takes massive liberties with the script, puts lots of bad language into it, and has so many instances of the word “bloody” said by people with an American accent that it’s hard to choose something you don’t like about it. Michael Bakewell is back with another stellar voice directing effort. Toni Barry returns as Leona along with Sean Barrett as Brenten, Jess Vogel as the Chief, and Alison Dowling as the Puma Sisters. The Japanese dub is excellent, but there’s something more fist pumping about a bunch of English speaking people pretending to be angry and shouting when they’re really not.

I can’t say which of the two OVAs I prefer. The original has its world building and its hard-fi look along with the jokes. New Dominion has absurd comedy, high speed chases, and Stuff. Blows. Up. … a lot. So it’s up to you which you like more. Please remember that Maiden Japan’s recent release only includes the Japanese track and not the Manga dub. The older DVD is getting harder and more expensive to find, so start asking yourself which disc you’re picking up of this escapee from The Trap Door.