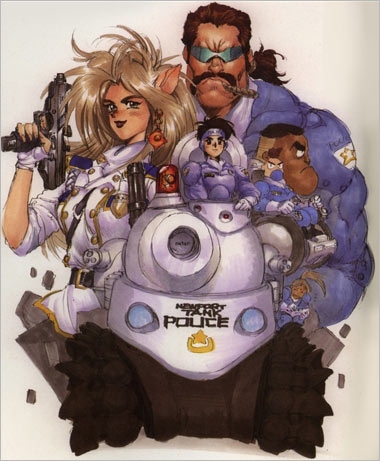 Should enthusiasm be punished? Certainly it’s okay to like your work but not at the expense of life and limb. But you see, Leona Ozaki doesn’t see it that way. She loves her work and she would never do anything to hurt life or limb. That is, HER life or limbs. Other people’s, not so much. You see, Leona works in the Tank Police in Newport City and she LOVES her police tank Bonaparte. Welcome to the future: smog clouds of killer bacteria, urine as a commodity, sex-droids who carry machine guns, and the world of Dominion Tank Police.

Now unleashed on the streets, Leona and Al frequently cause heart and blood pressure problems for their immediate superiors.

The brainchild of noted manga author and artist Masamune Shirow, the creator of Black Magic M66, Appleseed, and most famously, Ghost in the Shell, Dominion is set in the future Newport City. The city has a smog field over it like the shield in Highlander 2 except this smog will kill you if you stay out in it, eventually (it's got some kind of killer bacteria in it that's never fully explained). And with every future sci-fi that’s all shiny and nice, with every kind of advance we make as a society, we still retain the old vices. Crime is still with us. But as with everything in anime, where there are out-of-control ways of committing crimes, there are also out-of-control ways to FIGHT crime. Now, if I were any mayor or governor of a city or town and the police came to me and said “Mr. Mayor, the crime in the city is out of control!,” I wouldn’t decide that the best thing to stop this virulent plague would be to put armored tanks on the streets complete with live ammunition. This is, of course, a decision that the Mayor of Newport comes to regret, because the "Tank Police" do as much damage as the bad guys do. Into this insanity comes Leona Ozaki. Leona has just transferred into the division from the Motorcycle Corp. And things are going great until a tank she was in is destroyed. She is so upset by the destruction of her beloved Bonaparte (yeah, she even named it) that she decides to rebuild it. Now, a much smaller, dumpy little machine, it’s perfect for Leona and her co-pilot and partner Al. Now unleashed on the streets, Leona and Al frequently cause heart and blood pressure problems for their immediate superiors, Lt. Brenten, and their boss, the Chief. 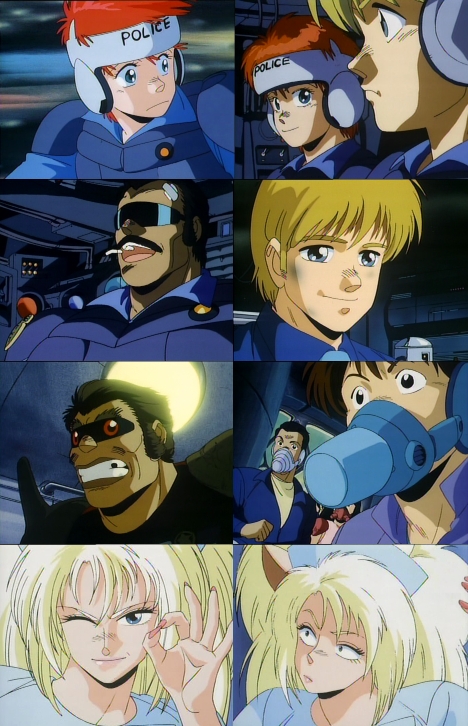 Even though it’s over 20 years old now, Dominion Tank Police is one of the most easily accessible of Masamune’s and it’s really short. To explain: The series takes the naturally wacky sensibilities of the original author's work and amplifies them. The tank police are completely crazy. Lt. Brenten (who in the English dub is voiced perfectly by Sean Barrett) is the best gun nut you’ll ever see and regularly toys with perps using knives and bombs, the Chaplain thinks nothing of shooting people, and the Chief wants the Mayor to let them use nuclear weapons instead of bullets to catch criminals. Into this goes Leona and Al who, I feel, get unfairly picked on by their bosses. But Leona is as much a hothead as Brenten is and it usually gets her into trouble. Luckily Al is the counterpoint to her and frequently pulls her back from the fire. Or not, as sometimes is the case. The Chief feels like an American police chief but filtered through the Flintstones school of design, constantly looking like he’s going to pass out watching Brenten play with suspects like it’s a game show but with knives and grenades. You’re always waiting for him to jump up and down in the air when he’s arguing with the Mayor. 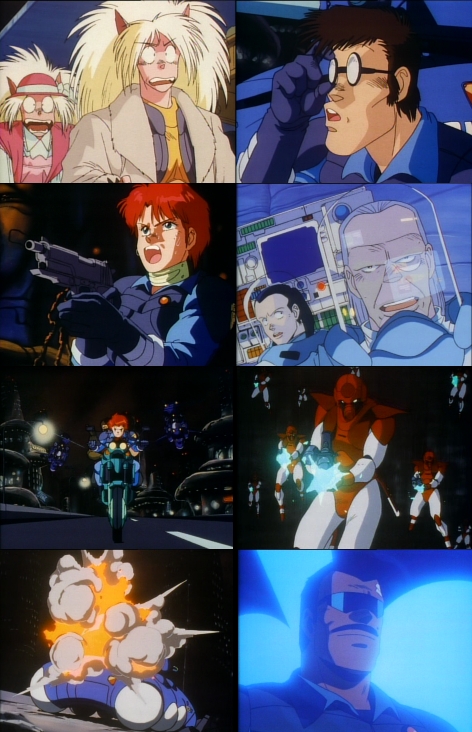 Buaku is an opportunistic, mid-range criminal but his arc turns deep when we learn his past. But my favorite characters have to be the Puma Sisters, AnnaPuma and UniPuma. Originally supposed to be sex androids, they developed beyond that function and now commit crimes and, generally, are social malcontents. They usually dress in practically nothing, have cat ears instead of normal ones and have access to military grade firepower. They are catty (no pun intended) with people and themselves and think nothing of robbing people blind or destroying public property. If they are not performing striptease to distract the Tank Police, then they are spraying said police with machine gun fire. You get the sense from the sisters that they aren’t really being overtly bad but that they don’t want people to stop them from what they are doing. They really are the most childish of the cast in a cast that is totally childish. 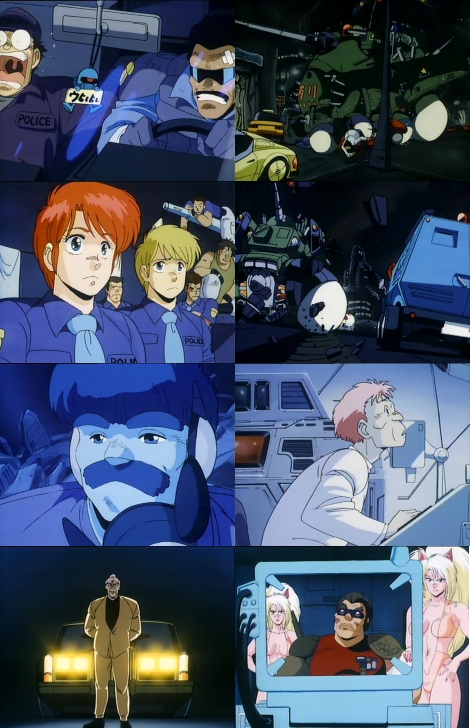 The series takes a somewhat philosophical view in proceedings when needed (a petty criminal’s quest to discover who he really is, the ongoing bacterial cloud thing) and director Koichi Mashimo (creator of the Girls With Guns series and founder of Bee Train) keeps things going with a nice pace. The best times in the show are where things are moving at a glacial pace, as described above, or when things are moving so fast that it takes you a second or two to recognise that the criminals the police are chasing are dropping flat steel plates that inflate into ramsets. Only after you’ve watched it do you realise they just got away with the plates turning into giant, multicolored penis shapes that stop the tanks in their tracks. Also, the art designs make the future look really interesting with the buildings sporting 1980s New Age, organic design and the people using non-Industrial designed objects for displays, cars and handheld objects, i.e. form over function as their practicality can be called into question. Questions abound about offscreen notions: what’s the repair bill for the city for Bonaparte's tank tracks ripping up the streets (the other tanks run on what looks to be huge coaster wheels) as it speeds around? What’s the repair bill for the Tank Police in general? How is Brenten, or even the Chief for that matter, still in charge? Why the hell does the Mayor keep tolerating them? 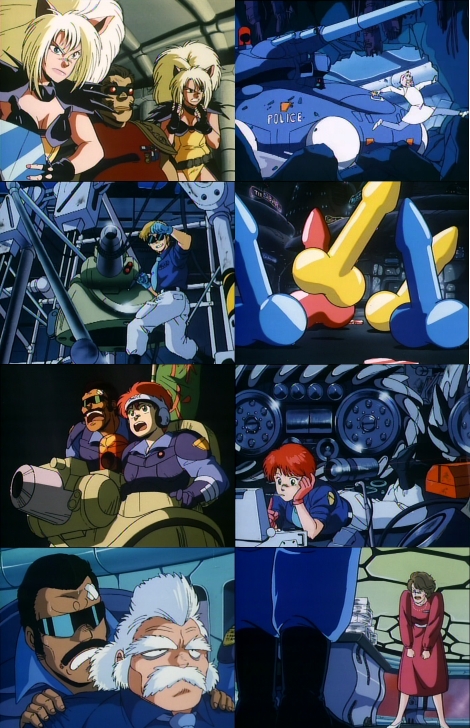 A great mixture of future imperfect, firepower, and absurdist humour.

The dub is an interesting topic to tackle. Another Central Park Media/Manga production, this time they decided to replace the music track with their own, resulting in a kind of weird hybrid with a '90s Eurobeat opening theme and Vangelis-style episode themes. Both music tracks have their strengths and weaknesses, but your actual mileage may vary. The English voice cast trumps the Japanese voice cast for their sheer enthusiasm. As mentioned Sean Barrett plays Brenten as an out-of-control authority figure who just wants to kill lawbreakers, much like Isao Ohta in Patlabor (LET ME FIRE THE GUN, SIIIRRR!!!!). Toni Barry as Leona is good but she kind of does go a bit flat at times. Alison Dowling plays the dual roles of Anna and Umi and she would reprise her role in the sequel series, New Dominion Tank Police. She has the snobby, sneery attitude down pat, especially in her interactions with Leona. 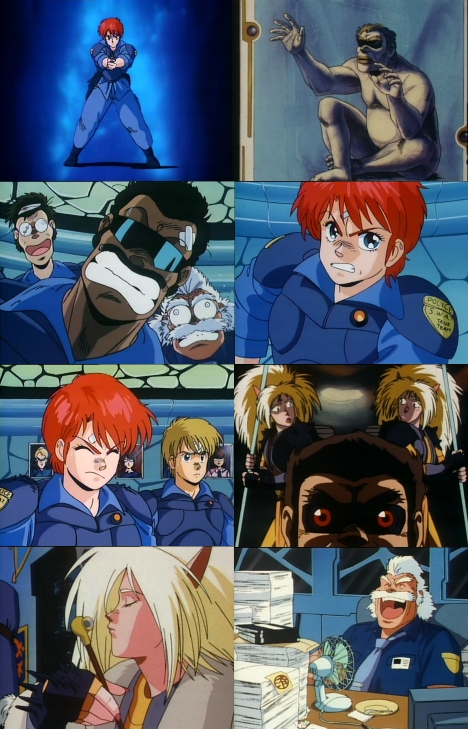 Speaking of Ohta, in many ways, Dominion IS the counterpart series to Mobile Police Patlabor. Both feature casts of unemployables that work in high-tech police departments, have a female lead character, and both are set in the future. But whereas Patlabor’s moments between cases are quiet ones, Dominion just keeps the crazy button on. I’d say if you mashed the cast of Animal House, Aliens and Beverly Hills Cop together, gave them the equipment from Avatar and dropped them into the Los Angeles from Blade Runner, you would get Dominion. At a time when people complain that there is so much dreck in anime, I just wish more people would find this and maybe ask someone like Discotek to licence-rescue it. A great mixture of future imperfect, firepower and absurdist humour. It’s a great little diversion in life, really. 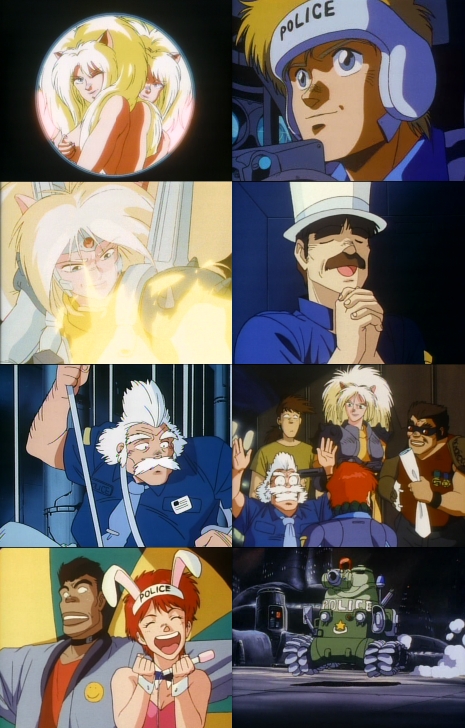 This is a really hard series to find now with Amazon and eBay returning results with high prices. My advice is, if you can play back PAL discs, to search Amazon UK as they have both OVA series still listed for reasonable dough. Shirow’s manga and its own sequel series is getting harder to find but can still be found online.