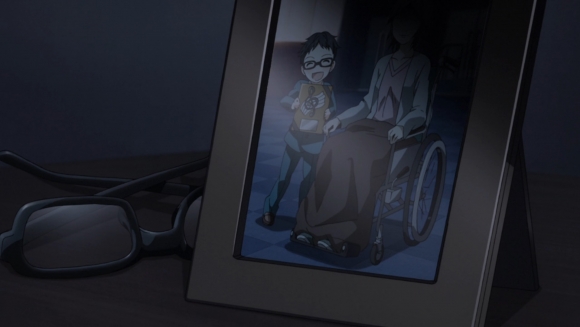 The world of Your Lie in April promises one simple but very effective premise—a balance of color and lack thereof as measurement of an individual’s passion. According to the series, the surrounding world blossoms with color when viewed through the eyes of someone in love. Without that spark of infatuation—betrayed by a particular twinkle in the beholder’s eyes reflective of enchantment with something or someone—every garden, every mosaic, every sunset is but different depths of black and white. While the show doesn’t exploit this notion nearly enough, there are a series of images in Episode One worthy of pause and awe for their contrast and all that conveys.

Kousei Arima, trained from a very early age by his mother to be a classical pianist, is currently a fourteen-year-old in middle school. His father is currently away on business, and since Kousei’s mother passed away three years ago, the only accompaniment he has in the house is a piano that refuses to speak to him any longer. It’s a grand, dark thing that’s covered in dusty books in the same dim room which holds Saki’s memorial shrine. When Kousei comes home from school, he enters this not monotone but very cold, color temperature-muted room and says “I’m home.” By the way the shots are juxtaposed and the camera is positioned, it’s as if Kousei is addressing the piano. 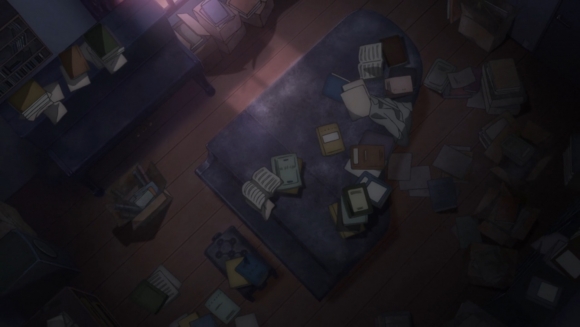 Kousei hates the piano. He lost his ability to play at eleven years old, after his mother passed, and hasn’t played a piece since (save for checking the sound of select bits and bobs of pop song transcriptions he does for work). Mired in regret for not being able to fulfill his mother’s desire for him to reach the prominence of the European stage as her successor, Kousei clings to that grief as if it’s the only palpable essence his mother left behind. To him, life is a monotone existence. The physical scars from his mother's beatings might have healed, but her verbal abuse fills Kousei’s empty shell with an ugly, perpetually echoing resonance.

How ugly? First let’s consult the nature of the images the series uses to portray Kousei’s training as a young boy with mother. Saki keeps time with brusque shakes of her cane from her wheelchair. Kousei plays mechanically, his face hidden, at the piano bench with a booster box underneath the pedals so his feet can reach. A wide shot reveals Saki sitting behind Kousei in a position reminiscent of a carriage driver behind a horse. A pale, beaten child, colored but by cuts red with hurt and eyes blue with tears, forces a smile while looking up and clenching a leg of his shorts with his right fist as he promises to make his mother’s dream come true. An overbearing, larger-than-life upwards pan reveals Saki's legs, rigid in the wheelchair, and her cane thrust maliciously forward. And then there’s this. 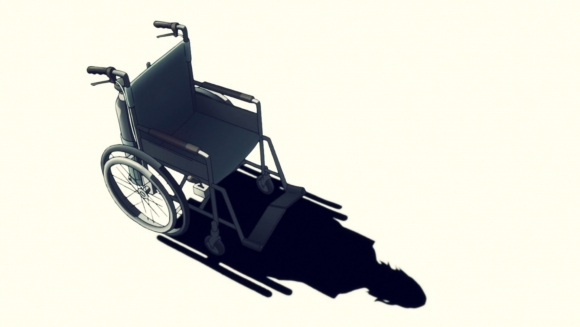 Contrary to everything in the episode thus far, even the muted shrine/piano room, those few images just described are purely portrayed in monotone and shadow. Why? Because this world Kousei recollects, this time ingrained within his memory, is colorless … loveless. But at the same time, it’s all that Kousei seems to have known of his mother, so her wish and the steps she took to make them come true are all he has to cling to. This is why the ending shot of the “empty” wheelchair is so important. Did you notice? Isn’t that shadow a bit more than it should be? And doesn’t Saki’s ghastly shadow, coupled with the wheelchair's, resemble, if even only faintly … suggestively, a piano?