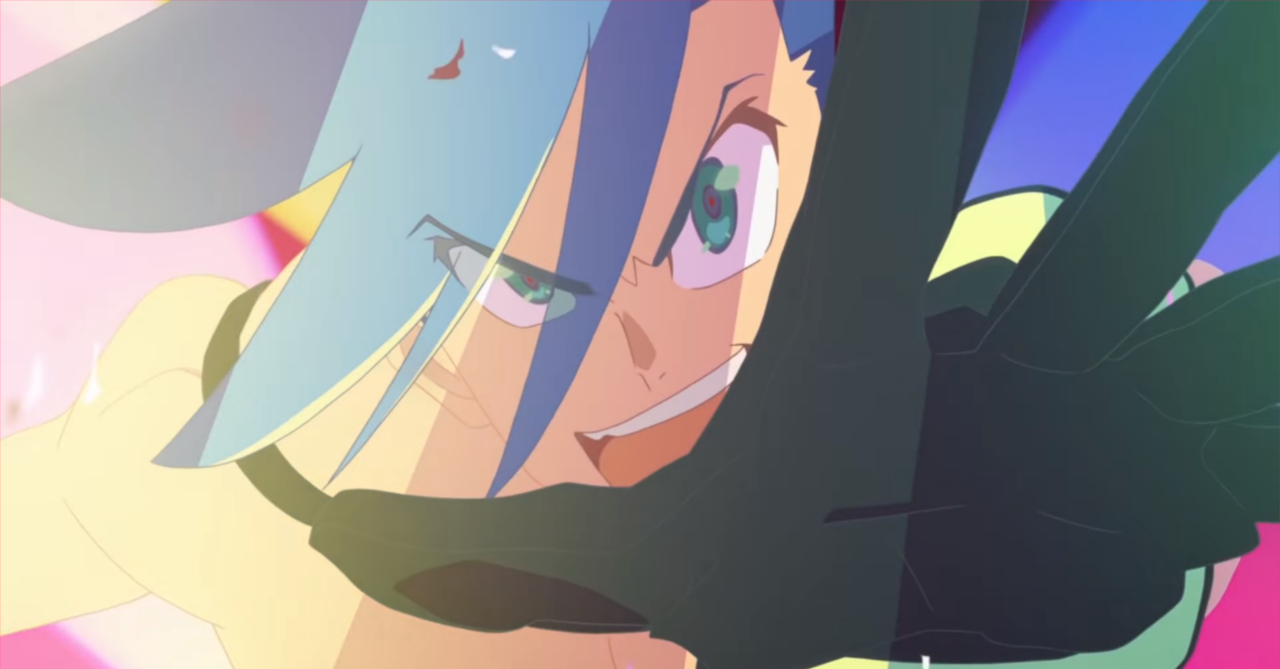 During a live stage interview promoting his directorial debut, the 2004 anime Dead Leaves, Hiroyuki Imaishi was asked whether he went a little “too far” with the film, which runs for roughly 50 minutes of nonstop action and features a character with a drill penis. “No,” he replied, “being halfway is the worst.”

Fifteen years later, Imaishi has gone from cult favorite animator to superstar director — helming Gainax’s comeback hit, Tengen Toppa Gurren Lagann, and Studio Trigger’s breakout TV debut, Kill la Kill. Both series are also the result of a collaboration with screenwriter Kazuki Nakashima (Batman Ninja). Imaishi’s solo works, including Panty & Stocking with Garterbelt and Space Patrol Luluco, are brilliant in their own way, but Nakashima’s sensibilities perfectly balance the Imaishi insanity by blending in a sly, tongue-in-cheek self-seriousness. When fans think “Studio Trigger,” the studio founded by Imaishi and his buddies, they are often thinking specifically of Imaishi’s works and, even more specifically, of the Imaishi-Nakashima collaborations. Promare, screening this week in US theaters, is the third such project, and the first original feature film from the pair. It’s a bold, high-octane action-comedy from a tight-knit team who have proven time and time again that there’s no such thing as “too far.”

Everything from characters to backgrounds are rendered in bright, flat swaths of color. The result is a series of kaleidoscopic action scenes, with multicolored, serpentine flame effects framed by dynamic moving camera work.

In classic Imaishi-Nakashima fashion, Promare is a story of stark contrasts. Gurren Lagann gave us humans and beasts, spirals and anti-spirals, while Kill la Kill pitted sentient clothing against freedom-fighting nudists. Promare follows a group of firefighters in a world populated by both regular humans and “Burnish,” mutant humans who can control fire. After a tense intro establishing the backstory of the Burnish, the film dives right into its first action set piece, wherein the “Burning Rescue” team face off against the terrorist organization “Mad Burnish.”

What follows is a world-rending battle of mecha-equipped firefighters and superpowered arsonists. The protagonist, Galo, is a hot-blooded, air-headed firefighter with more than a passing resemblance to Gurren Lagann’s Kamina. His Burnish counterpart, Lio, starts off encased in menacing armor clearly inspired by Marvel’s Venom, but hiding underneath is a dashing pretty-boy. Lio begins the story as a clear antagonist before a series of twists rearranges the alliances and turns villains into heroes and vice-versa.

That’s not to say Promare is a particularly twisty or complex story; like most things from its director-writer pair, it’s pretty straightforward and easy to predict. The fun is in watching its larger-than-life characters butt heads (sometimes literally) and ratchet up the tension before releasing it in massive action scenes (backed by a booming pop score from Kill la Kill’s Hiroyuki Sawano, I might add). 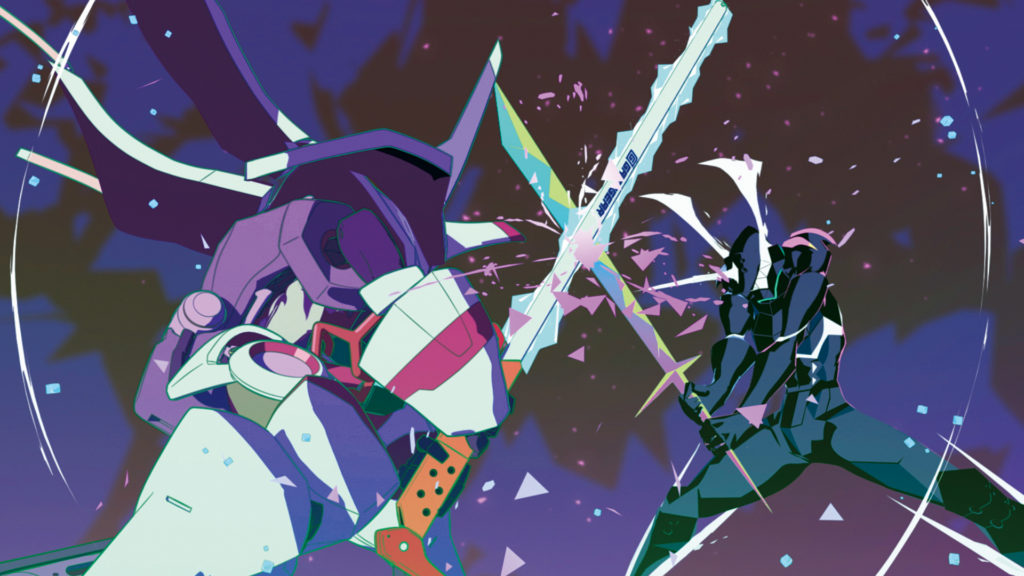 Those fights, in particular, represent a new direction for Studio Trigger, which has historically focused on hand-drawn 2-D animation. Promare, while officially a Trigger production, features large portions animated by their sister CG studio Sanzigen. Binding the 2-D and 3-D together is a brilliant design decision inspired by the flattened cartoon art of Panty & Stocking; everything from characters to backgrounds are rendered in bright, flat swaths of color. The result is a series of kaleidoscopic action scenes, with multicolored, serpentine flame effects framed by dynamic moving camera work. It’s sometimes hard to parse foreground from background when things get particularly crazy, but at its best Promare is an absolute visual feast — one that looks like virtually nothing else in Japanese or even international animation.

Compressing the power creep of an Imaishi-Nakashima show into two hours transmutes an already intense experience into a dizzying collage of punching and yelling and more punching.

In keeping with Nakashima tradition, Promare’s simple action-centric facade also hides some more serious themes. The most obvious one finds its expression in the Burnish, whose spontaneous emergence years ago sparked mass chaos and death. In response, a police force called the “Freeze Force” tracks down innocent Burnish and locks them away. Promare is a Japanese movie, but it’s hard not to make the connection with United States’ immigration secret police, coincidentally enough named “ICE.” Later the film reveals the true villain’s eco-fascist machinations, and what it offers in response is a perfectly pure-hearted, idiotic kind of radicalism: just do the right thing, period, even if you have to burn everything down to do it. 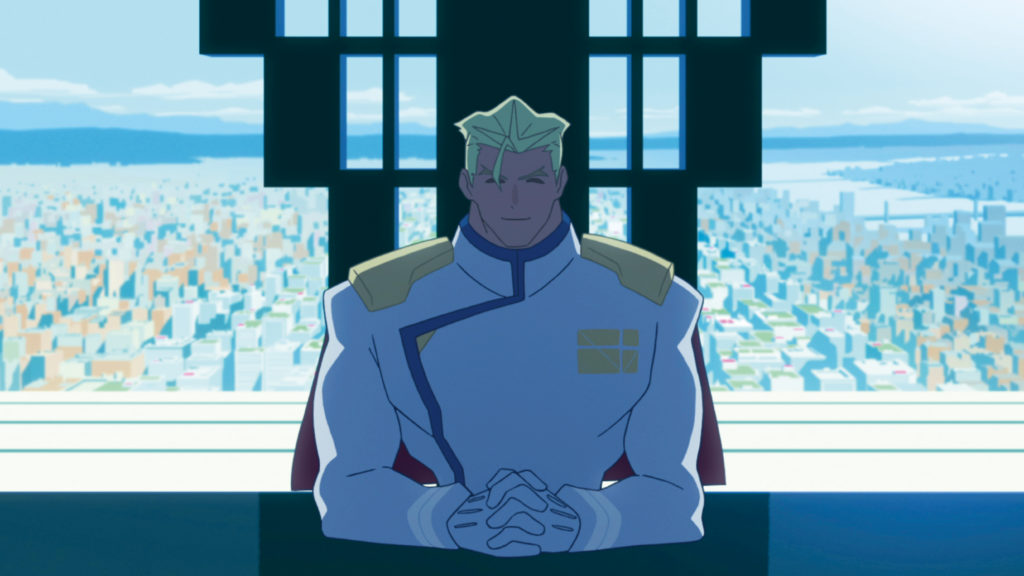 If anything, Promare’s greatest weakness is that there’s too much going on and not enough time to cover it all. The two-hour runtime feels like an unreasonable constraint for a story whose scope and scale is comparable to Gurren Lagann and Kill la Kill. Because the story has to barrel along from one set piece to the next, there’s not a lot of time to goof off. I found myself pining for the early monster-of-the-week episodes of Kill la Kill; give me a full episode with each Burning Rescue team member to really get to know them! 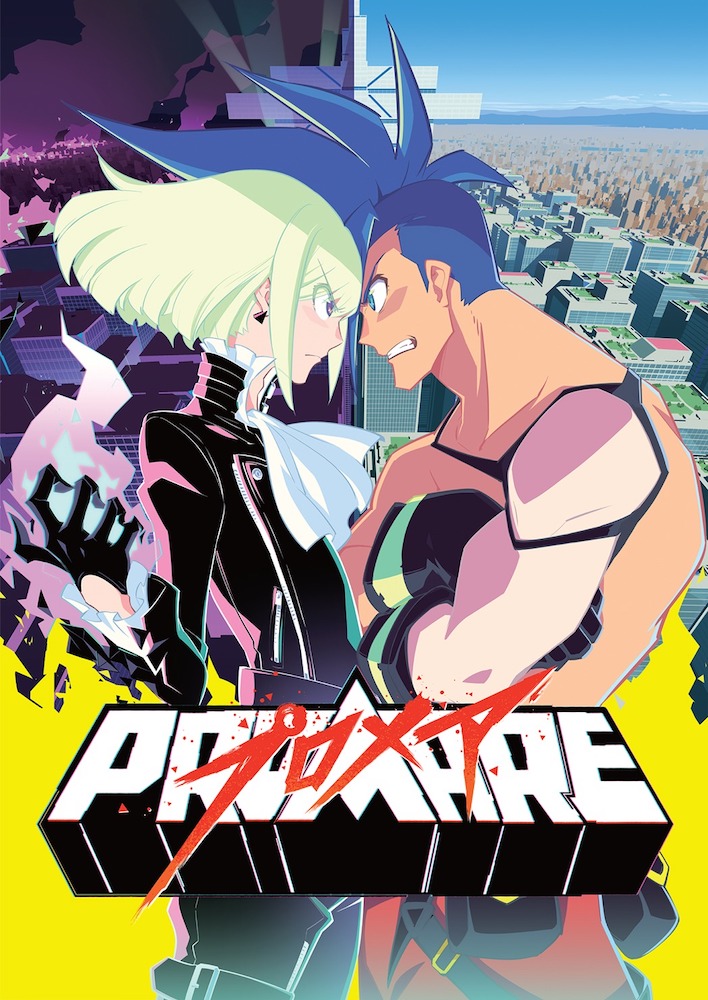 Further, a cast of male principals and a lack of time for side characters renders Promare without much of a female presence (though trust me, it’s got some very good boys). Burning Rescue’s transport airship pilot Aina has a strained relationship with her enigmatic scientist sister that plays nicely into the film’s finale, but in a movie so packed with bombastic action, it’s disappointing that there are zero female-led action scenes. Not just disappointing, but surprising as well, considering Imaishi’s last two outings — Space Patrol Luluco and Kill la Kill — feature tons of kick-ass heroines.

I’ve spent most of this review comparing Promare to the previous two TV series from its creators. The comparison is both inevitable and apt, since the movie is very obviously full of winks to those series for attentive fans. (Let’s just say drills may or may not make an appearance.) Unfortunately, Promare isn’t as much of a complete meal as something like Kill la Kill, which has more time to really establish itself. That said, being a feature film gives Promare one big advantage, and that’s the theatrical experience. Seeing the movie on the big screen, surrounded by a crowd of cheering anime fans, is the best way to experience it. Compressing the power creep of an Imaishi-Nakashima show into two hours transmutes an already intense experience into a dizzying collage of punching and yelling and more punching. At the Anime Expo 2019 screening I attended, the audience was so wound up that they went wild every time a title card appeared to introduce a character or mecha.

Promare heats up theaters in the US this week for a limited run and should absolutely be seen on the big screen. It’s one of the most fun action anime movies in a long time and represents an inflection point for both its studio and creator team. Trigger has proven capable of translating their success on TV into a feature film, Nakashima is leaning harder into political commentary than ever before, and the animation team has pulled off an ambitious digital animation experiment that is already influencing their future productions – notably Yoh Yoshinari and Nakashima’s upcoming BNA. Hiroyuki Imaishi said it best: being halfway is the worst, and thankfully Promare goes all the way. 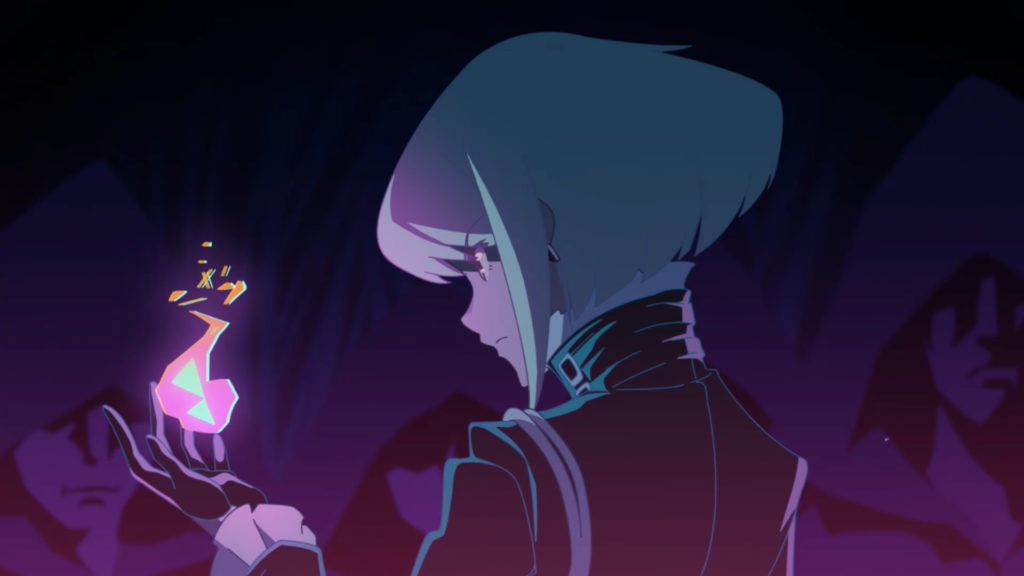 This review is based on an Anime Expo screening and a screener provided by GKIDS. Disclaimer: the author is friends with some of the staff who worked on Promare.