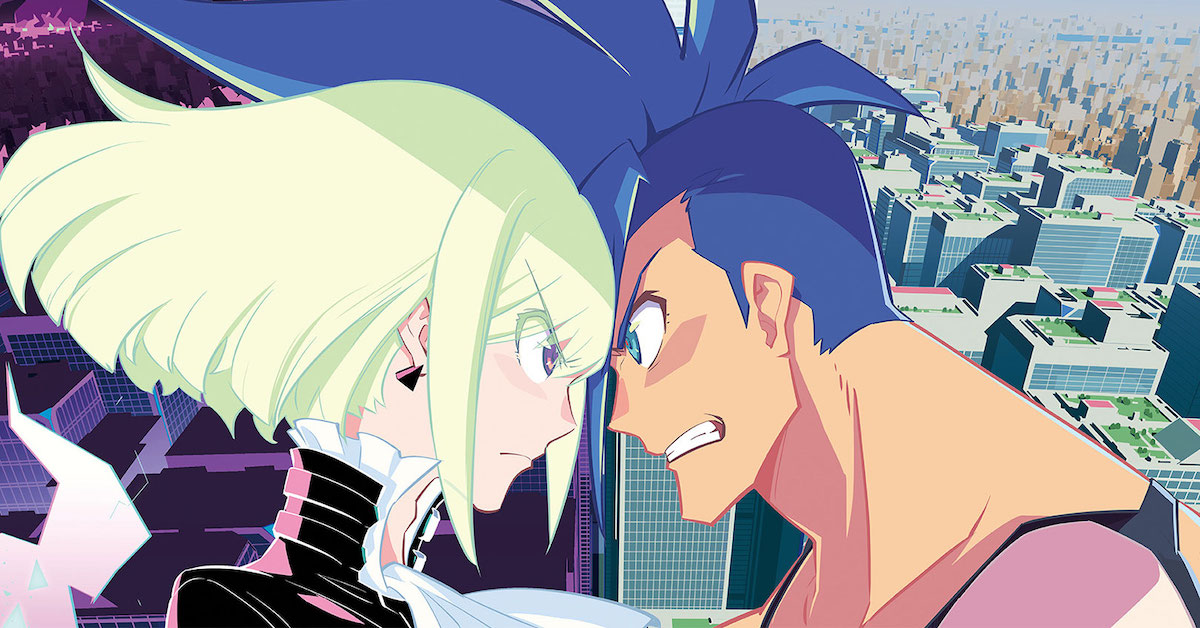 PROMARE, the first feature film from anime studio Trigger, has been, ahem, lighting up theaters in the US for about a month now with its high-octane firefighting action. In many ways the film is a culmination of years of work from its creators, combining their manic storytelling style with innovative new animation techniques and making use of virtually everybody who’s anybody at the studio. (If you haven’t seen it yet, you may want to check out our review of the movie!)

Whenever I’m at a convention with the staff from Trigger, I always make a point to sit down for an interview, and I had another opportunity this year at Otakon 2019. In attendance were the film’s character designer Shigeto Koyama (a freelance designer who you might know from Heroman, Inferno Cop, and the robots in Star Driver and Darling in the Franxx), producer Hiromi Wakabayashi (Kill la Kill, Panty & Stocking with Garterbelt), and the director himself, Hiroyuki Imaishi (Kill la Kill, Tengen Toppa Gurren Lagann, Panty & Stocking). The three are longtime friends and collaborators, and often refer to themselves collectively as “Geek Boat.”

Our interview covers the production of PROMARE, its connection with the wider “Trigger-Verse” that (extremely loosely) connects their works, and the creators’ thoughts on a movie that, like PROMARE, successfully marries 2-D and 3-D visual styles: Spider-Man: Into the Spider-Verse.

Thank you to Otakon guest and press staff, as well as interpreter Tatsuru Tatemoto, for the opportunity. Enjoy!

Going All Out on PROMARE

Ani-Gamers: Mr. Imaishi, you’ve had some prior experience with CG directing, but in PROMARE it feels like you really went wild with it. There’s a lot of dynamic camera work and choreography. What was the directing like for that? Did you do anything differently from usual?

Hiroyuki Imaishi: In the first half of the movie, I incorporated long shots of actions, like one minute or longer scenes, without a cut. Usually in animation, action scenes don't last that long, especially on television, because they get exhausting, but since we are incorporating CG and PROMARE is a theatrical release, I went all out with all these long action scenes.

Ani-Gamers: It actually kind of reminds me of Dead Leaves, in a good way. It’s so packed with action.

Imaishi: You’re quite keen with your observation...

Ani-Gamers: Another thing that's brilliant about PROMARE is the way it uses flat colors in both the 2-D and 3-D sections. It fixes the common problem in anime where the 2-D and 3-D stylization doesn’t match. How intentional was that?

Ani-Gamers: The 3-D animation is made primarily by Trigger’s sister studio Sanzigen, but there are a bunch of other studios that worked on it too, like Khara. How much did you micromanage the particulars of the 3-D and how much did you leave up to the other studios?

Imaishi: There are four portions in the movie: A, B, C, and D. The A part and D part are the portions with the most amount of action. So for A and D we asked Sanzigen to do most of the animation. For B and C we generally asked outside studios to help out with them.

However, there were a few scenes for B and C where Sanzigen already had previz [EDITOR’S NOTE: “previsualization,” a process of figuring out the staging of a scene with rough assets]. So for those scenes we just went with Sanzigen as well since [those scenes] were just a little bit more technical or more difficult to execute.

We have these two short prequel episodes to the film called “Lio-hen” and “Galo-hen.” For the Galo one, there is a hint that you might notice if you pay attention. There's an Easter egg in one of the monitors.

Ani-Gamers: In the Sanzigen scenes, did you provide a lot of corrections or did you rely on a unit director who handled most of the CG?

Imaishi: We did have a unit director for the 3-D parts, but we generally reviewed the scenes together. In terms of revisions, it really depended on who was doing the particular scene. Some animators were very experienced, very talented, and there's nothing that I could really say; it's an immediate “OK.” But there were some less-experienced animators, where we had to completely draw over what they turned in. It's a case by case thing, I can't really say for the entirety of the movie.

Ani-Gamers: Near the end of the movie there's a kiss scene, or as you like to say, a “rescue” scene. It's probably too much to ask for confirmation on whether—

Tatsuru Tatemoto: Are you asking if they're gay?

Hiromi Wakabayashi: Let’s say that you have a friend who’s unconscious and you had to give him CPR. Would that make you gay? Definitely wouldn’t in my book.

Ani-Gamers: Lucia, one of the members of Burning Rescue, looks a whole lot like one of the Trigger Girl mascots, Spring-chan. When are we going to see Lucia turn into Spring-chan?

Wakabayashi: You haven't had the opportunity to see this yet, but we have these two short prequel episodes to the film called “Lio-hen” and “Galo-hen.” For the Galo one, there is a hint that you might notice if you pay attention. There's an Easter egg in one of the monitors. So when it does get released, people who are fans of the Trigger-Verse should watch it frame by frame so you won't miss out on it.

Wakabayashi: No, that's just our take on IHOP. It's not that easy. I'm the one who put the Inferno Cop Easter egg in, but I have to admit it's pretty hard to find it while it's in motion.

Ani-Gamers: I'll consider it a challenge.

Koyama: Once you see it, it's pretty clear though.

Ani-Gamers: I know all three of you are big Marvel fans. Have you all seen Spider-Man: Into the Spider-Verse?

Ani-Gamers: It has a lot in common with PROMARE in terms of its combination of 2-D and 3-D. Has it inspired you at all in your own work?

Imaishi: Especially for people like myself who started as an animator and became a director, the ultimate goal is to achieve something where the actual film feels like the image boards. I'm pretty positive that the people who worked on Spider-Verse were trying to go for the same thing.

PROMARE was a little bit more of a niche film. We pretty much did what we wanted to do, whereas Spider-Man is more widely accepted.

And it isn’t just image boards. Even if it's adapting a manga or a visual novel, it’s very hard to maintain the vibe of the initial drawings. It's hard to replicate the same information that the still visual provides. At least for animation, that’s the image board, which is the original concept. For an adaptation it might be images from the manga or the comic or the visual novel. It’s hard to bring that into the film, and I feel that both us and the folks at Spider-Verse were trying to go for the same goal, to bring the same thing from the image board to the motion. 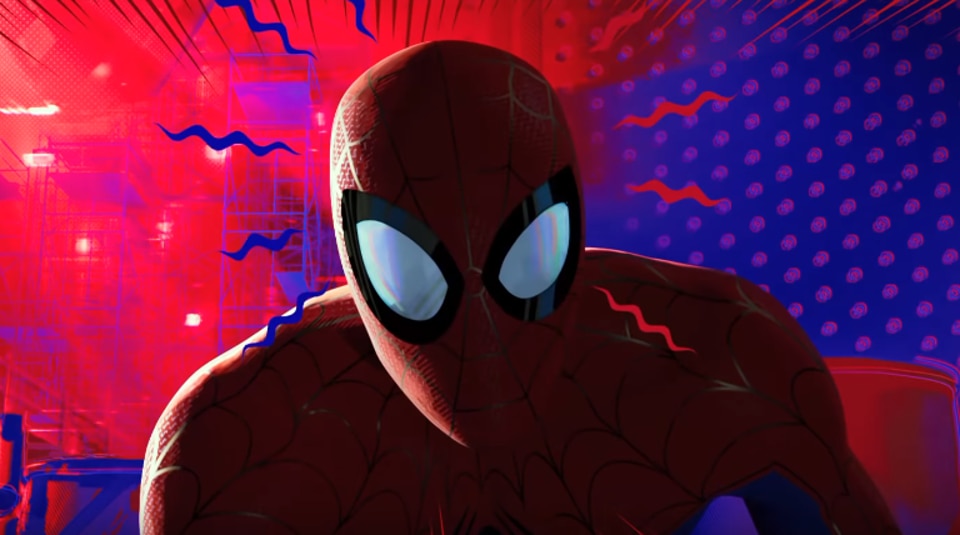 Ani-Gamers: Well I think you did it on PROMARE.

Koyama: I personally know the character designer for Spider-Verse, so I think I can relate very deeply with them. However, we had a lot less budget and staff on our film. Though I feel like we did quite well for what we were provided.

Wakabayashi: I think it’s safe to say that Spider-Verse is at the top of the entertainment department right now, and we’re going for the same composition: a straightforward story, but we really go all out on the visuals. And I think that kind of means that we’re quite ahead of the times in comparison to the other Japanese studios.

I do feel like Spider-Verse had a storytelling approach that was more accepted by general audiences, so I feel that they did a better job at reaching a larger audience … disregarding the IP part.

Ani-Gamers: It helps a lot to be Spider-Man!

Wakabayashi: Well yeah, right? I do feel like, again disregarding the IP, PROMARE was a little bit more of a niche film. We pretty much did what we wanted to do, whereas Spider-Man is more widely accepted. People can relate to Spider-Man’s story a little bit more than what PROMARE is about.

But still, we feel like PROMARE was our most widely accepted, easily accessible project, even more so than Gurren Lagann, at least among Imaishi’s works.