The final entry in our 2021 Staff Picks series ranks not kings, but anime — specifically those that aired in their entirety this year or ended in it. There was a lot to appreciate this year, and our staff enjoyed even similar titles in different ways and for different aspects. So sit back, read on, and see what you may have missed that you should go back and discover. Enjoy, and let us know your picks in the comments! 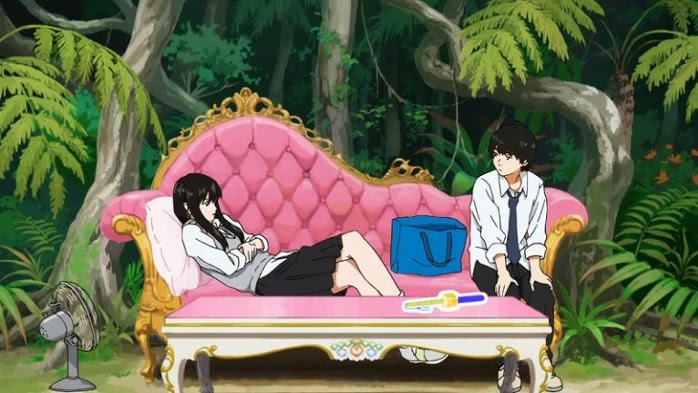 Anime is really, really good at making haunting, abstract visual-driven works, and Sonny Boy continues that fine tradition. At times, it’s a little too obvious and doesn’t trust its audience quite as much as I think it could get away with, but the overall effect is one of the quiet disaffection of teenagerhood into adulthood taken to bewildering extremes. The simple yet near-universal experience of a space you thought you understood well becoming unfamiliar and dangerous is amplified by the visual style, and even as an adult, having very little control on the direction of people around you can just crush you. And if that’s not enough to convince you, Sonny Boy also has character designs from Hishashi Eguch, best known for Stop!! Hibari-kun! 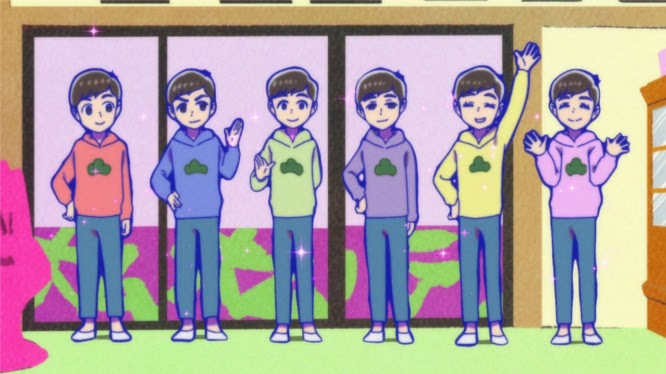 Half a decade and three series deep into its run, Osomatsu-san, the gag comedy about jerking off, has no right to be anywhere near as good as it is. Figuratively and literally in the shadow of the post-war era, Osomatsu-san seamlessly combines juvenile humor, existential angst, and the horror of having to be an adult in the 21st century into a cohesive whole so skilfully it is remarkable. The sheer hilarity of a single income household supporting a massive two-storey suburban house and six children in 2021 is funnier and more depressing with each passing year even as COVID horror began to creep in delicately around the edges. This third series covered topics as diverse as single parenthood and divorce law to the ethics of AI to ero VR, and all of it is done with a deep love of being a cartoon. The low-key ending isn’t at all what I expected from a show known for big gags and extended genre parodies, but this show, about what it means to stand in the flaming wreckage of the world the post-war generation created and try to laugh, hit me harder than anything else I watched this year. 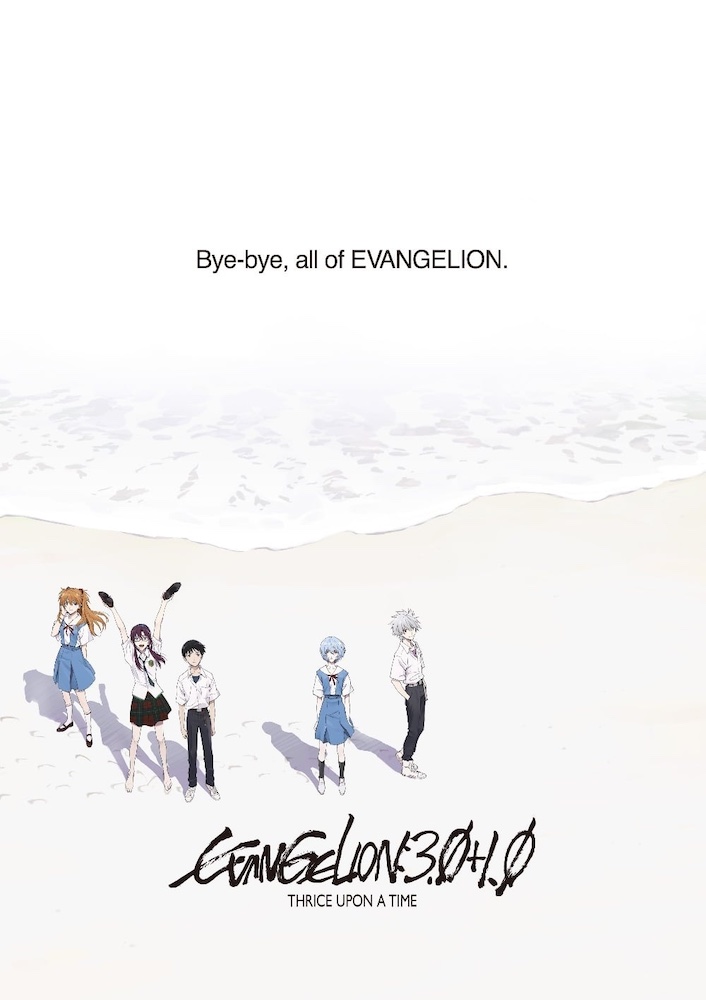 さらば、すべてのヱヴァンゲリヲン。In the midst of the real flesh world breaking irrevocably, at the end of a long journey for the creator and their audience, Evangelion remains a vital and deeply compelling work. I wrote extensively about Evangelion this year, and one of the things that continues to be inspiring about it is how age, family, and success haven’t dulled any of Anno’s artistic sensibilities or social commentary. Maybe that’s what benignly condescending to Hayao Miyazaki’s relentless bullshit does to you over the course of a lifetime, fills you with the desire to be better than the people who came before, less complacent, angrier, more capable of affecting change and determined to be a positive influence. And so the final Evangelion Rebuild film is a long, extraordinary, entirely unexpected healing work meditating on the long history that brought Anno and all of us to this point as well as a complete rebuttal to the talking point that Anno hates his fans and his most famous creation. Nobody who hates their fans and legacy would be capable of making a film like Evangelion: 3.0+1.01 Thrice Upon a Time. I just wish I could have seen it in the cinema. 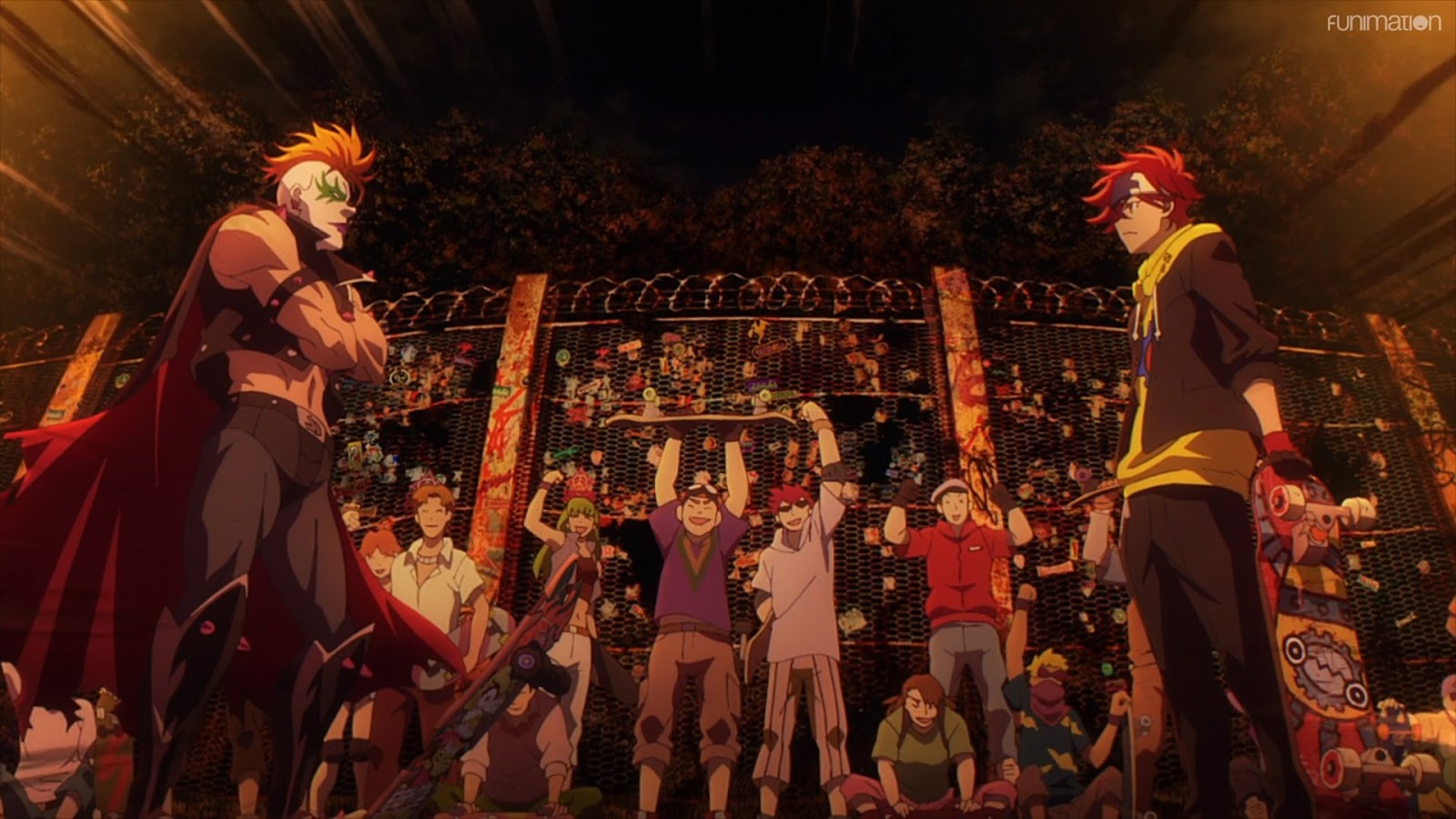 What may have been the most popular sports anime since Yuri!!! on Ice turned out to be one of the most unexpected and runaway hits of the year. It seemed like fans across the anime spectrum were pulled in by the sheer weirdness and vibrancy that make anime (in general) a feast for the eyes and soul. Focused on an “underground” skateboarding race hosted by the matador of love, Sk8 the Infinity was everything I needed at the time and cannot live without since: a ridiculous premise that plays it straight to the point of self-deprecation, outlandish characters with laughable gimmicks, unnecessarily complicated back stories, and gorgeous animation. Yes, aside from the latter, Sk8 is the Keijo!!!!!!!! of 2021.

But behind the absurdity of it all, and something I still hold dear regarding the series, is the fact that the friendship between the two main characters isn’t so shallow as sk8ing ability. Instead, the conflict between board builder Reki and snowboarder turned sk8er savant Langa evolves slowly and organically from simple jealousy via a very real mix of emotions connected to others’ perceptions of athletic ability to coming to terms with why, how, and to what ends one engages in what they love. The rest is icing on the cake, and there’s a lot of icing. 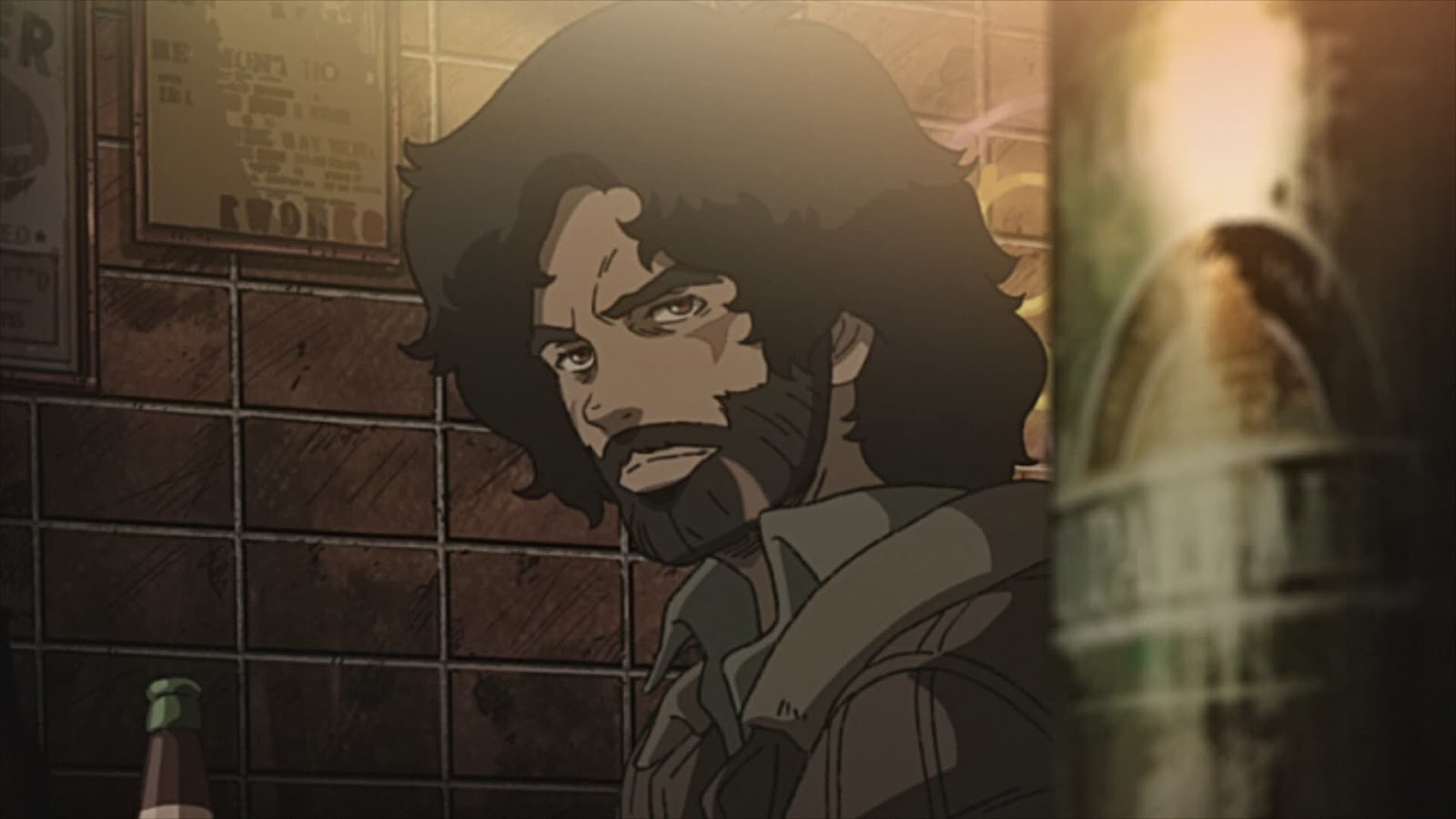 I wouldn’t normally recommend a sequel as an AOTY contender, especially when the original was so complete that any supplemental material might at best add the caveat, “But don’t watch Season 2,” and at worst bring up a foul taste in the mouth when mentioning the IP. Thankfully, this redemption story stands firm to tell its own tale and can be appreciated all the more when taking the whole history into account.

On its own, this post-climax story depicts a boxer who fought his way to the top of the world and kept fighting until there was no-one left by his side. He has to heal before he can resolve, and there’s a long stretch of daunting road before any kind of rest stop. While Megalobox: Nomad competently engages with themes of addiction, moral compromise, abandonment, immigration, corporate greed, and toxic masculinity, the twists on most of the same in relation to Season 1 are cleverly implemented and prove a punch to the empathetic gut.

In the end, the best thing about Megalobox: Nomad is that it makes a backdrop out of its defining element (mechanized boxing) to truly focus on the drama outside the ring. And thank you, Mabanua, for the slappin’ song behind the OP! 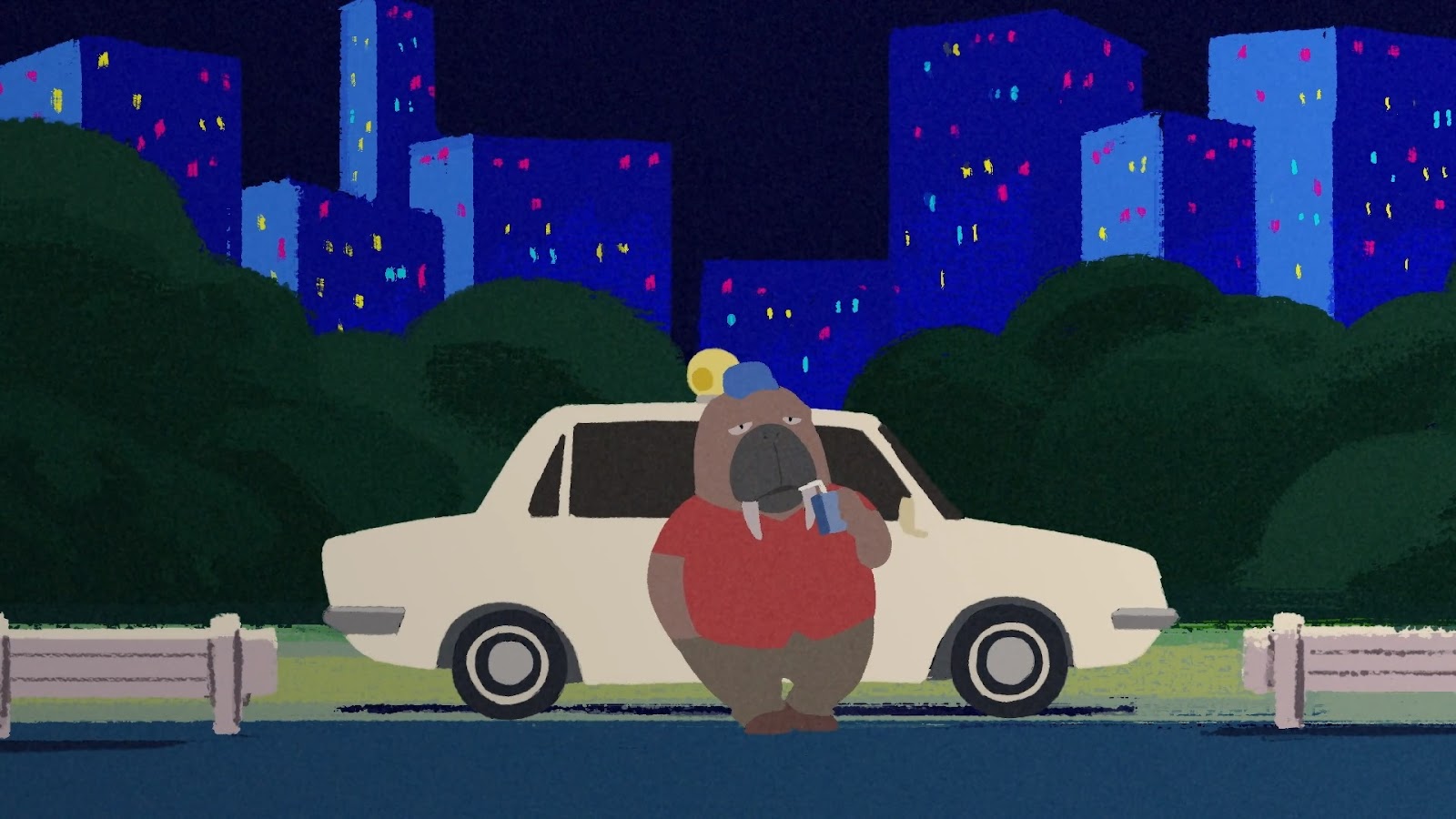 To be completely honest about how much I wanted to like this show, it’s totally fair to say ODDTAXI had its hooks in me from the second its PV, featuring an anthropomorphized, 41-year old walrus who drives a taxi, was released. My love and commitment, thankfully, turned out to be totally justified by every second of this show. The noir elements (lighting, framing, story); the nigh-deadpan vocal stylings from the stoic MC Odokawa; the arid desert humor; the repartee between all characters except the manzai team; the solid use of uncomfortable silences, and, yes, the alpaca who practices capoeira made every episode a must-see appointment on simulcast day. And like most AOTY, the show only gets better when you watch a second time around.

A laudable and daring perspective shift towards the middle of the last episode (and the ten minutes that follow) beg people to re-watch from square one to see how well the twist is woven throughout. Spoiler: its weaving is Arachne class. Not since Samurai Flamenco’s infamous Episode 7 do I remember Ani-Twitter blowing up in a collective gasp. But that isn’t the all of ODDTAXI’s worth; it’s a show with a ton of great characters, unique atmosphere and styling, and a ton of thought behind its presentation. 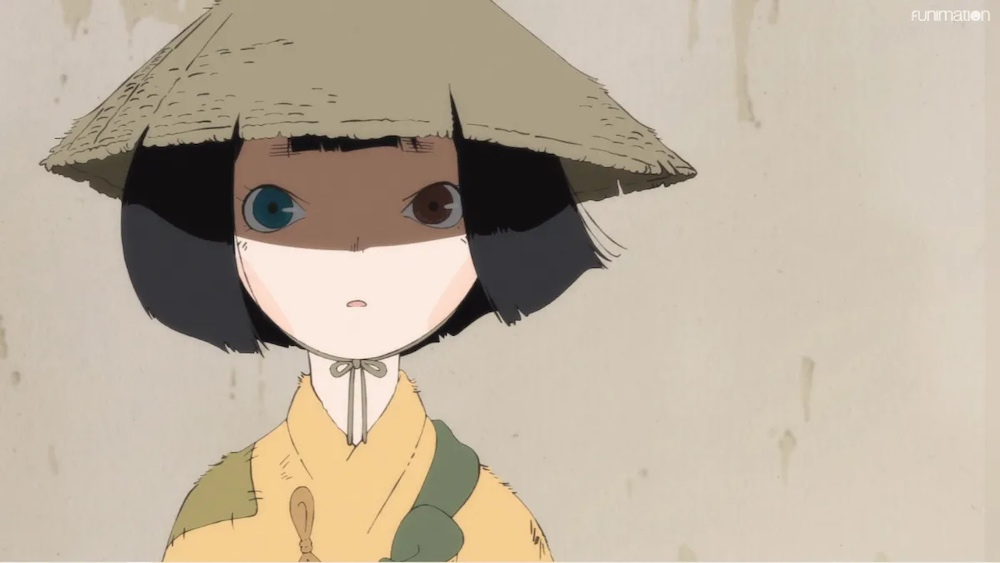 I’ve never totally clicked with director Naoko Yamada (A Silent Voice, Liz and the Blue Bird). The Heike Story changed that. An animated adaptation of a novelization of the medieval epic of the same name (phew), the series is about as different as you could get from the high school stories that made Yamada a star. The Heike Story is a complex tale full of court intrigue, military strategy, and characters with similar names and haircuts (I kept Wikipedia open while watching), but only rarely does it offer sweeping shots of massed armies and rousing speeches. In her characteristic style, Yamada instead turns her camera to intimate moments of uncertainty and vulnerability, revealing that for all the distortions of history, the characters of the Heike Monogatari were real people who lived, loved, and died. The addition of the fictional character of Biwa is a stroke of genius as well. She serves as a stand-in both for the musicians who retold the original tale and (most effectively) the audience who can only watch in horror as the famous tragedy unfolds. This is a remarkable series that every critic will recommend but no one will watch. Please prove me wrong. 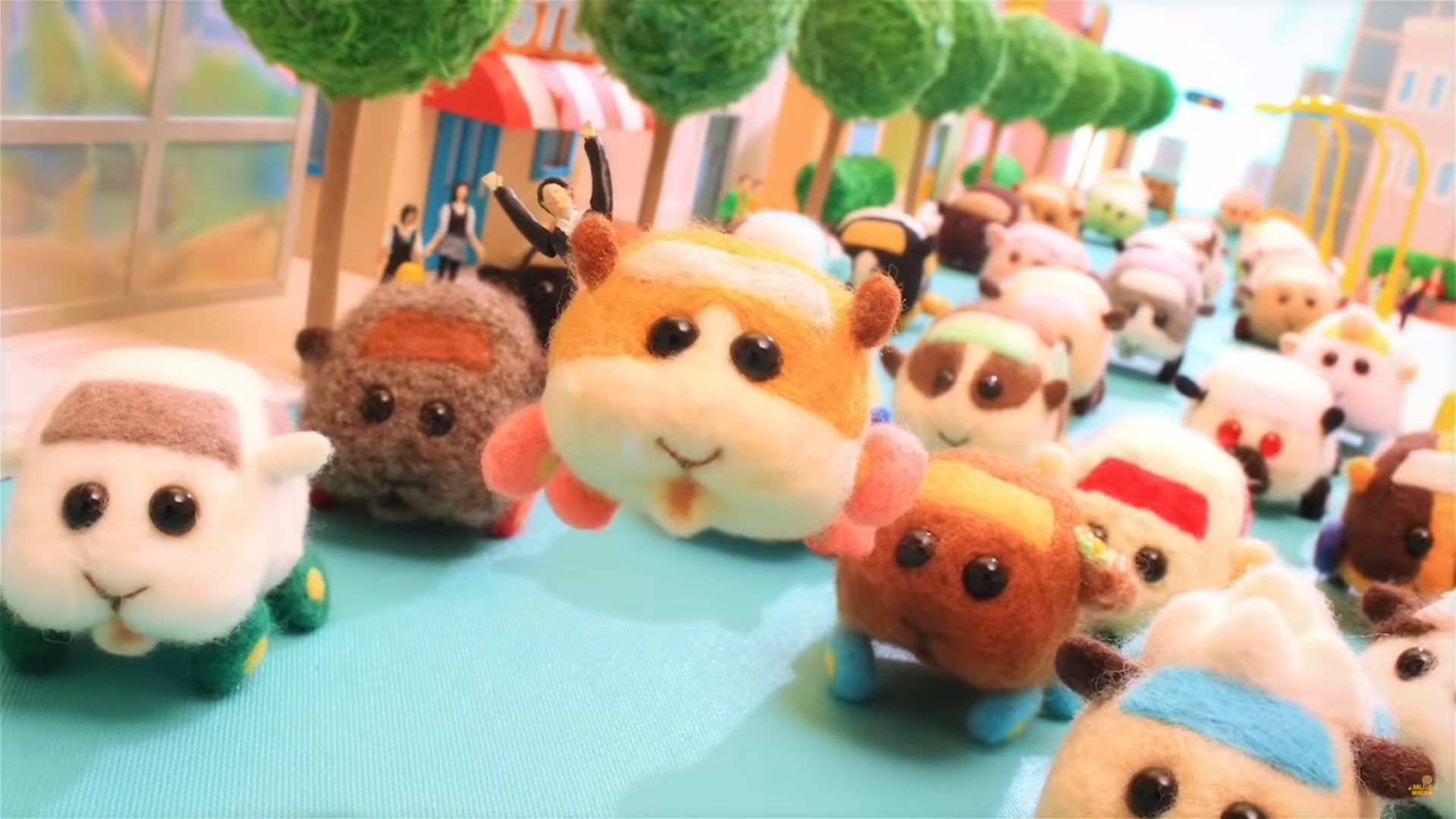 The series that stole the Internet’s collective heart in 2021, Pui Pui Molcar is so much more than a cuddly character design. This collection of wordless stop-motion shorts about guinea pig cars showcases a creative team at the top of their game and working in a style that rarely breaks into the mainstream of Japanese animation. It’s also completely hilarious. From simple comedy sketches to full-blown parodies of The Fast and the Furious and Back to the Future, Pui Pui Molcar is ambitious and surprising in ways that defy our expectations for short-form, kid-friendly YouTube content. Considering its popularity in Japan, I fully expect more Molcar in 2022. I can’t wait. 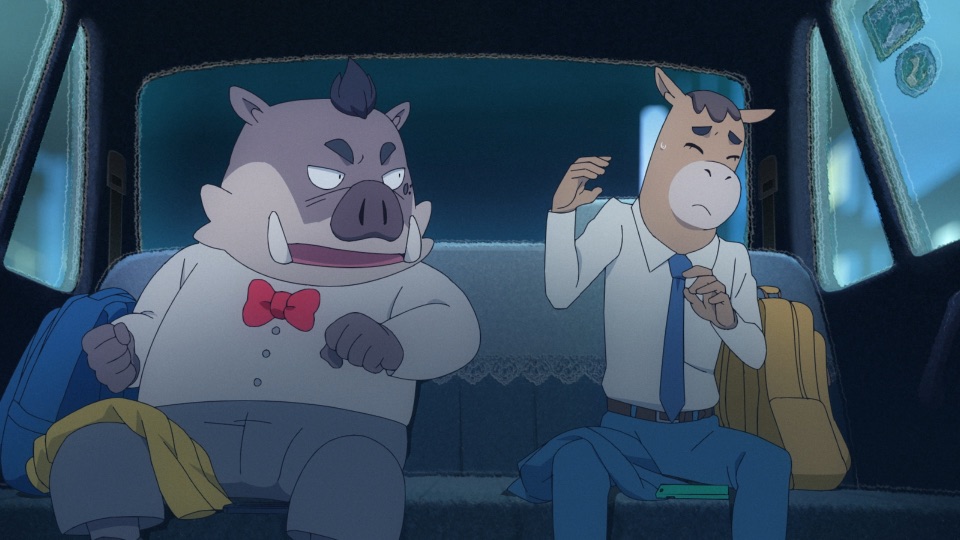 Don’t let the talking animals turn you off; ODDTAXI isn’t so much a furry anime as a whip-smart urban drama that happens to have animal characters. This story of a grouchy walrus taxi driver begins as a slow burn. It takes its time to introduce an extensive cast of interconnected characters — a comedy duo, a clout-chasing college student, a crooked cop, a pop idol group, a gangster — and then uses the framing device of the taxi to weave them into a twisty crime drama. What holds it all together is a slow and steady sense of pacing and a level of respect for the characters and their journeys that’s all too rare in TV anime screenwriting. There are no easy archetypes here. Even characters who appear as such, like the aforementioned pop idols or the shut-in obsessed with mobile games, end up heading in totally unexpected directions. And while it‘s not doing anything flashy animation-wise, the series has some of the most unique and memorable character designs in years, rendered in a slick, textured art style. ODDTAXI doesn’t check almost any of the boxes for marketable modern anime, but maybe that’s precisely why director Baku Kinoshita was able to get across his unique vision so perfectly. A true original like this only comes along once every few years. Don’t miss it.

EDITOR’S NOTE: Due to a little technical hiccup (his laptop died!) Patrick wasn’t able to write up his picks, but we’ve included them here in list form. And what a year it was for our resident superfan of Baki, Gridman, and Gundam!

Looking for more 2021 recommendations? Check out our Staff Picks for manga and video games.