Welcome to the third post of our annual “Staff Picks,” in which the Ani-Gamers team selects some of our favorite anime, manga, and video games of the past year. This time we’re covering anime!

If you’re strictly looking at the anime output of 2019, it was yet another great year. An ambitious second season of Mob Psycho 100, highly anticipated CG productions like Promare and Beastars (still not available on Netflix!), a new music-focused series from Shinichiro Watanabe (Cowboy Bebop), and Netflix’s big US-Japan co-production of Cannon Busters, among many others. On top of that, Evangelion made its triumphant return to North America thanks to Netflix, stirring up some new controversy along the way.

Unfortunately, all that good stuff was clouded by the worst anime news in decades: a brutal arson attack at Kyoto Animation that left 36 people dead, 33 more injured, and many of the studio’s production materials and digital backups destroyed. The attack represented not only a major tragedy for the anime industry, but the worst mass murder in post-war Japanese history. The victims included acclaimed veterans like Yoshiji Kigami and countless young artists, many of them just out of college and eager to begin work at their dream job. KyoAni was one of the few studios with a reputation for treating their workers with the dignity that they deserve, making the loss of their talented, passionate staff all the more painful. Thankfully, KyoAni has managed to gather a huge number of donations from fans to support the victims’ families and the studio has resumed production, with the new Violet Evergarden movie scheduled for April 2020.

Below, Ink and Evan have listed some of their favorite anime titles of 2019, covering TV series and movies, action series and comedies. Enjoy, and feel free to chime in with your own 2019 picks in the comments. 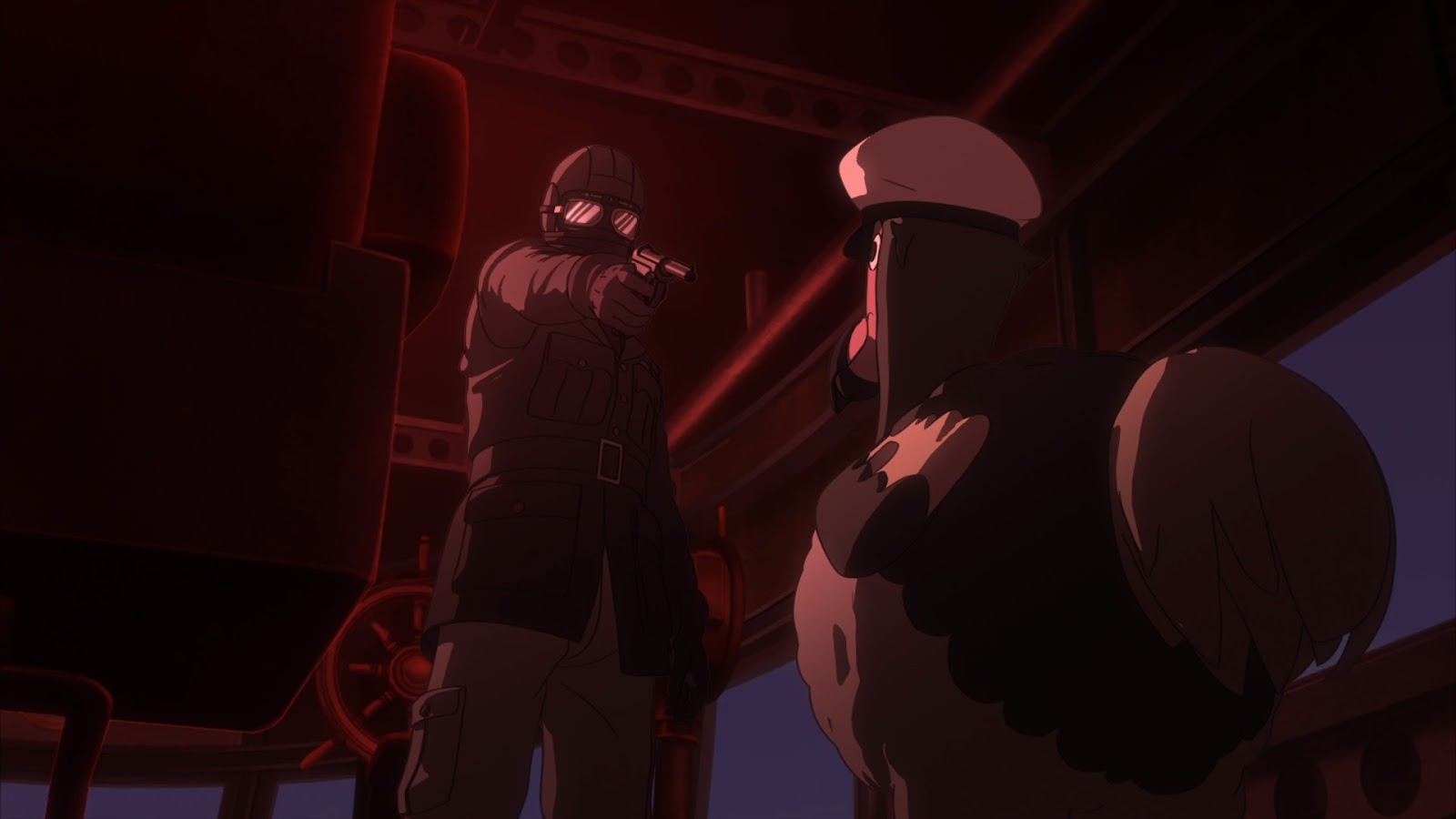 It’s not that I see this title qualifying as one of the best anime of the year, it’s just that, as a WWII plane otaku and airshow enthusiast, The Magnificent Kotobuki (TMK) is one of my personal favorite anime from this past year. Watching TMK is like watching someone play Crimson Skies: High Road to Revenge but with much more attention paid to the planes’ mechanical details and exterior wear as well as some very convincing weight dynamics applied to the dogfights. (The dogfights, by the way, range from intimate 1-on-1’s to squad based to air force against air force (and everything in-between) – all presented in loving detail with so many different angles and approaches that they are definitely the stars of the show.) The characters, save Captain Dodo (the stone-faced badass pictured above), are superfluous, but there’s a fair amount of comedy (mostly stock but some original gags) that works well because of the characters and how they’re used that keeps the show entertaining even when not in the air. The only downside, and it isn’t much of one, is the 3DCG animation used most noticeably for the characters; it stands out like a sore thumb against more organic backgrounds, but not so much as to make the show unwatchable. I looked forward to each episode release every single week.

I stand by my original description of Wasteful Days of High School Girls (WDoHSG) as Teekyu x Azumanga Daioh with a load of wit via well-placed running gags and impeccably timed, snarky one-liners. It’s cast is a large ensemble, and the show does well via piecemeal introductions that eventually allow the characters’ traits and tendencies to be expressed and received differently depending on which characters are present – the depiction thereof, as someone prone to excessive compartmentalization, I appreciate quite a bit. Watching people bounce off of other people to varying degrees is great, and the aforementioned timing, crucial to any comedy, is spot-on, but WDoHSG also leverages repetition of animation and situational cuts to great effect. I’d be failing the show completely if I did not mention its AOPOTY (Anime OP of the Year), which consists of an all-female (VA-sung), almost nonsensical, gag-filled rap/pop track ("Wa! Moon! dass! cry!") that initially backs the narrative of a photo-bombing Tanaka as she takes candids of her friends (the cast) and later delves into visual gags and welcome randomness that gets more fun as you get to know the characters. WDoHSG is nothing deep, but it’s a show that consistently makes me belly laugh, and that’s exactly what I needed this year. 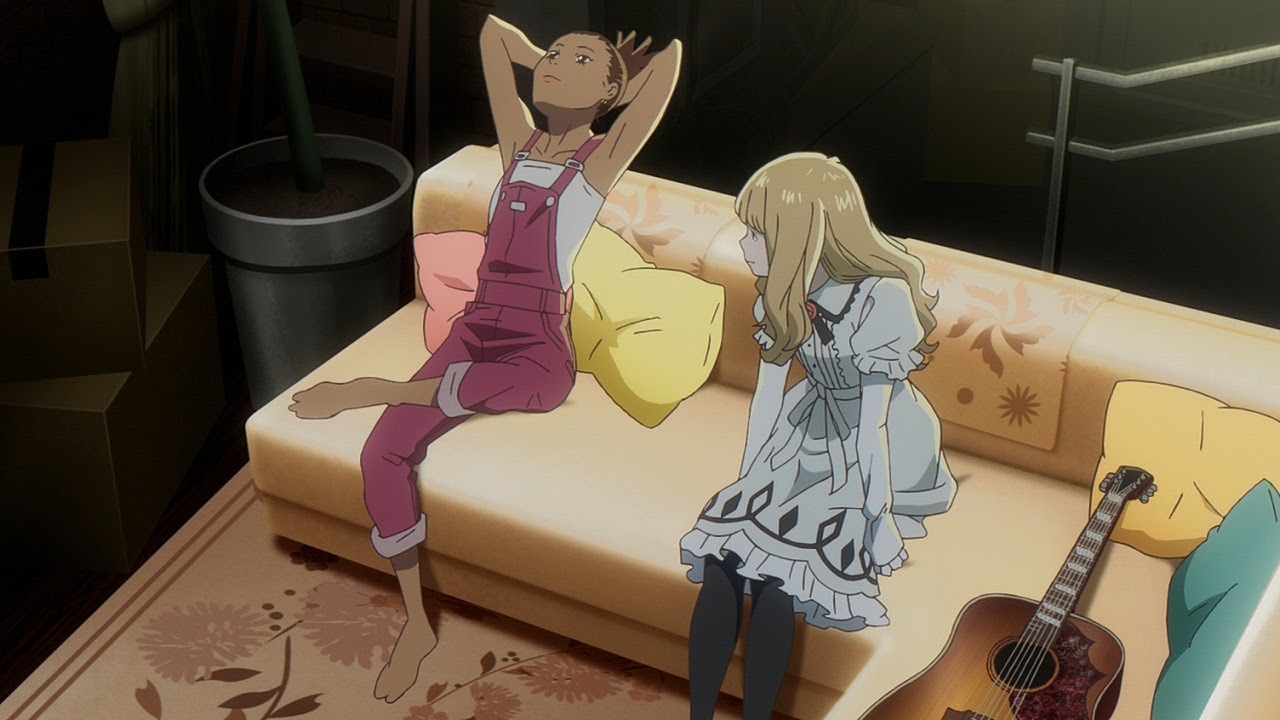 After watching the initial trailer for Shinichiro Watanabe’s new music-focused joint, I was skeptical; the guitar playing animation seemed loose, how much could you do with a keyboard, and something just felt off in general. (Watanabe has said he doesn’t like loose depictions of music being played — one of the reasons Kids on the Slope was so intricately animated.) I was very happy to put my initial impressions behind me, however, very soon after I started watching the series proper. It’s a title with a ton of heart that wants to resolve issues stemming from socio-economic disparity through the creation of art. The topic of privileged creator vs. struggling artist is addressed too lightly and almost dismissed via casual acceptance in the first season; resolutions come a little too easily, and arguments that should be had are, for the most part, laughed off in the face of loneliness/desperation. That, however, feeds into the show’s main focus which is healing and growth through friendship and creation/expression — coming together to be something more than yourself by being a part of something greater to which you personally contribute. And that really sets up the second cour. The pacing is rushed but no unacceptable, and the characters are as charming as they are amusing (and vice-versa), but the main reason why this is my favorite of the year is simply that it got me to watch an in-series version of a reality TV show that was, itself, fun, funny, and increasingly tense. 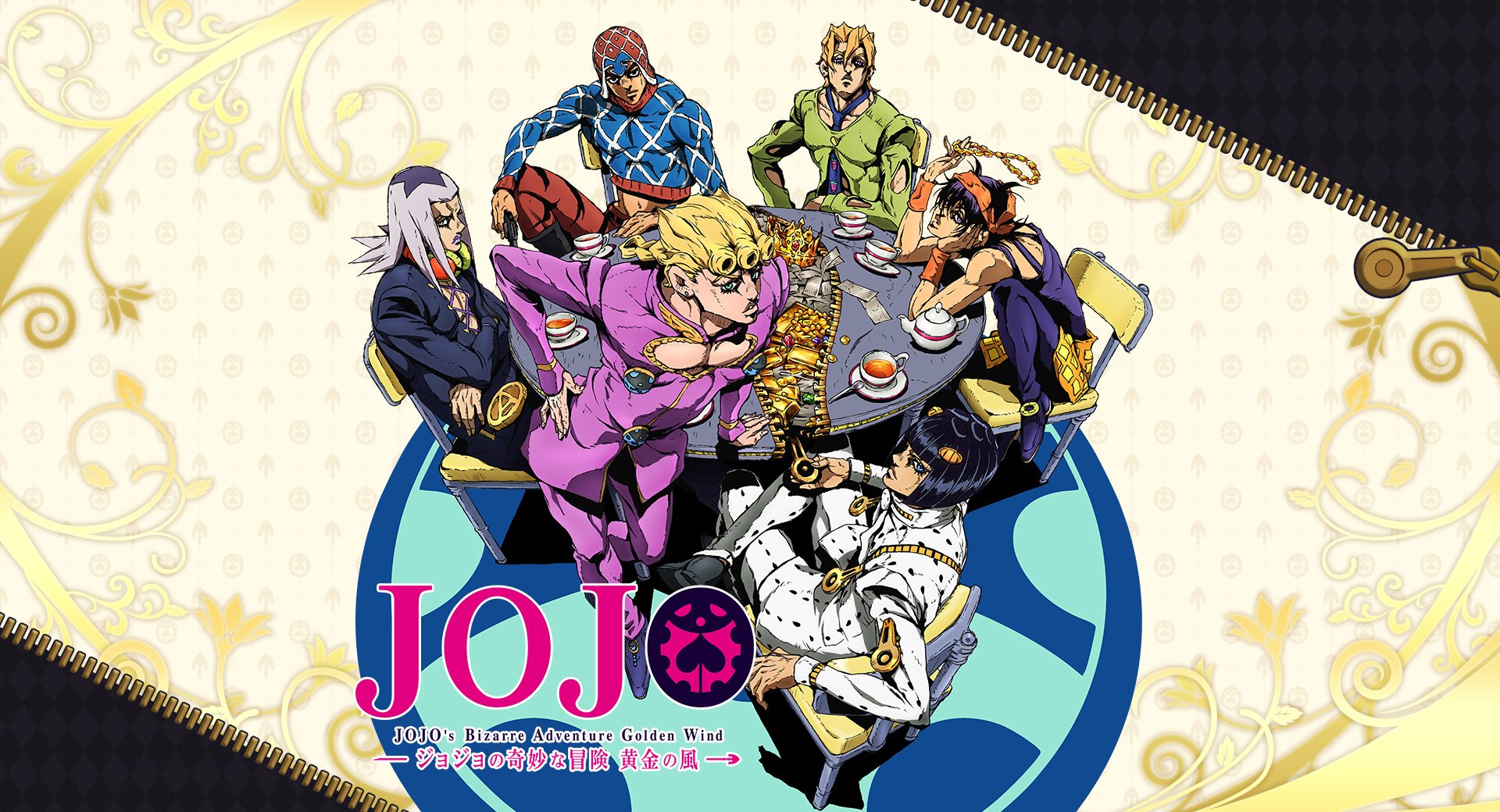 The hits keep on coming for JoJo’s Bizarre Adventure. Following up on last year’s excellent Diamond is Unbreakable, Golden Wind takes us to Italy to check in on Giorno Giovanna, the son of infamous vampire Dio. Golden Wind’s cast lacks the easy charm of Josuke, Okuyasu, Koichi, and Rohan, and it’s hard to hold a candle to Yoshikage Kira in the villain department, but at least for me the leads aren’t the real stars of this show. In Golden Wind, Araki’s overactive imagination seems to get a bit of a power-up, as everything from the costumes to the Stand powers becomes even less plausible (and thus, better). Characters walk around wearing entire outfits riddled with holes for fashion reasons. Enemy stands can do things like accelerate the aging of everyone in a train or — get this — spawn a baby assassin out of a briefcase. David Production, too, are at the top of their game on this latest adaptation, continuing their strong command of Araki’s unique character design style while bringing in new animators to craft dazzling action and effects sequences. Stone Ocean is on the horizon and I couldn’t be more excited. 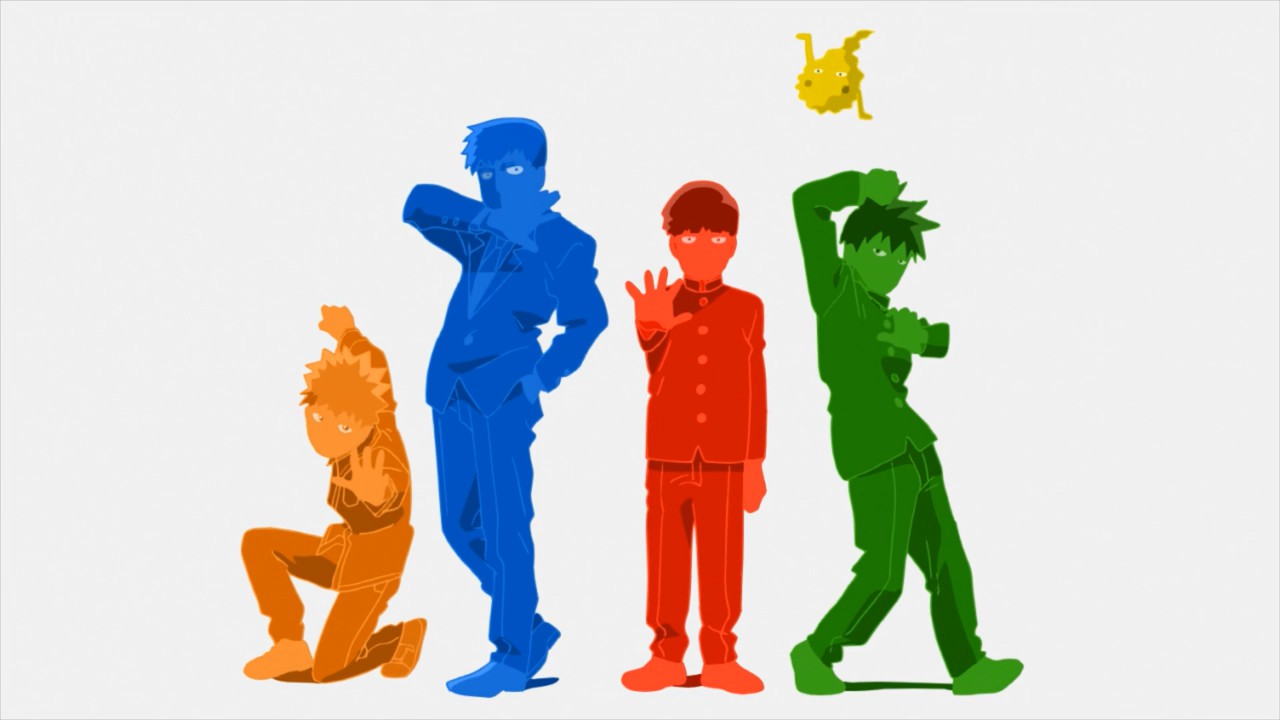 When it comes to anime adaptations of ONE manga series, I was always a One-Punch Man guy — there’s nothing quite like watching the coolest action concepts crumble into dust under the scrutiny of ONE’s sardonic, anticlimactic sense of humor. But 2019 brought us second seasons for both of his big series, and let’s put it this way: I didn’t even bother with the second season of One-Punch. Mob Psycho 100 Season 2 is a stellar follow-up to what was already an excellent first season (it was one of my Staff Picks back in 2016). The season picks up thematically where the previous one left off, as psychic middle-schooler Mob seeks self-improvement and greater self-confidence. Sometimes the show’s character arcs feel like retreads (the faux-psychic con man Reigen is as devious and manipulative as ever), but then it unexpectedly dives down dramatic avenues that push the characters to their breaking points. More than anything else, however, Mob Psycho is worth watching for the dazzling artistry on display in nearly every frame of every sequence. Action scenes crackle with energy, and the animators spare no expense detailing the supersonic whiplash and earth-rending force of the series’ many psychic battles. What has always set Mob Psycho above the rest, though, is the fact that even the scenes of daily life are beautifully animated, full of loose, expressive, and frequently laugh-out-loud funny character acting. This is one of the best-looking shows in years, and highly recommended for any fans of great animation. 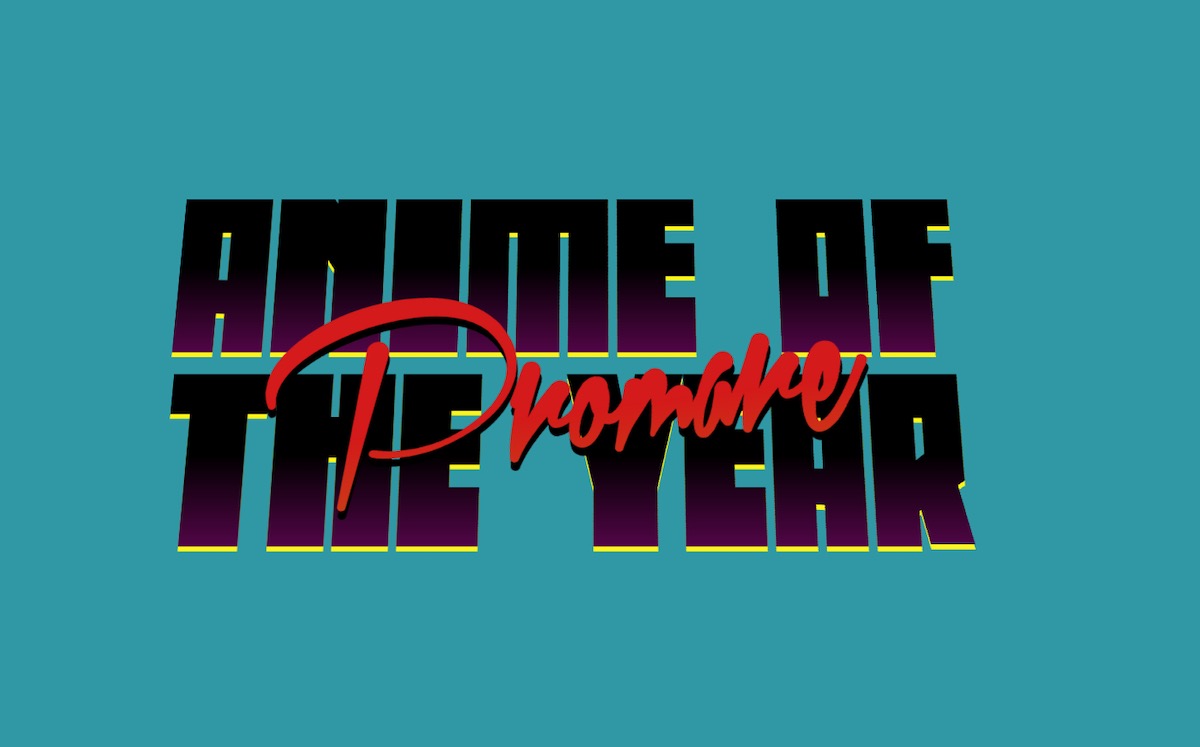 No anime experience of 2019 can compare to sitting in the largest ballroom at Anime Expo in Los Angeles, cheering and hooting along with the crowd as I watched Promare for the first time. Studio Trigger’s first feature film plays out like a compressed version of Kill la Kill and Tengen Toppa Gurren Lagann; it’s one magnificent set piece after another, strung together by a series of unlikely twists and betrayals. The gags are fast and exceedingly dumb, the characters are larger than life, and oh yeah, it’s about gay firefighters duking it out with eco-fascists. On top of that, the film’s eye-popping, candy-colored world is powered by a groundbreaking 2-D/3-D hybrid production, utilizing the best talent at both Trigger and their sister studio Sanzigen and merging their two styles into a unified whole. Promare may not be my favorite from its creative team (Kill la Kill and Gurren Lagann are tough acts to follow), but it provided me with more pure, unpretentious fun than anything else this year. I liked it so much I made a whole damn website to celebrate it!