Welcome to the second part of our annual “Staff Picks,” in which the Ani-Gamers team selects some of our favorite anime, manga, and video games of the past year. This time we’re talking video games!

As usual there are a lot of games to cover, and between our two contributors we weren’t able to play nearly as many of them as we’d like. This year saw two standout first-party Nintendo RPGs, including the first-ever original core-series Pokémon games on a home console, the long-awaited release of Hideo Kojima’s inscrutable Death Stranding, a new AAA Star Wars action game (Jedi: Fallen Order), and both Outer Worlds and Outer Wilds. Meanwhile, last year’s big story of game industry unionization has continued to make headlines, notably at the Game Developer’s Conference in the spring, where major industry figures publically expressed their support for unionization. And that’s not the only area where politics had a big impact on gaming in 2019 — Blizzard’s suspension of Blitzchung over his support for the Hong Kong protests highlighted the contradiction between the values held by game industry workers (including pro players) and their bosses. As uncomfortable as these conversations are, they’re vital for building a more ethical industry.

In terms of the games themselves, many of them didn’t make it out of our piles of shame in time for the Staff Picks, but the ones that made the cut cover a wide range of genres, including complex action games, extremely anime JRPGs, and obtuse puzzlers. Enjoy, and feel free to chime in with your own 2019 picks in the comments. 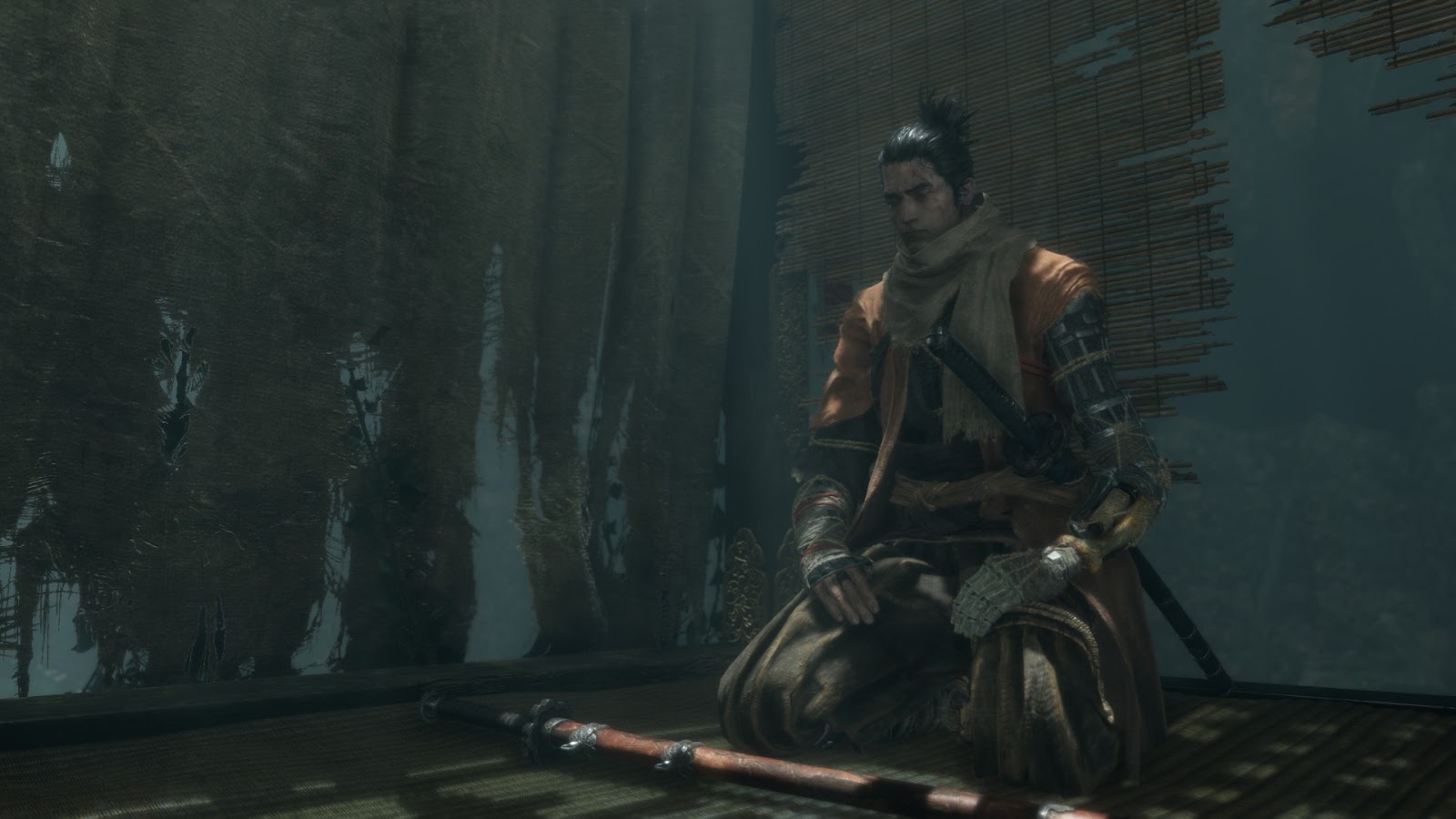 The hardest part about Sekiro was mending my relationship with my podcast co-host after debating the ethical conundrum of difficult video games and being made to look like a prick on tape. I’m completely making up what happened so don’t ban me from the site, Evan. Levity aside, the irony is that I never actually finished Sekiro and gave up at an endgame optional boss. A far departure from both Dark Souls and Bloodborne, From Software’s katana-focused revenge story did a Shinobi Execution to my hundreds of hours of experience and I was forced to learn everything over again. Some people really got on board with the action-focused gameplay whereas I flunked out of samurai school, so Sekiro is only the third-best pick from me on my list. If there had been more lore to pick up off the ground, I probably would have finished it, but I think everyone’s favorite fantasy author, George R.R. Martin, has me covered with Elden Ring, which will definitely be closer to what I expect from Hidetaka Miyazaki than what I got from Sekiro. 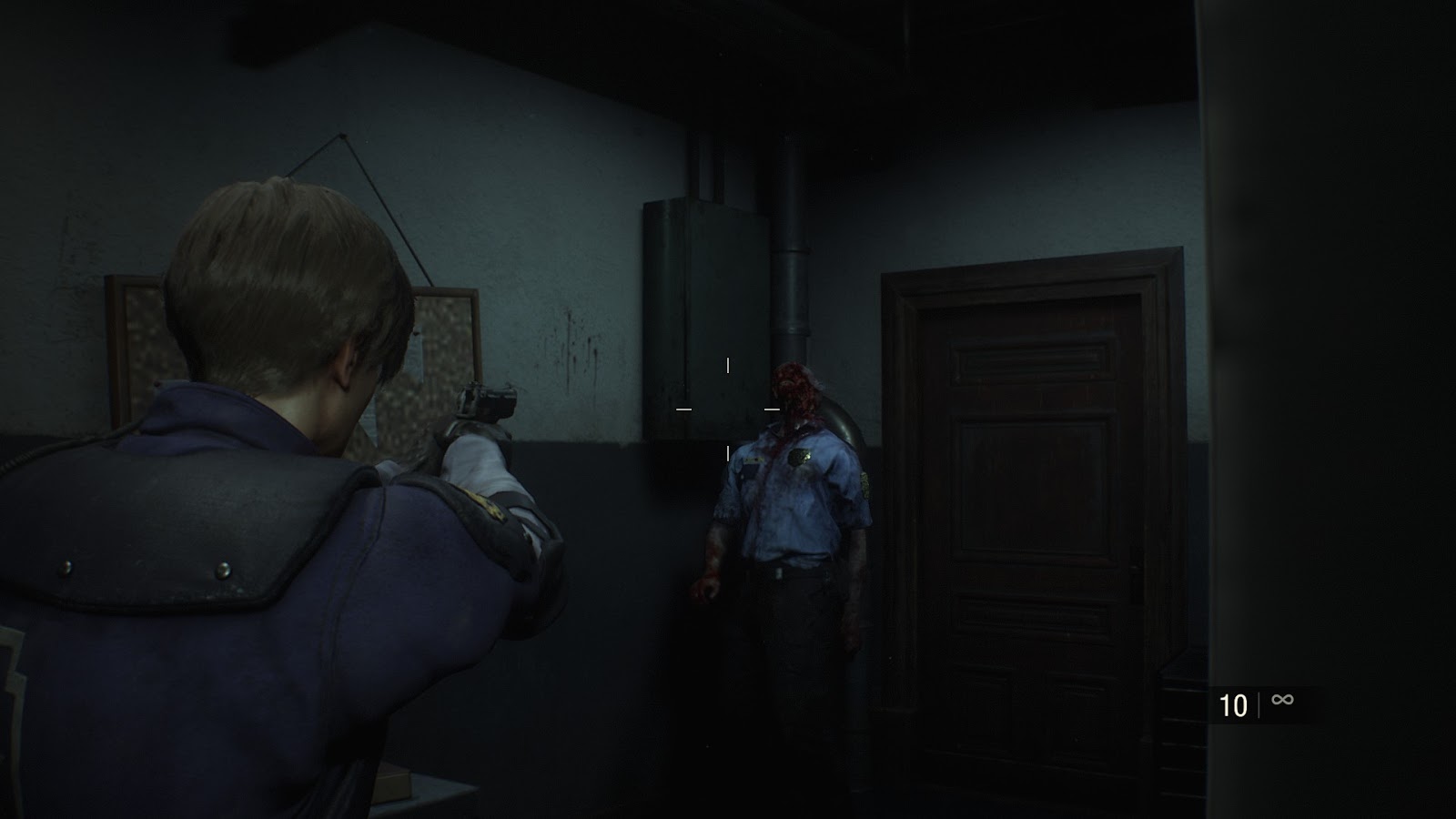 I originally wrote in Fire Emblem: Three Houses in here but I never finished that game in 2019. Resident Evil 2 (2019) on the other hand is a game I beat again and again throughout the year when I should have been focusing on other games (like Fire Emblem). First released on PlayStation over 20 years ago, the RE2 remake takes every great bit from that classic and reimagines it in the new engine used for Resident Evil 7. Fighting to survive Raccoon City’s zombie apocalypse again with Leon S. Kennedy and Claire Redfield in a game rebuilt for modern standards is not something I expected to see, but I suppose Capcom didn’t want to be shown up by Square Enix reviving the 32-bit era with the upcoming episodic Final Fantasy VII remakes. Conveniently enough, now that I’ve played RE2 inside out, we’re already getting the Resident Evil 3 remake in April, so now I’ve got one more good reason to put off finishing a single run of Fire Emblem in my lifetime. 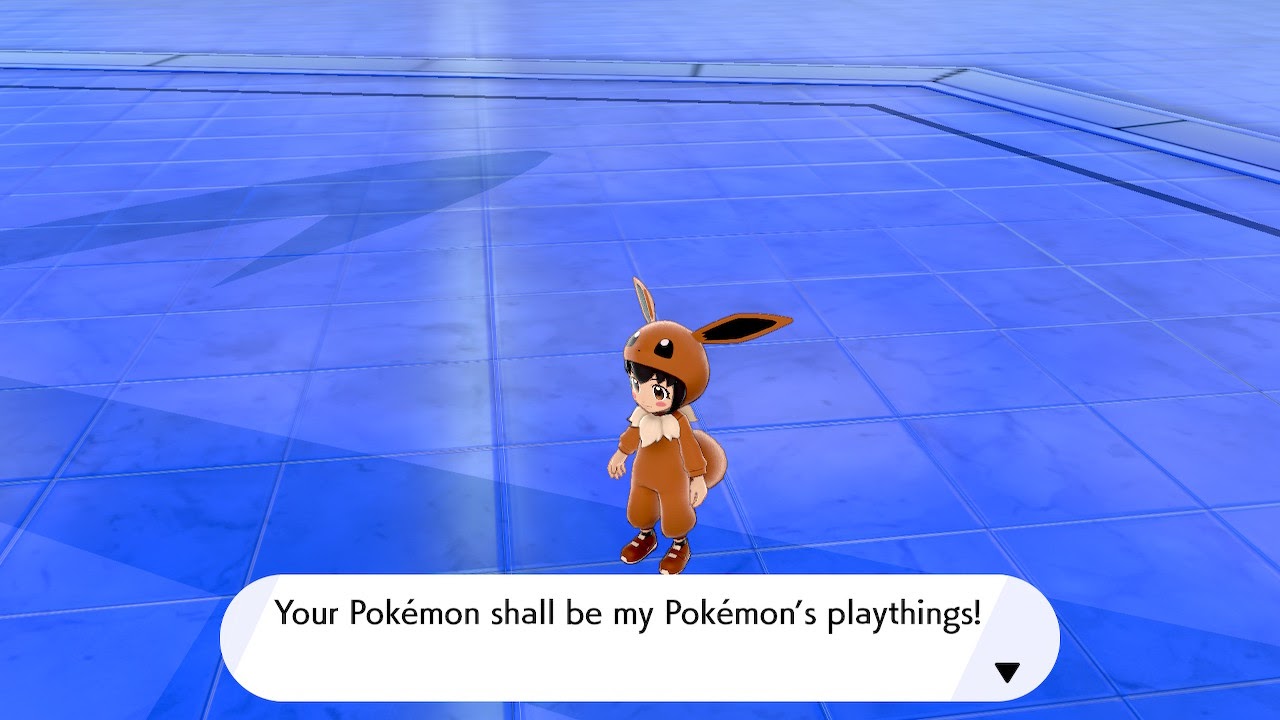 No one should be surprised that I would call Pokémon Sword and Shield my top pick of the year. The only purpose for me doing this is to get it in writing but otherwise, yes, I really loved this iteration of the series. The reasons why I enjoyed it so much have practically nothing to do with the hyped-up gimmicks like Dynamax battles or the shift to console. On the one hand, things like story and environment design could have been much better, and on the other hand, I never want to go back to the old games after experiencing all of the quality-of-life changes made in Sword and Shield. Details that casual players won’t care about or ever become aware of like paying for max EVs with vitamins or using mints to change Natures have completely changed the game for anyone serious about raising Pokémon. If I were asked if these improvements were worth losing over 400 Pokémon from the roster, I would probably cry. Maybe. Maybe it was worth it. 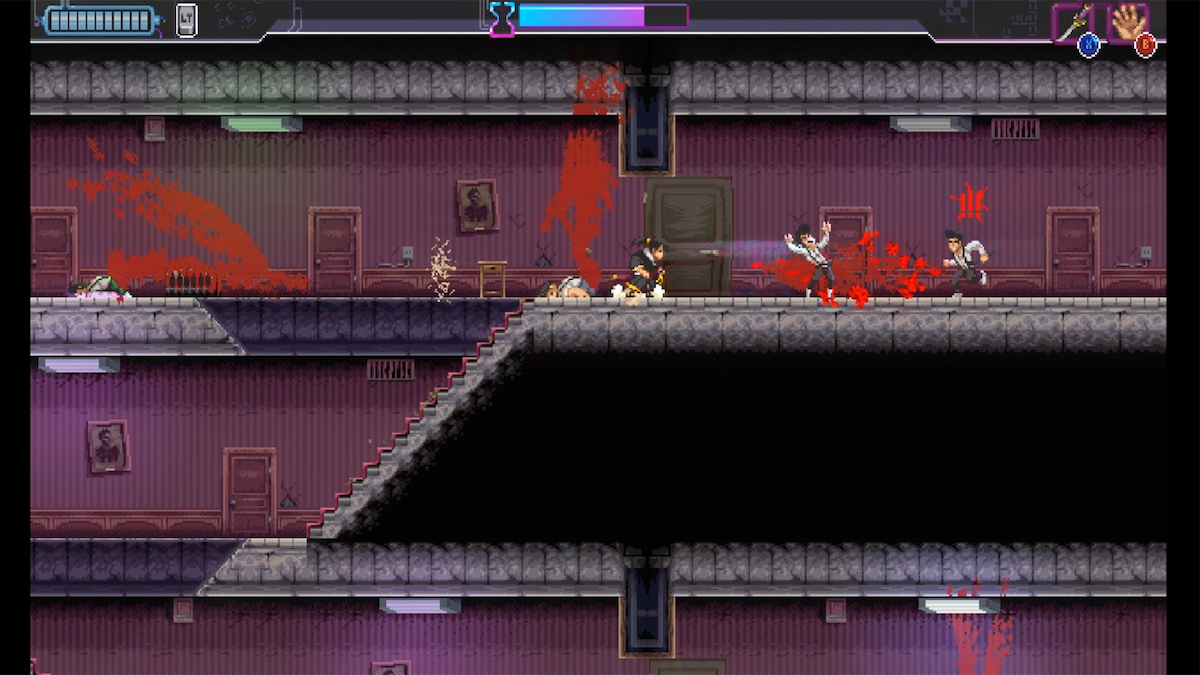 I played Superhot on a VR rig once, and it was the closest I ever felt to being a real-life action hero. In that game, “time moves when you do,” allowing you to plan out elaborate, perfectly executed lethal maneuvers in Matrix-esque bullet time. Katana Zero applies a similar concept to the 2-D action-platformer. You play as a samurai assassin in a dystopian cyberpunk future, equipped with a power that allows you to rewind time when you die and slow it down while in combat. The former is mostly experienced as a simple respawn mechanic, but the latter is what turns Katana Zero into a unique hybrid of a puzzle and action game. Each room is filled with bad guys who can one-hit kill you, sometimes so many that defeating them all would be impossible using standard action game timing. Slowing things down, however, turns the game into a sort of puzzle, and allows you to link up dashes, wall jumps, sword slashes, and projectile throws in the span of a second or two. When the game plays the room back in real time, you really do feel like some kind of superhero. It doesn’t hurt that the whole thing is wrapped up in an impeccable audiovisual package, featuring intricately animated pixel art, pulsing electronic music, and a clever dialogue display system that combines animated and colored text. The story is pretty standard stuff for the genre, but the surprisingly funny dialogue does a great job cutting the melodrama. It’s nothing groundbreaking, but Katana Zero is a clever, well-crafted little action game. 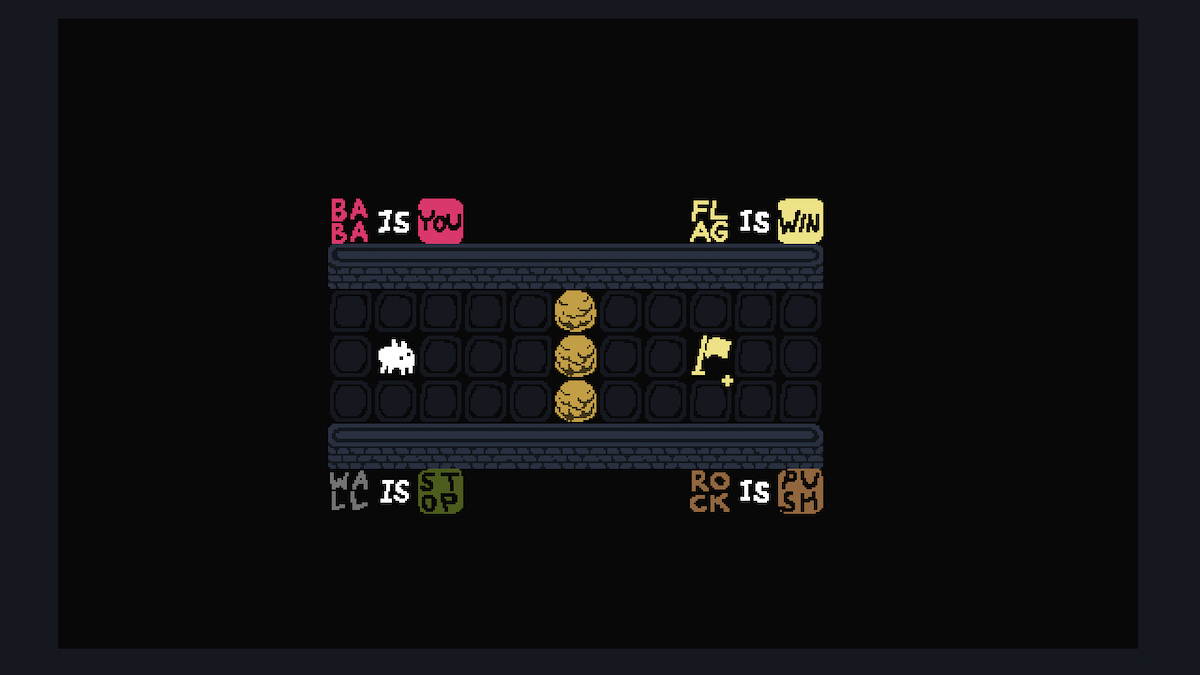 I tried Baba Is You for the first time at a friend’s place, and was instantly sold. After just a few levels, I told him, “this is a game for game designers.” The core mechanic is deceptively, deviously simple: the rules defining how the game world operates are blocks within the world, and you can rearrange them. The early levels are straightforward, if abstract, plays on this concept. Form the sentence “Flag is win” and you’ve got a win condition. Break up the sentence “Wall is stop” and voila: walls are no longer an obstacle. It’s when Baba Is You takes the core mechanic and folds it in on itself repeatedly, however, that this puzzler reaches the realm of obtuse, mind-bending complexity. You can change which sprite represents the player character, or even control multiple players at once. You can separate sprites into layers that prevent them from intersecting with each other. Even the words that form the sentences themselves can be modified! Baba Is You sometimes reaches nearly impossible levels of difficulty, but since you can choose the order in which to try the puzzles, the game will never stop you dead in your tracks. This kind of bizarre, postmodern weirdness is exactly what I come to indie games for. 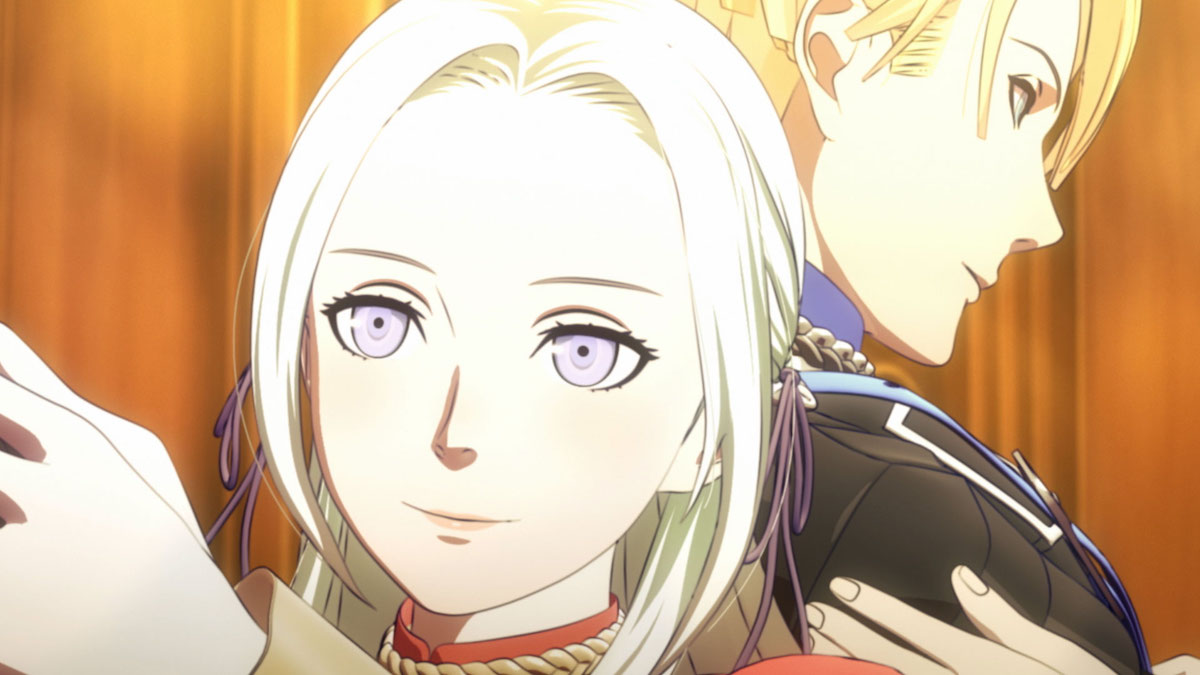 I never even finished the easiest half of Fire Emblem: Fates (Birthright), but I was glued to Awakening on the DS, my introduction to the franchise. In Three Houses Nintendo and Intelligent Systems aren’t even pretending that Fire Emblem is anything but a dating sim; you play as a part-time professor, part-time general, and the tactical RPG battles are interlaced with segments where you have to run around your home base talking to all of your students/units (fully voiced this time). At first this cumbersome back-and-forth, combined with a bevy of new combat mechanics, can make Three Houses feel like a game trapped between two conflicting identities, but after a few hours it clicked for me. All of the game’s seemingly mismatched systems, from the battalions to the tea parties, talk to and reinforce each other. Building relationships between your units boosts their stats and opens up opportunities to train them in new skills, all of which make them more effective in battle. Then their battle experience alongside their comrades feeds right back into their relationships. These mechanics have been around in some form since at least Awakening, but here they meld together like never before. Three Houses is a bewildering and sometimes overcomplicated successor to the Fire Emblem legacy, but the whole mess somehow comes together into a spellbinding experience.

Check out our 2019 Manga Staff Picks as well!