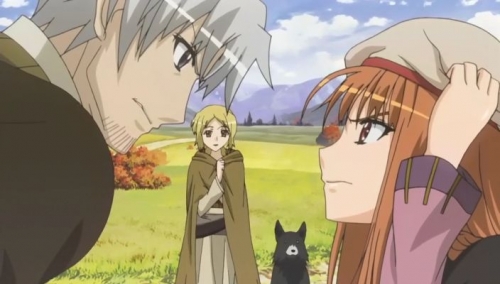 What's that? SIX MONTHS? Well, if you listen to the Ani-Gamers Podcast, I guess you're probably used to super-long waits by now. Anyway, we're back, and we're starting off the year 2012 with something very timely and totally not recorded in the spring of last year: a review of the 2008 Spice & Wolf anime with Evan, Ink, and THEM Anime Reviews' very own Bradley C. Meek. Prepare for economics, wolf girls, and infuriating moé shepherds. That, plus a few mild spoilers, but there honestly isn't much worth spoiling in this show. (Check the show notes for timecodes if you're really spoiler-phobic.)

We're also trying out some new intro and outro music, so we would appreciate some feedback on those from our listeners.

[01:53] The review begins with a summary of the setting and characters of Spice & Wolf, and some of our general impressions.

[11:17] We start by talking about the sly wolf goddess Holo.

[16:27] Next up is our straight-man protagonist, the trader Kraft Craft Lawrence.

[29:35] Evan gets super-angry about Nora, the shy shepherd girl.

[37:27] Incredibly mild spoilers about the final scene in season one.

[39:16] We talk about the animation, background art, and some of the music in Spice & Wolf.

[48:08] "The awkward ending." Twitter: @AniGamers, @VamptVo, @AnimatedInk (Ink has split his accounts between poetry and anime since this podcast was recorded), and @BradleyCMeek.