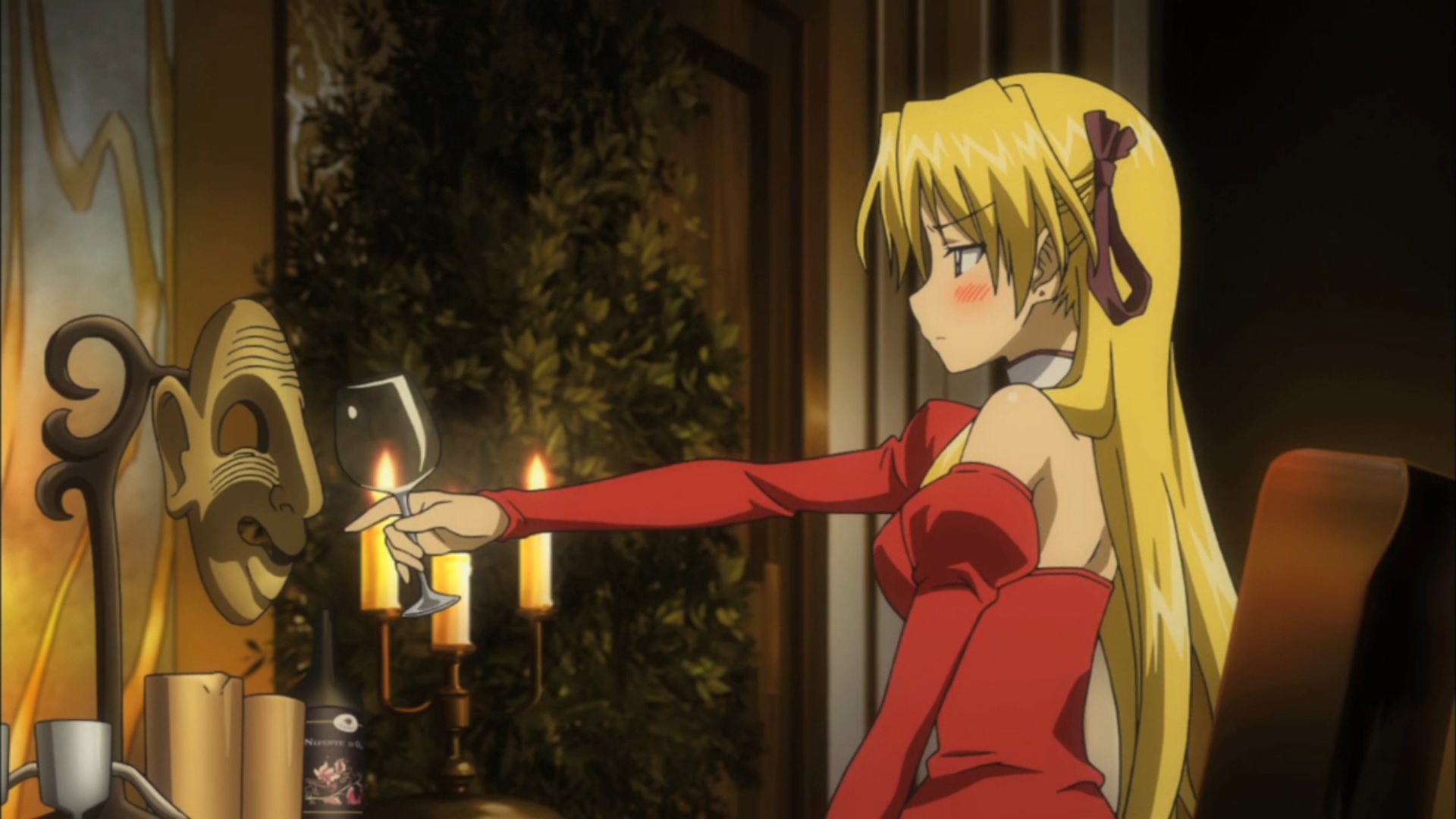 For three and half years, I’ve been having fun pointing out great drinkers and great moments in drinking as well as picking apart depictions thereof in print and animation, but only once did I ever allude to a not-so-great moment. That is this month’s moment, because I’m sick of suppressing it, because its faults need to be explored to right the reputation of the effects of fermented grapes, and because the scene’s execution (at least) has some merit. So without further ado, I present to you a (not so) great moment in drinking from the very first episode of (insert sigh here) Campione!.

First off, I’ll fully acknowledge the photorealistic, Drops of God-esque strength with which this scene begins. To fully understand the competency behind the juxtaposition, however, requires, of course, some context. Erica Blandelli, a knight of the black copper cross (no, you don’t need to know), discovers an inexperienced (with magic) young man — Godou Kusanagi — in possession of a very powerful stone. He’s naught but a naïve courier at the time, but when he espies a rogue god in the shape of a giant flaming boar that’s wrecking the city, Erica knows he’s got that something special worth clinging to. (Saving her from possibly falling to her death at the last minute doesn’t hurt either.) 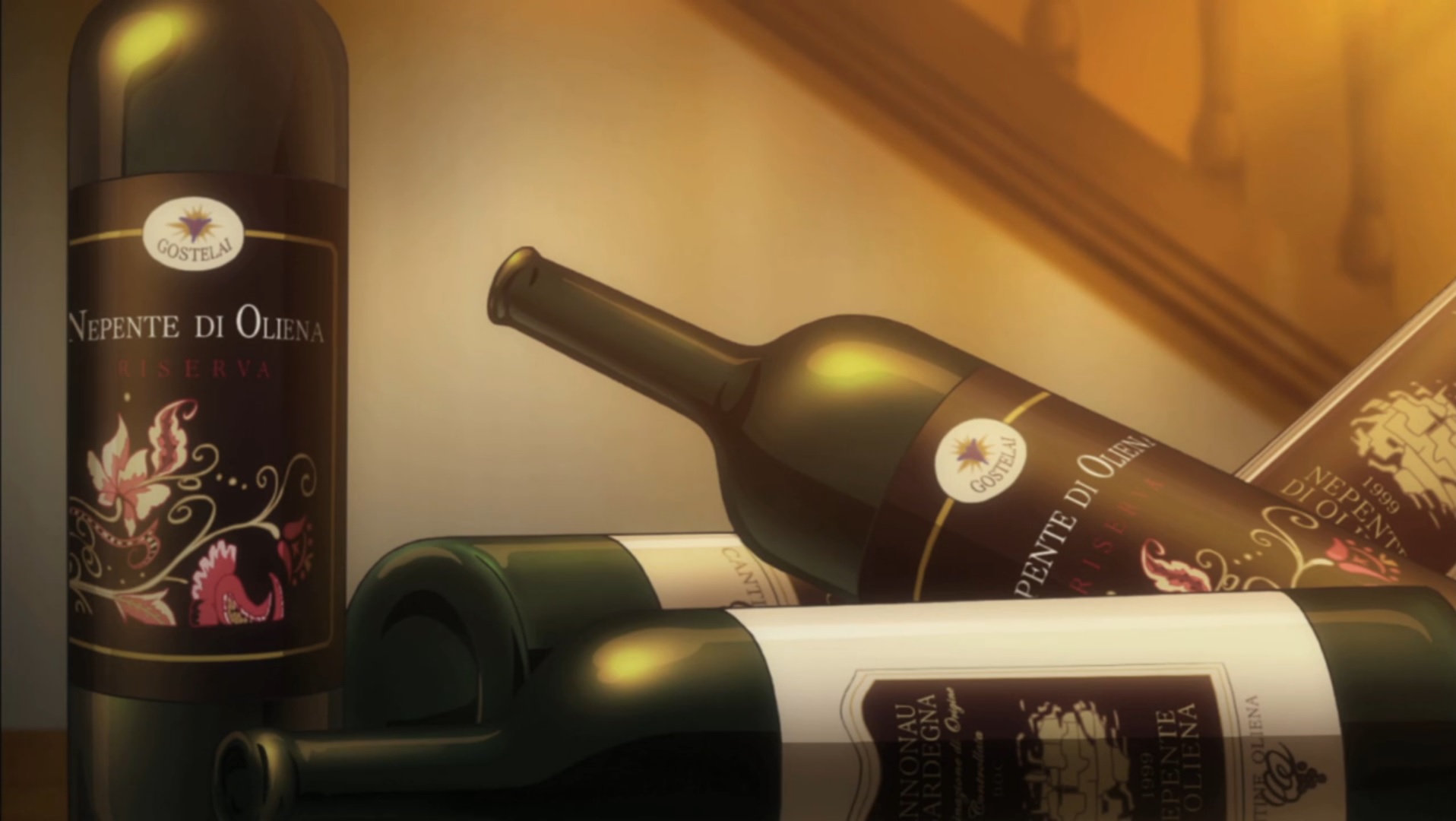 It’s no wonder then, after an adrenalin-rousing bit of battle and one indebting instance, Erica decides to be Kusanagi’s escort to his destination: a rendezvous with a scantily clad enchantress. No-one should have been able to predict that said witch would be lazing around in lingerie, but Godou’s reaction is as transparent as the aforementioned unmentionables. Add to this the fact that the witch gives the powerful stone back to Godou despite Erica’s protests, and the stage is set for a great(ly exaggerated) moment in drinking.

Smote by both the older woman’s authority and allure before the boy, Erica Blandelli (seriously, I never even noticed that flavorless family name until now) returns to her mansion with Kusanagi and drowns her frustrations in bottle after bottle of vino as evidenced by the empties in the first shot after the break and Erica’s ever-beckoning glass. To both aspects, I will yield the scene’s competency; I have seen many a drinker fall into a bottle after losing a competition for attention, and so long as a true drinker is conscious, their empty glass is always one in want of filling. My objection is to the idiocy that follows. 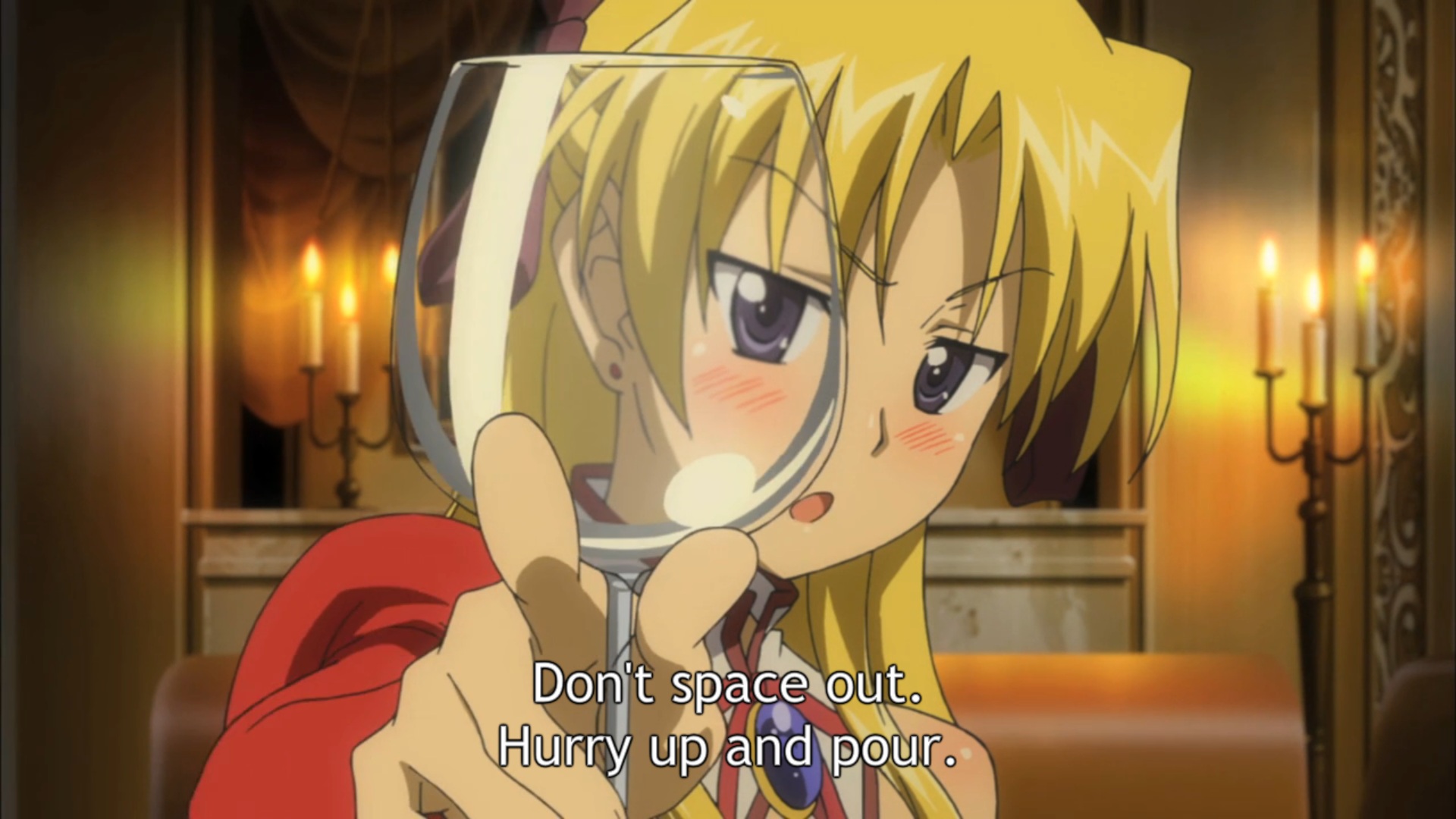 “A drunken stupor” is probably the phrase most often associated with the condition of those who over-imbibe, but depictions in media of the degree to which drunkards lose their individual wits whilst wasted are grossly exaggerated. Erica Blandelli, case in point, carries on a conversation with a suspended mask sitting atop a table despite the projected voice coming from behind her. No matter how drunk a person may be, their ears will effectively triangulate the origin of sounds. Depending on the degree of intoxication, however, eyesight’s whacked horizontal/vertical hold could cause confusion once the audio is taken into account. But in this scene, Erica sits perfectly still, insusceptible to the wobbles nominally associated with alcohol poisoning, and insists the inanimate object before her is the origin of the voice actually speaking to her. In other words, the setup is completely wrong. 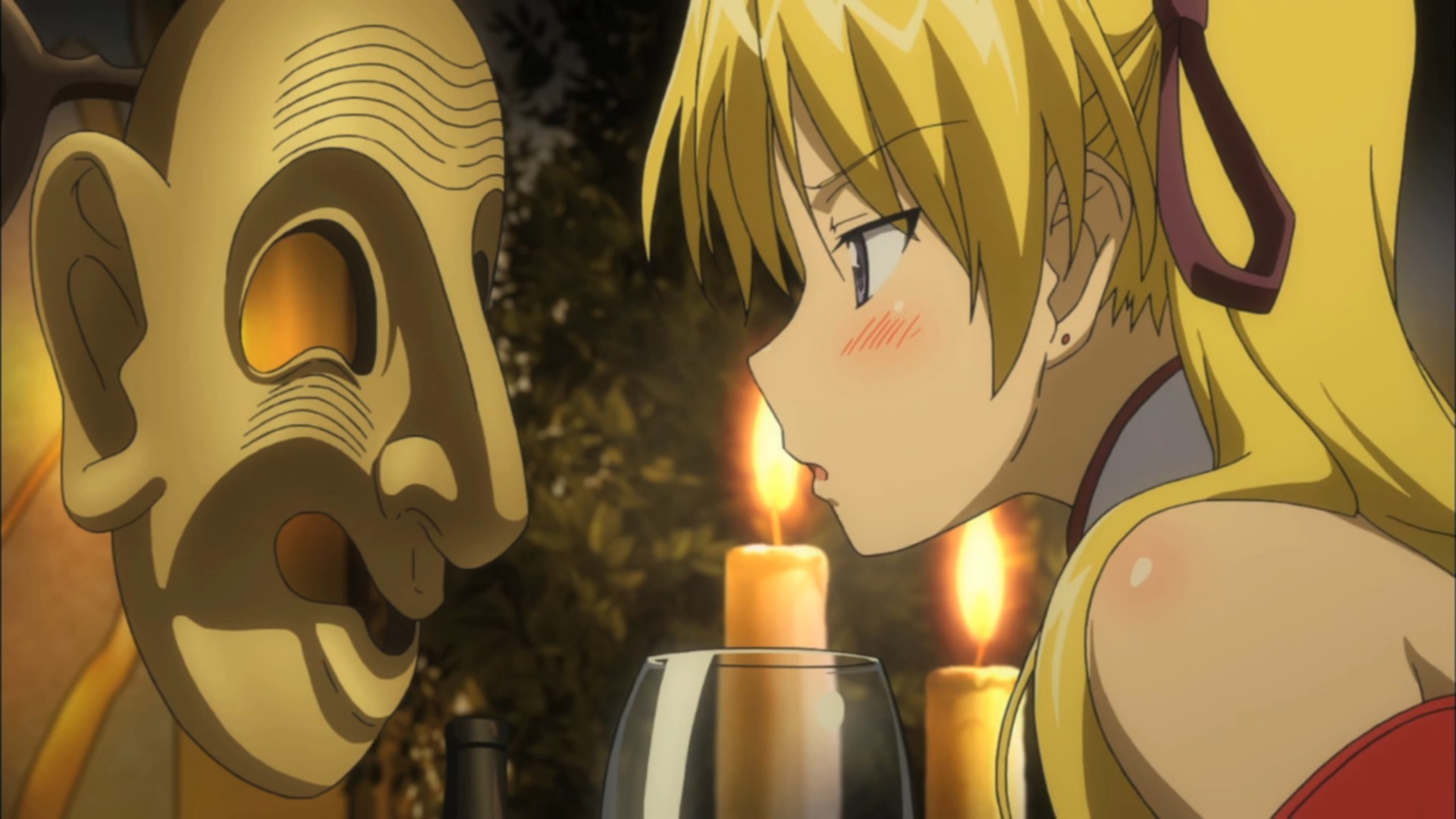 Unapologetic, the anime tries to convince viewers of this idiocy by employing different cameras dedicated to each of the speaking parties … and succeeds. One camera focuses solely on Erica while she speaks, and another camera is trained on Kusanagi as he replies. Switching between cameras adeptly represents an established conversation. But when one camera pulls back and reveals the staging, comedy ensues. At least it should according to theory. (Police Squad! used the same technique all the time and to great comedic effect for its trick framing). Instead, because of the gratuitous follow through, the audience will be taken aback not by how silly Erica is being but by how moronic the situation is. (This, I believe, is supposed to be offset by the enthusiastic manner in which Erica energetically bounces in her chair like a child mid-tantrum.) 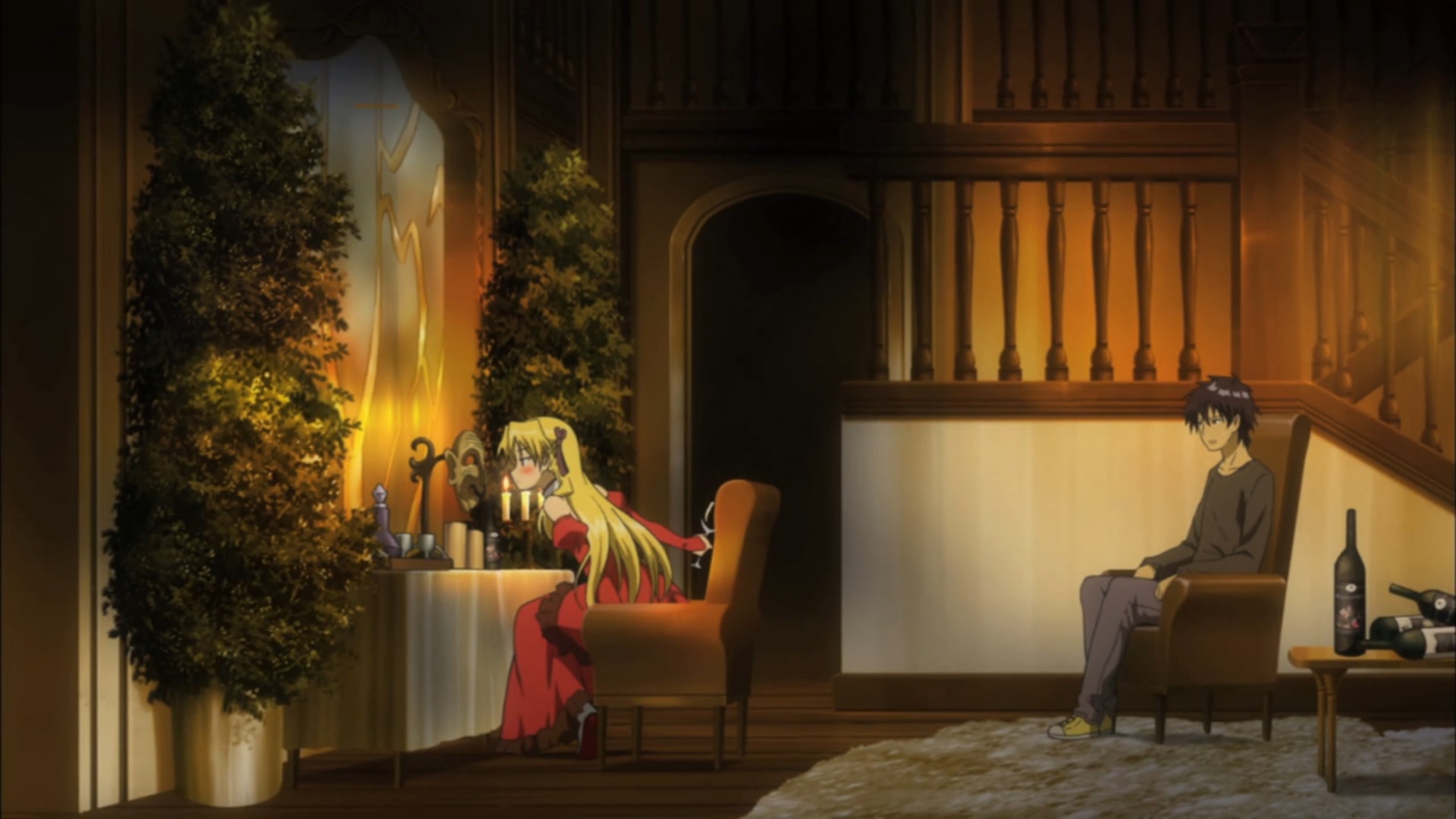 Erica is so adamant in accusing the inanimate figure before her, which she thinks is Kusanagi, of not replying to her that she actually flicks the metal mask , injures her finger, and STILL carries on a vehement interrogation. At the very least, a real drunk would recoil from the pain and reassess. Erica, however, just keeps going at it. It’s a chuckle's worth of a gag negated by the ignorance of basic human senses. It's like someone who's never gotten drunk or been amidst drunks decided to write a drunk gag. Still, there is legitimate humor here.

Kusanagi’s discontented calls of “Ericaaaaaaaaaa,” aimed at snapping her back to reality, go unheeded and instead attract another drunken reveler: the maid! Flopped back and to the side from futility, Kusanagi’s capitulated cabeza unwittingly directs his repeated addresses to the third party, but she's so blasted that she mistakes Kusanagi’s calls as directed towards her and makes fun of him for confusing her with her mistress. It's a silly gag, but it's the most believable thing in the entire scenario. And after the disappointment of the previous joke's failure, the maid's line, with its delivery and parallel but more apt execution, is the scene's only redeeming value. 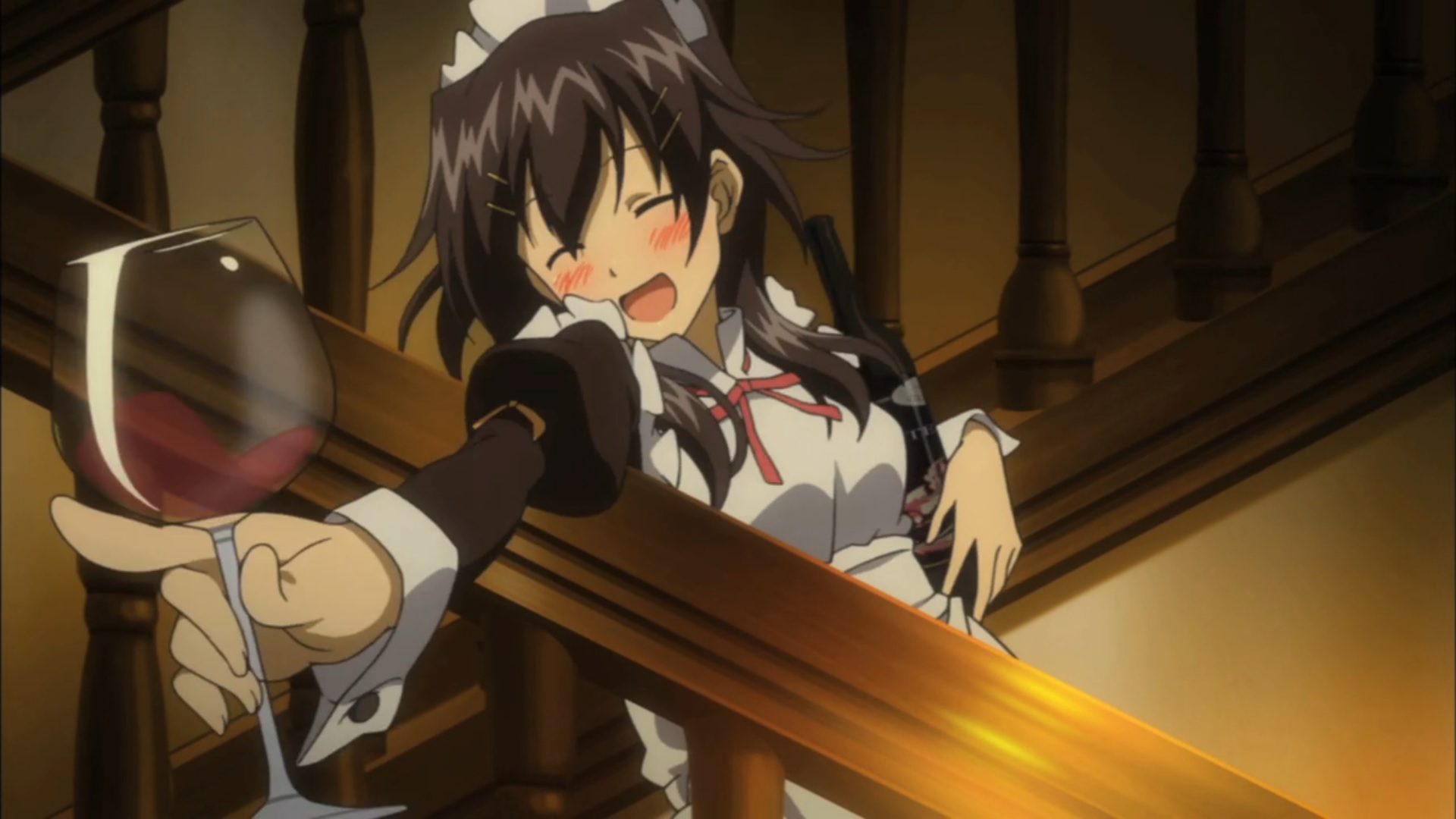