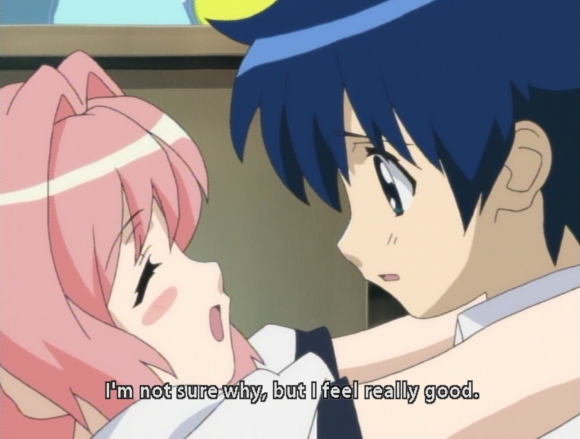 Even if they’re fun to laugh at, I’ll be the first to rail against the erroneous clichés pertaining to the effects of drunkenness as portrayed in and perpetuated by media. For instance: no amount of drink will make a person talk to a desk-mounted, suspended mask and think it’s a human being. Nor will being in such a state cause anyone to confuse the identities of people he or she knows; recently introduced strangers, however, are a different story (and maybe even then more of a light novel). Also, no cocktail, even if it’s not a cocktail and just straight up alcohol, will result in instantaneous cloning via involuntary spasmodic action (as with a sneeze or hiccup). Though, to cede the point, hiccups can be real. Thankfully, the effects we’ll be looking at in this particular great moment in drinking are not wrought by a human but a Seirenian … a Seirenese … a misplaced person. So anything goes.

Miharu is from the planet Seiren and makes a trip to Earth via bathtub portal. (Yuuuuuuup.) After magically traversing a dimensional barrier, Miharu ends up trapped with a blue-haired milquetoast boy who has an allergy to girls. Well that trip was certainly worth the effort! Small wonder Miharu seeks enjoyment at the bottom of a bottle beaker. 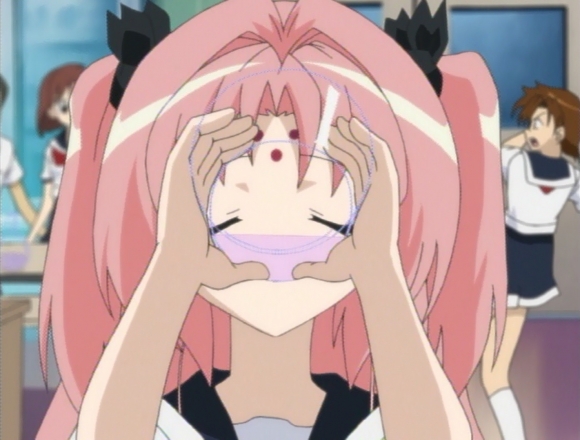 See, Miharu isn’t the brightest bulb in the box. She more akin to the bulb with the broken filament that comes in the pack of eight you can’t be arsed to return for the inconvenience of it all. Her end-of-bathtub-experience and host here on Earth, Yukinari, drags her along to his school to save his parents’ pantry from being ravaged and give Miharu something to do. What does Miharu do? Miharu drinks!

Things are all set up for an experiment in science class, but the teacher’s late. Returning to her ADD state after Yukinari stops talking to her for a few seconds, Miharu wanders over to some funny smelling pink liquid in a beaker and mumbles to herself something akin to Dee Dee’s maniacal “What does this button do?” and takes a sip. It’s delicious! She takes another sip, notices she feels pleasantly funny … and then chugs the rest of the alcohol which was intended for the class experiment. 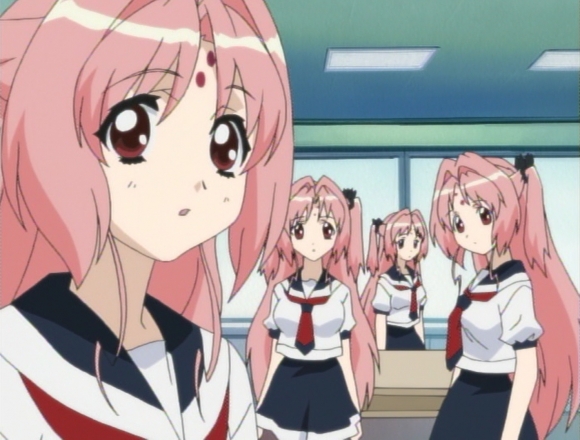 Ultimately becoming the class experiment, Miharu blushes, becomes dizzy and hot, and then passes out. For her, the world’s spinning in circles, but she’s feelin’ REALLY good when she comes to … until the sneezing starts and glass starts to shatter. Evidently, according to anime, aliens cause sneezesplosions when they drink! But things don’t stop there. As the drunk settles in, Miharu sneezes more and more until, with one final sneezeplosion, she replicates herself into a swarm of clones that explode when touched by any human. I’ll spare you the “She’s da bomb” joke.

So what do we learn from this great moment in drinking? For one, aliens are bravo because inebriation turns them simultaneously clingy and volatile—like camouflaged magnetic boob mines. And two, the only way to abate the drunken threat posed by the popping of myriad airheads is to dress a lecherous pervert with an inexhaustible libido in a banana costume and let him loose to wear away the sheath, along with his pride, by sheer, unabashed friction.