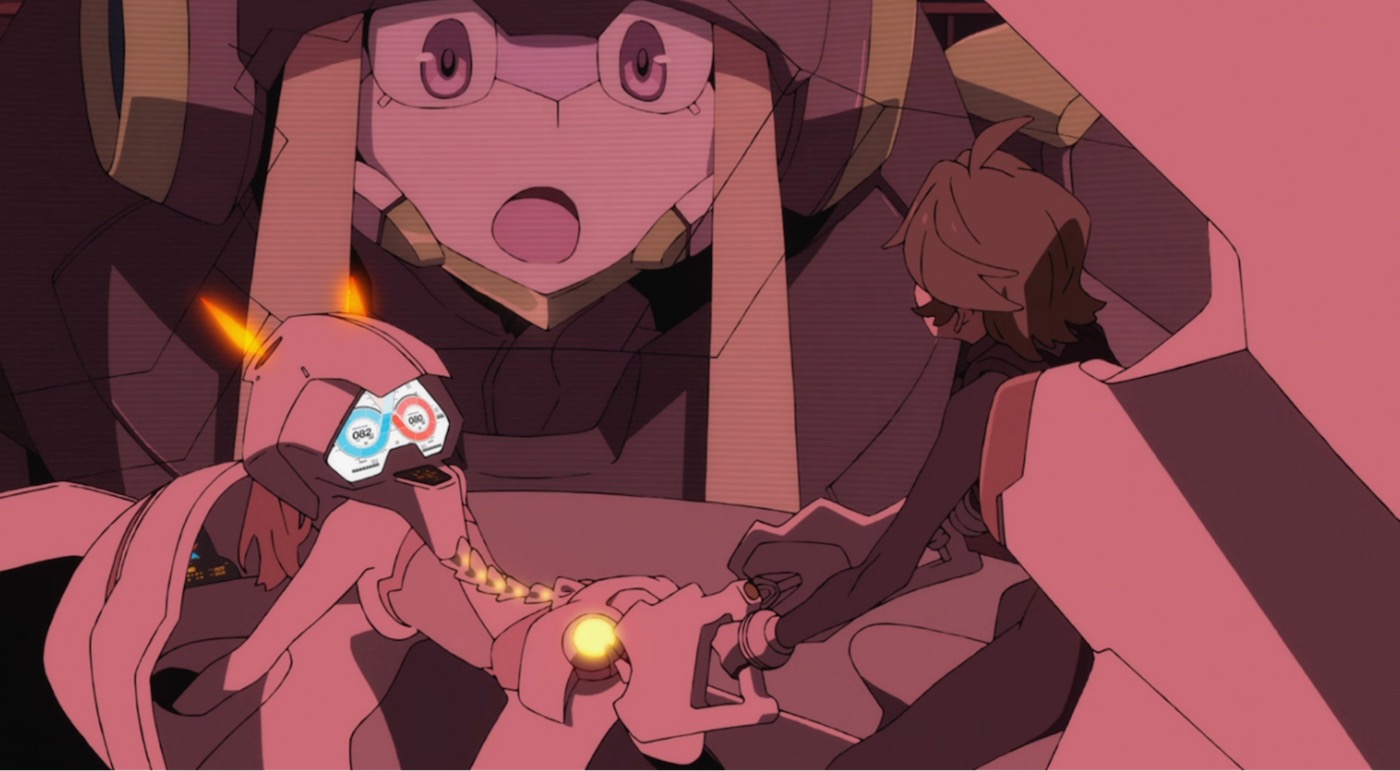 DARLING in the FRANXX

I’m a big fan of Studio TRIGGER, but there’s a difference between their original series and their adaptations and partnerships. DARLING in the FRANXX sits somewhere between the two: it’s an original co-production with A-1 Pictures. On the plus side, Gurren Lagann and Panty & Stocking character designer Atsushi Nishigori (one of the members of the “Geek Fleet” gang of ex-Gainax creators) is directing, with his buddy Hiroyuki Imaishi (Gurren Lagann, Kill la Kill) in charge of the action scenes. Heroman and Inferno Cop designer Shigeto Koyama is handling mechanical designs, while anohana and your name.’s Masayoshi Tanaka is in charge of characters. So it’s no surprise that DARLING in the FRANXX is stylish and colorful, with more than a little resemblance to some classic Gainax series. Unfortunately it’s not quite as ambitious as the rest of TRIGGER's projects so far, but it is horny as hell, with the characters jacked into cockpits in male-female pairs and assigned designations of “pistil” and “stamen” (to say nothing of the butt handlebars). If Imaishi were in charge this would be played for laughs, but so far Nishigori is keeping a pretty straight face. I’m cautiously hopeful that the series has more interesting developments in store. At the very least, Darling is real nice to look at. Also, it’s TRIGGER, so I’m incapable of dropping it. 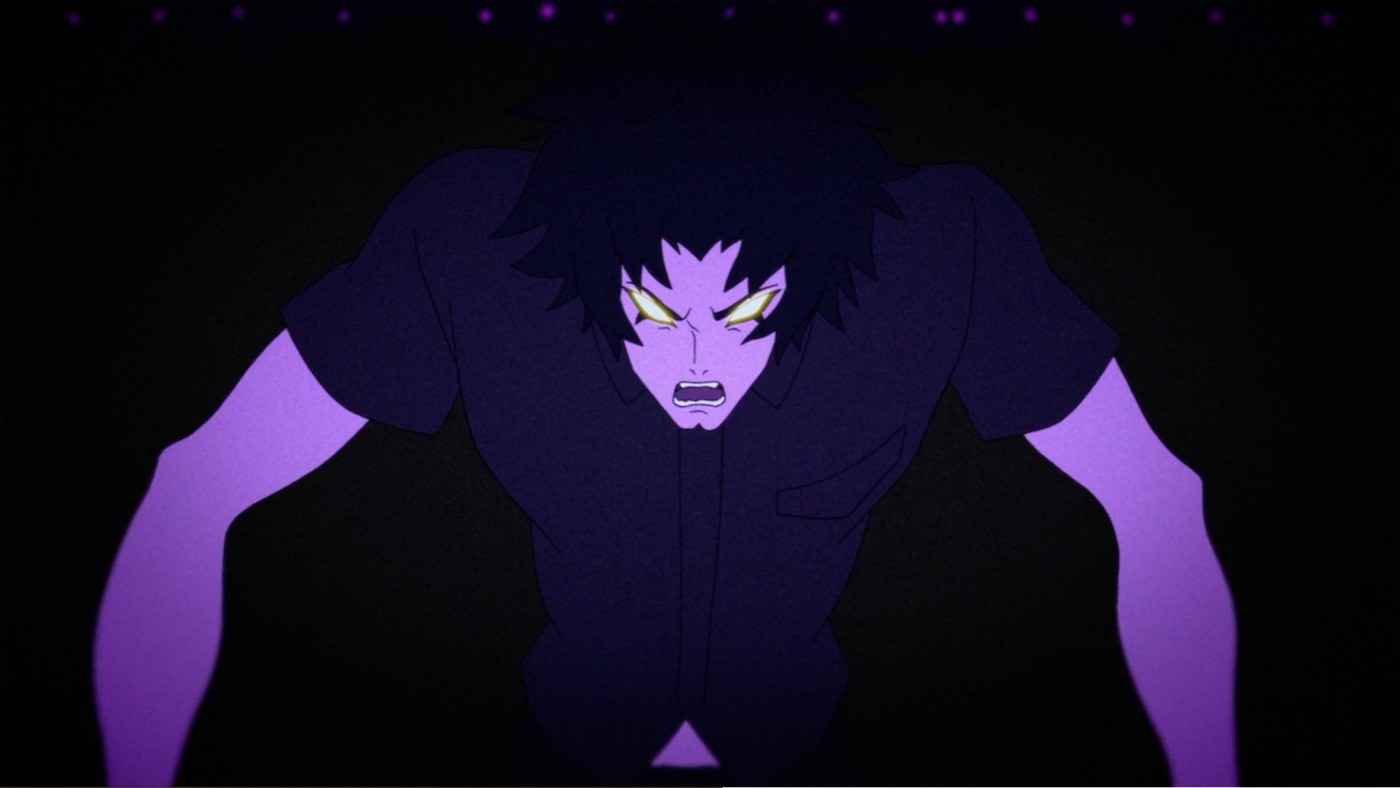 Believe it or not, I haven’t finished Devilman Crybaby yet. The whole thing dropped all at once a few weeks ago on Netflix, but I’m not nearly as into binge-watching as many people my age, plus I’ve been busy! That said, let me tell you, there’s a reason why everybody fell in love with this series. Masaaki Yuasa makes great use of his undulating, expressionistic animation style to bring the monstrous world of Go Nagai’s series to life, but it’s restrained enough that it’s digestible for mass audiences. The designs and situations are reimagined for a more modern audience, with attractive new incarnations of all of the main cast members, but Yuasa smartly maintains all of Nagai’s cartoon exaggeration and his dirty sense of humor. Yes indeed, this is Not Kids’ Stuff, full of sex and drugs and hyper-violence, and I couldn’t be happier. The more serious action and drama seem to be building up really well so far as well, but above all else, Devilman Crybaby is incredibly fun to watch. It’ll take me forever to get through it, but I’m sticking with this one all the way. 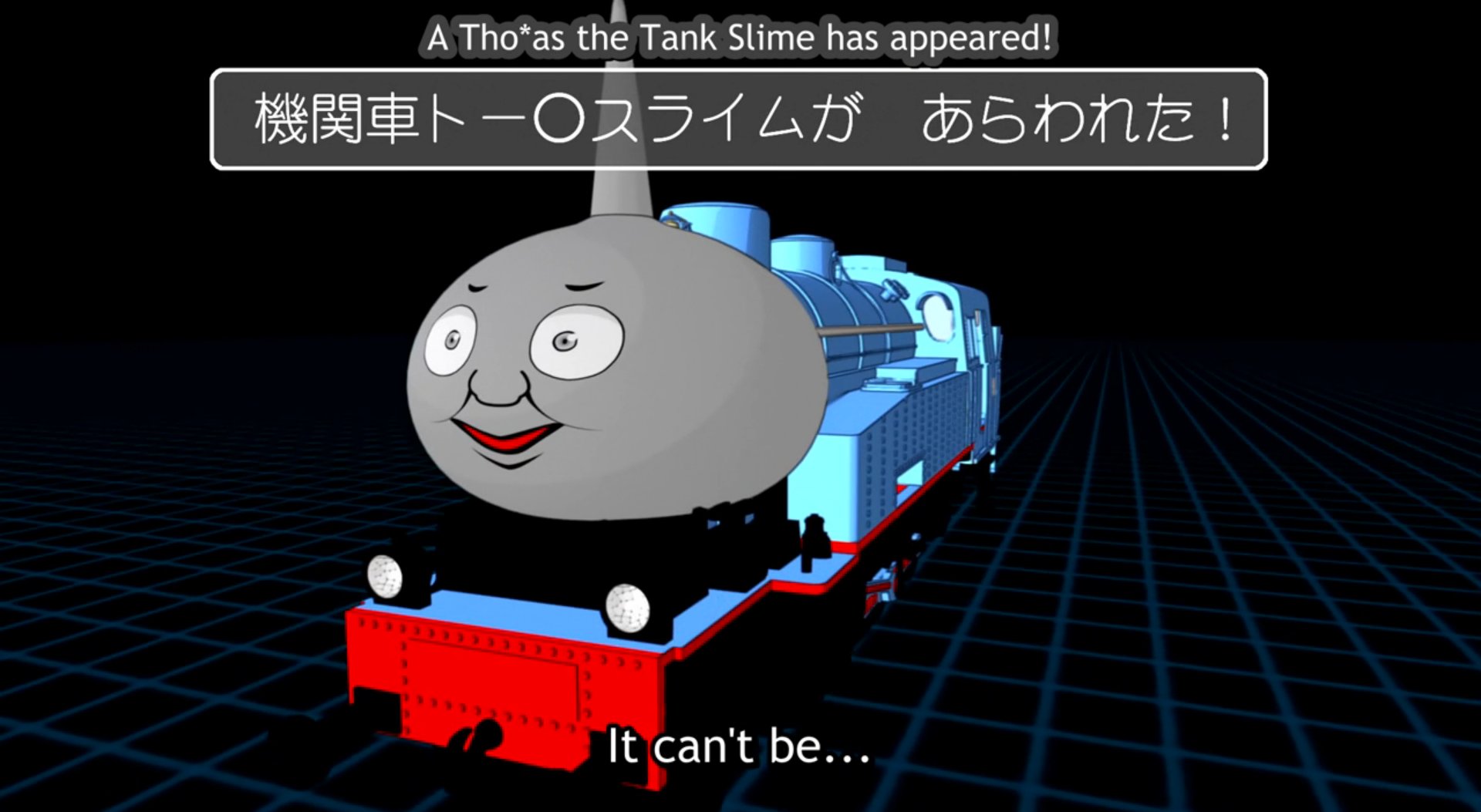 It’s hard to believe it’s been almost four years since the original gdgd Fairies ended. It was never really popular outside of a small group of weirdos like me and David, but it’s one of my favorite anime comedies, and now it’s back! The format is pretty similar to last time, but instead of three 3-D animated female fairies goofing off, it’s three male adventurers trapped in a fantasy video game. Men’s Party has its equivalents for all the old segments: a virtual reality magic zone where the heroes conjure up ugly, premade 3-D models, a magic staff that summons images from another world. It’s at its best in the latter segments, in which the voice actors break character and do improv skits to dub over the silent footage. Unfortunately the scenes outside of that haven’t been as out there as the original gdgd Fairies, but it may just be a case of the writers and actors getting warmed up, as was the case on Fairies (both series seem to be largely made up as they go along). Plus, the one new addition, a segment showing the imprisoned princess staving off boredom in her jail cell, is really funny, so that makes up for deficiencies elsewhere. This is a solid start, but I’m looking forward to seeing how the cast and crew improve on it. 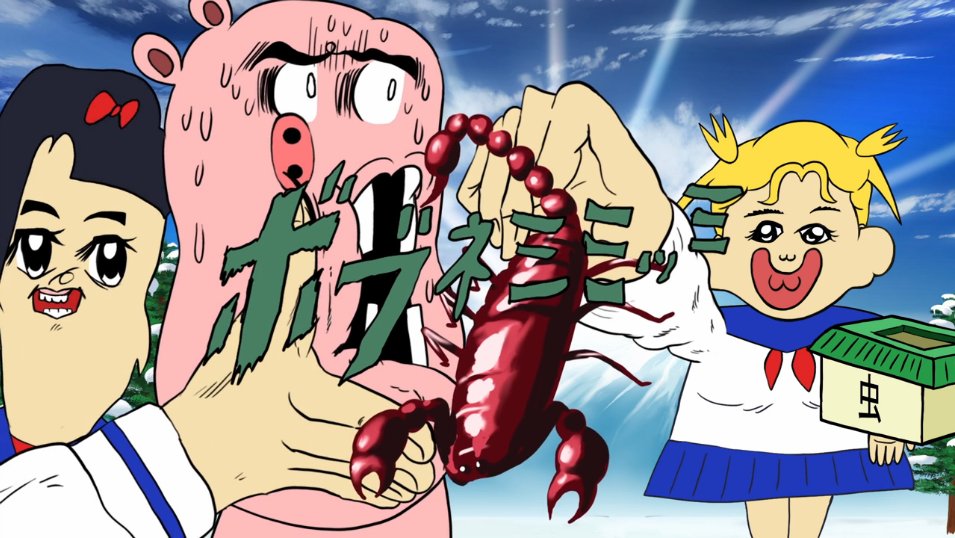 Streaming on Crunchyroll, FUNimation, and HIDIVE

I haven’t read the Pop Team Epic manga (not counting occasional sightings of individual strips online), but I’m loving its new anime adaptation. I originally expected a fully 3-D animated series from Kamikaze Douga, but what we got is even better. Pop Team Epic is technically credited to Kamikaze, but they’ve contracted it out to a bunch of different studios for separate segments inside the show. The result is a manic animated sketch comedy with widely varying visual styles. Some sketches use Kamikaze’s cel-shaded 3-D animation, others a simple digital 2-D style. There are even sketches drawn in crude, incredibly ugly off-model artwork, stop-motion sequences, and even some live-action. The jokes are a mix of anime parodies and obtuse anti-humor that isn’t always even very funny, but what makes it so captivating is how unabashedly weird everything is. Pop Team Epic is experimental comedy, and there’s really nothing like it in anime. I’ve been an evangelist for exactly this kind of bizarre anime for years now, so I couldn’t be happier to see it taking off.