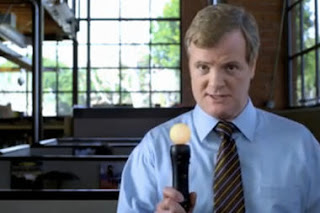 Sony's press conference certainly ran a little bit too long for my taste, but it was much, much more entertaining and useful than Microsoft's trainwreck just a day earlier. If you're into audio rather than text, why not listen to our Sony press conference wrap-up podcast with me, Elliot, and Kit? Or, if you're a text guy/girl, head after the break to check out all of the details on the new PlayStation Move motion control accessory, the surprising announcement of the integration of digital distribution service Steam on PlayStation 3, and Sony's new Xbox Live-esque premium subscription service for PSN. Either way, it's sure to take less time than the actual conference.

As Nintendo wisely did with their press conference, Sony left one main presenter in charge of the proceedings, which was Jack Tretton, President of Sony Computer Entertainment America, in their case. Early on in the conference, Tretton discussed Sony's dedication to 3-D gaming, showcasing gameplay footage (and a Feburary 2011 release date) from Killzone 3. Most importantly, though, the PlayStation 3's 3-D capabilities will only work if you a) buy a 3-D television and b) buy 3-D glasses. With the unveiling of Nintendo's 3DS less than three hours prior, it was pretty difficult to take any claims of traditional 3-D seriously.

Speaking of major changes to the PS3, Sony simply wouldn't stop talking about PlayStation Move, the new motion control device that uses a glowing ball at the end of what is essentially a Wiimote to track movement in 3-D space. The Move wand itself will hit stores in the fall of this year: September 15 in North America, September 19 in Europe, and October 21 in Japan. In terms of pricing, I was surprised to see fully fleshed-out details from Sony, including prices for the wand ($49.99), the suspiciously-similar-to-the-Wii-Nunchuck "navigation controller" ($29.99), a bundle with the Eye camera, Move controller, and Sports Champions game ($99.99), and finally a bundle containing the contents of that bundle with a PS3 ($499.99).

Yes, that's right, you have to purchase three accessories the wand, navigation controller, and Eye camera to play a first-person shooter like, say, Killzone 3, with the Move. And as luck would have it, Killzone 3, Ruse, NBA 2K11, Time Crisis, and Echochrome will all have Move functionality on launch day, while games like Resident Evil 5 will receive software updates patching in the optional Move controls.

Sony is also now poised to offer a premium subscription service on the PlayStation Network (PSN) called "PlayStation Plus" that will provide "exclusive digital content" such as preferred early demos, discounts on products in the PSN store, early access to betas, and even some free game downloads. The service will cost $49.99 for a year and $17.99 for three months, very much like Microsoft's Xbox Live Gold service, but PSN gamers can still play online without subscribing to PlayStation Plus. PlayStation Plus will be available "later this month."

To promote their slate of third-party titles, Sony brought in EA Chief Operating Officer John Schappert, who announced "unprecedented support" for the PlayStation 3, including, um, "exclusive, limited-edition, PS3-only" versions of Dead Space 2 and the Medal of Honor reboot? That sounds pretty precedented if you ask me. After a few more trailers from EA, we were left with release dates for Dead Space 2 (January 25, 2011) and Medal of Honor (October 12, 2010) as well as confirmation of "unlockable beards" in the latter. Yes, my friends. He said UNLOCKABLE BEARDS.

Finally, the most important announcement of all to many gamers, even those who don't own PS3s: Gabe Newell of Valve stepped onto the stage and put down many of his gripes with the PS3 (while, I can only assume, simultaneously picking up a large bag of money) in order to announce that PC/Mac digital download system Steam will be launching on the PlayStation 3. We don't quite know how it's going to work, or even if your games purchased on PC will carry over to PS3, but we do know that Portal 2 will be coming out on it! The trailer shows some serious promise, but I'm going to need to see more before I'm sure if I'm interested or not.

In the balance of the conference, Sony managed to announce "PS3-exclusive day-one content for Mafia 2," a PS3-exclusive pack of missions and a November 16, 2010 release date for Assassin's Creed: Brotherhood, a November 2, 2010 release date for Gran Turismo 5, and finally ... a new game in the Twisted Metal franchise on the PlayStation 3. Phew! Overall, the press conference felt much more disjointed than Nintendo's, since most of the announcements were cut up among multiple speakers and trailers, but it contained enough information to keep hardcore and casual audiences interested (at least until they fell into a coma from sitting way too long at one conference).