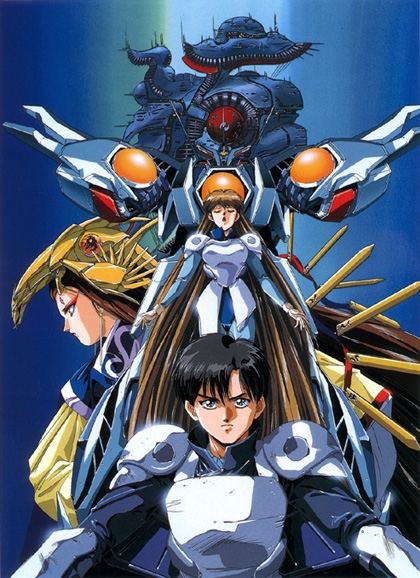 Good God, why do I do this to myself? Some anime I watch leaves me wishing I'd never bothered. It’s not that it’s bad, it’s just that not much actually happens. When it’s a drama or a thriller, you tend not to notice. But when it’s a mecha show, the fact that the show can have a giant robot hitting something and still be boring seems hard to believe. But that’s what AIC achieved with a flawed adaption of what was already a weird manga. Meet Hades Project: Zeorymer or Zeoraima: Project Hades in the West. Manga Ent. is lying to you when they say it’s like Evangelion. You, Zeorymer, are no Evangelion, and you, Masato Akitsu, are no Shinji Ikari.

You, Zeorymer, are no Evangelion, and you, Masato Akitsu, are no Shinji Ikari.

In future Japan, the national budget allows for hi-tech underground bases the size of aircraft carriers near Mount Fuji, kids can be locked up in jail Gitmo-style, and habeas corpus is gone, baby, gone. Masato Akitsu has just been arrested by the Japanese government. Not the police. Not the army. The Japanese government. But don’t worry, there’s a cute girl called Miku on hand to smile and say something before Masato passes out. Anyway, there’s this organization that wants to bring the underworld to life. They’re called the Hau Dragon, and they’ve made an evil version of Microsoft (called ICC here) as a shell corporation so they can control everyone’s computer and then rule the world. Then why I wonder, do they blow up the ICC headquarters in the first five minutes? Oh well. Long story short, the only way for the Hau Dragon to rule the universe from beyond the grave is to have the strongest warriors pilot massive mecha robots and enslave the world … maybe? In order for them to do this, they need a man called Masaki Kihara, who designed the robots, and the pilots. But he destroys the robots and flees with an embryo to the Japanese government, giving them the Zeorymer. After 15 years, the Hau Dragon are ready to move, but so is the government. 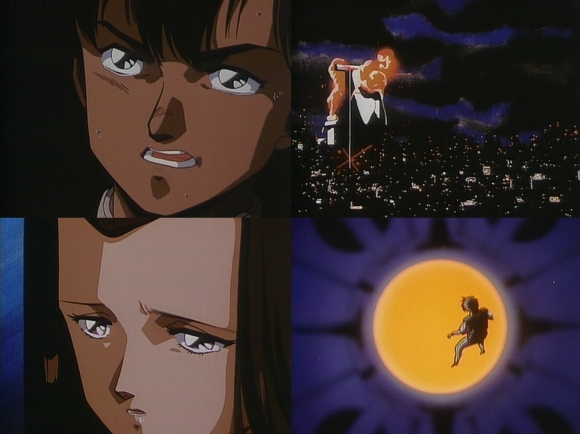 If I made the last few sentences seem exciting, don’t get your hopes up. This show is not. Soon after being arrested, Masato is given a chance to escape only to find his way into the secret base … which they could have driven him to anyway. Apparently, his minder, Mr. Oki, wanted to see if he had the Right Stuff or something. Because being able to escape from a bunch of guards in a van who know you’re going to try to escape is truly a benchmark to piloting a mecha. Oh, who am I kidding? The only benchmark to pilot a Gundam is to have a penis and to have had your family murdered in front of you. So Masato has his family taken away from him (or bought off) and has to pilot this robot. Turns out he also needs Miku to co-pilot with him, and she has to be naked while merged with Zeorymer to fight as one cohesive—oh my God, are you fecking kidding me!?! It’s bad enough that Masato has a winge and then climbs into the machine, but after showing how kick ass she is, Miku is reduced to being naked while tortured, and subsequently meek and mild when around abusive men. It’s like they make her out to be this amazing girl who can handle herself but who then gets scared and decides she needs to be loved up by Masato while he turns psychotic.

You see, soon after he climbs into the cockpit, the ghost (downloaded or otherwise) of Masaki starts controlling him and he begins to kill his own creations, the cloned warriors or Hakkeshu, as they challenge him in combat with their own robotic fighting units. At some point, Masaki takes complete control over Masato’s body, and Oki and Miku realise that he’s stalling for time—hoping the Hau Dragon will wipe out the world's population so that he can rule the world. We know this because Masaki starts acting liking emo Peter Parker from Spiderman III. OK, maybe not dancing or anything, but, Jesus, if you could clone a smirk, he’d be it. He threatens Oki, who suddenly turns into a mere paper pusher and not the no-nonsense military genius he’s been for the past twenty minutes. Also, Masaki keeps trying to rape Miku as soon as they’re alone together. Here’s another revelation: Miku is a robot herself, designed by Masaki to control the Zeorymer (as Masaki can’t control it all himself). So after he made her into a young girl robot, she was aged (can a robot age?) by the government into a nubile teenaged robot for some reason that’s never explained. Thank goodness she’s been aged up, because Masaki mauling her breasts and trying to kiss her would be SUPER AWKWARD if she was still a child. 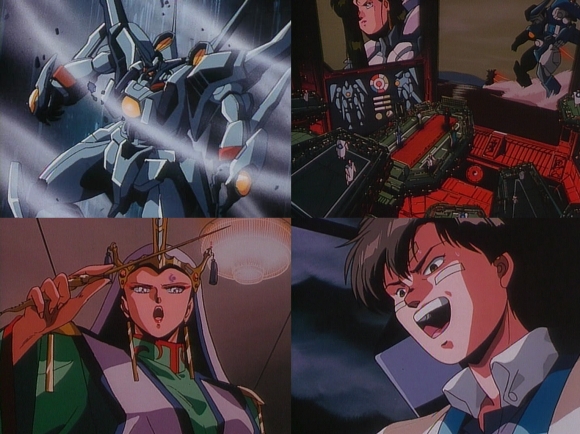 At this point, I didn't even notice the amount of pilots on the bad guys' side dying because, if I’m being honest, I wanted all of them to die. The world goes to hell once Yuratei, the leader of the Hau Dragon, approves a scorched earth policy among her health care reforms and some badly needed educational programs. At the same time, Oki goes on bended knees and asks Masaki to fight the forces of evil. He says no but then has a massive headache. (God, can’t someone get this guy an aspirin?) Suddenly, Masaki’s back being Masato again and climbs into Zeorymer one last time, but not before having a tender moment with Miku as they ascend to confront Yuratei in her flying super fortress that she nicked from the Zetradi. There, Zeorymer destroys all the defenses of the fortress, and Yuratei stands waiting for the end. There’s a blinding white flash, a quick pan out from a fireball somewhere on Earth, and then…

Nothing. Cut to credits.

Who put their name to this rubbish or signed off on it?

Ya know, if I hadn’t seen things like Mad Bull 34, The Humanoid and Garaga, I would be really, rreeallllly pissed right about now. But as it is, it’s a relief to be finished with this exercise. Almost merciful, I must say. For whatever reason, they didn’t bother to film an aftermath in a decade when OVAs fell over themselves to have aftermaths in their works. If it’s possible, this heap of rubbish has an equally bad manga version, which has far more nudity (!?!) and violence in it but a completely different storyline. It involves a Dimensional Joint or some such horsepoop but has a Masaki, Miku, and Zeorymer, which is all that's needed for an award-winning OVA series … right? As well as that, we get some well-earned sex scenes involving Yuratei and her favourite warrior, Taiha, who cannot speak of their love openly because she’s in charge, blah, blah, blah. Also, before you think me crass in stating that people gyrating over each other’s bodies is a point of excitement, let me share two facts with you. One, this is directed by Toshihiro Hirano, who’s done some ribald anime over the years (some of which we’ve covered before). In other words, he knows what he’s doing as a director … most of the time. Second, in a show with robots, sexy girls, planetary destruction, and more, the sex (and pillow talk) is the feckin’ high point of the show. Other shows can be a little stale in their setup but this is just plain boring and stupid. Who put their name to this rubbish or signed off on it? I mean who would…

Are you kidding me?!! The same bloke who wrote Guyver came up with this muck? Guyver isn’t Ibsen but, merciful hour, it isn’t this bad. There’s more dialogue in the original Guyver animation’s opening episode than in the entirety of this psycho-sexual robotic travelogue. 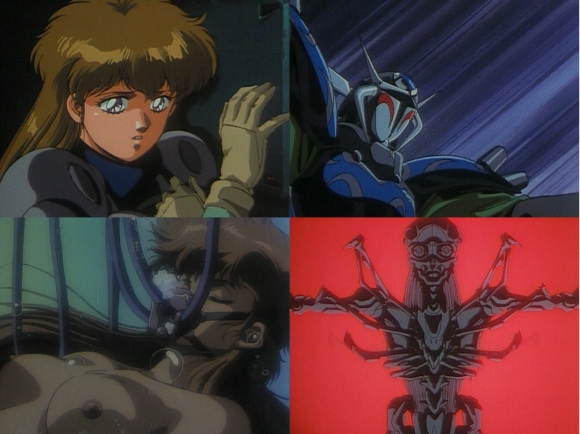 There’s more dialogue in the original Guyver animation’s opening episode than in the entirety of this psycho-sexual robotic travelogue.

The lead character spends the first five minutes screaming to be let out from prison, gets out, pilots a robot, gets taken over, swigs booze, molests an android girl, realises he shouldn’t help the Emperor hunt down the Jedi, makes up with his artificial girl, and saves the world by blowing himself up. The animation is quick and to the point but the whole thing takes place at night except for the last five minutes. (Hmm, there might be more to that.) None of the cast deserve life, except for maybe Oki and Miku, and she throws hers away at the end. The people below the action get wiped out, but I don’t care. Stuff gets blown up, but it’s more like trying to keep a drunk man’s attention half the time. This thing should be shown in the anime room of a con if only to provide cheap laughs to the doomed souls who happen to wander in. The dub is atrocious and should be considered a minor improvement on the whole. I really can’t believe I’m actually writing this review stating these things. It’s like I’m not here but observing. I first saw Zeorymer over ten years ago, back when Manga UK was still trying to push its bad catalog choices on us and before they saw sense and went with more modern choices. Not to say Naruto is much of an improvement, but, hey, at least it’s a living. The packaging even tries to make some slender link between this and Evangelion. Don’t. Stop. Don’t even go there. Nothing happens in this show that's even remotely like Eva. Liar, liar, pants on fire. 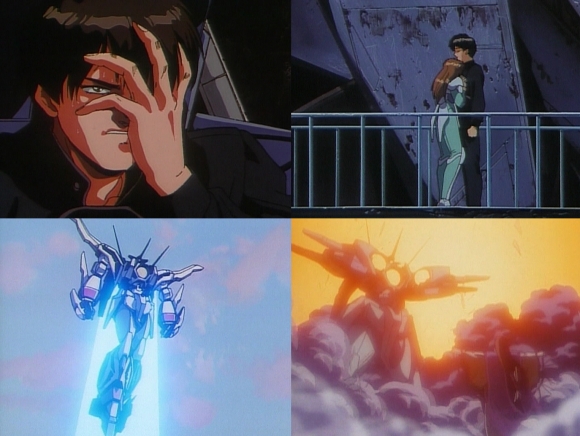 Next month, I try to counteract the bad by watching something equally bad. Lupin stuff should be here in time for the winter break. I know I said it would be summer but circumstances changed. Take it easy, my audience.