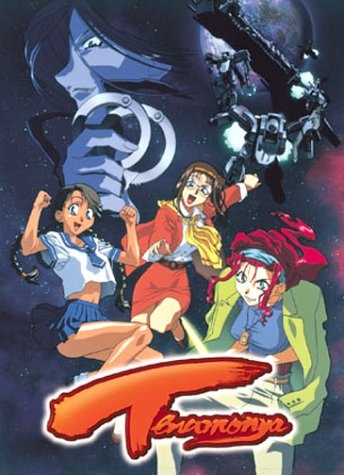 Working off the supposition that a nutty plotline is the basis for a good adventure, I like finding anime that has just enough wackiness to make me laugh but not so much that I’m left asking if there's some TV show or movie in Japan I should be watching in order to get the joke. If that’s true, then Tenamonya Voyagers has all the ingredients I’m looking for.

In the future, Earth stands on the edge of a galactic empire. Actually two in fact: the Central Democratic Planetary Federation and the Shinsei Greater Milky Way Empire. They have settled their differences and signed a few treaties. One byproduct of these treaties is that if a person inside either area is accused of a crime, they instantly are absolved of their crimes. Into this comes Ayako Hanabishi, a 20-something year old teacher, and Wakana Nanamiya, a sophomore high school student who is attending the same school in deep space, far from Earth, at which Ayako teaches. At least they would have been attending the same school if it hadn't closed after being declared bankrupt. Into their lives falls Paraila, a young girl who claims that she is a high schooler just like Wakana. Actually, she’s a member of the Jaoukai — a part of the Big 3 organisation (think space mafia and you’re not far off) — and she’s running to Earth because her rap sheet is a solar system long and the Space Federation Police is after her. So with no money, the girls pick up their stuff and decide to head to Earth. All the while, Space Police, former friends of Paraila, and others try and stop the girls from getting to their destination. 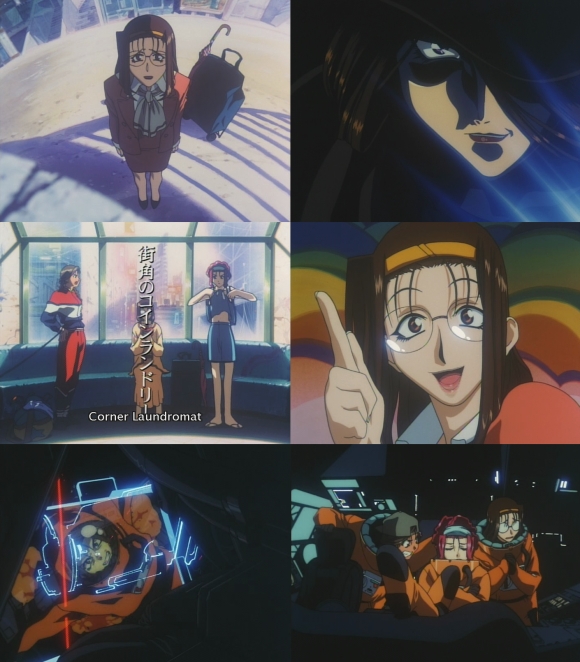 The jokes in Tenamonya Voyagers go by so fast that the actual joke is the fact that they went past at warp speed.

For me, the show is a godsend for making me laugh when I really shouldn’t. Japanese humor is very hard to get straight off, but Tenamonya plays from the same sheet as Magical Shopping Arcade Abenobashi, where the joke goes by so fast that the actual joke is the fact that it went past at warp speed. Lines are delivered super quick, Japanese texts are flashed on screen, gobbledygook is shown in odd places, things blow up frequently around the girls and Paraila, there are people shooting at them and screaming at them (usually it's Detective Yokoyama), and every crisis ends with a mech battle that racks up trillions of galactic credits in insurance claims. Paraila is a kleptomaniac who constantly steals ships, cruisers, space trains, and anything else that will get her one step closer to Earth. At first, the girls try and fight back and tell her its wrong. But when they discover her space crime history, they almost completely give up trying to correct her heinous acts. Oh, and an entire episode is devoted to them being naked except for a few strategically placed items on their body inside a boiling hot spaceship that will explode if they don’t play fantasy baseball with a star’s corona. There, I’ve blown your minds. You’re welcome. 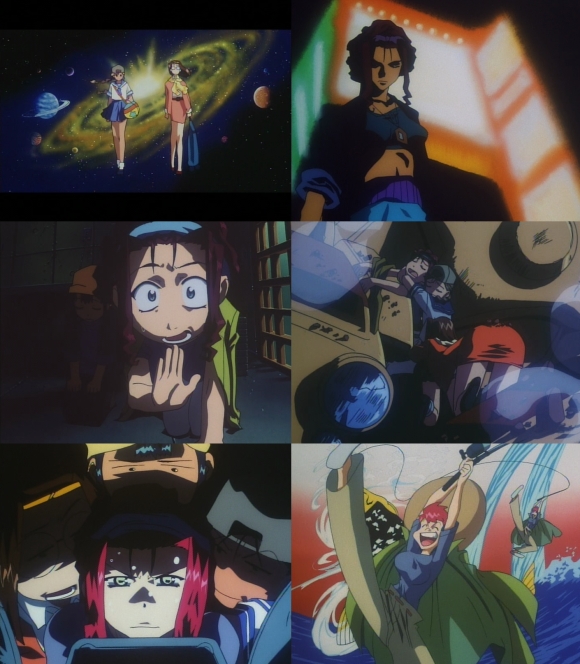 Throughout every adventure the girls face, they all try and do things in, if not an honest way, a way where the least amount of attention gets raised by them being there. Everything is going great until someone recognises Paraila, shooting occurs, and the gang have to run. Then Inspector Yokoyama bursts in and destroys the local countryside (and I’m not exaggerating here) and the whole thing starts all over again. Really, for only four episodes, the show’s creators really get their money's worth. 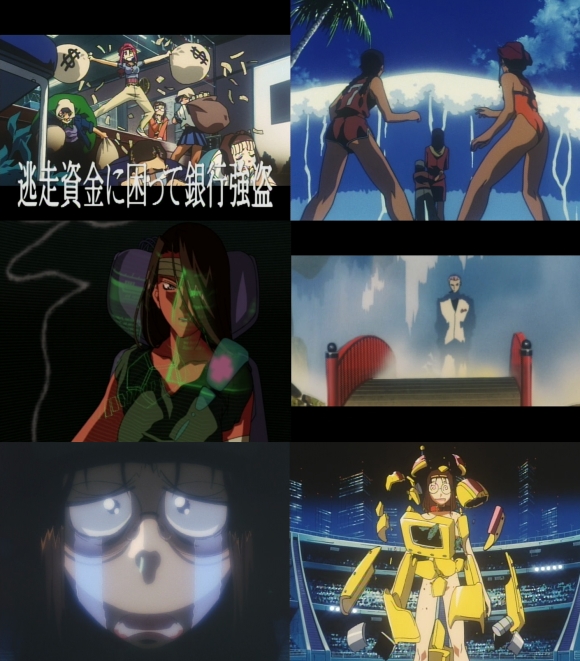 There’s a wonderful, gleeful, anarchic humor to the script.

The show doesn’t explain why we start the story almost in mid-flow; it just asks that we accept it. Paraila falls from the sky and destroys the calm that Ayako and Wakana were standing in (if only because they had been left without a paddle by their school closing). There’s a wonderful, gleeful, anarchic humor to the script. The three leads just punch out line after line, with Ayako mumbling her lines in a shy, squeamish manner while Wakana and Paraila go at each other. At first, Wakana is quiet too, but as she sees the danger Paraila puts them all in, she becomes more vocal. The final episode has the two of them pulling hair and pinching cheeks while screaming at each other. Along the way, the script writers drop title cards, stoic voice overs explains things like galactic politics, and characters who have no bearing on the plot (like space mafia goons) discuss how to deal with Paraila. The characters just go from one bad situation to the next with hopes that their position will improve. It never does, but then that’s the fun of it. They make good progress toward Earth but leave such a wake of destruction that it becomes moot if they ever reach human shores. 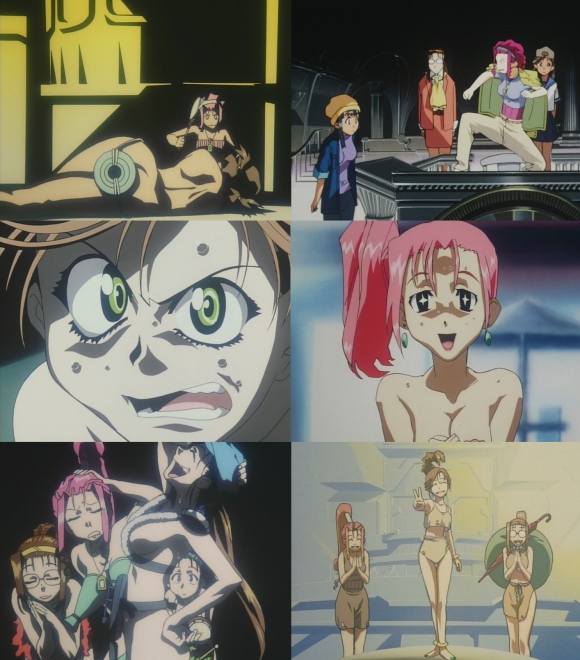 Little by little, the story of how Paraila came to fall from the sky and why she’s tagging along with the two Earth girls is revealed. She comes across as selfish most of the time but stays with the girls because they fulfill two basic roles. One, they serve as a magnet for trouble, like Detective Yokoyama (who should have been Sonny Chiba if they had made the character male), and Paraila LOVES trouble. Secondly, Paraila’s life would be boring without them. Ayako seems to not have a brain cell in her head, but she’s a college graduate and laments that her teacher training is going to waste on a daily basis. Couple that with the fact that she has an almost unconscious ability to win at gambling and she is the surprise of the cast. Wakana has her moments, mostly in the third and fourth episode when her baseball skills both fail and save the gang. She is a model student but Paraila just brings out the worst in her. And if you’ve ever been curious, the show gives a breakdown of all the charges filed against the girls (well, Paraila) at the end of each episode.

I would like to say that Tenamonya has a resolution but it doesn’t. It simply ends, and it does so almost in mid sentence. I found myself giggling when I realised they had no intention of letting us know if they made it to Earth. It’s a fun little adventure with some amazing gags and, yes, some absurdist humour, but it gets to temporarily leave the Trap Door if only for good behavior.