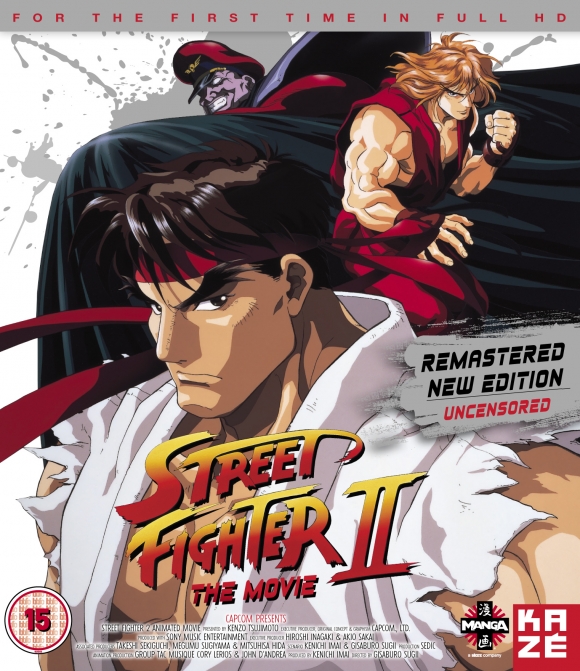 There is nothing finer in life than playing Street Fighter. It is the greatest fighting game of all time, in my opinion, and it’s also the one that made the most money (but don’t take my word for it). So in 1994, fresh from the success of their runaway hit, owners CAPCOM commissioned Group TAC and director Gisaburo Sugi to create an animated movie to introduce the franchise to anime fans (yeah, like they needed to be introduced). Full of pith and vinegar, this movie would define fighting genre anime for a decade, give new pup Manga Entertainment its first big hit before Ghost in the Shell, and to this day remain a beloved classic in the medium. It is simply: Street Fighter II. 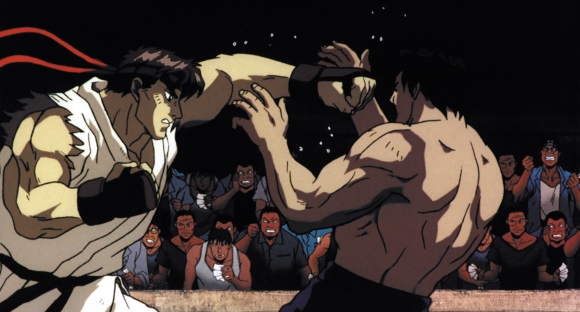 This movie exudes a confidence that is hard to replicate. Set in a post-cold war future, Interpol is determined to take out crime syndicate Shadowloo (Shadowlaw in some versions), which is led by Bison, an evil fighting genius who doesn’t seem to possess a neck ... or hips for that matter. Bison is trying to gather a cadre of fighting elites who either join him or get brainwashed into joining him. Interpol agent Chun Li knows the showdown between the two groups is coming and teams up with reluctant USAF Colonel Guile to take down Bison directly. In the meantime, childhood friends Ken Masters and Ryu are both wandering the globe, looking for challenges to bring purpose to their lives. They don’t know the two of them are on a collision course with Bison. Director Gisaburo Sugi hops from location to location with only some of the cast knowing why things are happening as they do. We are in Thailand, then in India or in the US, then Cambodia. Everyone chooses or is forced to choose a side. You’re either in Bison’s pocket or in his way. Along the way, the entire cast of the video games up until that point make appearances: cameos by T-Hawk and Cammy; speaking roles for DeeJay and Dhalsim; fighting via Fei Long, Balrog, and Vega; and full characters such as Guile, Chun Li, Ryu, Ken, Sagat, and Bison. But everyone is a badass. They can destroy masonry with a swift kick, cause total body trauma with a punch, or demolish goon squads in seconds. 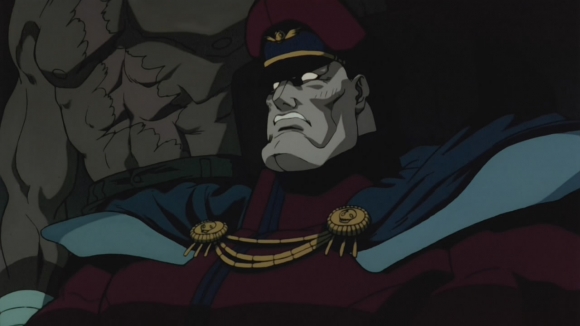 The clever thing about Sugi is that he doesn’t cram everyone into the first twenty minutes and then have to find excuses as to why they are turning up (live action Street Fighter, I’m looking at you). He has a core of characters that must make it to the end, and along the way, the rest come along as a matter of course in the plot. That’s not to say there are no problems. To this day, I can’t figure out why Interpol would a) conduct military operations in Southeast Asia or b) why they feel other law enforcement agencies around the world (and there are a couple of those) couldn’t bring them to justice. No-one mentions this, but still we get the Interpol Director General, or whatever the hell he is, nodding gravely or sagely as facts and murders are read out to him. The vibe here is that this is all window dressing until the inevitable battle, which is worth it when it does happen. 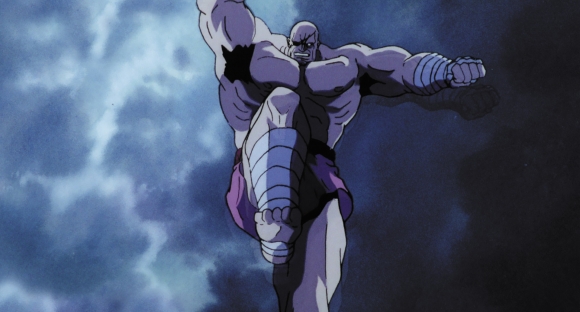 Sugi and his team work for their crust animating the action, with quick fighting moves and even quicker editing moves. The Ryu and Fei Long fight is one of my personal favorites, with Fei taking the best damn dub line ever for himself: “NO! We're not done yet! You haven't seen anything ... get ready!” As the two old friends, Ken and Ryu, get drawn together again, we see them finally square off against each other. For my money, I say Ryu went easy on Ken. Ken gets the best of the two lads' lines when he remembers what his old Sensei taught him: “Ken, what do you see beyond your fist?” “My fate.” The only other fight besides the final one (I’m not spoiling that if you haven’t seen it) that’s remarkable is Chun Li vs. Vega. I have never seen a character, especially a female one, take so much damage and come back to win so utterly against their opponent. She destroys Vega both psychologically and physically. You want her to wipe the psychotic smile off that pretty boy’s face, and she does so with panache and even delivers one of her signature game moves doing it. 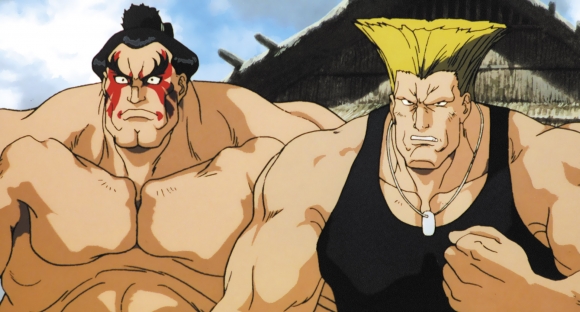 The Chun Li fight also allows me to bring up the subject of censorship against SFII. When it was first released in English-language territories, a brief scene of a nude Chun Li in the shower was edited out. Manga later restored this to some of the DVD releases and it found its way back to the Region B Kazé Blu-ray release. Growing up, I never knew it was missing. And when I finally got to see it, I wasn’t bowled over by it. Yeah, Li’s a healthy girl and all that, but the scene didn’t add anything or take away anything. If anything, it’s the bits that got left in with that scene that I found weird. Sugi uses a series of Brian De Palma-style camera passes over the things in Chun Li’s apartment and around the shower door as she’s in there. The use of the slasher movie voyeur perspective makes Vega into a scary character before he ever says anything. Also, one of Vega's lines during the fight that pushes him into space cadet territory was cut from the Kazé release; I'm sad to see it go. 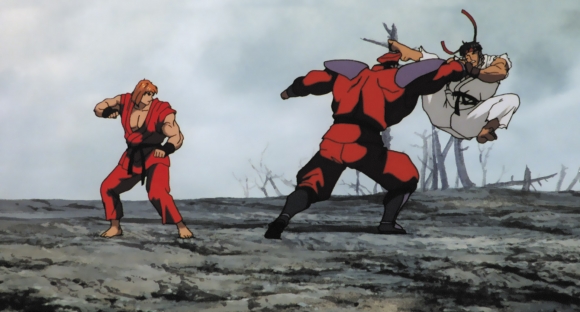 This movie would define fighting genre anime for a decade...and to this day remain a beloved classic in the medium.

In terms of editing, yes, if you’re a fan of the original dub, you will be disappointed; all bad language has been removed. But what a dub. This is an slightly old school dub where people tear into the lines instead of giving a tonally dead but accurate performance. It’s all about building. Guile, Bison, Ken, and Ryu start the film by talking evenly, but as the stakes get raised, they start shouting, screaming, or roaring into the mic. It helps that while this is going on, the action on-screen goes for Keystone Cops levels of destruction. There seems to be conflicting information as to the dub actors, but the best list for the dub that is featured on both the Manga DVD’s and the Kazé release is this one. For years we couldn’t listen to the Japanese language track for some reason, but with subsequent releases (including the latest one) this has been corrected. So it’s interesting listening to the Japanese cast playing it subdued and then listening to the US one where everyone goes nuts. 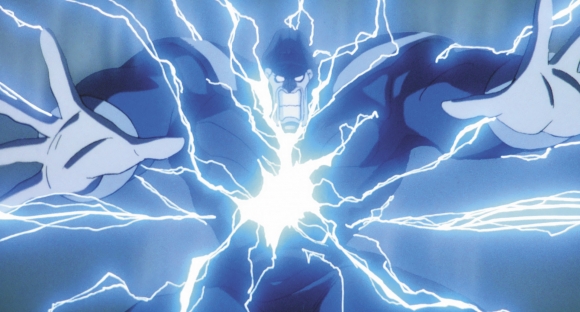 The film revels in it’s ability to do anything it wants and doesn’t have to explain why it’s doing it. The characters get fleshed out from the games in ways that shouldn’t surprise fans but will intrigue newcomers. (Yeah, right! Like there’s anyone left on the planet who doesn’t recognize the characters from Street Fighter.) The standout development is the relationship between Chun Li and Guile, which is both complicated in its tone and straightforward in its delivery. Yes, this movie gave rise to the somewhat straining OVAs and the Street Fighter V TV series, but none of those detract from their progenitor. The movie is an excellent companion to the Steven De Souza live-action movie, whose failing is that it tries to explain why all the characters are there in the movie without allowing them to have fun. I think this is why the animated SFII movie maintains the respect it does and why the live-action version has become a camp classic. I won’t and can’t hate the live-action version because I love it so. However, if you’ve seen both, then the animated movie is what you take to a desert island.

"Hello C
aptain. Are you ready to give me that heart transplant you mentioned?""Ready and waiting!"