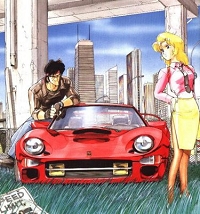 Kenichi Sonoda is crazy. Not Werner Herzog crazy, but that kind of low frequency insanity that results in dross or gold. After hanging around with Gainax and General Products, he made a name for himself on Bubblegum Crisis and Gall Force. So naturally AIC and the late Artmic threw a team, some money and total creative control (granted it was directed by Yasuo Hasegawa) to make anything, he created the craziest on-the-wire road race OVA's ever. Your guide to Sonoda's version of Chicago, is the mountain of a man, Bean Bandit, his spunky, gun-toting friend Rally Vincent, and an equal measure of cops and psychos out to get Bean in the 1989 OVA Riding Bean. 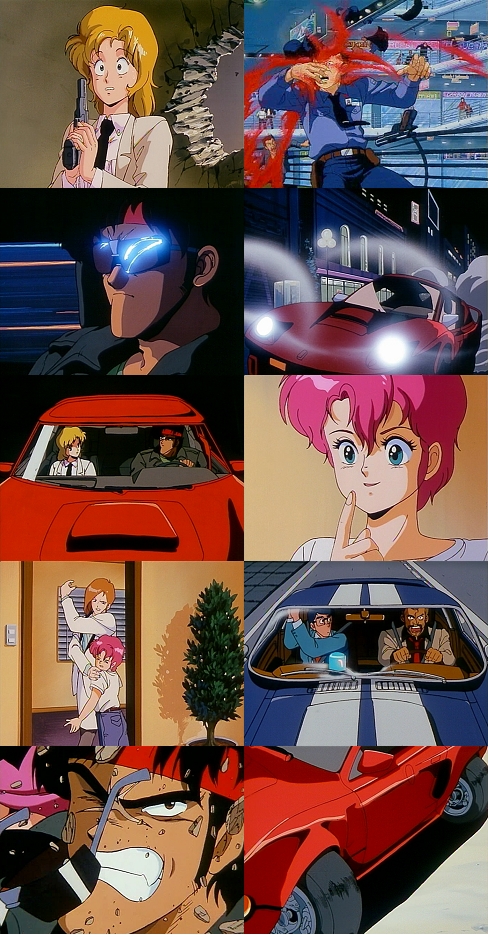 Equal parts comedy and seriousness, Riding Bean's ability to jump from point to point is as impressive as its title character's physique.

Riding Bean tells the story of Chicago, Illinois-based courier Bean Bandit. Bean will work for anyone, taking anything or anyone anywhere.

But Bean has two things the other couriers don’t: a flat $45,000 fee and a souped up car. So if you’re only travelling from Chicago to New York the fee is a bit steep, but if you’re robbing a bank then $45K and a super-fast getaway car are small prices to pay. So naturally the Chicago PD wants Bean in a big way. At the start of the story he has racked up an impressive 74 police cars, all totalled while trying to catch him. But his latest job has double crosses, criminals and armed henchmen out to get Bean. In any other context, having only 46 minutes to tell this story would cause it to fall flat on his face. But Sonoda runs his story and his characters at breakneck speed, giving us no time to form an opinion, good or bad. Why does Rally work with Bean? How come half the things in Bean’s hideout and his jacket are bulletproof? Where did Bean get his car kitted out like that? It doesn’t matter because asking will ruin the enjoyment of the film. Equal parts comedy and seriousness, the story’s ability to jump from point to point is as impressive as Bean’s physique. 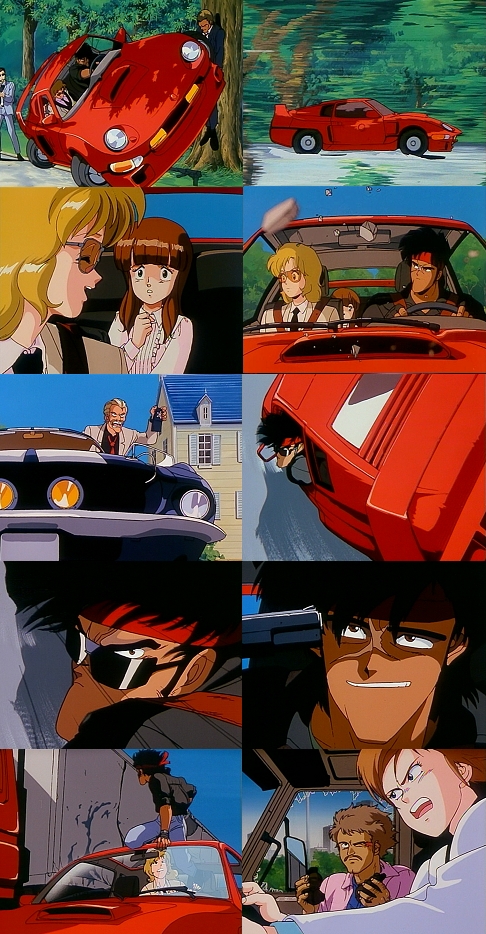 Speaking of Bean, his character design is different from any of Sonoda’s other work. His male characters are usually tall and well built but Bean is huge, with wide shoulders, an enormous jaw, and massive eyebrows. He literally couldn’t blend into a crowd if he tried. His voice actors in English and Japanese give him a gruffness and it helps when contrasting to Rally Vincent. Petite, blonde and totally serious about guns, this version of Rally seems to be in a professional, if not personal, relationship with Bean and the voice actors for Rally rather confusingly seem to interact with Bean like a nagging housewife (apologies to all house spouses for that generalization). Is that deliberate? No idea, but it adds a great layer to the film.

In keeping with the low-level craziness I talked about earlier, Sonoda decided to give Bean not one villain to fight, but two. Percy is an Inspector in the Chicago PD who somehow requisitions a Shelby GT-500 and soups it up some more. All on a police inspectors wage, I might add. Then after ranting about Bean wasting all those police cars, proceeds to demolish the city in pursuit of Bean. On the other hand, Semmerling, the main villain, is a female master of disguise whose main talent, other than extortion and murder, seems to be seducing pre-a pubescent girl into being her accomplice and lover. Yeah, Sonoda is crazy for another reason, if you’ve figured it out, in that he treats female characters who aren’t the main leads brutally. They’re either being shot at, murdered, ravaged (and I’m being kind there), or placed in a state of nudity or undress. Just so you know going in what the flavor of the creator here is. 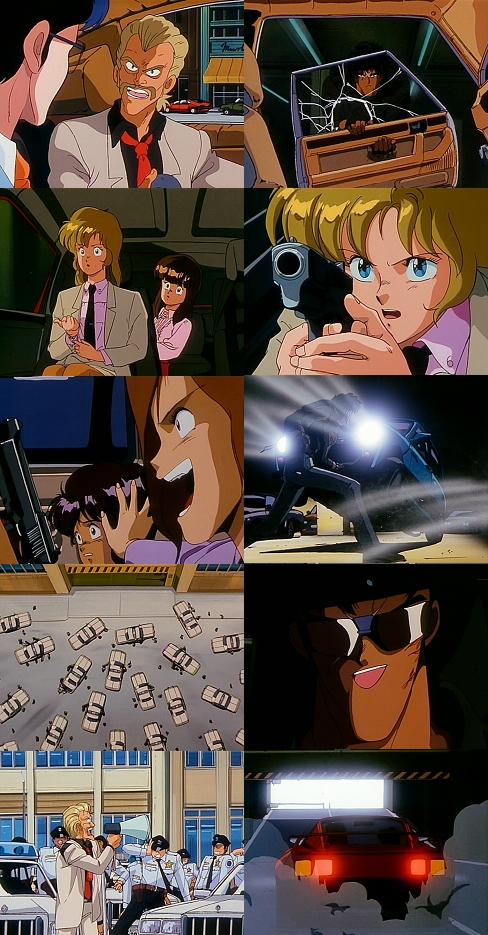 If people weren't dying, Riding Bean would be a Hal Needham chase flick with murder and guns.

Aside from that, the main reason people should watch this are the car chases. Cars are mangled, crushed or are made from explodium. Bean and Rally, plus a passenger, strap themselves in and hurdle around corners, under train line platforms, through checkpoints and around lorries as Bean tracks down the people who set him and Rally up with the cops. Cars, people, and roads (!) all get totalled as Inspector Percy tears after Bean tearing after Semmerling. If people weren't dying, Riding Bean would be a Hal Needham chase flick with murder and guns. I mean, Semmerling is actually crazy. She murders people she doesn’t like or doesn’t have a need for anymore, or just for kicks. She has an actually sexual relationship with a child. If I could find a crazier analogy, it would be Goldie from Gunsmith Cats, another Sonoda story.

Music in anime tends to be either cheap little ditties or big theatrical sweeping scores. Riding Bean is the first anime I’ve found that has a specialist score. Sonoda hired American musicians to create a jazzy, bluesy soundtrack and it helps to divorce you from the idea that this is a Japanese-made product. Though the Kenny-G style ballads at the end of the movie are kind of jarring. But I would have a hard time thinking what kind of film it WOULD suit. So it remains in Riding Bean, Sonoda’s statement on car chases, heroes and villains.

I like Riding Bean, more than it has any right to be liked. It’s got overblown action, an '80s lead and weird sexual undertones. If this were a movie or a full series, it wouldn’t work or be pleasant. But as a what-if case, it succeeds. So another title wins its case against the Trap Door.

Every month in "The Trap Door," Phillip O'Connor tackles one forgotten anime title to find out whether it deserves to be rediscovered by the anime community. Click here to check out previous posts in the column.