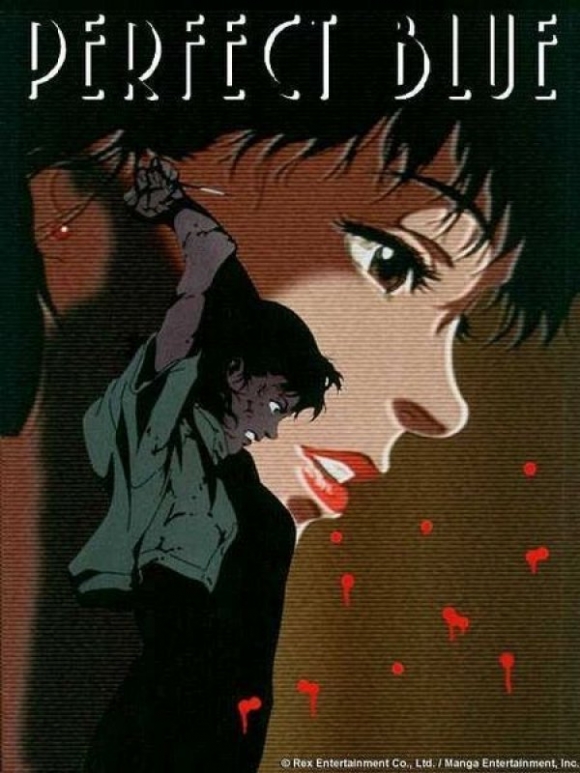 Let’s get something straight before we go any further. I’m not a person to make blanket assumptions about people’s opinions but on IMDB there are actually people who either don’t get the film we’re going to talk about or don’t like it. Whatever about not getting it, how can they not like one of the most sophisticated thrillers made in the last twenty years? A film that defies a straight explanation while pushing the boundaries of the animation medium? I’ll try and help you not become one of these people because we are finally going to talk about my favorite animated film ever: Perfect Blue.

The film is a terrific and terrifying look into the mind of madness.

Perfect Blue, the feature film debut of Satoshi Kon, came out of nowhere to take critics and audiences by surprise in the late '90s. Seemingly about the tragic story of Mima Kirigoe, the now former lead singer in the fictional all-girl J-Pop group CHAM!, the film is supposed to chart her descent into madness as she increasingly deals with the idea that she might have a split personality. All while dealing with a crazy stalker! But the film is so much more than that. I’ll summate what I think is the concept of the film near the end of the review. For now, I will tell you why I couldn’t consign this to the Trap Door if I tried. 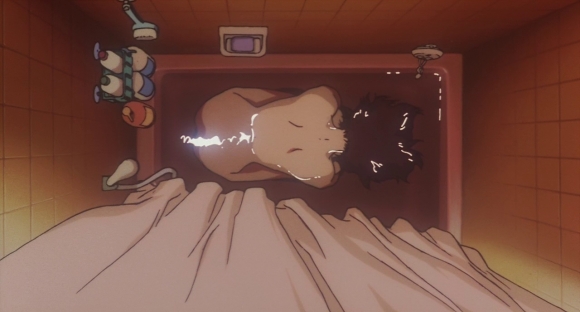 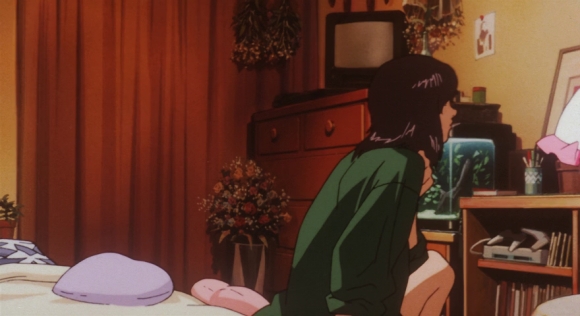 Mima is the best kind of lead character imaginable in that she transforms completely over the course of the film. She starts out very naïve, is sent to an emotional hell, destroyed in front of the public, and then has to deal with a double threat in the form of two groups who are obsessed with her. All the while, Kon uses techniques like double takes, replays, jump cuts and false starts to confuse and obfuscate your (and by extension Mima's) concept of time, narrative flow and reality. Pretty soon after she strikes out on her own, Mima learns of the existence of Mima’s Room, an online blog (and a proto-blog at that) that purports to be written by the (still) lead singer of CHAM! In other words, Mima herself. Mima could forget about it except it’s eerily correct. What she wears each day, where she goes, who she talks to, what she says to that person or persons, her innermost thoughts. Now, not only is she dealing with the pressure of starring in a sexually provocative video for her first starring role, but she starts to wonder if she is also writing this blog as well. Soon, however, she starts to doubt that even that is the truth. Is she still on stage with her band in the here and now or is she the character from Double Bind (the video she stars in) who thinks she’s a pop singer named Mima Kirigoe? Is she killing people in the Double Bind production because she’s really doing it or is she remembering through the construction of a fantasy her fictional character has created? 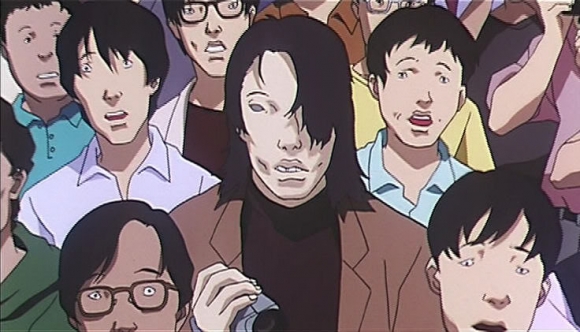 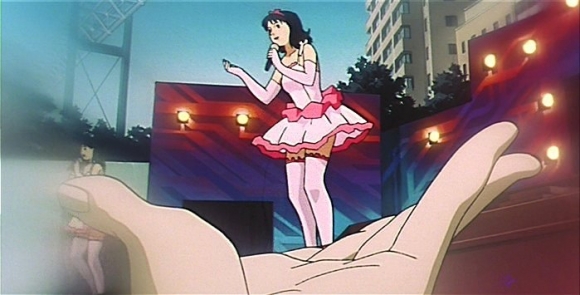 Kon works with a magician’s skill, if that magician were trained by Hitchcock. The question "Excuse me, who are you?" delivered in the film by one of the characters takes on multiple contextual meanings, all at once an innocent question and also a notion that you are being given a clue but not an explanation. All the time, Mima has these breathers where she simply thinks it’s all in her head and once the Double Bind gig is over, she can rest. However, the moment when Kon shatters this notion is when the “false” Mima actually turns up in the real world alongside another character with an unhealthy interest in Mima. This is the point of no return for the audience. Everything Kon has shown you up and until this moment has been a charade, designed to deflect from the real danger Mima is in. Plus even without that moment I described, the film asks a very scary question, one that I've been able to explain but was never able to describe it succinctly. It’s taken about ten years for me to articulate what the question was and hearing the tagline for the teaser for Paul Verhoeven’s Total Recall made the pieces fall into place. It’s rather long but it goes like this: 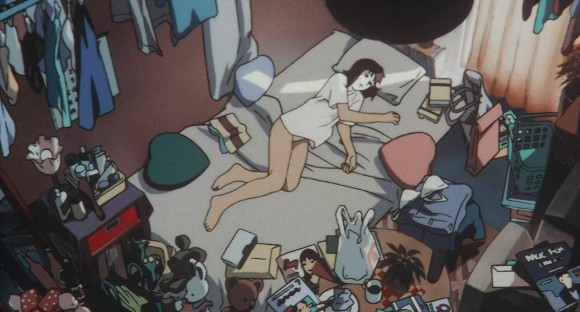 In essence, Mima’s mind and personality are being stolen from her but she doesn’t know it as she’s dealing with a psychosis building within her. When the final act starts, something has to give. The pressure that Mima, her imposter and her stalker have been under finally breaks and all hell breaks loose. But Kon then does something wonderful. He reminds us that the best laid plans are subject to the randomness of life. Just because you’ve gotten away with all sorts of things doesn’t mean anything in the final act of a film. Then Kon turns even that in its ear, but I’ve spoiled enough things. Suffice to say, Perfect Blue is a terrific and terrifying look into the mind of madness and is also a critique of pop culture, showing the way the industry uses and, by degrees of severity, abuses Mima. The industry fails to protect her or restrain itself as she destroys her "nice girl" image. They thank for a terrific day's work and we, as the audience, watch Mima crumple behind closed doors. There’s a creepy, almost voyeurist, view going on in the film in the way Kon takes the "Male Gaze" and subverts it into two separate functions: it functions as the "false" Mima's view when Mima is on her own and it works when Mima herself feels she's being observed by the world. It's not overt, but Kon subtly weaves it into the fabric of the story. We the audience are forced to go along with Kon as he makes us unwilling participants in this. Is he trying to get us to notice we’re consuming a film in the same way that CHAM!’s fans consume their music and material? It's an interesting idea and it does hold water when you realize that according to Kon’s narrative, if a fictional character can have an identity crisis, so can any of you. This reaches a crisis point about midway through the film in a sequence which on first glance seems like nothing but will be the trigger for something far worse than a stalker's blog or a hard day filming. 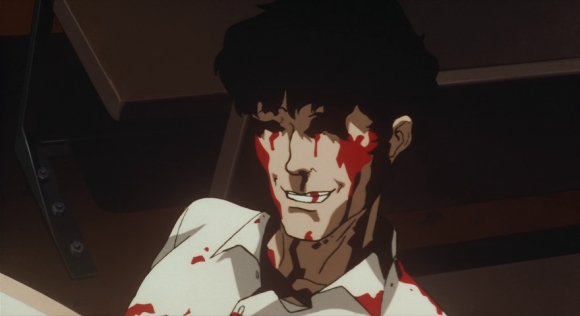 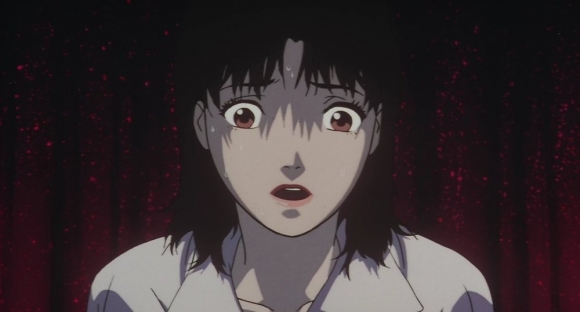 Now, the central concept I think that is on display, as I alluded to earlier, is this: Reality is nothing more than the conscious awareness of your surroundings and your position in them relative to their interaction with you. At any point, unless you have an anchor to give your reality weight (emotional connections, physical ephemera), there is nothing keeping you on the ground or stopping you from floating away. However, within the construct of a violent psychological episode, simply floating away could have devastating consequences for the person it’s happening to and the people around them. The film is the record of what happens when it occurs to a former pop singer from Japan. Perfect Blue succeeds in taking every assumption you can have about it and proving you wrong. All while building a stage and a set of characters that you’ve learned about from the inside out. Some of it is not pretty and some of it defiantly refuses to apologize.

Perfect Blue succeeds in taking every assumption you can have about it and proving you wrong.

I could never in a million years cast this film into the Trap Door as I hold it in the same league as any of Spielberg, Hitchcock or Truffaut’s works. I can still remember the night I watched this on TV on Channel 4. My only teaser of it was the nightclub scene that Mima films for Double Bind when Melvyn Bragg covered it for the UK TV programme, The Southbank Show. So shocked was I that a film could screw with my perceptions as to what was real and what was fiction, I had to see this film. The ending always has me rooted to the spot and I’ve seen it dozens of times. 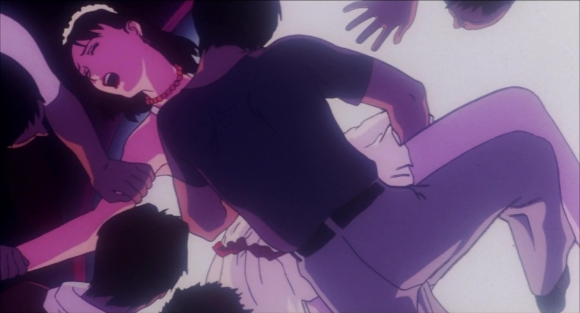 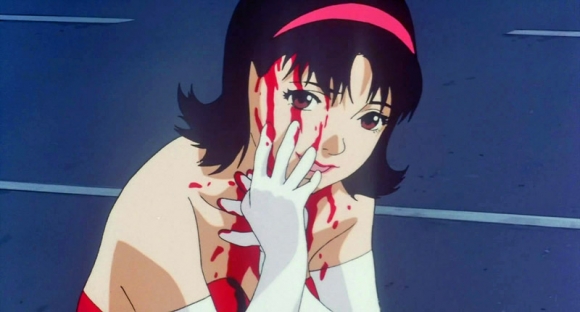 The film found its way to us in the mid-2000s from Manga Entertainment who deserve continued acclaim for taking a chance on this film. In that time, it’s been on TV in the UK and has been released on DVD multiple times. In the years since it’s release, Satoshi Kon released four other films and created a TV series. Sadly, as you may or may not be aware, he passed away in August 2010 while working on his fifth feature, The Dreaming Machine. The film is still incomplete as of 2013, and Masuo Murayama, a studio Madhouse colleague and friend of Kon’s, has taken it upon himself to complete his late friend’s final work.  But in regards to Perfect Blue, this year, it’s the turn of new Scottish startup label Anime Limited who are bringing it to Blu-ray for the first time. While I can’t speak to that release yet, it should be good and if it turns out to region free or if you have the ability to play Region B BD discs, you should really pick this up. Don’t listen to the philistines on IMDB. To paraphrase Heath Ledger from a film he once did: You deserve a better class of anime film and Satoshi Kon’s going to give it to you.