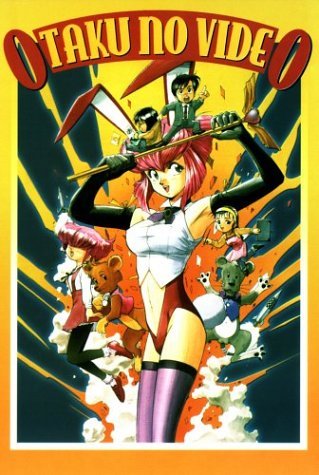 Ah, what would we do without Gainax? Well, for one, there would be fewer traumatized English fans of the studio *cough, ahem, Evangelion, cough* but we also wouldn’t have the studio's early trademark: an energetic, 100-mph pace of filmmaking. The folks at Gainax were always experimenting with what constituted anime, and one of those experiments was the hybrid anime/live action OVA Otaku No Video. It’s ... different.

Ken Kubo is a successful young man, he’s got a great girl who he loves, he plays tennis, and if he keeps this up he’ll have a good job, money, cars, and a happy home life. One day he comes across an old high school friend, Tanaka, who's now an otaku. No, that’s not fair, I should rephrase: Tanaka is an OTAKU. He’s got a circle of fellow otaku and though initially Kubo resists going back into his teenage pursuits, the lure of that sweet, sweet otaku life eventually seduces him back into the wicked ways of the pop culture hunter. Gone is his lovely girlfriend, Yoshiko, gone is his life of business. Now he dedicates his life to becoming the ultimate otaku, the OTAKING. Soon, he’s opening model shops, creating factories in China, and making lots of money, but he’s only interested in becoming a kind of Akihabara ÜberMensch. Along the way he encounters his old girlfriend, a new rival, and the destruction of his empire. Can he rise one more time to realize his destiny?

It’s best to warn you upfront: if you’re coming to this show with the above as your guide, oh boy do I have a bomb for you. Normally, this is where I tell you the show is terrible or it doesn’t pan out the way it’s set up, but in this case, that’s exactly what happens. Otaku No Video is the granddaddy of all subsequent otaku series: Genshiken, Welcome to the NHK, read Maniac Road, etc. When AnimEigo released this back in the day, people on this side of the world didn’t know what a Japanese otaku did for fun or recreation. This show gave us something of an insight. The characters are somewhat autobiographical, but I'll get to that in the second half of this review. On a more personal note, when we see Kubo and Tanaka become excited about figures or the show that they’re planning, I see myself in their enthusiasm. They like anime for the sake of liking anime. You can argue about their, er, tastes but they're certainly passionate. 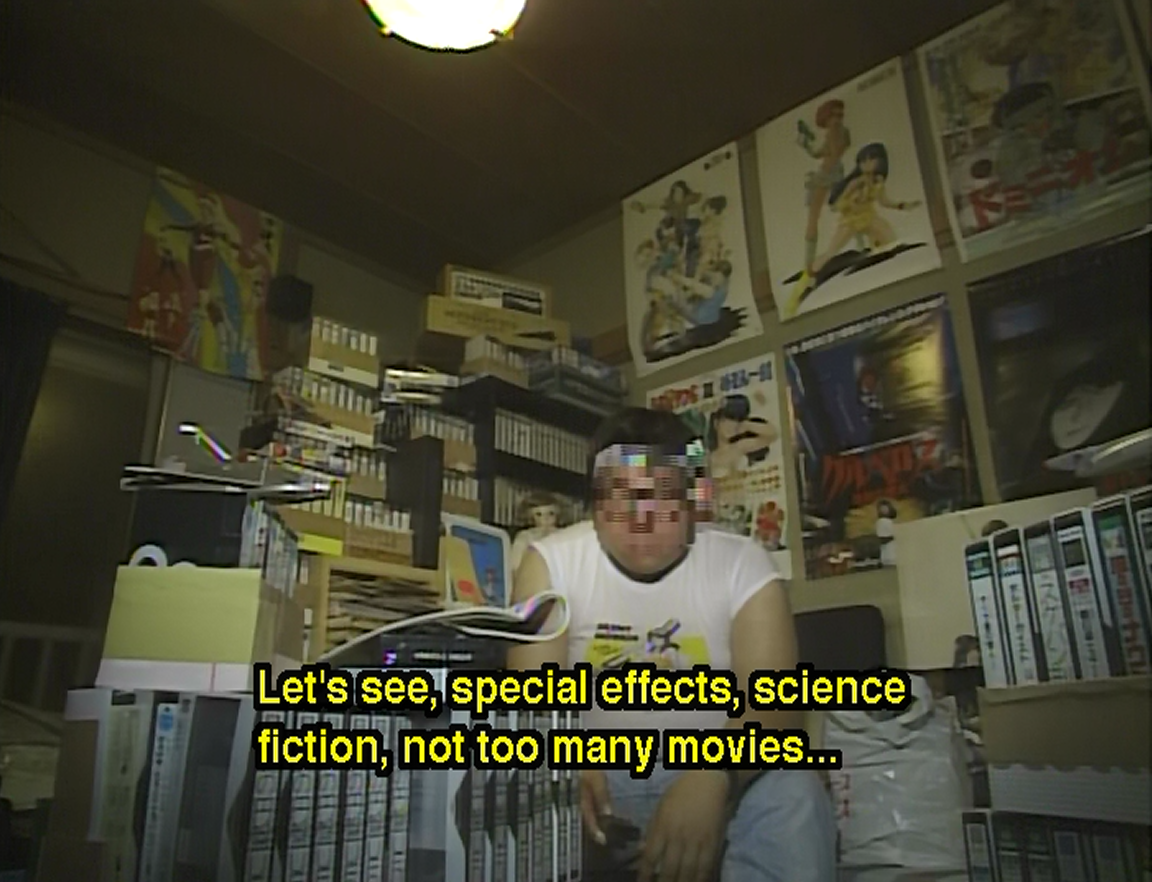 The second part of the show is where the real fun is. For no good reason except that Gainax could, the film has “interviews” with otaku types. All of them are typical nerd archetypes, all of them are live action interviews, all of them have their faces covered in mosaic, and if you haven’t figured it out yet, all of them are fake. The masterstroke of the OVA is that the interviewees are all Gainax employees or folks who hung out with the crew from the studio. They're also all are terrible human beings because they are the real-life versions of the shut-ins that we laughed at in the earlier animated segment. Now, when we see a guy who tapes TV programs for other people but can’t see a reason to watch the stuff he tapes (hm, the whole videotape thing is an explanation for younger readers in and of itself), it’s not funny anymore. I think that director Takeshi Mori did this deliberately to show that for all the joking in the animated bits (with references to Gundam, Macross, and Gatchaman), they are actually saying “Yeah, we know this is really a waste of your time, but you just bought this so who’s the bigger fool?” I can’t get across properly how embarrassing and funny it is to watch these segments as they convincingly stumble through their questions. It’s all so charmingly sloppy that it's hard to believe it was done by anyone professional. 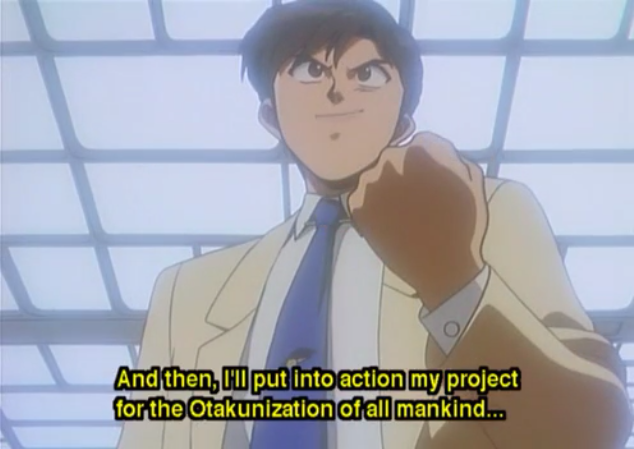 The show proper wraps up in a way that only Gainax can pull off. In an emotional moment (well, they are crying), Kubo and Tanaka reunite in a post-apocalyptic Japan where their friends have put together a super robot for them to escape the Earth. Really, I’m not making that one up. In any case, on display throughout is Gainax’s animation style from their early days. By which I mean, they were out to beat everyone else at their game. It’s too niche for me to recommend to everyone but it gets to stretch its legs outside of the Trap Door with manly tears, watching its favourite maid show and wearing its Char uniform with pride.

I have wanted to do Otaku No Video for the last two years but for whatever reason, never got around to it. I hope you go out and find the AnimEigo DVD’s as they have wonderful liner notes to go with their release. 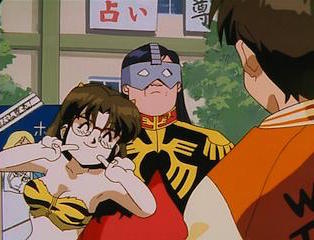