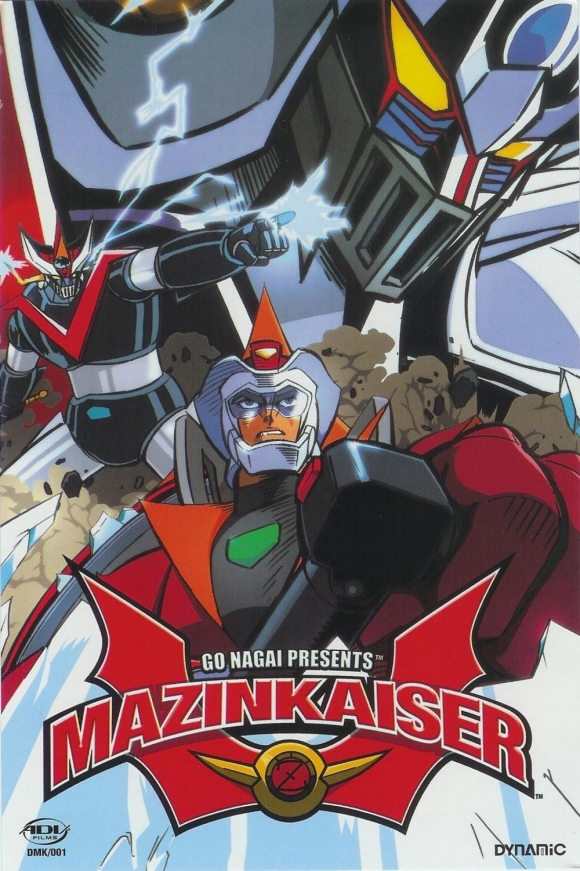 If you’ve never heard of Go Nagai, please answer the following questions. Do you like gratuitous nudity, violence, human blood, robot blood, bad behavior, and robots punching the sh*t out of each other? Would you like to see where Gulliermo del Toro got some of his ideas for Pacific Rim? If you don’t, this isn’t your type of review. If it is, welcome and sit down. This is Mazinkaizer.

The brainchild of all-’round manchild and smut peddler Go Nagai, Mazinkaizer tells the story of Kouji Kabuto and his robot, Mazinger Z: a robot built by Kouji’s grandfather in an attempt to stop his old friend turned enemy, Dr. Hell. The good Doctor found an army of mechanical beasts on a Grecian island during an expedition there and decides to use them to rule the world. Before he disappeared, Professor Kabuto entrusted the robot to his grandson and to his son’s assistant, Dr. Yumi. Working out of Dr. Yumi’s Photon Labs, Kouji fights Hell and his lieutenant Baron Ashura (a bizarre half man/half woman) as Hell throws every robot and the kitchen sink to defeat the young man and his friends. 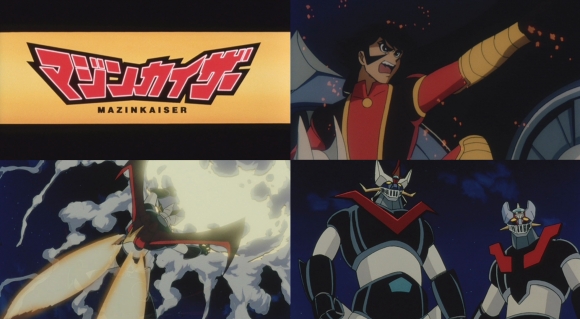 [In Mazinkaizer] more is less and excess is more.
Using the original manga as its inspiration rather than Toei’s Mazinger anime, this OVA series has the benefit of having references to the show without being tied to its continuity. In other cases, this would confuse the hell out of people, but here, much like the works of Leiji Matsumoto, you don’t need to know about the show beforehand to enjoy it. While I could bore you with the details of each episode, I’d rather talk about the notions going on behind the show. Go Nagai is a man who thrived and still thrives on being outside the mainstream narrative. He’s done manga and anime that has led to him being described as a nuisance and an enemy of society for his earlier work. From today’s standards, it’s pretty tame stuff, but he ignored protests and made the Japanese PTA the enemies in one of the manga they targeted. From there, he’s gone on to create all kinds of crazy stories, like Devilman, Violence Jack, Cutie Honey, and more. Watching an anime or reading the manga for these titles, you can be guaranteed that women will lose their clothes, blood will run like a river, young men will scream fighting words at enemies, villains will proclaim how the heroes will be defeated and women will lose their clothes. Yes, I said that twice; Nagai is nothing if not consistent in his delivery. With that kind of background, Mazinkaizer might seem like it’s following the tropes of anime with a hero losing his beloved robot only to find another, newer robot on steroids (which will then be used to destroy the enemy, who will in turn up the ante until the hero finds his “inner strength” and wipes the sh*t out of them) but it's more nutty and slick than that. 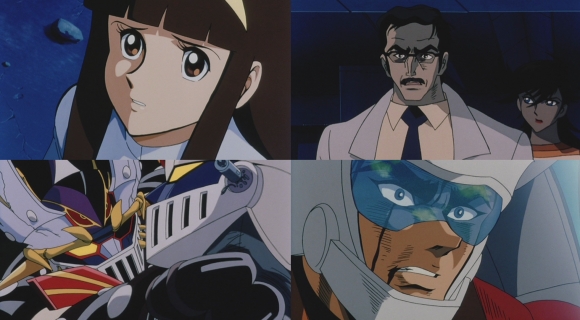 Nagai invented most of these tropes with Mazinger Z, so stop thinking it's only out to ape the aforementioned conventions. Mazinkaizer delights in showing its cast being put through the ringer, crucified and then being reborn anew with steely determination. If you were a young boy in the seventies and eighties, this would have been valium to you. Here, however, the idea is spectacle as Kouji struggles to control the Mazinkaizer, which is like getting low level electrical shocks as described by the pilot. Kouji gradually learns to control it, but doing so takes its toll on him; he loses his friend Tetsuya (and pilot of Great Mazinger) in the second episode from injuries he sustained, which he must go and heal from, and nearly loses his girlfriend, Sayaka, to Baron Ashura and Dr. Hell. As Dr. Hell starts to discover more fiendish machines to throw at the Photon Labs people, director Masahiko Murata throws everything at us: a hidden plot behind Dr. Hell’s power, the near total destruction of the Photon Labs, Kouji getting his robot replaced then upgraded plus the beach episode! Add to this Nagai and Murata's need to have the robots bleed when they're torn apart or fire pieces of their genitalia at their opponents and we're dealing with people who feel for maximum effect, more is less and excess is more. 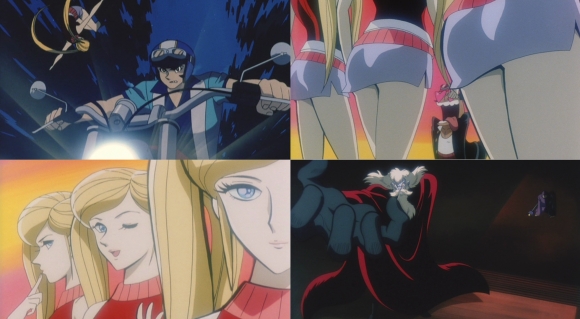 In-between robots punching each other, there are some episodes where trying to get what’s really going on is really hard. Episode Four is supposed to be the beach episode, but this is a Go Nagai inspired beach episode! Two of the lab assistants, Lori and Loru, decide to follow Sayaka and Kouji to the beach. I neglected to mention that Lori and Loru are blonde, buxom, statuesque, and interested in Kouji. So they are practically falling out of, ahem, swimsuits when they get to the beach. They then proceed to either tie Kouji in knots asking for the old “can you rub lotion on my back” trope or switch their attention to Kouji’s pre-pubescent brother Shiro. It’s an episode that will live long in the memory. We won’t talk about Sayaka losing her bikini top or the fact that the twins don’t acquire any tan at all. 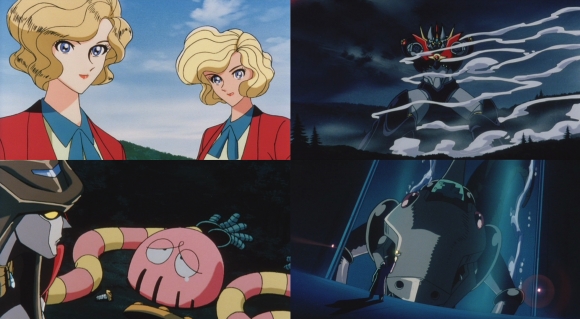 No Go Nagi show should ever leave the studio that made it without a JAM Project theme song and this one chose wisely with Fire Wars and Tornado as the opening and closing songs. I wasn't pushed about Tornado but Fire Wars just has Hironobu Kageyama doing what he does best which is growling into the mic and then singing. I can't find fault with this nor the overly dramatic music from Kazuo Nobuta which is the standard heroic and villainy in a can that this stuff usually gets. 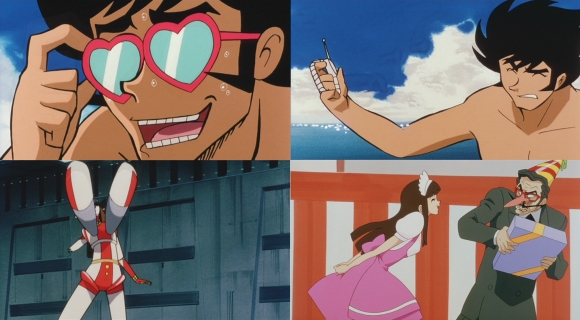 Ultimately, the series works as an all-action adventure with a side order of smut where the hero shouts, the girls are being pawed by males and then climb into their own robots and punch out villains, the villains are from the Victor Frankenstein school of genius, and the whole thing ends with Mazinkazier gaining wings and firebombing everything back to the stone age. Its rampant sexism and (rampant) dismissiveness of women will turn off most people, but stick with it and you’ll see Murata trying out a different approach with Sayaka and the other girls. I wouldn’t recommend you try other Nagai works and hope for the same thing; that just won’t work.

Ultimately, the series works as an all-action adventure with a side order of smut
Though Mazinkazier would come back again with Mazinkazier vs Great General of Darkness (2002), we wouldn't get it in English speaking territories. Which is a shame because from what I can garner, some of the cast buys it in noble and heroic ways and there is more shouting of attacks and looking into sunsets. Who can't get enough of that, I ask you? As it is, Mazinkazier happily fills a void in case you're curious and fills out a collection if you already bought Discotek's Mazinger collection. It launches with crotch missiles armed from the Trap Door as soon as possible.