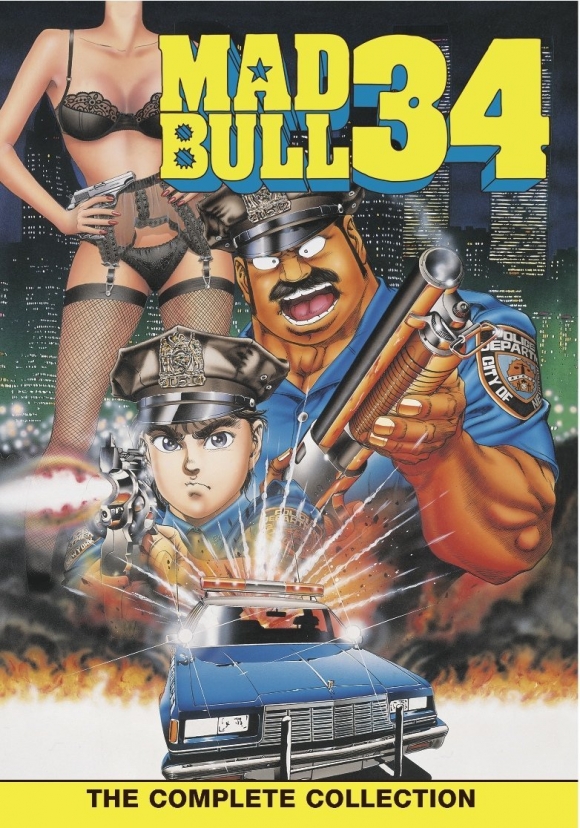 EDITOR'S NOTE: We're a little late with this week's Trap Door. Sorry for the delay!

I lived through the '80s, OK? New Wave hair, Gorbachev, MTV — all that jazz. But I didn’t live in the 1980s that Kazuo Koike lived through. In his world, the rogue cops that litter the cinema of the 1980s are not A line of defense, they are the LAST line of defense! The place is the mean streets of New York’s 34th Precinct, and your guide is John Estes — known as Sleepy to his friends and Mad Bull by his enemies!

I often think that Kazuo Koike doesn’t realize how amazing he is. For a man in his seventies, he has the ability to make even the craziest of ideas seem downright normal. Lone Wolf and Cub is essentially about a man and his young son touring Japan and hacking people to pieces. Samurai Executioner is about the fallout from political maneuvering and people get hacked to pieces. Yet at no point do I sit back and say, “This is insane.” It’s one of those titles, I guess. Anyway, Koike apparently sat in on some ride alongs during his research in New York. I want to know how he managed to do that, as the only New York I know of that would be similar to the way the city is depicted here is John Carpenter’s version from Escape From New York. The number of things he gets so wrong about how NYC was back then, plus the massive assumptions he makes about the people who live there... Apparently all of you in New York are sex-obessed, drug-dealing, alcohol-addled, rapist-murderers.

There’s no real point to describing the plot, because even watching the opening five minutes is so funny. Daizaburo “Eddie” Ban has just been assigned to the toughest precinct in New York and, as dumb chance would have it, is assigned to the craziest cop in the department: John Estes, the eponymous title character. Of course, Mad Bull’s reputation proceeds him, and Daizaburo finds out within, oh ... I dunno, five minutes why Estes gets that nickname. Two street punks (in hockey masks and roller blades no less!) get mown down, and by mown, I mean Sleepy shoots them at nearly point blank-range. Through the head. With a shotgun. Yeah.

After that, the show plays out over a series of four OVAs, each more crazy than the last, from subway car fights with a ‘roid angry version of Barry White to a showdown in a New York mansion like the one the Avengers have involving a M202 FLASH, a tank, an evil mafia version of Charles Xavier and his henchcrew, and the NYPD. Everytime you think “Well, that was crazy, but it can’t get crazier than this!” the show just says feck it and throws you another outlandish idea. I mean, who the hell lets loose on the streets a cop who thinks gunning down punks who fire back is A-OK? What about the sheer number of bodies Daizaburo and Sleepy drop in the “line of duty”? The show seems to revel in the idea that John is probably going to shoot someone, Daizaburo will probably scold (scold?!!) him for whacking them, and the chief will just smile with his five o’clock shadow and declare that boys will be boys. Plus, John runs a VD clinic and prostitution ring on the side. While having copious amounts of sex with the girls he protects. I swear I couldn’t make this up if I tried. It’s like someone took 1980’ cinema, put it into a blender and animated the result. There is no oversight in action here, just the department standing by while they allow a man who (let’s face it) has REAL ISSUES carry a firearm and roam the streets.

Koike might not take all the blame for the next thing I'm going to talk about, but he sure as hell provided the ammunition. Satoshi Dezaki (brother of the late animation god Osamu Dezaki) directed this sociopathic Punch and Judy show, and he gets every chance to “show off,” which means the people are either completely law abiding or raving psychopaths who rape, shoot, destroy, murder, maim, or otherwise entrap the people of the city in a web of violence. Koike has a reputation of brutalising women in a way that might make even Yoshiaki Kawajiri (Ninja Scroll, Wicked City) wince. Girls are raped, groped, molested, have explosives set off in their face, or generally get treated like dirt. Plus, John is not that much better in how he treats them. Yes, he goes after people who try and hurt women in general, but he runs a pimp circle for Christ’s sake! There have to be better ways to help these girls, like ... I dunno, arresting the people who use their services? Given how gun-happy John is, I’d wager any complaints by the men would result in a gunshot to the face. Fellow detective Perrine Valley (I don’t know) is introduced as a smart and capable police officer who then spends the rest of the episode being molested or mistreated by her immediate corrupt superior. Also, a crime boss she stopped earlier in her career wants her dead. So naturally this means she has to be forcibly gang-raped by half a dozen men in front of him. Incidentally, the gang seems to be entirely made up of African-Americans. I can’t make this stuff up. And the women in the show don’t have any backbone since they are being written by the same writer as the male characters. One reporter deliberately lures a group of machine gun-packing rapists (yeah, read that last statement twice) into attacking her just so she and her crew can film them doing it. At some point, the assailants will start to rape her, but she seems A-OK with that so long as her crew gets the footage. Really?! No woman I know would be tickety-boo with doing something like that.

The disc I have for this has both language tracks but I really didn’t bother listening to the Japanese track except for translation purposes. The English track is the stuff of legend, with Allan Wenger as Mad Bull, Alan Marriott as Daizaburo, and a few other of Manga UK’s Cardiff studio alumni. Michael Bakewell is, again, directing the dub, and of course, nice polite conversation in the original has been replaced with a fast flowing river of obscenities and profanities. Allan Wenger just chews up his lines as the aforementioned John Estes, seemingly oblivious to the crudity of the character at times. Alan Marriott seems to have hung out with every person in Brooklyn to perfect his accent, and it is a miracle he can get a word in edgeways with all of the colorful language he’s asked to utter. For the most part, the cast do what they can with the dialogue, but after a while, they just give up and go with it.

Mad Bull 34 deserves to be watched, but not because it is not entertaining or fun or even educational. It is a product of Kazuo Koike’s mind and therefore shouldn’t be countenanced for its tone or skill. Instead, much like watching a video nasty, Mad Bull 34 is something to stare at — to be entranced by and reviled at the same time. I like its ability to turn me off and its utter insanity, but most other people might not be so inclined. I’m afraid to consign this to the Trap Door as I might get a shot to the face from the title character. Tread carefully with this one, folks. It’s available from Discotek now.