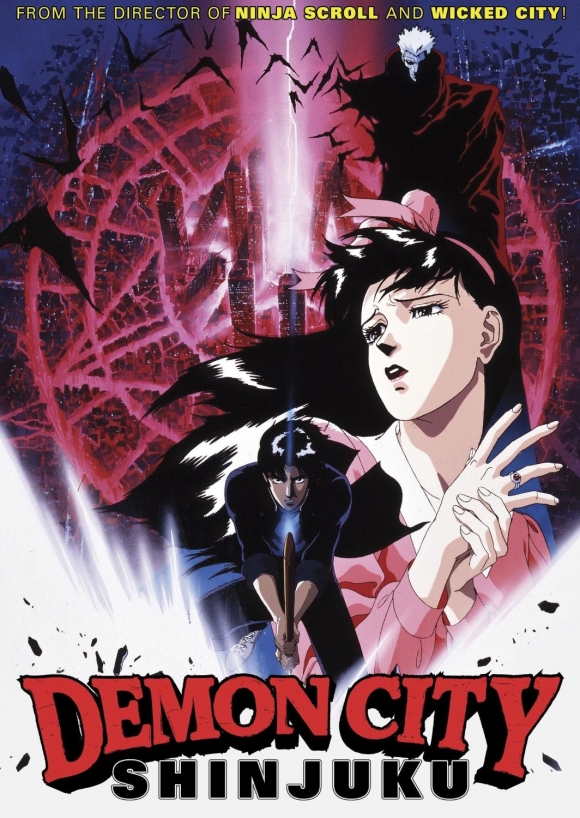 Last time I checked, Yoshiaki Kawajiri was king of the concept anime script. Cyber City Odeo (see my previous Trap Door) and Wicked City are prime examples of the story winning over the crazy scenario. I used to think that the title I’m writing about was actually Wicked City. Still I thought that Wicked City was separate to it, as if they were two films set in the same universe. Confused? I am too. Not only that but I’m kind of disappointed too. Here goes with Demon City Shinjuku.

Demon City is based on a novel by Hideyuki Kikuchi, who has worked with Kawajiri before and follows a line of demonic flavored novels and stories that are decidedly Japanese in origin. Western gothic horror tends toward the desolate and tragic worlds and stories of how only the pure of heart can confront and destroy evil. Japanese gothic horror tends to be more about the corruption of the body and the soul and the one to save us is usually one who has fallen from grace. At least, that’s what I have gathered from it. Demon City Shinjuku is no different. The Shinjuku area of Tokyo has been destroyed in a fight that saw the dark lord Rebi Ra kill his old classmate and fellow magic kung-fu practitioner Genichirou Izayoi in single combat. Genichirou fights the good fight but loses and the area is destroyed and cut off from the rest of Tokyo. Ten years later, world peace has come to the peoples of the globe. While visiting Japan, World President Kozumi Rama is attacked by a demon in the employ of Rebi Ra. All of this is a feint to distract Rebi’s old master Aguni Rai so that he can’t move against Rebi. What Rebi doesn’t know is that Genichirou has a son named Kyoya who also has similar, if slightly underdeveloped, skills as his father did. Kyoya initially doesn’t want to help Aguni but the President’s daughter Sayaka convinces him to help her confront Rebi Ra and destroy his evil once and for all. 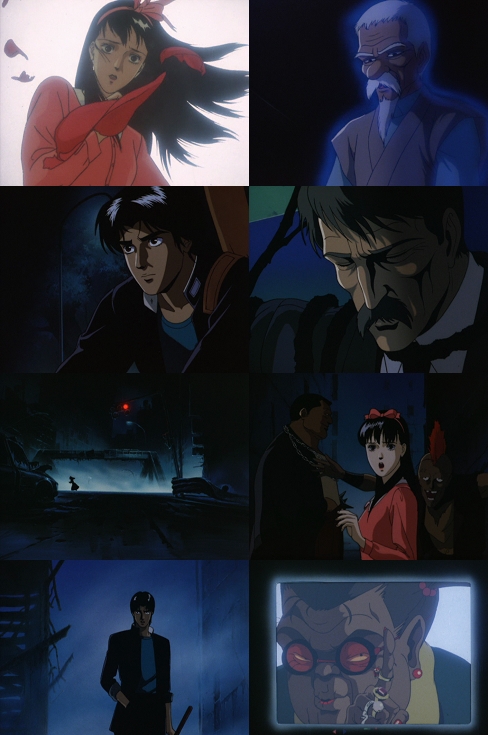 Now that might sound awesome and, truth be told, it is done with the kind of panache that Kawajiri is famous for. Lots of moody noir-style streets exist in Demon City Shinjuku and so too do the kinds of hard bitten men that only can exist in the minds of certain directors. There’s a kind of sleazy morally corrupt look to all of Kawajiri’s works in this era that harken back to the Hammer Horror playbook where the locations look normal in daylight but take on a kind of staged malevolence at night. Plus these places are almost always populated by grotesque characters who will always fit into two different categories: the first are human looking but will always have an ability to change into a horrible corruption of a person, and the second is nearly always a monster in the truest sense of the word. Plus having a reluctant hero (Kyoya) and a pure-of-heart princess (Sayaka) travel through what was once a thriving part of Tokyo makes them interesting strangers in a strange land. They travel through and at times are more in danger from the latent supernatural elements at play in the area than anything that Rebi throws at them. Along the way, they come across Mephisto, a mysterious man who lives in Shinjuku and doesn’t fear the darkness though he doesn't work for or with Rebi Ra. Mephisto seems to neither want to help nor hinder the duo’s quest but he does help them out. Mephisto is voiced by Yuusaku Yara in the Japanese track and he plays a badass so well.

But there is a glaring problem with the OVA and it’s something that I thought could never happen in a Kawajiri project: it’s not all that exciting. Once the initial fight with Rebi and Genichirou is over, we get lots of dialogue and then Kyoya starts his journey with Sayaka. There won’t be another fight until twenty minutes later and mind you, this is an 80-minute show. It’s like the story has nothing to say unless the characters are being imperiled and therefore driving the narrative along. Even when the story does wonders with having the characters dive into puddles of water trying to defeat a water demon or when Mephisto has a fight with a sexy, acid spitting demon in a pool bar, it’s a waste.

But in the end, you just watched an awesome fight at the end of a fairly so-so story

It feels like there are two stories going on: the end times being orchestrated by Rebi Ra and the fallout in Shinjuku as that happens, and this walkabout the two young lead characters are on, and occasionally, the two stories cross paths. The final fight between Rebi Ra and Kyoya is awesome, but it turns out to just be an awesome fight at the end of a fairly so-so story. Which is really sad because the backstories of the main characters really are amazing. Rebi Ra comes across as a bit of a psycho but the voice acting performance makes him seem more tragic than anything else. While Mephisto has a dark past, he seems more like a witness to events than a participant. Kyoya is a bit of a sexist pig on the surface, but deep down he protects, advises and looks out for Sayaka and she does the same for him. They have a nice scene in a hotel where the expectation might be that they sleep together but Kyoya sleeps on a chair while Sayaka has a the bed. Their interactions are nice, sweet and sincere. So, I can’t help but feel that I didn’t get my money’s worth from this and have to wait for Discotek to try and licence Wicked City, which does the whole "apocalypse while the human and demon world collide" much better, and gives newcomers a better look at what Kikuchi and Kawajiri could accomplish together. 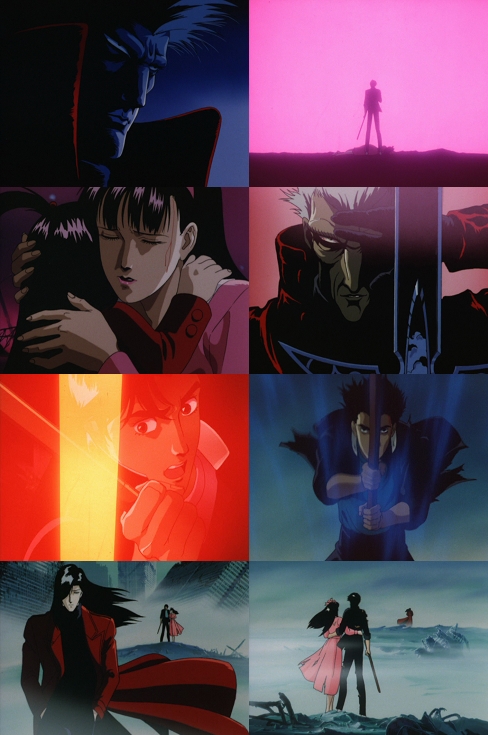 As a standalone title, it doesn’t really work but as a curiosity, by all means have a look. This one’s headed for the Trap Door with a chance of time off for good behavior.

On or around the 25th of every month in "The Trap Door," Phillip O'Connor tackles one of his old anime DVDs to find out whether the title deserves to be rediscovered by the anime community. Click here to check out previous entries in the column.