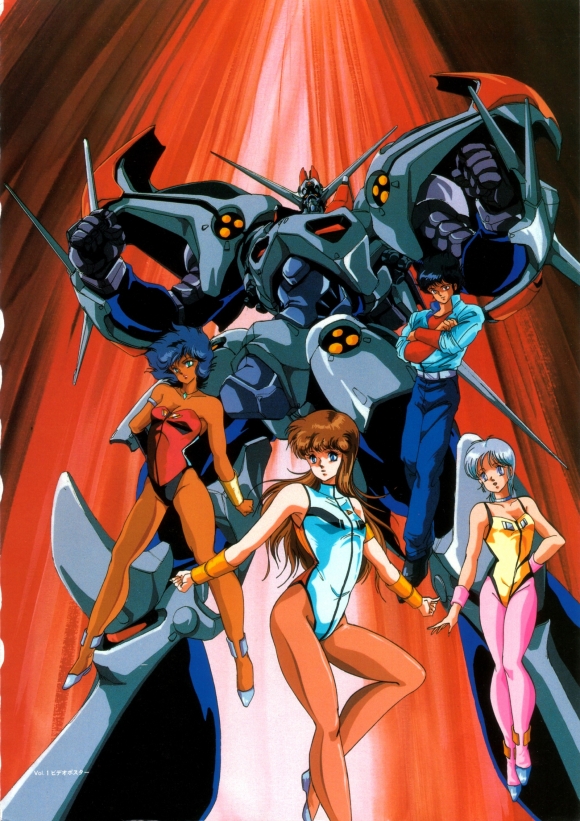 Oh, boy! I have been waiting to write about this series. If we lived in a world where anime was doled out one title at a time by the anime gods, then I would wait my turn and ask to be supplied with this. Combining mecha robots, psychically enhanced teenagers, monstrous alien bad guys, THIS, ladies and gentleman, is what anime is made of. This brainchild of Toshihiro Hirano (hey, you heard of him!) and Masami Obari, with mechanical designs by Shoji Kawamori, is the quintessential 80’s anime OVA. What the hell am I talking about? Why, Dangaioh, of course....

Working on the notion that you’ve never seen any of Hirano or Obari’s work (can’t think what would be so troubling about that), Hyper Combat Unit Dangaioh, or just Dangaioh for short, is a three-part OVA from Studio AIC from 1987-1989 in which four teenagers (Mia Alice, Rol Kran, Lamba Nom, and Pai Thunder) are kidnapped and have their memories wiped, given psychic abilities of various descriptions, and are trained to use a freaking enormous mecha robot called Dangaioh. Of course, this is an 80’s OVA, and these things are never that easy or smooth. Turns out the Dangaioh and it’s crew are a custom order for the Banker clan (or is it Bunker?), a group of evil space pirates who want to use the robot and the kids to destroy whatever the hell they choose to destroy. Then their leader, Captain Garimoth, will be able to rule the universe from beyond the grave (indeed!). The man the clan pay to do all this, Dr Tarsan, suddenly has a last-minute pang of conscience, freeing the kids from their brainwashing and escaping with them into deep space aboard his ship. Of course, Garimoth is none too pleased about services not being rendered and commissions Tarsan’s former henchman, Gil Berg, to go after Tarsan and the Dangaioh crew. 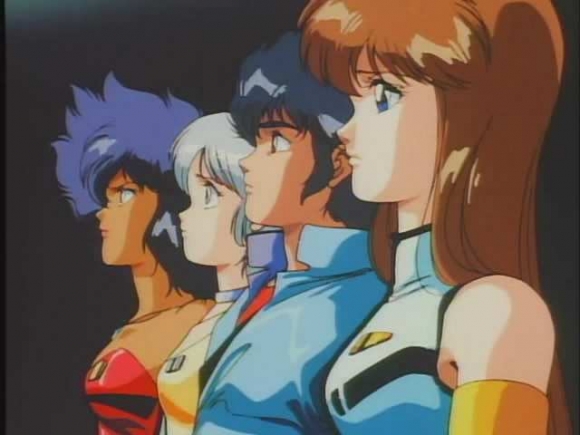 Now that we have settled in, the show itself is batpoop-insane levels of good with amazing animation done by Obari, among others, and art direction by some guy named Hideki Anno. When the Dangaiogh has to destroy something, it charges up its weapons and then goes to town on said target. And we get said destruction in wonderful 80’s glory. This level of attention to detail in fluid body mechanics and mecha action makes Dangaioh have a longevity that most other shows don’t have, not to mention that it’s a self-contained story with an ending (which I’ll talk about later) rather than another series or spinoff. (There was the spinoff Great Dangaioh, which Hirano created, but that doesn’t really count; the setting isn’t in space any more, and none of the original cast are in it.) The character designs are vintage anime 80’s fare, with skin-tight jumpsuits for everyone, billowing shirts for the lead hero, and an enormous hairstyle (beating Akemi Takeda’s notions about coiffure) for Pai Thunder. The villains sit in the shadows (as all good 80’s villains should do), and only Gil Berg is made mention of as some sort of one-eyed, new wave hair, evil Kiefer Sutherland. The Dangaioh is the ultimate in robot design, as you can clearly see it is designed with toy manufacturers in mind. All of it slots together to form a 80 foot tall steel badass who may have to take you down but will never let you down.

Story-wise, we get three episodes of the kids trying to regain their memories while on the run from the clan and Gil Berg. I think the best episode for that is the second, where they deal with Lamba Nom’s past as a princess and how the best of friends can become bitter enemies. We do learn about the other kids, but Lamba gets the bulk of episode two to herself. Interesting how Tarsan just seemed to rescue people from a bad situation right before they realized how bad things were for themselves. All of this goes on while the team combines into Dangaioh, shout attack moves, and cause their enemies' body parts to become seperated from another set of body parts. Also, we learn about just what a complete tool Dr. Tarsan is. I mean, he just comes along and kidnaps these teeangers, blanks them, is about to hand them over to Mr. I Hate Happy Thoughts, and then, THEN decides “Yeah, guys. I’m not so sure I wanna help you TP the galaxy’s trees.” Luckily, the team comes together for the final episode, and it’s all-out war. That brings me to the point I made earlier: the ending of Dangaioh is kind of unintentionally final. SPOILERS AFTER THIS!!!

The ending has the whole team stopping Gil Berg but at the cost of the ship, Dr. Tarsan, and the Dangaioh itself. We are left to wonder what happened to them, as for whatever reason the series didn’t continue (a tragedy seeing as the series had to potential to go places). Ironically enough, the same thing will happen to Hirano on Great Dangaioh, making him lament that nothing with the title Dangaioh ever gets finished. Whatever the reason, I have always wanted to see what happened to the team: did they survive? Did Garimoth or Gil Berg come back to finish the job?

The music on Dangaioh is excellent, with the main theme “Cross Fight” by Horie Mitsuko and Ichiro Mizuki being so 80’s-tastic you’ll be singing it for weeks. Also, the main music by Michiaki Watanabe (Fight! Iczer 1!, Mazinger Z and Great Mazinger) is suitably synth and menacing, and it’s a great wrap up for the whole shebang. The dubbing and localization of Dangaioh is both legendary and infamous. First up at the plate was U.S. Renditions, and their take was OK with Michael Bakewell back as ADR director and a great cast. Subtitling took a knock for the first episode, but luckily we had Toshifumi Yoshida and Trish Ledoux on hand to smooth things over. Now, we get to Manga Entertainment and their decision to simply chop episode one out and just give it a five-minute recap at the start of episode two. To this day, I cannot figure out why the hell they did this. It couldn’t be for running time; there isn’t anything that the BBFC would have gone mental over, and it cripples the show right out of the gate. I had to wait ten years to get my hands on the subtitled version to find out why the Dangaioh team all act as they do toward Tarsan and get some of Gil Berg’s backstory. A shame, really. It would have made things more awesome if they had have done left episode one intact as it establishes a narrative and timeline that the show doesn't need to survive but wouldn't be hurt if it was kept in. Manga US released the edited version on DVD in 2003, and it’s a great place to start if you don’t feel like tracking L.A. Hero’s VHS copies down first. 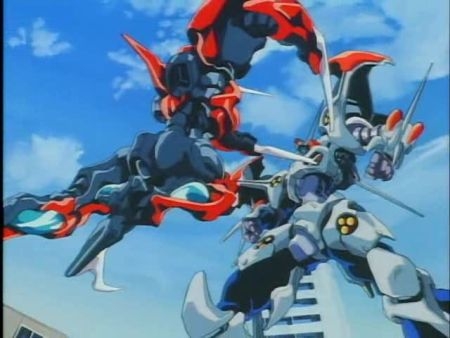 Dangaioh is a perfect gift for someone who likes sci-fi, 80’s cinema, or is getting into anime but doesn’t want to get into modern stuff. I can’t think of someone who would not like this. Though, as always, I’m willing to hear dissenting opinions.

I am taking a month hiatus from Trap Door as I now have more than ten titles backing up waiting to be reviewed for the column. I also want to get through some other stuff for Anigamers.com before settling back in June. So, I’ll come back with a double helping of TrapDoor for next time!