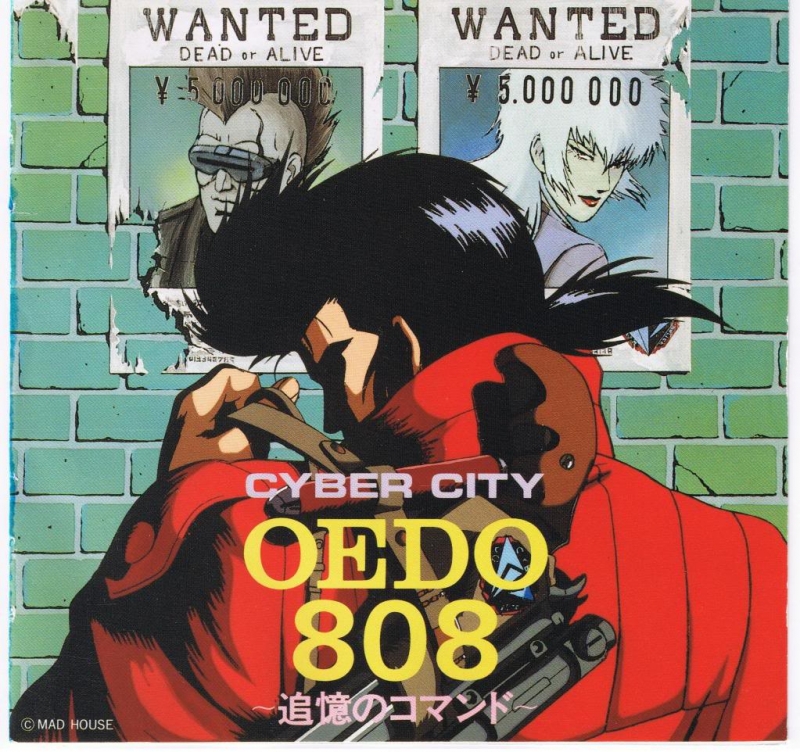 One day, hopefully, I would like to have my own family. The idea of having children doesn’t scare me, unlike other manults in my peer group. One day if I do have a family, I hope to tell my children (if they’re interested enough to listen, that is) about a god who actually walked the Earth in human form. A storyteller who came along at the right time during the '80s and '90s and, in a series of OVAs and films, changed how adults understood anime. I could have picked any of his works within the two decades mentioned and any of them would have been acceptable material. The man is Yoshiaki Kawajiri and and the title I chose is Studio Madhouse’s Cyber City Oedo 808.

It's a heady tale of a neo-noir city-state protected by vulgar angels.

In a fair and equitable world, the future will turn out like Star Trek. But seeing as how I’m an optimistic realist (for me, the shotgun is always half loaded), the future will look like Blade Runner. Or if we’re very lucky Oedo 808. The premise is simple: In 2808, cyber crime is out of control. Reasoning that to catch a thief, you hire a thief, the police decide to form a new bureau and recruit the very best cyber criminals currently languishing in space prison. Fitted with explosive neck collars, or dog collars as the Cyber-Police refer to them, they arrest, detain or otherwise neutralise other A-Class cyber criminals like themselves. Failure means the head of the officer in question goes through a permanent, painful separation from their body. Success means a bit is knocked off their astronomically high sentences. Clear it entirely and they’re free to go. Easier said than done, because Cyber Police chief Hasegawa gives them the worst jobs imaginable. Jobs that would kill people in most normal circumstances. But this is Kawajiri’s world and, in it, all his heroes are hard-boiled to death, possess super-human endurance or skills, and are the dictionary example of loners. Smart mouthed cynic Sengoku, veritable mountain of a man Gogol and metrosexual (before there were terms like metrosexual) Benten are all varied from each other, quick on their feet and lethal either as a team, or alone. This three-part OVA concentrates on one member of the team per episode and showcases them as they take on dead, vengeful programmers, insane military robots, and eternal youth experiments gone wrong. 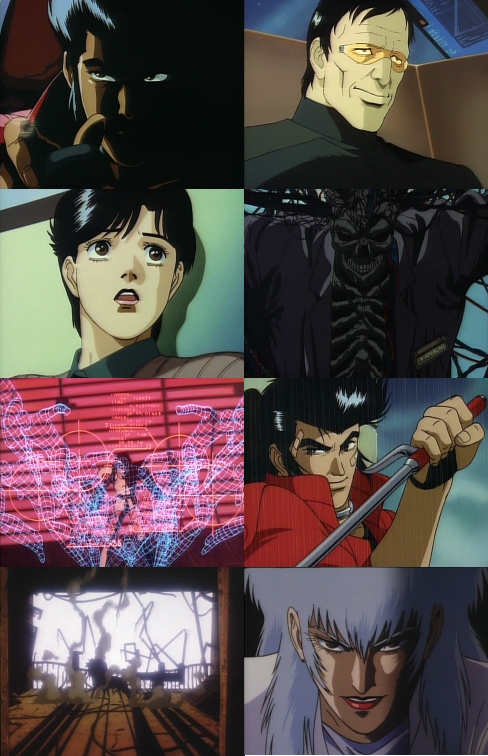 It’s the title in which I first memorised Kawajiri’s name and it burned into my brain the idea that cartoons could be badass. I understand that with such devotion, I’m in danger of rose-tinted glasses, but upon re-watching it, the title continues to impress me after all these years. It's a heady tale of a neo-noir city-state protected by vulgar angels. As a youngster and as a grown man, it fed into my nascent and burgeoning tastes for alternative sci-fi and action adventure. Even though Oedo is a major metropolis it is only two steps away from being Dystopia City. It foreshadows a lot of what the 2000s would bring: biotech, cybertech, internet proliferation, integrated networking and the rise of cyber-crime. There are tasty little morsels in the writing too with references to Tokyo’s past — Oedo is named after Tokyo's name in feudal Japan, Edo, and all three leads carry jutte, that short weapon that all Edo-era police detectives carried with them, albeit a more futuristic version. The show’s action quotient is amazing with hand-drawn (HAND-DRAWN!!) animation of high speed pursuits, gun fights and more. Plus the artwork lends a layered metropolis with grimey docks where shady deals happen, skyscrapers where true evil lurks and long sprawling freeways where low-slung cars with arc beams pierce the murky night air. Add to this a mixture of political intrigue, police procedural, and anti-heroes who are ultimately more honest than their law enforcement equivalents, and Oedo 808 starts to outlive the decade it was made in. 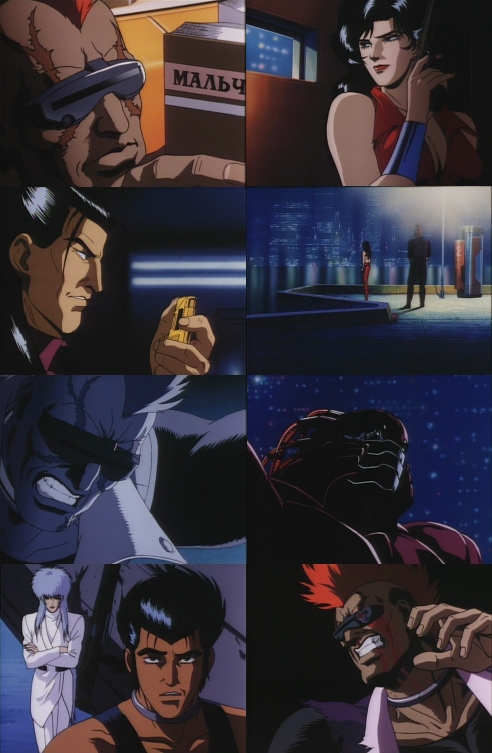 Sengoku is my favorite character as he’s arguably the most human. He’s pissed off that he’s stuck doing this job. He drinks to relieve the pressure of nearly getting killed every night. And he’s not a loud mouth, but he’s going to make everyone that crosses him pay with his tongue. Gogol is the most mellow but righteous, however he always came across as my uncle rather than someone I would want to emulate. Benten is the quietest and in the other’s spotlights comes across as tightly coiled but able to hold himself. Ultimately when given his own episode, though, he doesn’t seem to shine as much as the other two. As for the other main characters: Hasegawa is king of his world. He sends his people (cyber-police) into battle but doesn’t care if they live or die. He expects results, knows how to get them and to live with the results. On the other hand, he’s not upset when the three guys mouth off at him nor does he take it personally when things don’t always go his way. Police clerk Kyoko Jonouchi is pretty in a Kawajiri way and it’s clear she likes Sengoku. He likes her but understandably doesn’t want to get too close to her, since in his own words “you’re a cop, and I’m a con.” She’s nice and isn’t really mistreated by Kawajiri as he’s apt to do sometimes to his female characters (see, oh, anything else he’s done, really). 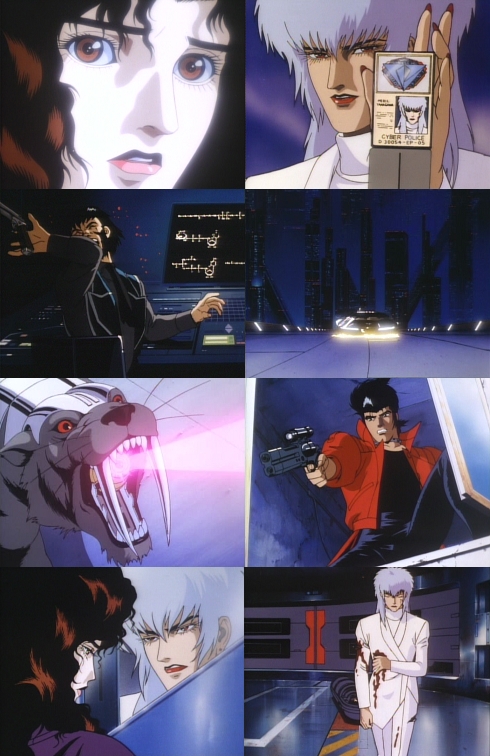 Cyber City Oedo 808 represents the best and worst reasons to show your friends and family your anime tastes.

The dub is the stuff of legend. Handled by Manga Entertainment from their dubbing studios in the UK, it is nice to own the DVD from CPM so I can flip between languages as I hear a perfectly normal conversation with some sniping in it change into an expletive laden bombing run by Michael Bakewell. It is stupendously amazing to watch and many's the time I've had friends over while we busted a gut laughing. Quite how Mr. Bakewell came up with some of his, er, unique interpretations is a matter of the ages. I personally don't want to know.

According to Kawajiri and Madhouse producer Masao Maruyama, Oedo 808 started off as a single film but somewhere along the line, it became a series of OVAs. If that’s true, the film format would have ruined the tone of the story. It’s got a pace to it that’s slow and methodical. If they had crammed it into a 90-minute film, it wouldn’t have the same freedom. Madhouse constantly take risks with their projects and Oedo is another such risk. Edgy, nasty and unrepentant, it represents the best and worst reasons to show your friends and family your anime tastes.

Every month in "The Trap Door," Phillip O'Connor tackles one forgotten anime title to find out whether it deserves to be rediscovered by the anime community. Click here to check out previous posts in the column.