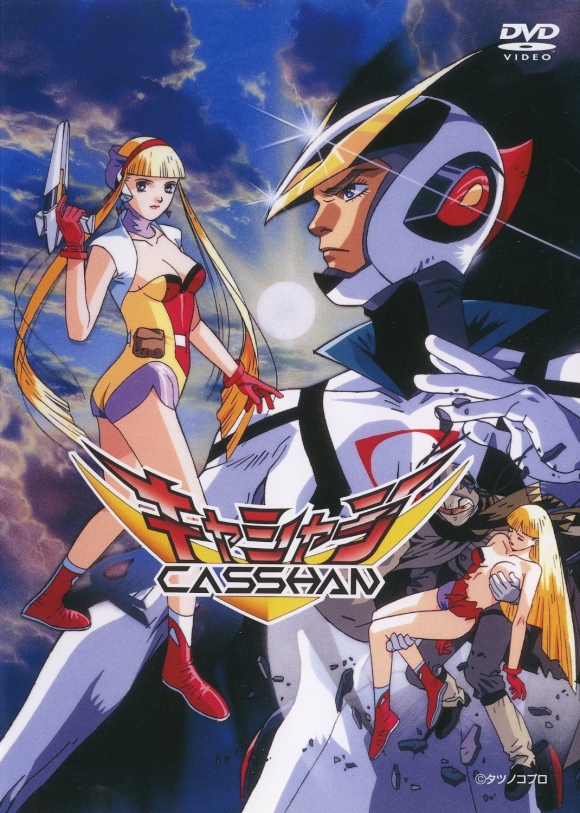 EDITOR'S NOTE — I know it's February, but this is actually the January Trap Door. Apologies for the late article! Phillip was extra-busy this month and Ink and Evan were hit with Otaku USA deadlines. We hope to be back on schedule for February.

Tatsunoko Productions is one of anime’s low-key success stories. Responsible for shows like Speed Racer, Yatterman, Gatchaman (Battle of the Planets and G-Force over in the US) the studio was founded by pioneer Tatsuo Yoshida in 1962. Most of their output in that decade and the next would find its way to US shores soon after. One title that made the jump is Casshan (pronounced Ca-sharn), the story of Tetsuya Azuma, a young man bonded with a robotic suit at the molecular level, who fights against the forces of BK 1 and his army of robot soldiers. Set in the post apocalypse, the original 35 episode show from 1973 spawned a 2008 animated reboot Casshern Sins and a live action reimagining. It also spawned the subject for the Trap Door this month: 1995's Casshan: Robot Hunter.

Casshan tries to protect the species he came from and the people he left behind.

I’ve always liked Frankenstein-style stories. From antiquity’s Faust to Disney’s Hercules, there are always people looking to skip the queue in life and get more out of it. But there’s a price to pay in the end; sometimes it’s a moral lesson, sometimes it’s worse. For Tetsuya Azuma, the price he has paid is somehow a lot worse. His father created the robot BK1 to protect the environment from all threats, but being a machine and all, and it decided the most dire threat to the Earth was mankind and, rising an army of synthetics, promptly destroyed civilization. His father and mother were captured by BK1 and were presumed killed, so, in trying to save the world, Tetsuya bonded with a robot suit that he and his father had made to destroy BK1. To save humanity from a synthetic threat his father accidently caused, Tetsuya has become half synthetic himself and sacrifices his humanity. All while he tries to protect the species he came from and the people he left behind. To quote Dakuan from Ninja Scroll: "When you fight monsters, you become one yourself or you can't win!"

The OVA format of the show means we get all the information dumped on us in only four episodes. The problem with that is we have scenes of a robotic swan who visits Casshan in isolated spots and projects a hologram of his lost mother so he can converse with her and who then leaves and flies back to BK1’s castle and is consoled by the dictator. Wait, what? There’s no explanation for all this, and even the first time we see the swan, it doesn’t say anything. It just projects an image of a lady in a 90’s style business power suit. That’s it and from then on, she helps us, the audience, to know what’s going on in the world. Of course, Casshan takes all his marching orders from Power Shoulder Mom and doesn’t blink. This wouldn't mean much but he makes a big to-do about not wanting his former girlfriend to be hurt by his inhumanity. So, he cares for his mother and the memory of his father but need to be a robot for his former flame? Oookay. The show also has elements of Robin Hood in use that work in this setting for some biazzre reason. Casshan is treated as a myth by BK1's army, concocted by the humans to help them endure slavery. But for the humans, Casshan is nothing less than a messiah, sent onto the people to set them free. Oh, the Bible's Moses and Frank Herbert's Dune is being used here, I see. There are geniune moments when Tetsuya struggles to understand how he is supposed to complete his father's work and he suffers for it. We see Casshan fight to save people, remember his inherent nobility, and in doing so, reclaim his humanity. Not quite as overbroad as Christ myth material goes but I'm glad they didn't go for mentioning God at all. It's one aspect of 90's anime the show doesn't use 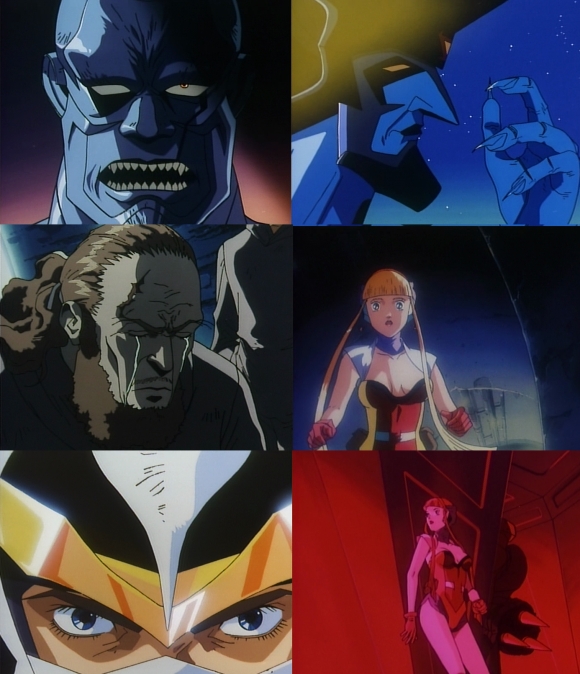 His girlfriend, Luna Kazuki, is a 90’s mixed bag. A capable, smart, and badass human resistance fighter, she is looking for her lover only to find he’s in another castle. I’ll give you two guesses who she’s looking for. Luna has a problem that most capable 90’s anime girls had: she has a soft side. Usually it’s a lost love, but occasionally it’s for a family that was annihilated. In Casshan, she has both. She finds Tetsuya only to find he’s become a creature of flesh and steel. From then on, she tries to awaken in Casshan the person he once was and the person she loved. It’s not a silly “I’ll love him until he knows what this strange human feeling is!” development, more like she knows that Tetsuya can never come back to her but Casshan needs her. Though, for all of my holding her up as a highlight, the animators have her in states of complete or half nudity for what I can only imagine is a required selling point. Ah, the 90’s. 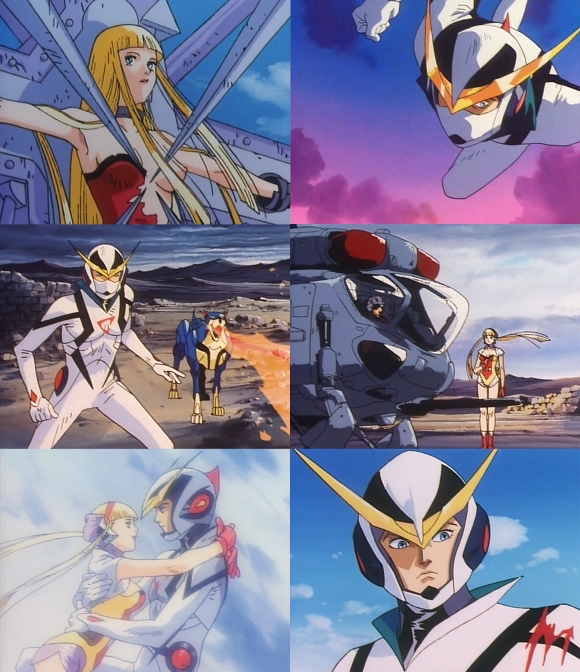 BK1 or, to give him a title that the English dub company came up with, Black King 1 is a strange, almost Shakespearean figure. He is going to wipe out humanity, come hell or high water. He doesn’t give a crap about who he grinds into dust to do it. At the same time, I can’t help to admire his reasons for war. Humanity has, really, made a balls of the environment and the only reason we don’t stop destroying our world is because there’s nobody around to stop us. Well, there is now. Interestingly, the show hints at the current leaders of the human resistance being concerned that it'll business as usual as soon as BK1 is destroyed. You almost want the synthetic homicidal maniac to succeed. For the most part, humanity doesn't really have any weapons to fight the robots with until Luna gives the human resistance the plans for a portable EM (Electromagnetic) gun. After that, it becomes a slaughter of the robots, but BK1 has a trick up his sleeve. Something about all the pieces being in place, blah, blah. You get the idea. 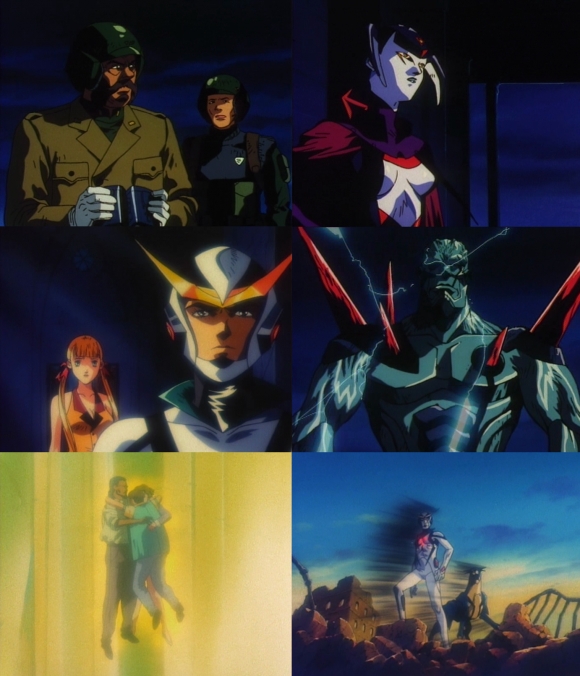 The final episode has everything that was awesome about anime of the 1990’s: a massive army invasion, senseless slaughter, a castle with a shit ton of lightning behind it, a final kiss between lovers and “YOU WERE THE CHOSEN ONE!!!”. Tetsuya comes to BK1’s fortress and lays the smackdown, all while humanity holds its breath. His final conversation with Luna is sweet and noble. It almost makes up for all the missteps and weird lines and character arc.

Casshan fights to save people, remember his inherent nobility, and in doing so, reclaim his humanity

"Casshern" is the correct Tatsunoko Pro way of spelling our hero's name but Streamline apparently mangled the spelling and spelled it "Casshan" so the title for this OVA simply stuck in English-speaking territories. Discotek kept the original mangling for their DVD release which is based off ADV's release but they title it as the Japanese do (see below). You win some, you lose some. On the up side, we get lovely animation of Casshan destroying stuff with his robotic sidekick, Friender. Plus Casshan gets a theme song by Hironobu Kageyama of future JAM Project fame. Oh, yeah that is what 90's anime was also good at: power songs.

I’m told that the reboot show from 2008 is a complete departure from the 90’s OVA. After seeing one or two episodes of the original series, I would say this series is more an homage to the original series than a reboot. Robot Hunter Casshern (its translated English title) condenses the concept into a four-episode OVA series which works against itself in some areas but for the most part entertains me.

Next month, I have an announcement to make about the Trap Door and where it's heading in 2014 and beyond. Don't worry, it isn't anything bad.