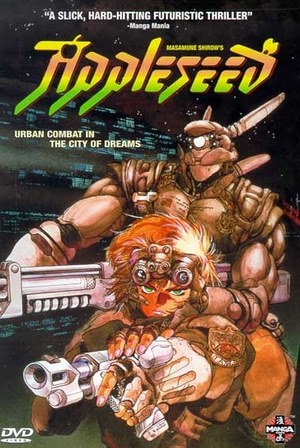 It’s weird how easy it is to adapt Masamune Shirow’s work into animation. With an almost labyrinthine lot of dialogue, gorgeous visuals and a complete disregard to pacing, his works allow other animators to fill in the blanks and create a derivative work that has all of the original’s strengths and none of its weakness. Of course, the works can only be as good as the people making them, and so we get to one of Shirow’s biggest works. No, not the other work. We’re going to talk about the first shot at the Appleseed OVA.

Here’s your government-recommended info dump for the day: in the future, World War III is fought and lost by its players. In the aftermath, society reorganises into mega cities and creates an ordered world with rescued humans and bioroids (biodroids in the OVA) who are half human, half robot. One such city is Olympus. Most of the conflict comes from humans who fear that bioroids are replacing them and since they live in paradise (computer-controlled environment, no crime, employment), there’s nothing to strive for. Into this comes Deunan Knute and Briareos, two former LAPD SWAT members who have been working into the remains of the outside world. In turn, they are found and rehabilitated by Hitomi, a bioroid who works at bringing in new humans from the wasteland. Deunan, a full-on human woman, and Briareos, a cybernetic man, quickly integrate with the local police service (E-SWAT) in Olympus. Now that you have your info, let’s get on with this.

Serving as more of a side story than a full blown origin story, the 1988 OVA from GAINAX and director Kazuyoshi Katayama skips the arrival of Deunan and Briareos and goes for the second volume of the manga: a terrorist attack on the main computer Tartarus that involves, in this order (and I’m not kidding), artist lofts, caged birds, beautiful women committing suicide, SWAT standoff going bad, terrorist attack going good, city administrators being kidnapped a lot, good cops being mentally tortured for the good of the city, high-speed chases, sh*t tons of bullets and ordinance being fired and marksmanship being improved on by a Heart of The Cards speech. Along the way, we get to see how butch Deunan is and how easy it is for Briareos as a seven foot tall cyborg to blend in with a crowd. Really ... it’s that simple. What I think worked about the piece is the fact that it hasn’t got much in the way of flashy visuals (a reversal of the problem that plagues its younger CG namesake), so it tries to tell a competent story with the time it has. I like Deunan in this; she’s a no-nonsense girl who knows how to eat, dress, shoot, and play with guns. No, screw it: I like Deunan in every version of Appleseed I’ve ever seen her in. The use of the Central Management Bureau (people who run Olympus) and its shadowy procedures was good, and long-time character Athena shows why she’s not to be trifled with.

But, and this is a massive but, the entire escapade is let down by two or three major problems. First, if you’re not familiar with the story, you’re dead. Briareos gives one throwaway line describing the events from roughly the first volume, and that’s it. Everything we learn happens on the go and requires previous information to make it all fit. Now, given as how this was made in 1988 and the manga was still being published at the time, this could mean the makers wanted to give fans a taste of Appleseed so that they would continue to buy the manga. But here, the manga was only published in 1995 by Studio Proteus, and Manga released the OVA in 1994. So people watching this would have been totally confused. Also, I refuse to believe that one person (the terrorist that our heroes are looking for) could hide in such a hi-tech city and not be noticed. AJ Sebastian (yes, that is his name) gets around, breaks into warehouses, steals data, murders people at will and only really gets caught in the act when he drives a giant death mecha around the city. Not a glowing endorsement of the E-SWAT team or their bosses. I like my two leads, but they are the only people the script deems it prudent to inform of anything. From the manga, Athena is a competent, if only a little ruthless, city leader. One moment, she’s sending our dynamic duo off to crack the case, and the next, she’s arresting them for conspiracy to commit terrorism. Hitomi is such a clumsy and smart girl, but watching here, you forget she’s an excellent data sifter and good-natured person. Here, she arrives back, gets drunk, gets kidnapped, nearly destroys the world, and is back for the wrap up PSA. No explanation is ever given for why Sebastian is doing all this destruction and murder. Granted, it wasn’t really gone into in the manga, and, yes, he seems a bit giddy when crushing people’s skulls and their buildings later on, but the writers could have stretched and filled in some of the weaker elements of the script.

Secondly, the animation is perfunctory at best. People talk for extended periods without moving or breathing; only their slips move. A SWAT breaches a hostage crisis and kills all but one hostage taker and uses flash bang grenades, snipers, and high impact rounds in a sequence that is more in line with G.I. Joe or Rambo: The Force of Freedom; there’s that little actual dynamism in it. The state of things would be better if there were no good animation, but there is ... especially when Deunan and Briareos are in a running firefight or racing down pedestrian paths on a motorcycle. This just makes the bad animation worse. Ultimately the sequence leads to a depressing viewing where you’re watching exciting developments but nothing exciting. This segment of the Appleseed story should be fun and tense, a cat and mouse game between AJ Sebastian and his police informant and Deunan and Briareos. But the reaction is more “oh, well, we’ll solve this pesky crime...at some point." Even Dominion Tank Police , which was released in the same year, somehow found a way to mix drama, slapstick, and mindless destruction in a better way than this. For the life of me, why didn’t they break each volume up and do OVA’s for each of them? It was a serious mistake to do just one story, and they picked the wrong volume to adapt. I know it made sense to adapt one of the more action-packed volumes, but it’s not that action packed.

The dub is an atrocious mess and has more bad language in it than a secondary (US people, read: high school) schoolyard. All of the old Manga UK London studio usuals are here, and they work with what they’ve got. That said, them cursing constantly and shouting and shooting at the same time actually improves matters, but by no means could this be called high art. The Japanese language track works and they take things in a more serious but ultimately less fun direction. For more action and less talking than this, please see Shirow’s other earlier work Black Magic M-66. For more shouting and more action, please see Dominion Tank Police. For more talking and more action, please see Ghost in the Shell. As for this title, buy it for no more than $5 and put it on your shelf. I’m going to wait for the new CG prequel, Appleseed Alpha, and see if Shinji Aramaki is still up to his usual tricks. As for me, it’s been about ten years since I watched this DVD last, and it’s probably going to be another ten years before I watch it again. It remains a condemned prisoner of the Trap Door.