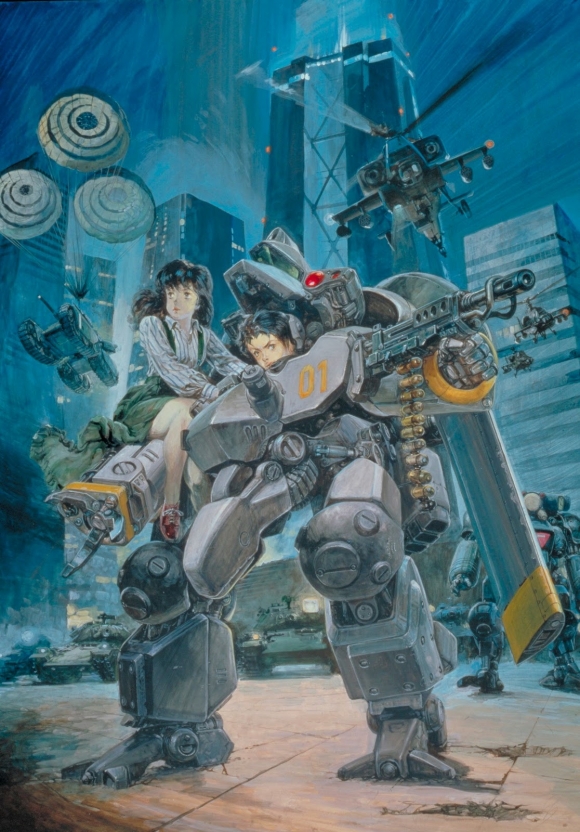 Apologies for the late arrival, but Phillip was ill and still managed to work through it to bring you this wonderful edition of the Trap Door. The next Trap Door will appear right on schedule.

If forced to describe MADOX 01 with one phrase, I’d say it was “It certainly tries.” It tries to blend mecha, action, romance, and comedy, but there are so many problems from the get go that I don’t know where to start. Let’s try to make sense of it anyway.

Kouji is a liked loser. He works at a mechanics shop, he has a nice girlfriend named Shiori who is moving overseas because her father disapproves of Kouji (le gasp!), and he’s just about making ends meet. On the other side, Ellie Kusumoto is a pilot and tester for the military’s new toy, the MADOX01, which is a combat suit that folds out from a heavy, duffel bag-sized brick into a suit of powered armor. She’s dealing with 1st Lt. Kilgore, an '80s villain (and no doubt about that) who wants to be able to test destroy the MADOX in an urban environment—i.e. where people will certainly die. While arguing the point with him, the military loses the MADOX when it "falls off the back of a truck" in the city where Kouji lives. Normally, "falling off the back of a truck" is a euphemism for stolen property; noting actually fell off of a truck. But here, that’s what really happens. Seriously, the world’s sleepiest driver crashes his car in front of the military truck and the MADOX falls off an overpass. If you thought there’s some kind of laugh to be had, no: the writers have the sleepy driver’s car explode in a ball of fiery death. While the military panics and runs around trying to find their toy, along comes Kouji who doesn’t mind looking at something like this, doesn’t think to call anyone, and promptly puts the suit on. Of course the suit won’t come off once on, all because Kouji didn’t read the manual. Yes, seriously, he put this on without checking. Anyway, he gets a message that Shiori will be waiting for him at (location) so they can say goodbye one last time. He’s got a combat suit bolted to him, but that won’t stop our boy from reaching his girl. Turns out that the military have caught wind of Kouji and send Ellie in the MADOX 00 to bring it back. When Ellie attempts to stop him, Kouji just wants to live long enough to see Shiori. 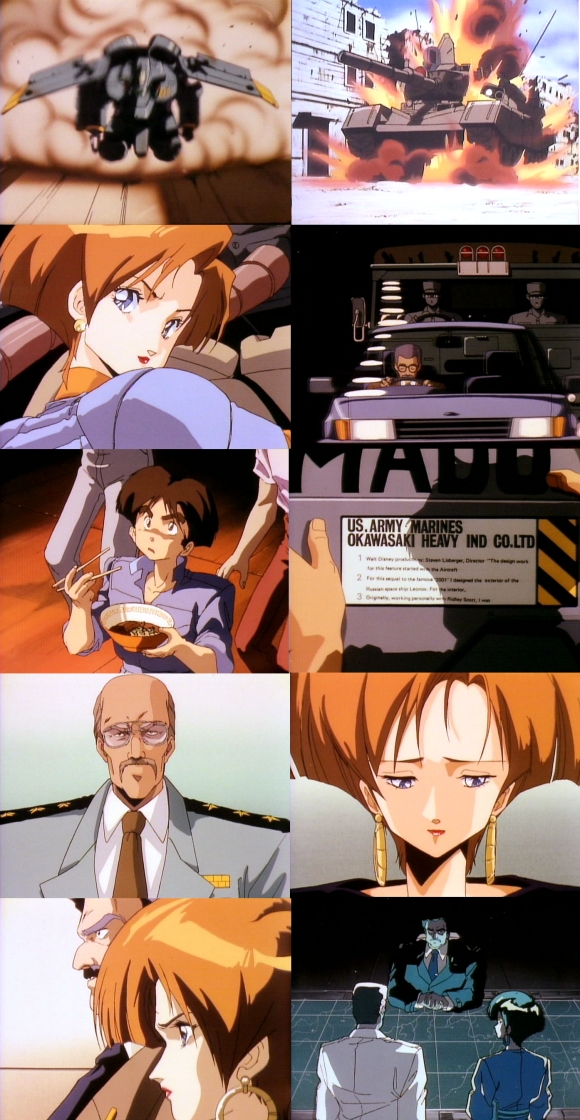 When the action slows to a localized area, the OVA works so well.

The film’s problem is that its ending starts while there are still twenty minutes to go in a fifty minute OVA one shot. It is rushing to finish just as we’re starting to understand why Kouji feels he has to see Shiori before she leaves. As an example: I love how Kouji trashes a convenience shop and tries to make amends by buying an instant microwave lunch. And it works! The dialogue and the visual gag of him trying to eat tempura shrimp with the MADOX robot arm and chopsticks is where the animators give a great sense of reality to a crazy notion. However, the mood is spoiled whenever Kouji has to start running again. When he’s out on the road with punks trying to run him off the road and responds by chopping their car roof off, that should be funny! But it just feels like they are stalling for time until the real fireworks start with Kilgore. When the action slows to a localized area, the OVA works so well. We get exposition before the MADOX is opened, why Shiori and Kouji broke up to begin with, and Kilgore’s growing madness—all while the show is sitting still. Why they didn’t break up the story into two parts is beyond me. It clearly needed to be done, but no ... we only get the one part. 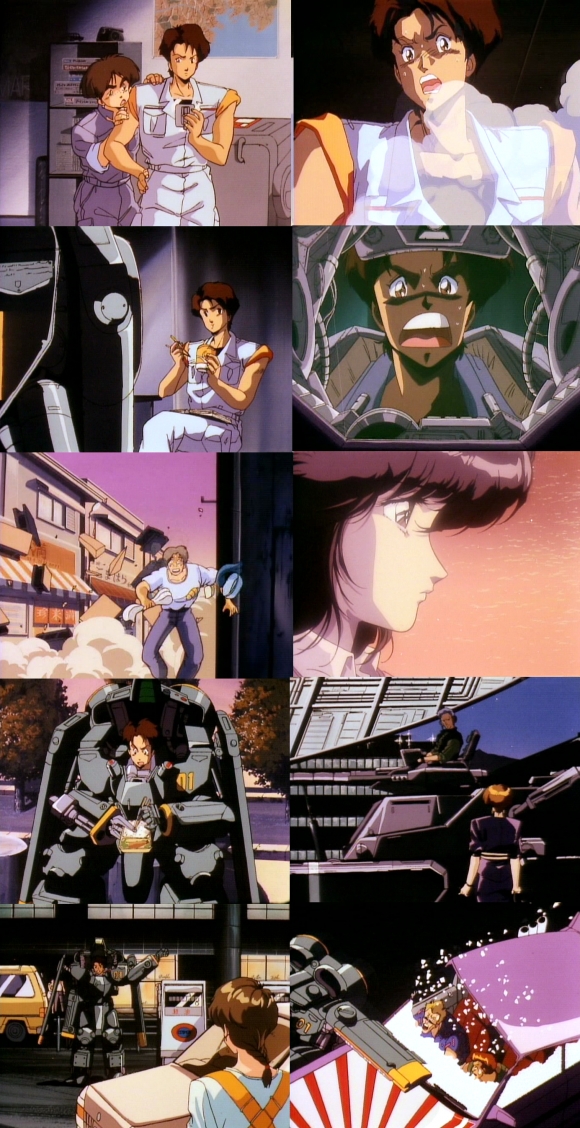 Kouji IS the hero, but I feel like we got to know Ellie pretty well. In spite of a very sexist opening for her, where the demo she does with the MADOX is summarized with “The MADOX was being piloted by Ms. Kusumoto despite her being a woman," she has a good backstory. She designed a very complicated system for the MADOX and she isn't overzealous about the system despite its superiority on the battlefield. She's the perfect counterpoint to Kilgore who is taking the obsolescence of his tanks rather badly. Her superiors trust her to get the suit back when it goes missing even though she admits to her boss that she accidentally left the suit in “Scramble Mode” (I don’t know why the hell leaving it in that mode was so bad). Well, they trust her more than the Lieutenant, but that wouldn’t be hard. His superiors remark that he was simply born in the wrong era. They’re right after all; he would be so happy with today—with his HAXXOOOOORS!! attitude toward the MADOX, his beer on ice for a perfect post-slaughter party, and his interaction with Ellie which can summarized with “I don’t care that you’ve got boobs, I’d hate you for inventing your killbot even if you were a bloke.”  Getting back to Kouji, his story works when he’s thinking as opposed to when he’s reacting. Watching him destroy downtown Tokyo should be fun, but the locals' reactions turn out to be funnier and work better. The suit defensively reacts to Apache gunships (in downtown no less!) by strafing it with bullets, and Kouji tries to stop it from hurting people but clearly destroys at least one gunship with two people aboard. The fact that his suit just murdered someone is never brought up again. In fact, he spends more time worrying about Shiori than anything else. I know a boy’s got priorities, but he's inadvertently caused a lot of destruction in Shiori's name. 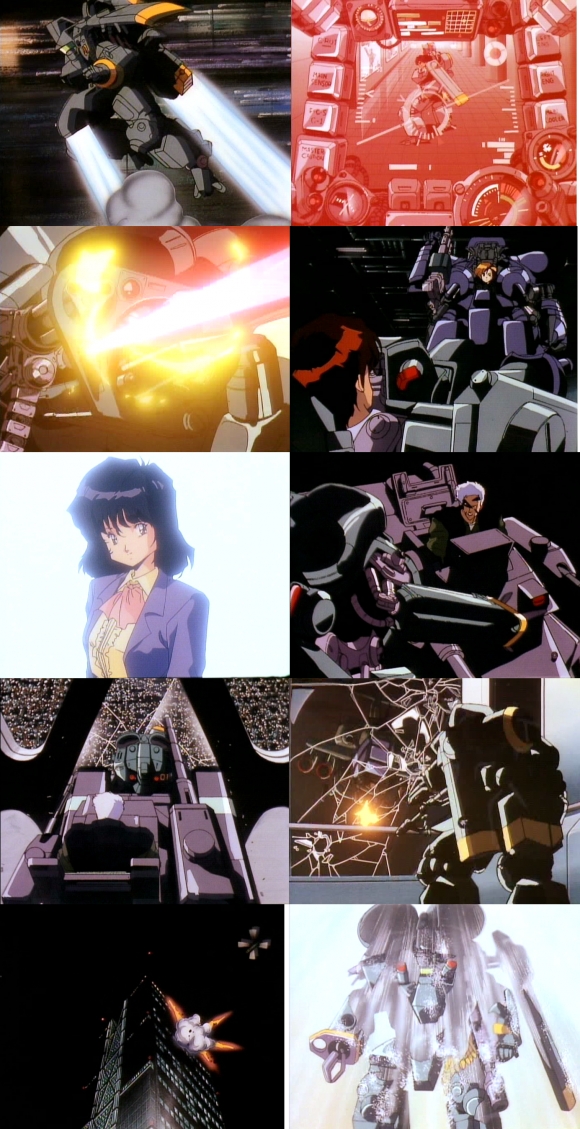 Not that the military come off any better. Aside from Ellie and her immediate bosses, Kilgore’s people function like mindless drones who open fire on people with RPGs and only afterwards decide that, you know, maybe they shouldn’t have been that gun happy? Kilgore starts off as an arrogant twit and turns into a full fruit and nutcase, because his killtanks are being outshined by Ellie’s killbot (see summary quote above). I get they were going for Apocalypse Now, but other than a glimpse of the film’s poster in Kouji’s room and the 1st Lieutenant’s name, that’s where the similarities end. Once he locates Kouji in the NSR building (where Shiori and Kouji are supposed to meet), he gets dropped nearby and decides to wait in the carpark for Ellie and Kouji. From there, he races around the building blowing up stuff, strafing Kouji with cannon and gun fire, while shouting things along the lines of “Is that all you got?!” He also has a distracting way of referring to Kouji simply as MADOX. More beer for the Lieutenant here; he’s clearly unwell. It's not a giveaway to suggest how the Lieutenant's story is going to be resolved. 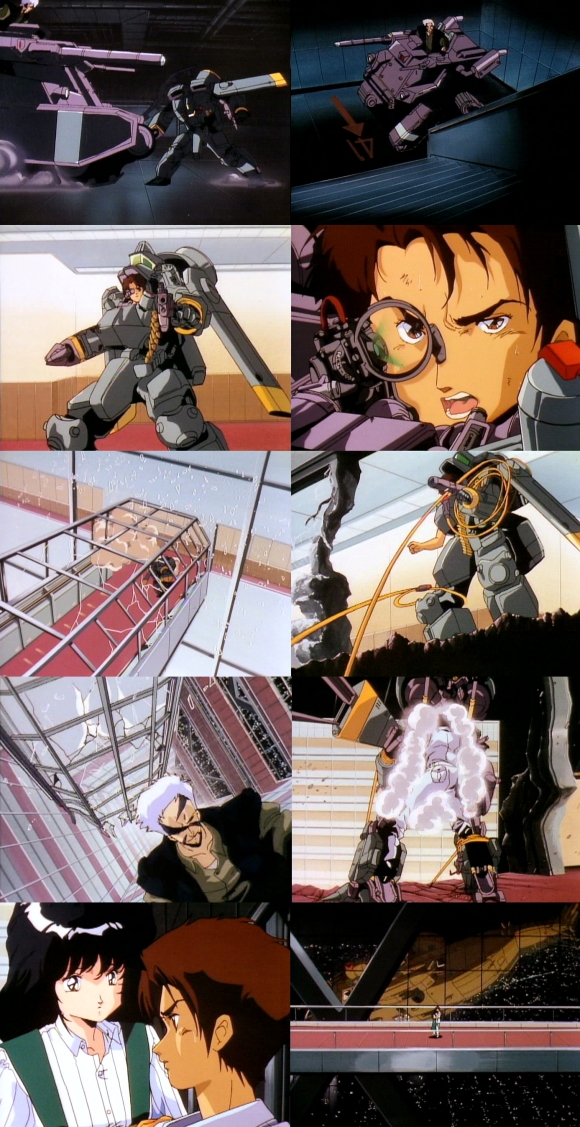 It doesn't look good as a storyteller if you just hope the story will fix itself.

With people like Shinji Aramaki writing and directing and Hiroaki Gōda animating with some help from Hideaki Anno, this could have been so cool. But as it is, it’s only so-so with some excellent character development and action drowning in a script that doesn’t know how to pace itself, a story that desperately needed a second part, and an ending that takes too long to finish. It's the best example of why you need to think before animating something. It doesn't look good as a storyteller if you just hope the story will fix itself. For this reason, I'm afraid, it cannot and should not escape from the Trap Door.