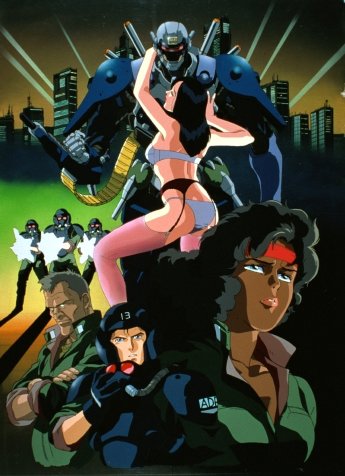 I think the Bubblegum Crisis universe has a lot of potential as a franchise. It’s had TV shows, OVAs, videogames, novels, manga, and audio dramas. If the live action version ever gets off the ground, the franchise will have cornered most entertainment industries. But in the aftermath between Youmex and ARTMIC (creators of the first show) over where the show should go and its length, they produced a prequel series featuring BGC’s Leon McNichol. Darker and edgier than its predecessor, AD Police (not to be confused with its later 1999 TV reincarnation) blends the police procedural with a bitter and cynical view of man’s dependence on technology.

Set five years before the events of BGC, the world of AD Police has the special police squad fighting boomers (cybernetic robots that have gone out of control), but evil corporation Genom isn’t really in the picture here. It’s more a case of people being more than capable of screwing up their lives without help. Men and women in the division are wiped out by the mechanical creatures on a daily basis, and they’ve adopted a kind of hellish fatalism. That’s to say they’re totally OK with getting killed so long as someone comes after to finish off their target. Leon just transferred into the division after successfully stopping a boomer without any backup. He’s still carrying a lot of baggage with him about that incident when he was regular PD. Paired with Gena Malso, an AD cop with a cybernetic right arm, he doesn’t get any breaks when he’s put into the department. Similarly damaged, Gena worries that her enhancements will eventually cancel out her humanity. A girl with a killer instinct, she craves physical and sexual release from her high pressure job working on the front line for the department. Together, they form the bulk of the stories in AD Police.

What I like about this take on the AD Police is that, unlike in Bubblegum Crisis, the AD Police are both the only thing to protect the city’s people and also the main reason they’ll die a violent death. The AD Police, charging into a boomer out-of-control situation, destroy buildings, cars, and objects alike. They straight up murder the aforementioned boomer without so much as a by your leave. Rockets, lasers (!), knives, shotguns, handguns, cars — the AD Police will use whatever is at hand to get their robot man/woman. They nearly run over people, charge businesses for the service of destroying a boomer by wrecking the local area and leaving them with the bill, and then they all hit the bar and slam back drinks until they’re liquored up enough for some lusty sex with each other. It’s a shame the death rate for on-the-job AD Police officers is so high. Otherwise, this would be an adrenaline junkie's dream. Furthermore, the people in it are all two steps away from suicide, burnout, or worse. When they stare into their drinks in the bar, they look like they’re trying to convince themselves this is the life for them. 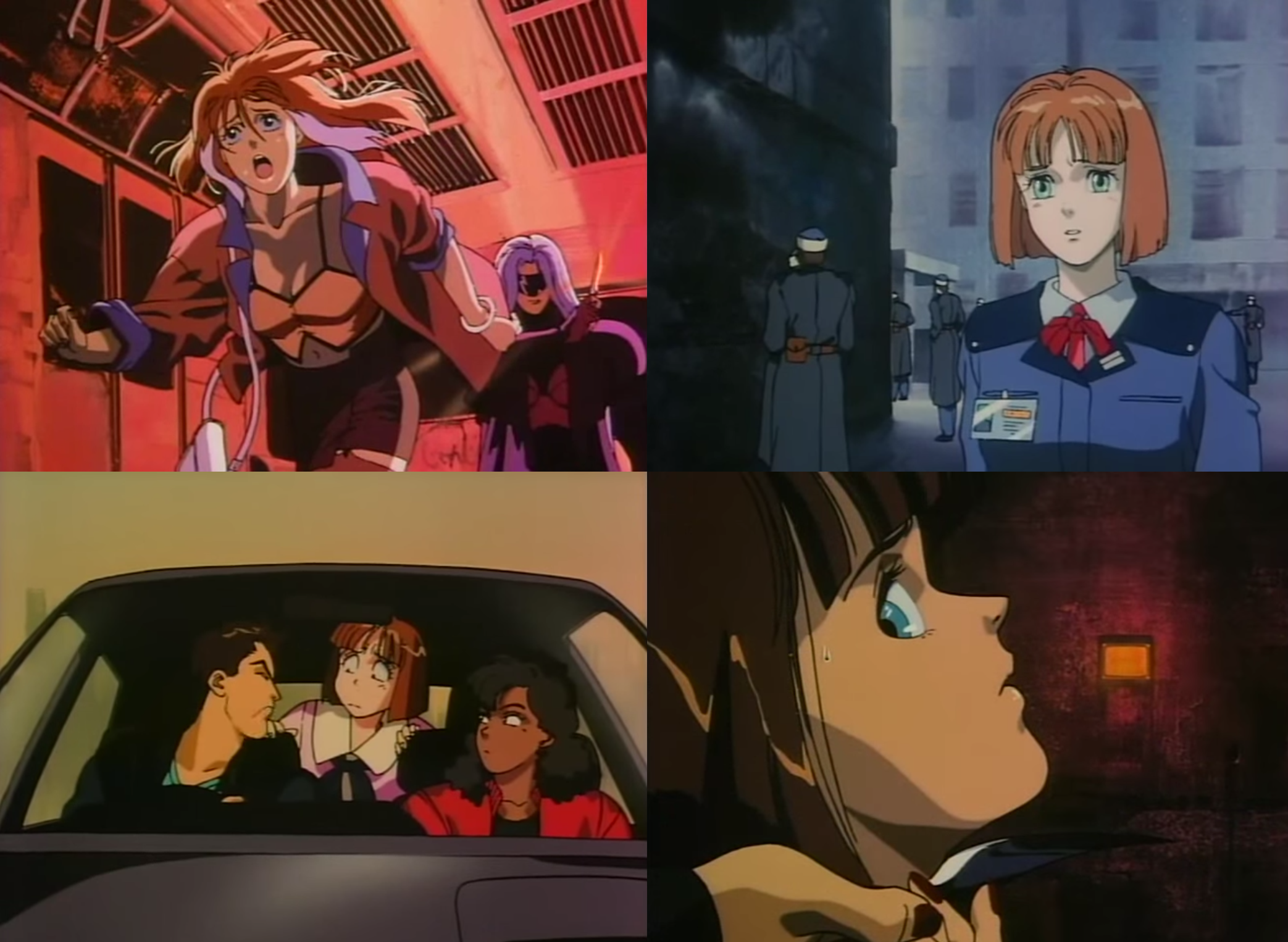 The stories themselves concern a range of complex ideas, like the role of women in Japanese society, the limits of the human mind to cope with psychological trauma, the emasculation of the social aspect of humanity into a more technologically constrained one, and the damaging capability of humankind when it comes in contact with artificial life and cannot process it. In episode two, a killer is stalking the tunnels of the abandoned subway. After conforming to every rule society had for them, it still rejects them. In their madness, they begin killing to cleanse the tunnels of the people who led to their downfall. Amazingly, the AD police reason that since they’re part cyborg they don’t deserve due process. They attempt to gun down the killer in the same way they hunt down their prey. Director Takamasa Ikegami contrasts the crazed inhumanity of the killer versus the calculated inhumanity of the AD Police. Sadly, the killer had better reasons to kill. The contrast of the police being unable to cope with such a damaged person is thrown into sharp relief by Leon reassuring Gena that she is not going to lose her humanity simply because she has a cybernetic arm. In the previous episode, Leon berates a junior in the department for wanting a cybernetic eye to relieve eye pain. This makes Leon somewhat hypocritical: you’re still human as long as you hate your enhancements, but the minute you don’t, you’ve lost your way, brothers and sisters. I didn’t expect that in a three-part OVA. Leon himself borders on wanting to save lives and being as cold-hearted as his fellow AD Police buddies. At times, he has a dislike for voomers (non-violent, compliant cyborgs) and boomers that comes close to hatred. On the other hand, people have become so used to cybernetics that they don’t even want to fight to keep their organs, their limbs, and their humanity. It’s just easier to get a “better” replacement, as if they’re describing changing out a light bulb. There’s a desensitizing element, which echoes into today, where life is becoming cheaper and cheaper and we’re all wondering what the next low point in how we treat and view each other will be. In AD Police, they’ve reached the bottom of the scale, and they’re OK with it as a society. As for Gina (or Jeena in some translations), she’s further along the path than Leon, and I can see her getting out of the department and trying to salvage her sanity if she can live that long. She starts the show as an action addict, but as the story wears on, she has doubts about her flesh — both real and artificial. By the end, she’s disgusted that so many good people are dying in the streets, alleys, and backwaters because nobody can stop it.

The animation on display is good for an early ‘90s anime OVA. Most of the money goes towards the action with plenty of destruction and death. The character models were not designed by Kenichi Sonoda, so it will take you a while to recognize Leon in the first episode. By episode two, he’s donned the familiar green t-shirt, black leather jacket, and shades, and we can see where the show sits in terms of Leon’s evolution. Fujio Oda, Naoyuki Konno, and Tooru Nakasugi design characters who can be described as different yet sit within the same tone. All the mysterious women look the same, the guys all look different, and the background characters don’t look interesting at all. The net effect of all this is that cast looks really diverse. I think this was accidental, but I’d stand to be corrected. The best episode to see every skill of the production team has to be the last: The Man Who Bites His Tongue. In it, a former lover of Gina and a fellow AD Police officer is rebuilt as a super soldier cyborg with only his brain and his tongue remaining from his old body. It’s a retelling of Robocop, but here, Robocop does what he should have realistically done: he goes insane after having all his senses cut off and begins killing everyone. I didn’t say it was the best written episode, but at least it’s being honest with itself. Lots of dark corridors illuminated by single lights. Huge open squares where cyborg gladiators fight to the death. Centered shots of hallways and chairs. Weird and edgy moments where our former human bites his own tongue to remind himself he’s alive, or when his doctor climaxes on top of his legs to help stimulate him. All of this is animated with precise detail. You get a sense that they’re leading us further and further into the poor man’s psychosis until it culminates in a sub-basement corridor, where Gena’s staring down a high power rifle at a man she loved who’s begging to be killed and released from the very hell he signed up for. 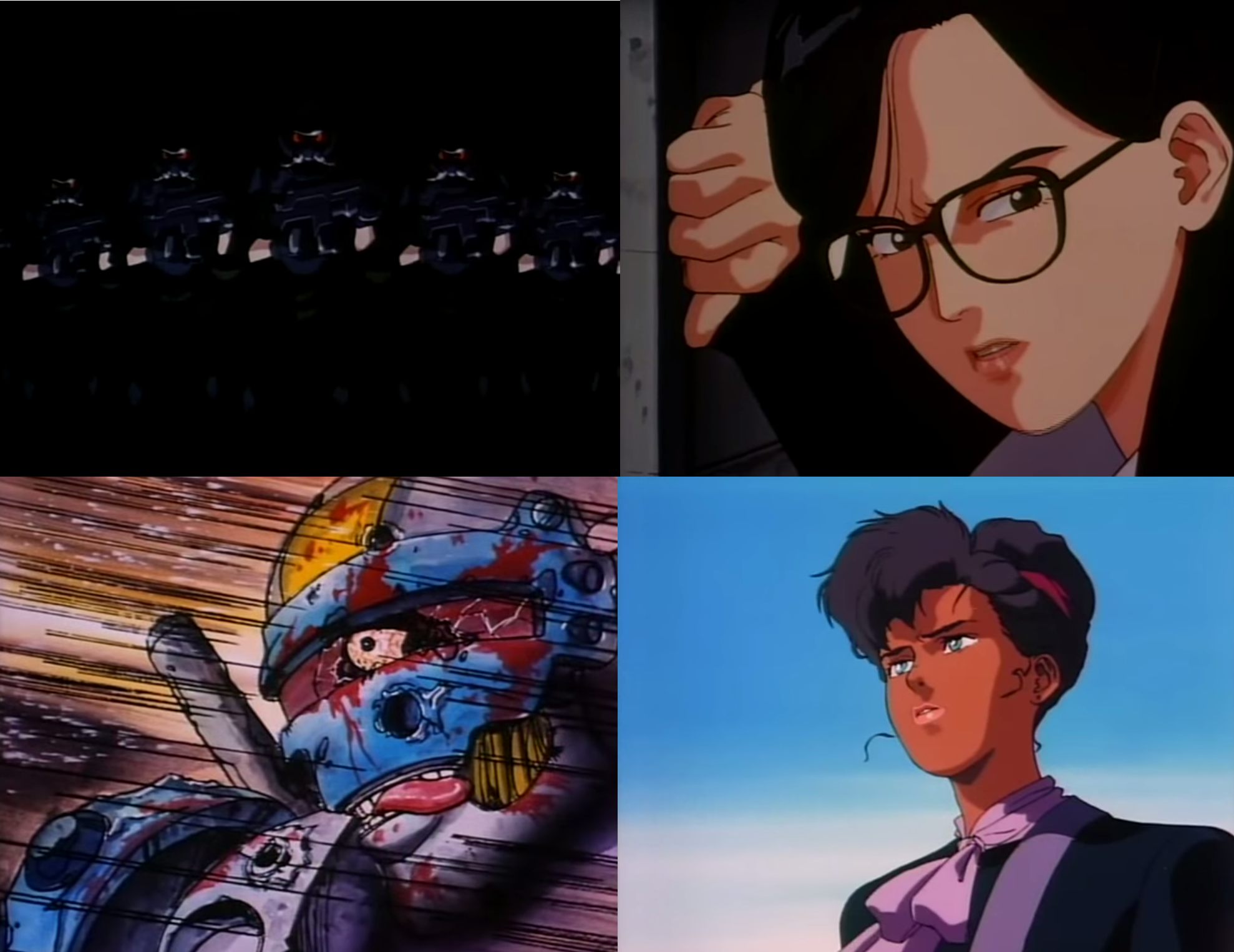 Finally, we have two English dubs and the original Japanese audio track floating around in various releases. One dub was commissioned by Animeigo, which is on their home video releases along with the original track. On my out-of-print Manga UK DVD, there is only their dub. I’ll repeat: you could only experience AD Police in the UK/Ireland if you listened to a dub by Michael Bakewell. There is a God and he loves us on this side of the Atlantic. Bakewell does his usual job of hiring English actors to pretend to be American and scream obscenities at each other, the bad guys, and the camera. As such, I doubt that the script Mr. Bakewell commissioned looks anything like the original Japanese version. Oh, well. There’s always Animeigo’s DVD to buy … I suppose.

AD Police is a better look at the BGC universe, and in a strange way, I’d suggest you watch it before BGC if you’ve never seen either. BGC is a great show and deserves the place in the hearts of its fans. But AD Police shows how the AD Police deal with their tasks without the aid of powered armor suits. The AD Police department will probably die on the job. They’ve accepted that and know the value of such a general feeling in a city and world that is rapidly becoming valueless. It’s a more realistic, dark, and violent view, and the Trap Door gets gunned down by AD Police officers as they walk out and grab a drink.