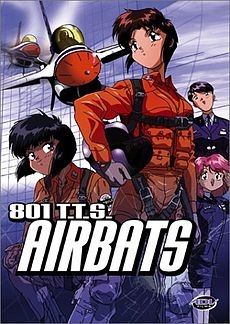 Top Gun has a lot to answer for. The eponymous 80’s action-adventure movie sparked a craze of imitators in the decade with things like Idol Defense Force Hummingbird (Maverick meets Macross!) and Area 88 (yes, it was started in 1979 but got its OVA after the Tom Cruise movie came out) leading the anime charge. Then there’s 801 T.T.S. Airbats. Supposedly the adventures of the all-female tactical training squadron, Airbats is really one part romantic screwball comedy and one part all out misfit-ery. In many ways, with its emphasis on story over spectacle, this series is the reverse of the Hollywood film it is attempting to ape.

The main character, Takuya Isurugi, is a bit of a wet drip. In that amazing trope of anime, this milquetoast young man somehow gets both of the lead pilots in the squad seriously weak for him. Miyuki Haneda, being the otaku bait of the series (meek and mild around our uber-man), totally falls for him and spends the most time in the series succeeding for Isurugi’s affections. Arisa Mitaka is the dusky skinned, tsundere character, teasing and aloof. She spends most of her time pretending to be above such girlish crushes but, in reality, she’s more girly than Haneda. How this idiot who just transferred into the base has both girls after him is sometimes beyond me. Now, normally I would let it slide, but it takes less than an episode for them to stop thinking of him as a pervert and stop working out ways to win his love. That’s gotta be some kind of record. But the best thing about OVA series is that they HAVE to have a compressed timeline. So after three episodes of the two girls fighting and bitching over Isurugi, the series simply resolves it and moves on. Just like that. No real fallout, no tears.

Then Airbats does the best thing possible, I feel, and becomes a farce. We also get to find about the background characters, like Captain Konishi, who is my favourite commanding officer. He is constantly jumping from crying aloud when the girls do something insane, plotting with them to gain money at the racetrack, getting one over on the base commander, or just surviving the day. His right-hand person is Sakura Saginomiya, a pilot in her own right who is also a shark at gambling and revels in manipulating the squad when it suits her. She doesn’t do it to be bad but still never sees the pain the squad gets put through as something to worry about. I want to talk about the youngest member of the squad, Yoko Shimorenjaku, but I will save it for later. 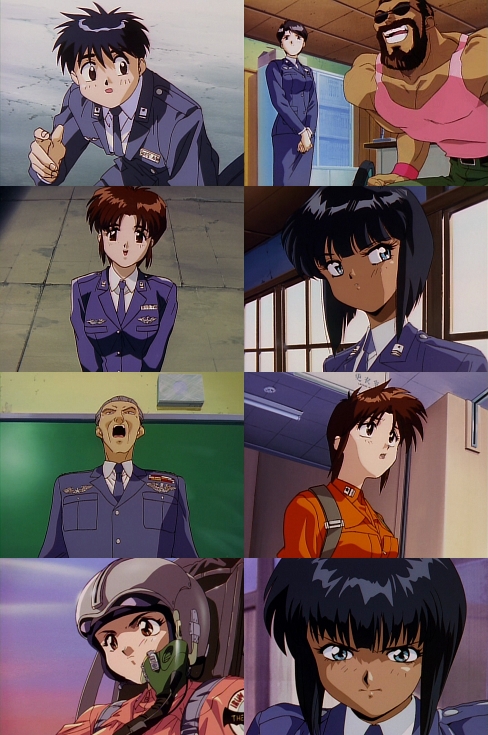 The series spends its time showing off dogfights and aerial combat maneuvers, and absurd comedy fills any downtime. Not the “oh, no! He touched my breast! I will now punch him” style of comedy that anime invented in the 70’s and 80’s and perfected in the 90’s, but the far side of bawdy comedy that will get giggles but not eye rolling. The animation and character designs are by one Yuji Moriyama, who worked on Macross Plus, Wings Of Honneamise and, most importantly, my favourite 1980’s anime movie: Project A-Ko. Moriyama just loves the female form and he also likes planes, so really, we know how this show should pan out. The action won’t be up to Top Gun’s level but it takes a decent stab at it. Moriyama does an excellent job at directing, blending the aerial combat sequences with a nice mix of the serious and the casual on the ground. I mean serious in the sense of the crossroads the characters find themselves in, which get resolved too easily for my liking and thereby negates their point, and casual in the sense that nothing is off limits. Threatening to derail the cheesecake and fan service angles is the recurring idea that women in Japan, especially in the military, face a constant glass ceiling. It also touches off the idea that ordinary Japanese people don't like it when their own act worse than the guests. 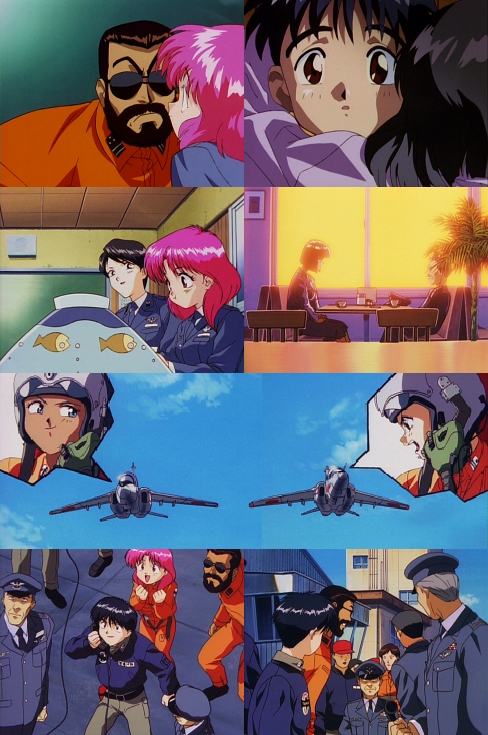 My favourite episodes are the hot springs episode which sets a new record for the most flesh seen outside of an Ikki-Tousen broadcast and the episode where the American combat stunt team comes to compete against the 801st. The amount of casual racism in that one impresses me every time I think about it. From the pidgin English to the all-out insults directed at our amazing Japanese team, it’s a marvel. If the series had less comedy and more serious drama, then I would say it was the airplane version of Patlabor. As it is, Airbats is a curio, and as such, it probably cannot be exploited for more than a great evening or rainy afternoon (although the Ramen episode is excellent enough to be a viewing experience on its own). 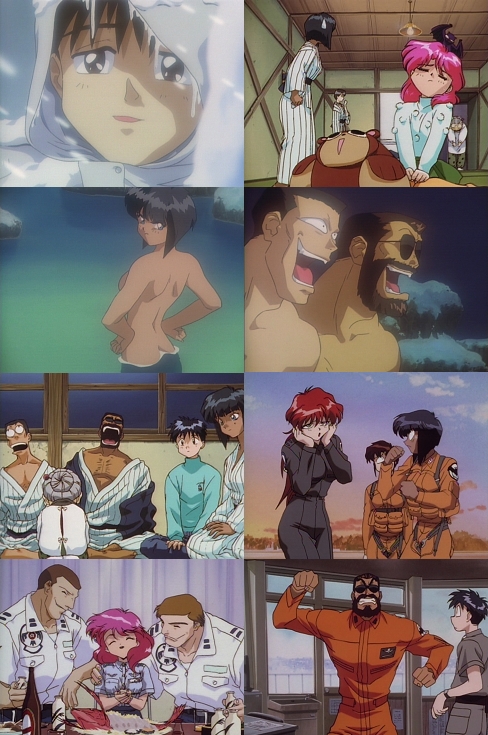 Some things I must address about the ADV release from 2002: first of all, ADV must have known having the word TTS in the title would lead to double takes. The original title in Japanese translates as The Blue Sky Girls Squad, so I refuse to believe Matt Greenfield and John Ledford didn’t know what they doing there. Secondly: the dub. Oh My God. This is the most amazing dub I have heard ADV do. On one side, we have Sascha Biesi as Haneda and Stacey Sperling as Mitaka just playing it straight and getting on with it. On the other side, David Arnsberger as Captain Konishi sounds like an East Coast surfer version of Patrick Warburton. He is the highlight of the dub and only equalled by Norio Wakamoto in the Japanese track. Then we have Maxine O as Yoko Shimorenjaku. If it’s possible to find a Texan version of Mister Hanky, they found her. Maxine O’s voice is so shrill and grating that by the end of the series you’ve become numb to the pain. Rewatching it in Japanese, I still hear Maxine O’s version. Amazing, simply amazing. I actually prefer the English dub over the Japanese one. I never thought I would like it that much. 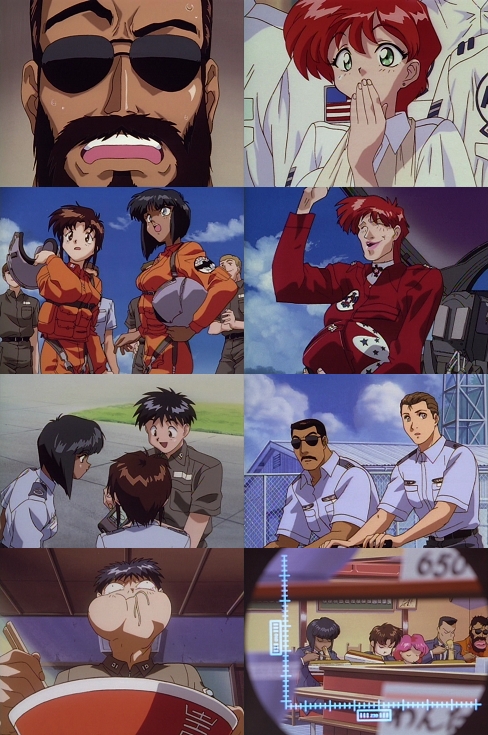 The series is one that I've had my eye on for ages. It was actually the first one I imagined would be a perfect fit for this column. Happily, I can say that I was correct. This is a series that was probably popular for five minutes when it was released and then forgotten. It deserves to be found again and maybe even rescued by someone like Discotek or maybe even Sentai. In the end, Airbats should have lead to more material; it’s a shame that it didn’t and that this is all we enjoy. As it is, Airbats can be find on Amazon Marketplace (though I wouldn’t say one price of $159 is worth it) or eBay.com for small-ish prices. Have a gander, it’s on day release from the Trap Door.