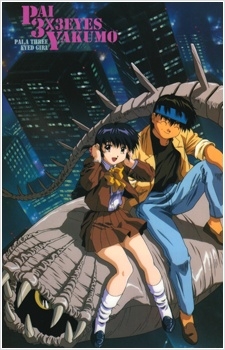 I've always thought the concept of the OVA was a neat thing. Throw some money at a creator or studio, produce a single episode, and see if it flies. If it does, make more. If not, eh, no matter, this economic bubble will never burst, right? Amongst this sea of titles, there lies a hidden gem of a series. Based on the 40-volume manga by Yuzo Takada (All-Purpose Cultural Cat Girl Nuku Nuku, Blue Seed), it’s one that I’ve liked since first walking into the medium of anime. Starting off in a guise of a simple request made to the hero by a deceased father, it slowly takes in globe trotting, Chinese mysticism and end-of-the-world showdowns. I am, of course, talking about 3x3 Eyes.

Pai is a reflection of the people she comes from and Yakumo is an example of the humanity she wishes to join.

On first entry into the world of Yakumo Fujii, we see he’s a kid trying to make his way in Tokyo. He’s working as a cross-dressing waitress/hostess (woah, talk about watching stuff at an impressionable age!), trying to make ends meet when he meets a young Tibetan girl called Pai who comes to find him in Tokyo. Of course, this isn’t an ordinary girl. She’s really 300 years old and Yakumo just stepped into a new world. Part of the appeal of the first arc in the OVAs (which incidentally, only cover up to volume 5. Of 40.) is that even though Yakumo seems to begrudge his father for sending him on a godforsaken quest, he quickly realises that without his help, Pai’s journey from immortal Sanjiyan to normal human will never happen because of the sinister forces who want Pai for their own reasons. I think that’s what gets you hooked into the series. It starts out as one thing and slowly evolves into something unexpected. One part mystery, one part magic kung-fu adventure, it’s when battling people with only your wits and an indestructible body and  things look dire that Pai’s unquenching faith in Yakumo pulls them through. They really do develop into a good team despite Pai’s older, more stern alter-ego Parvati being hard on Yukumo. After seeing threats off to Pai, Yakumo’s friends and their new allies on the quest, things look like they might be improving. Then the first arc ends with the best and most depressing cliffhanger ever! The second arc starts with some normalcy but when director Kazuhisa Takenouchi (Interstella 5555, Sailor Moon) wants to pull the rug out from under you, he does it in style. To this day, all my brother has to do for me to remember 3x3 Eyes is say “There, there. You poor, poor girl.” Creepy. 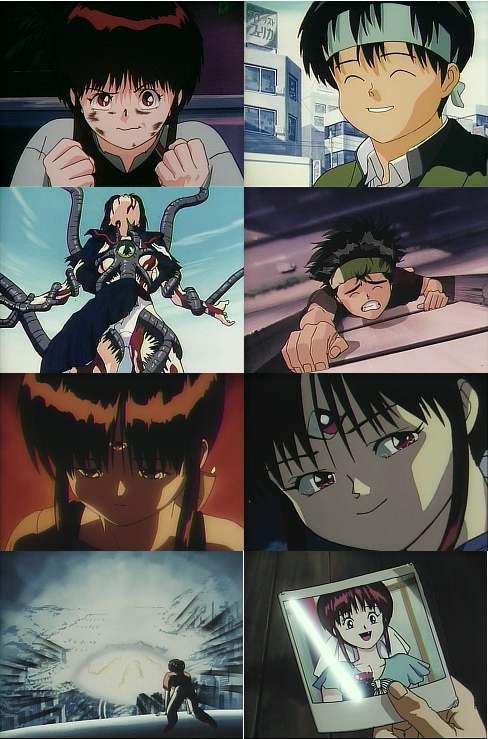 The series' ability to just turn on the blood is amazing. Not counting the incident that transforms Yakumo into Pai’s undead servant, buses, blows to the chest, head, arms and legs are all used to show just how much of a human punching bag the boy is. People get burnt alive, lacerated or just plain wiped out. I’ve only read the first six or so of the Dark Horse manga so yeah, it’s faithful. Also, Pai’s alter-ego Parvati is a reference to a Hindu god and the show has a lot of Eastern symbology and overtones. If nothing else, it provides support to hang the rest of the show on. 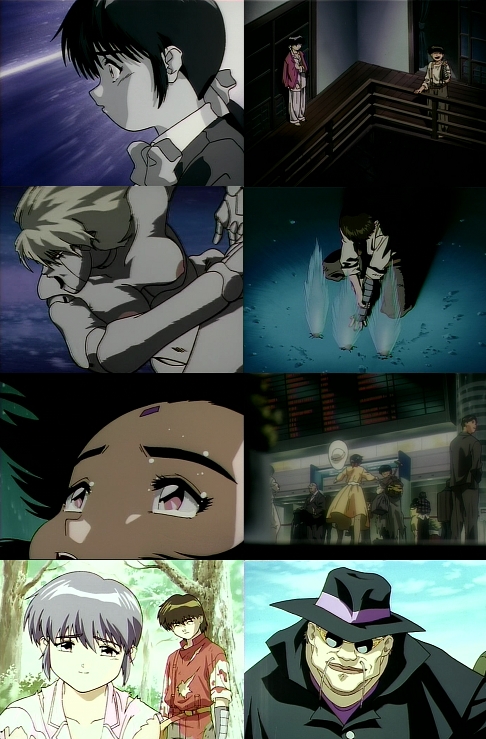 The characters are nice enough so long as you get into your head that Pai and Yakumo are the only real important characters. And they really are good characters, with Pai being a genuine, sweet girl who just wants to be human. Her other self is a vengeful creature who seems to ignore the sacrifices that Yakumo makes for Pai, though that attitude does soften somewhat during the series. Yukumo just wants to help Pai despite calling her a bumpkin when they first meet. And Lord, the torture he goes through to help her. But he sees the good in Pai as she is a reflection of the people she comes from and he is an example of the humanity she wishes to join. The rest come and go, but it’s the main duo who holds our attention. The people who help the couple range from those like Lee Ling Ling from China who starts out an unbeliever but quickly adjusts to those like Jake McDonald who know enough to be cautious. The rogues gallery is kind of diverse: they could be a sexy demon lady or a gross, disgusting blob that likes to take over nubile young Japanese girls and have underskin tendrils coursing through their bodies. You win some, you lose some.

3x3 Eyes is the perfect antidote to a hard day’s work; grab some beer and curry and get ready for a great time. 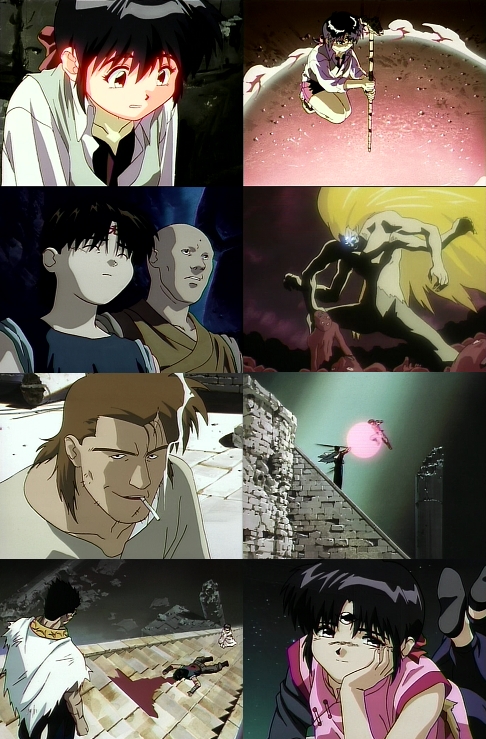 The main reason I know of this series is that Manga UK had the TV rights to it years ago and ran it late night. I, of course, taped them onto good ol’ VHS but over time they got accidentally recorded over so I’ve always wanted to own it on DVD. Just before Geneon went bust, I got the two DVD’s for a steal online but then the catch came. The dub I grew up, the Streamline one by the late Carl Macek, had been replaced with a new dub by Greg Wiseman from Geneon with such people as Keith David as Mama of all people and Ed Asner as Pai’s “Grandpa.” I know I’m nitpicking, but I liked my old dub and now when I watch the DVD, I prefer the Japanese track. The English track which is OK, it just makes me pine too nostalgically to the old one.

3x3 Eyes goes nowhere conclusively but has a strong ending after a decent narrative. The sad fact is that as anime has become more insular and the market in Japan has shrunk, OVAs like this are all but extinct. That’s a shame, because it’s the perfect antidote to a hard day’s work; grab some beer and curry and get ready for a great time. At points tender but able to turn viciously into straight R-rated horror, it’s a good title to find and own.

3x3 Eyes is still available from Amazon US, RightStuf, and Barnes & Noble. If you're interested, I'd suggest picking it up now rather than later. Also, keep your eye (no pun intended) on your local convention's dealers room.