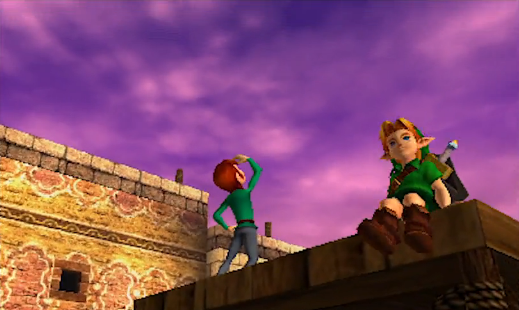 I haven’t been writing about games very much on Ani-Gamers of late, but over the past year I’ve been actually playing a bunch of games again. And what better way to get back into the swing of things than with my favorite game of all time: The Legend of Zelda: Majora’s Mask? As I started playing the new 3-D version on the Nintendo 3DS, it occurred to me that I have a lot to say about this game, and a column might be a fruitful way of getting those thoughts out. So, welcome to Termina Travelogue, a periodic feature in which I will report in as I play through Majora's Mask 3D, describing and analyzing what I think makes Majora’s Mask so great (hint: pretty much all of it).

If you're not familiar with the game, I won't be explaining it here, as I want to focus on my reactions, but feel free to read up on Wikipedia. Anyway, for my first column I want to talk about mood, one of the things that makes Majora's Mask stand out from other Zelda games. 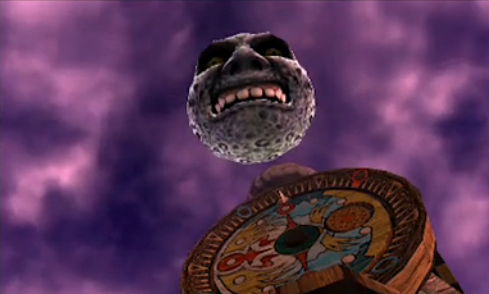 From its first moments, Majora’s Mask is all about atmosphere. Setting aside the murky forest of its opening sequence, the first time you see Termina proper, it’s introduced via the ominous clunking sound of Clock Town’s famous tower and a title card reading “Dawn of the First Day: 72 hours remain." That's your first taste of darkness, but the real brilliance, as usual, is in the contrast.

When you walk out of the dark innards of the clock tower, you find yourself in a sunny, bustling town with giddy music blaring in the background. It seems that everything might be OK after all. However, the initial tone of the game foreshadows the danger lying underneath the surface, and of course, you soon discover that the moon is about to crash into Termina — killing everyone in Clock Town and beyond.

In the first run-through of the three-day cycle, you don't have access to your Ocarina and need to get to the top of the tower (only accessible at midnight on the final day), so you are forced to witness the entire thing from start to finish. If you play this sequence as intended — that's to say you don't just leave the game idling until the clock tower door opens — you have a chance to see the town transform over three days. At first everyone is gearing up for the festival; only a few citizens are worried about the maniacally grinning moon overhead. By the third day the town's decorations for the festival are nearly finished, but panic has set in as the reality of the moon crash dawns on all but the most stubborn of the city council. Guards warn you to flee town before midnight. The councilmen and the guards can be seen arguing in the mayor's office. The town has the same happy background music, but now there's a dissonant undertone that implies that something isn't right. By the night of the third day, Clock Town is a ghost town with a few scattered leftovers cowering in fear at their oncoming doom.

By witnessing the onset of the apocalypse firsthand, you can gain an appreciation for the importance of your time travel abilities and the changing state of the world over three days. It especially drives home the morbid reality that every character you meet in Termina is going to die. Even as they happily go about their business, they are already doomed. This contrast — a cheerful world tinged by a hint of apocalyptic resignation — is what makes Majora’s Mask such an interesting, multi-layered experience. 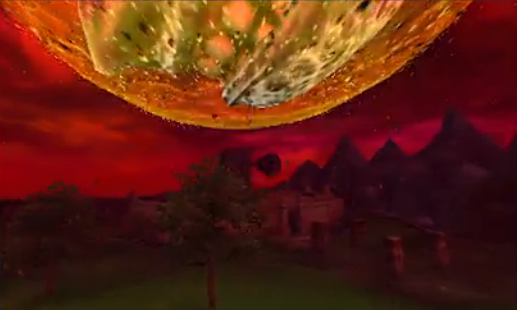 The game never confronts questions of multiple timelines, but there are dire consequences that depend on the mechanics of the Song of Time. When Link goes back to the dawn of the first day, does he create a new timeline? Did all of the people in the previous one die? If so, he is essentially abandoning the world — leaving everyone in Termina to die over and over until he finds an outcome that works out in their favor.

There’s a lot more to discuss in Majora's Mask, but I’ll leave it at that for now. I’m heading to the Southern Swamp now, so I’ll be back before long with more Travelogues!

Check out more Travelogues here. You can buy Majora's Mask on Amazon

and anywhere else video games are sold.