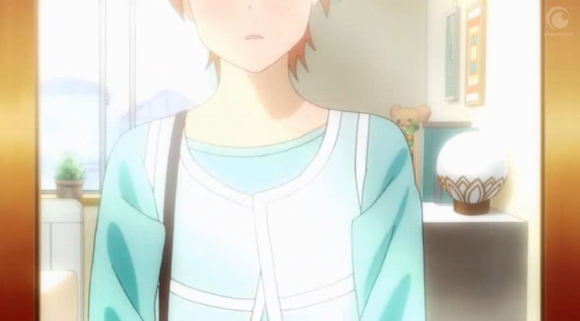 Although Wagnaria!! (Working!!) depends upon situational humor bolstered by writing that relies (in part) upon repetition of such shallowness as tropes and the interaction of caricatures for quick punchlines, the series is also aware of that fact and occasionally uses its self-actualized state to goad audience appreciation. Case in point: the first minute and seven seconds of the last episode in Season 1—more specifically the latter 37 seconds as compared to the first 30 seconds (which represent the animation of the series as a whole)—wherein a young man casually leaves his house and a young woman prepares for his arrival and their subsequent departure together.

After watching 12 episodes worth of standard animation, viewers think nothing of watching the succeeding 30 seconds of the next episode under the same conditions … until a camera hold and noticeably increased fluid motion buck complacency by reflecting just how manic and under-animated the series has been thus far by comparison. Defying the expected, the next 37 seconds not only stop pandering to the omniscient viewership norm (constant cuts focusing on whoever’s speaking) but also hone focus and seemingly slow time by increasing the level of detail given to Inami’s movements. The resulting fixed point of view and portrayal of smoother motion makes the scene stand out. But why here? Why now?

(Click on the above picture and watch until time stamp 01:07)

Well, this scene is the precursor to the season’s climax. Inami is about to go on what she perceives as her first date with Takanashi, the young man for whom she’s fallen and who is also her coworker and the one tasked with attempting to cure her downright dangerous androphobia (abnormal fear of men). While taught by her father to distrust men (with extreme prejudice), Inami has, for the first time in her life, become enamored of a male, and his importance to her is 3-fold: coworker, therapist, and love interest. So it’s easy to see why she’s stressed about the date. The preceding episode took care of all the cliché overexcited indecision regarding preparation and sleeplessness. What this particular moment in Episode 13 highlights, what this particular Snapshot focuses on, is the dedication to the ritual of mental preparation via physical assessment. 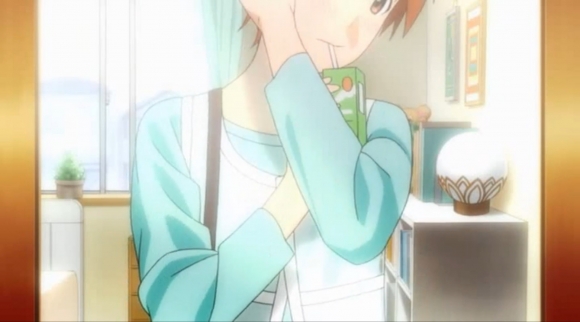 Who, whether male or female (regardless of which you identify with), hasn’t spent a few extra minutes in front of a mirror before a first date. The feeling of anxiety is nigh inescapable, and the only solace to be had before the doorbell ring is the confirmation via reflection that the image seen in the mirror is at least somewhat in line with one’s own self-image. The focus on self is acute. This is why Working!! effectively slows time by closely animating Inami’s subtle motions, which are, themselves, slowed down to a level uncharacteristic of any other animation within the series. This increased attention towards the constant movement of her entire physical self (as opposed to just an arm or a leg) as her body shifts to and fro in the mirror portrays Inami observing herself, judging herself, with a particular degree of self-awareness. She’s hyping herself up, and the close attention, the smoothness dedicated solely here to her swaying and primping, betrays that otherwise unspoken fact. These motions would mean nothing, after all, if only given the illusion of movement. The implementation of detail here adds time, in a sense, by taking the time to get everything just right.

Similarly, this is why the scene employs a fixed camera. To Inami, there is no-one else in the world right now. Only her image matters, because it must represent who she truly is as to ensure her date sees the same: her true self (no matter how untrue that sentiment actually is in real life). Even though her mother calls Inami out of her room for a brief moment, there isn’t any cut. Inami is, in her head, focused on primping; she’s still in front of that mirror, in front of the camera, no matter where she is. Thus when she steps away from the mirror, the camera stays there. Viewers stay in her mind, which is not on her mother’s advice but on the time she should be spending getting everything just perfect for the date. The level of concentration on her own absence from the mirror is illustrated in the thrice internally blown curtain, which is subject to the same detailed animation as Inami herself, in what was previously but a static background. The blowing curtain makes Inami’s absence all the more ostensible by implicating that vacuum of presence. When she returns, the curtain settles. What’s more, Inami closes that window before she leaves and takes the camera, her presence, with her as the scene ends with her exit. She’s now focused on what’s ahead, not what’s within.

Wagnaria!! is streaming on Cruchyroll and available via RightStuf and Amazon.

My thanks to Evan Minto for correcting me on the the specifics behind the effects I observed regarding the animation in this scene. What I originally thought was due to increased frame rate was actually just the depiction of slower movement and more intricate animation.