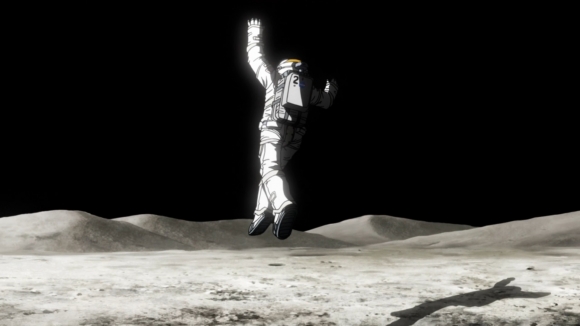 Space Brothers has been airing since April 2012, and this Snapshot, which deals with a moment in Episode 91, also includes spoilers that relate to various earlier episodes in the series. So before you read this entry, catch up on Space Brothers and then come back!

I'd like to offer a deep and sustained bow for the lateness of this snapshot to our readers. Without further ado:

Hibito’s elongated utterance of “Yay” upon stepping onto and bounding about the moon’s surface for the first time is innocently laughable in all the right ways. His exclamation—a direct contrast to and super-simplified parallel of Neil Armstrong’s reserved, historically poeticized remark—is a whole-hearted, celebratory expression of joy that comes to be exploited and popularized by his parent nation via what’s meant to be an inspirational piece of propaganda: a children’s cartoon character’s catch phrase. How better to evoke such pride than through a medium whose nomenclature is synonymous with the island nation? 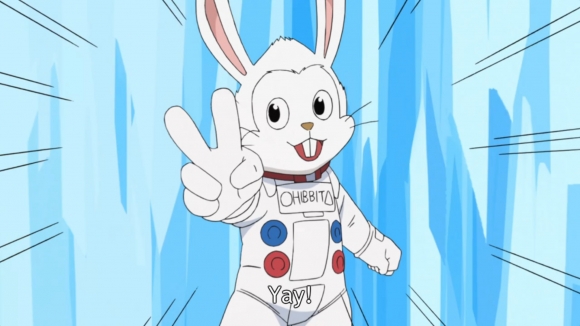 On the meta level, however, it’s important to note that Hibito, representing the real world, is embarrassed over the anime version of himself – ashamed in part for his own uninhibited remark or more to the point how its goofiness seemingly asked to be taken advantage of by such a medium. That medium, mind you, is what allows for the presentation of Space Brothers – a rather serious drama. The direct contrast lends a nice commentary to the use of anime not only in terms of topics but perhaps of targeted audiences as well. This might seem a stretch as a thesis hinged upon a singular scene, but this sentiment is not stand-alone. 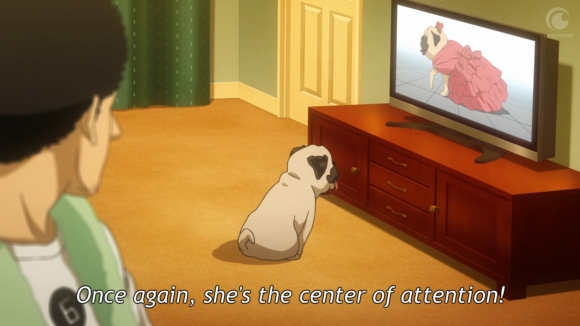 Many, many episodes later, Hibito’s older brother Mutta looks at a TV that’s been left on and is currently running an anime called “Pretty Dog” (usually abbreviated as PD). The content of the show is inane—still captivating enough to enthrall the Nanba brothers’ dog Apo—and makes Mutta remark disparagingly, “Seriously…. We’ve reached the point where a pug can be an anime main character.” But all’s not so critical. This particular anime-within-an-anime actually ends up helping the “real world” via its absurdity.

Whilst trapped underwater in a seemingly malfunctioning spacesuit, sometimes it’s the simple things in life – those moments where the scale of the heart, sung in all its utter exuberance – defeat those rare but seemingly infinite instances entertained within the vicious steel teeth of memory wherein the deafening roars of the fearsome world surrounding a first-person tunnel perspective cave in like so much a collapsing coffin. Sometimes those invigorating breaths of fresh air come from the support of friends, from family, from … anime? 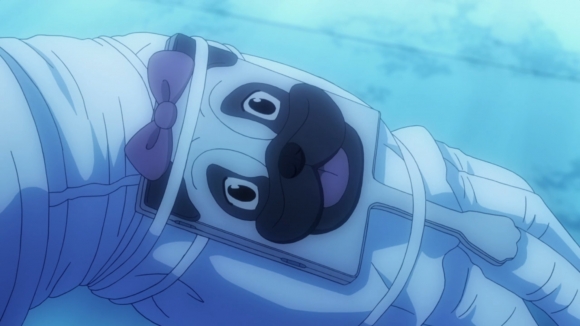 After Hibito’s incident on the moon, he’s legitimately horrified. Donning a space suit, hell getting into a cab, is near impossible for him unless he wants to relive the event and suffer the resulting panic attack. After he’s diagnosed with panic disorder (PD), Hibito undergoes rehabilitation to help him overcome his trauma. Little by little and always in secret from family and NASA/JAXA, friends old and new help Hibito along his fragile road to recovery. Soon a special test is scheduled to reevaluate if Hibito is healthy enough to return to space (he’d since been desk-jockeyed as “Safety Supervisor”).

As test day draws near and Hibito’s friends realize he still hasn’t told Mutta, they urge Hibito to do so. During a meeting between brothers, some drinking occurs and Hibito eventually gets around to mentioning his PD attacks. Mistaking this mention for the anime of which he caught a glimpse earlier, Mutta innocently asks if that’s what he means. Levity enters via the misunderstanding, and Mutta manages, by correlating the two, to turn Pretty Dog into a mnemonic device to help his brother literally laugh off attacks brought on by PD. 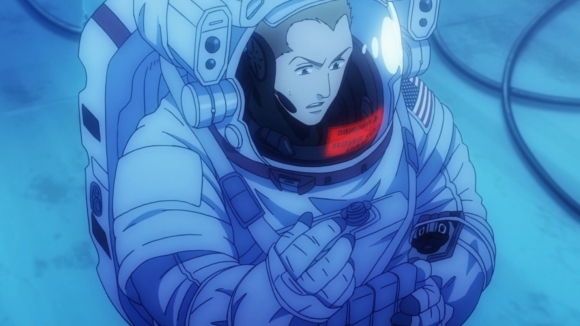 Sorry for all the summarization and background, but the silliness of anime being used to help overcome a monumental hurdle is this month’s snapshot: during his underwater test, a green card (a falsified malfunction issued by those administering the test to gauge the participant’s capabilities under stress) comes up and induces a panic attack. Relief is just a glimpse away, however, since Mutta remembers something else from his childhood with Hibito and sends along a gift of a Pretty Dog hand mirror.

Strapped to Hibito’s space suit during the test by his friends, this bit of anime merchandise not only mirrors a moment of aligning perspective in the past but it also links a bit of advice Mutta drunkenly proffers during that aforementioned night at the bar (to associate PD (panic disorder) with PD (pretty dog)). It’s anime saving anime! The “yay” resulting from Hibito’s regained composure is not one originating from the fictional world of Space Brothers but rather an outpouring of relief from the hearts of all the viewers who’ve invested themselves in the fictional struggle depicted therein. 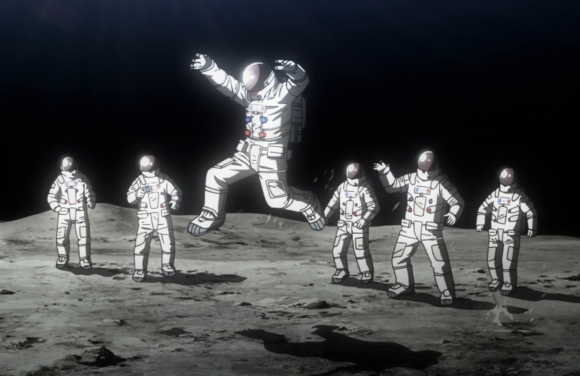