Author’s note: My subconscious had an affair with Kyoto via nostalgia appropriated from Japanese fiction. Take everything hereafter with a huge grain of salt and enjoy the speculation. 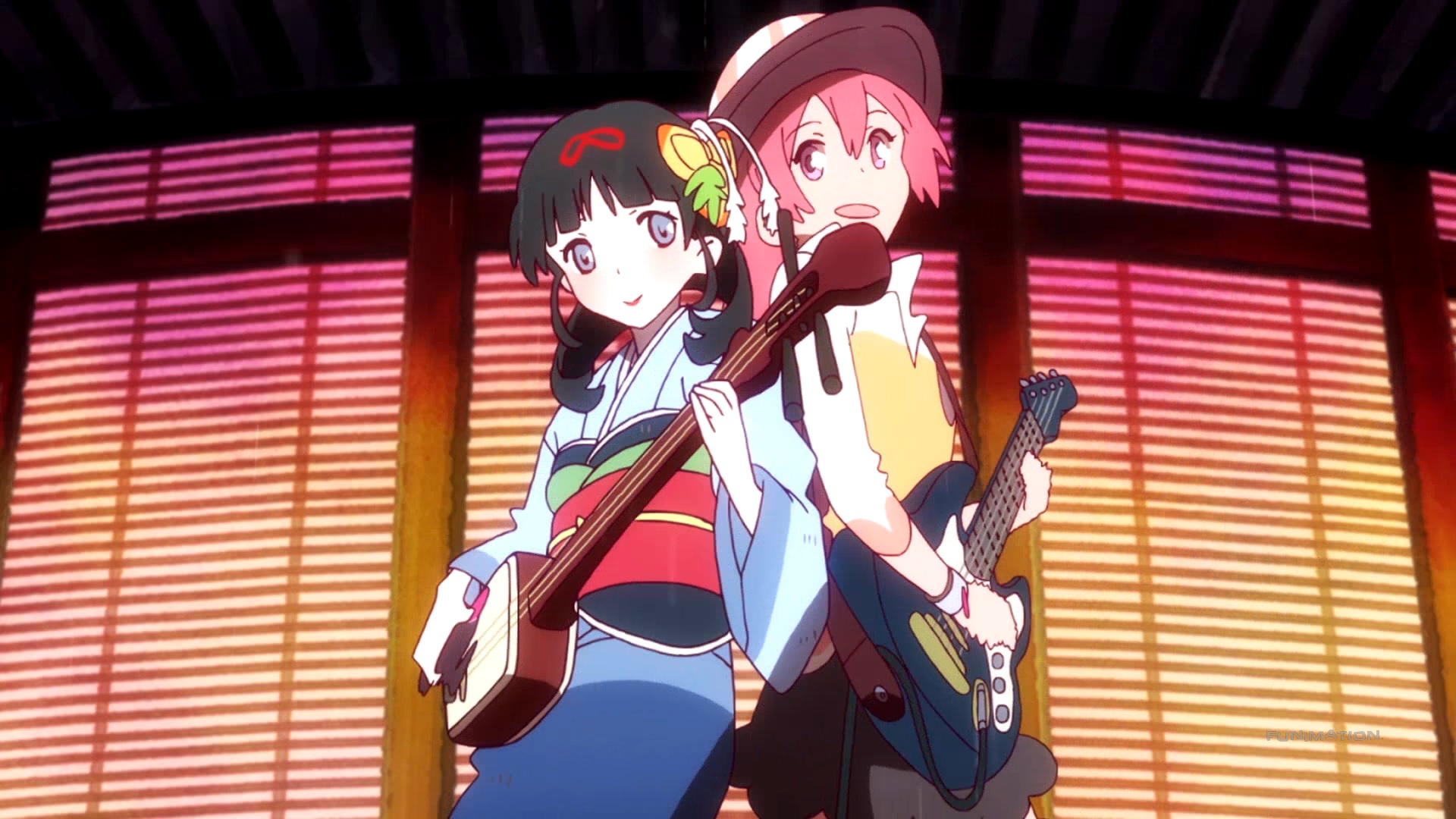 Over the course of two episodes, "Give Me the Stars" (Episode 7) and "After the Rain" (Episode 8), The Rolling Girls layers internal character and interpersonal group conflicts and then interweaves them to 1) represent Japan’s identity crisis and 2) offer a bit of optimism by way of anime’s most grandiose culture festival concert set yet.

Not to bring up the most obvious comparison in the whole nomadic-girls-with-motorcycles genre, but The Rolling Girls is at its best when it’s Kino’s Journey. That’s to say episodes focusing on a town’s or resident’s essence/conflict are infinitely more enjoyable than those focusing on any aspect of the outsiders themselves. It’s this insular focus, largely applied in Episodes 8 and 9, that enables the implication of a greater cultural identity crisis narrative as well as the finale’s emotional punch. 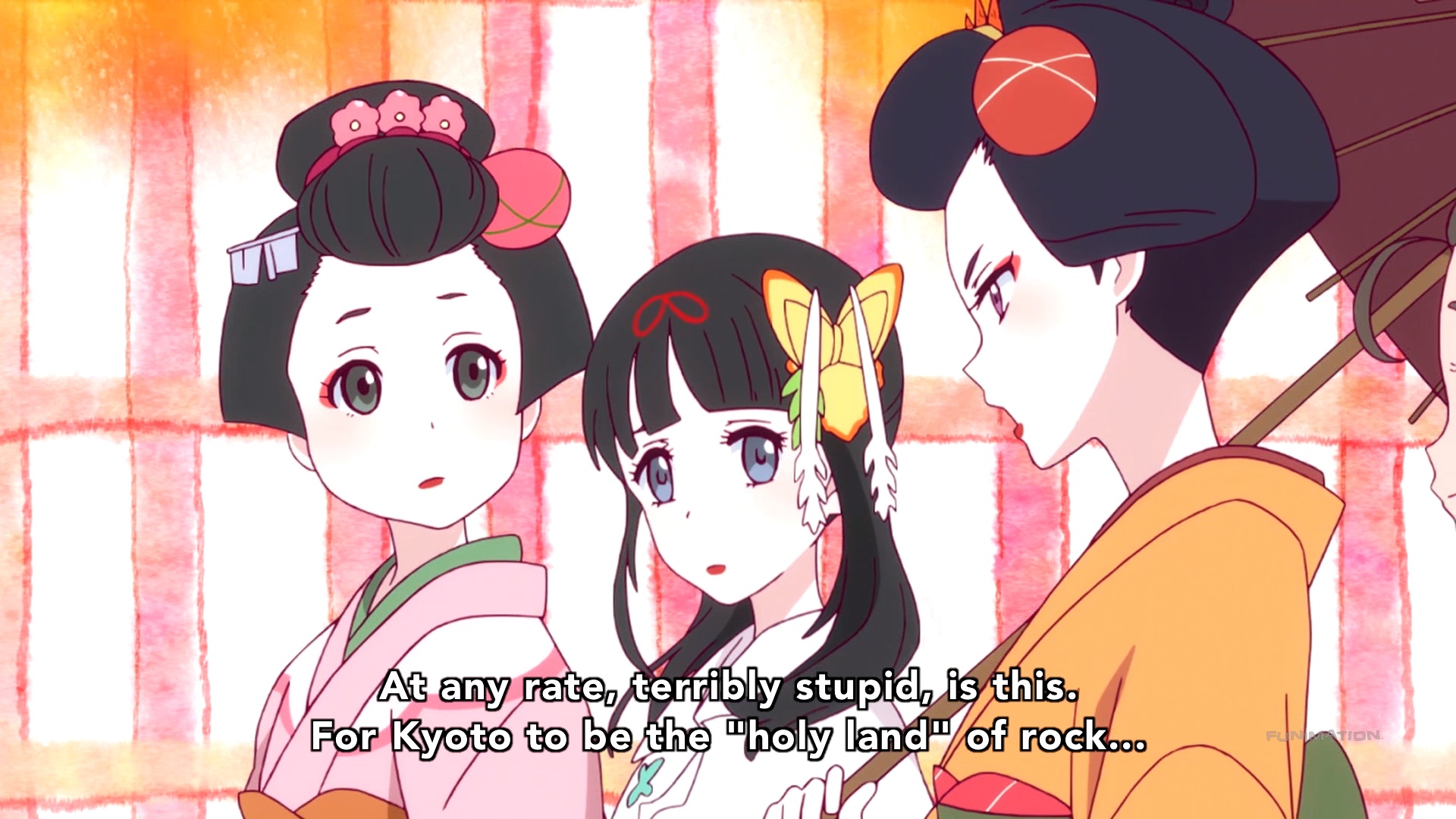 To start, the anime take place in a future post-war power vacuum which resulted in Japan splitting up into its original 10 prefectures. Each of these is represented by at least one Best—a vigilante who gains superhuman capabilities by possessing a particular kind of heart-shaped jewel—who helps resolve disputes. Episodes 8 and 9 take place in Kyoto, which was Japan’s capital city until 1869 in real life and considered by many to be the center of Japanese culture and learning. The prefecture gets the title of “The holy land of rock” in The Rolling Girls, however, due to its recent renown as a concert festival destination. 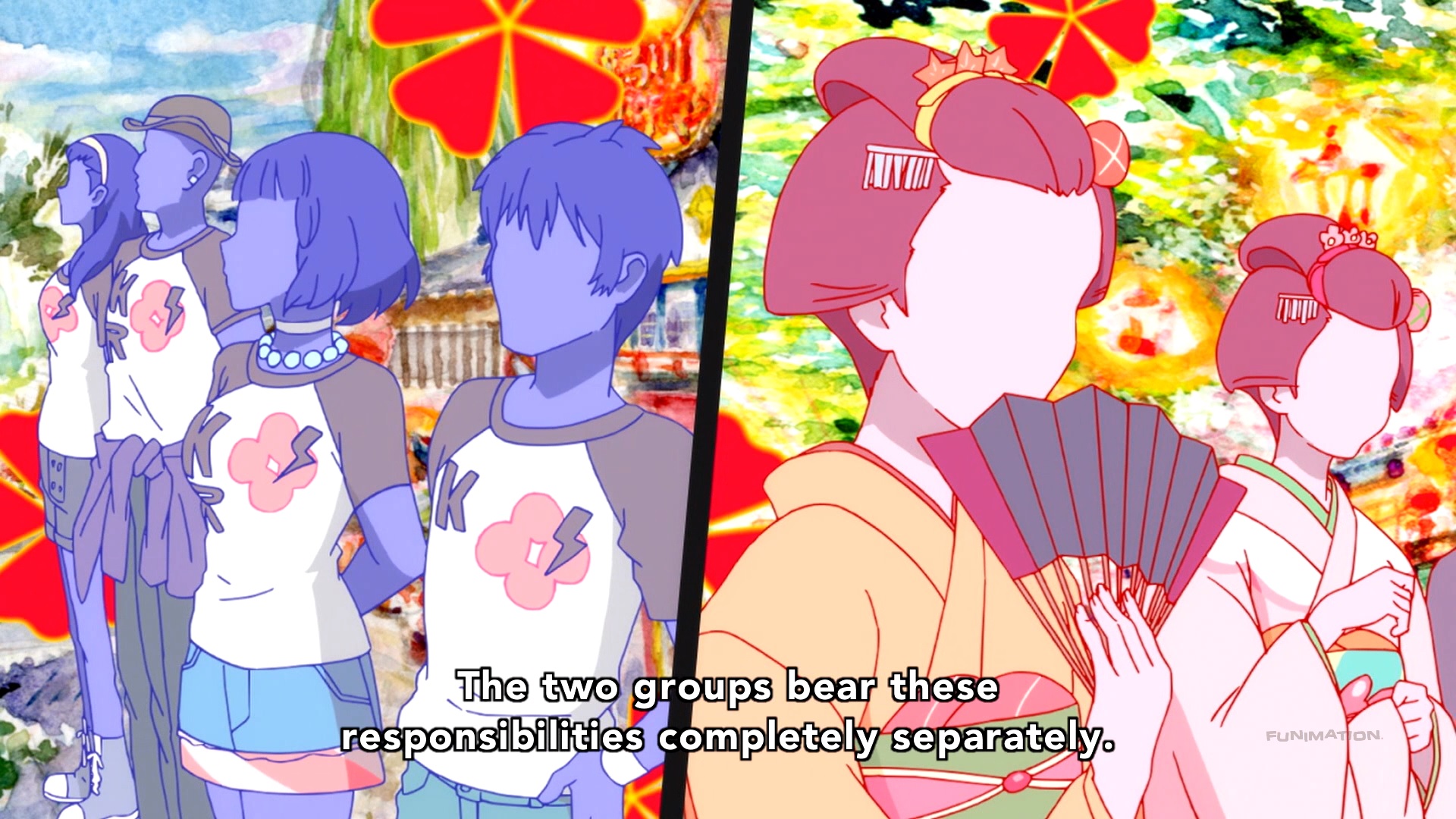 There are two Bests who manage the entire territory together with an acknowledged, unspoken agreement. Mamechiyo is part of “Maikos, We Are,” a group of geishas-in-training that protect the public peace of the general city and surrounding areas. She and her group represent history and culture—the old ways. The Kamogawa Rockers, headed by their captain Misa (a guitar player and vocalist), operate and police the huge concerts held at the old temples. She and her group represent a culture of youth fawning over and adopting foreign culture. (Japan, like the USA, has an extended history of such syncretism.) So immediately there is one group dedicated to protecting tradition and another dedicated to assimilation. 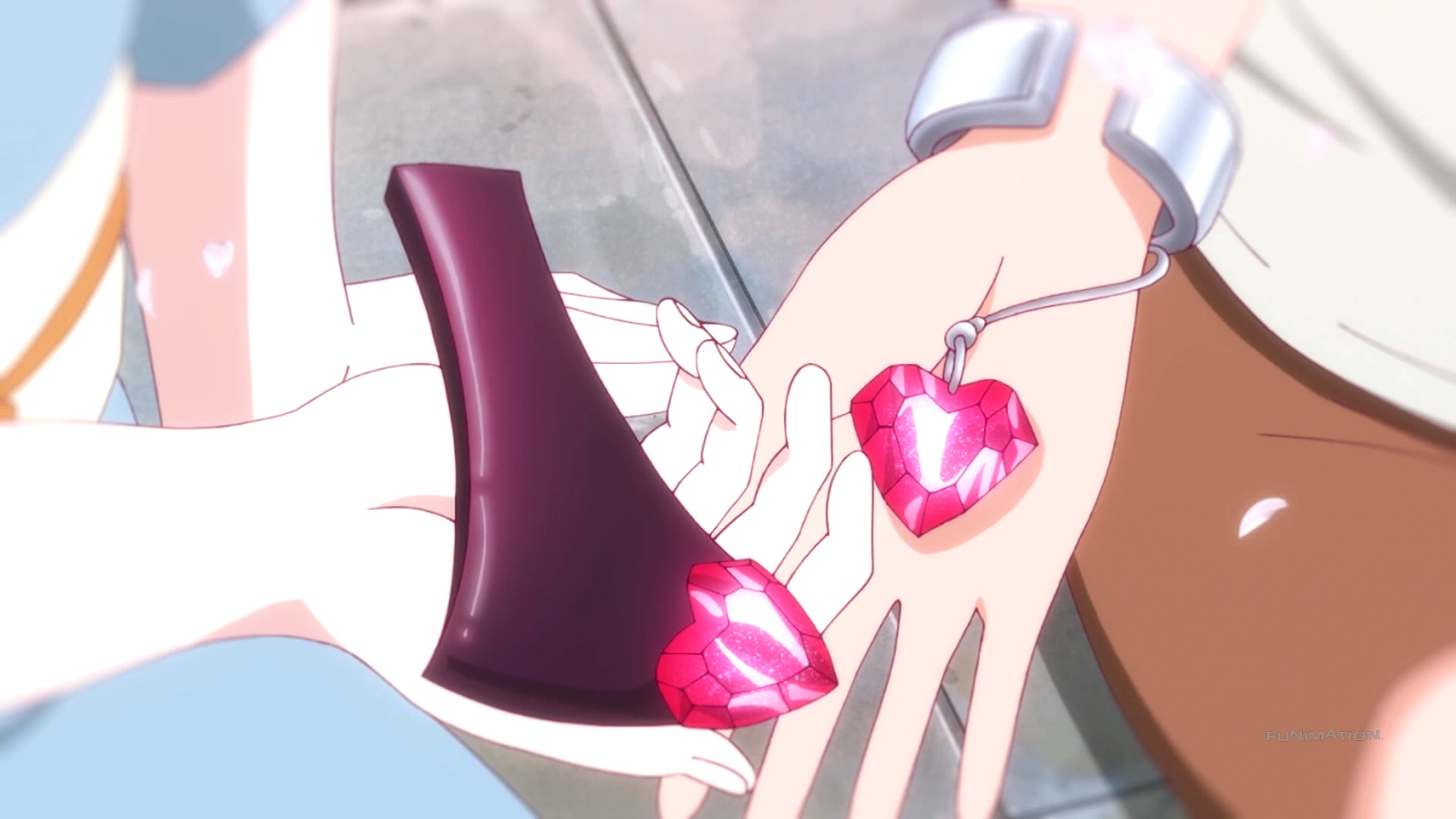 The two captains do not get along even though they once played guitars together with such strength of friendship as to summon a power stone, which they split in two (thus becoming Bests). Misa refuses to speak to Mamechiyo, who is said to have a history of “weird harassment” (stalking), and Mamechiyo is carrying, unbeknownst to Misa, a grudge. The latter is emotional baggage stemming from Misa’s success at a music competition and her subsequent shunning of Chiyo. So here is a personal division paralleling the group division noted above. For a generational twist on the same theme, you could easily apply the mantle of Old Japan to Chiyo’s mother. 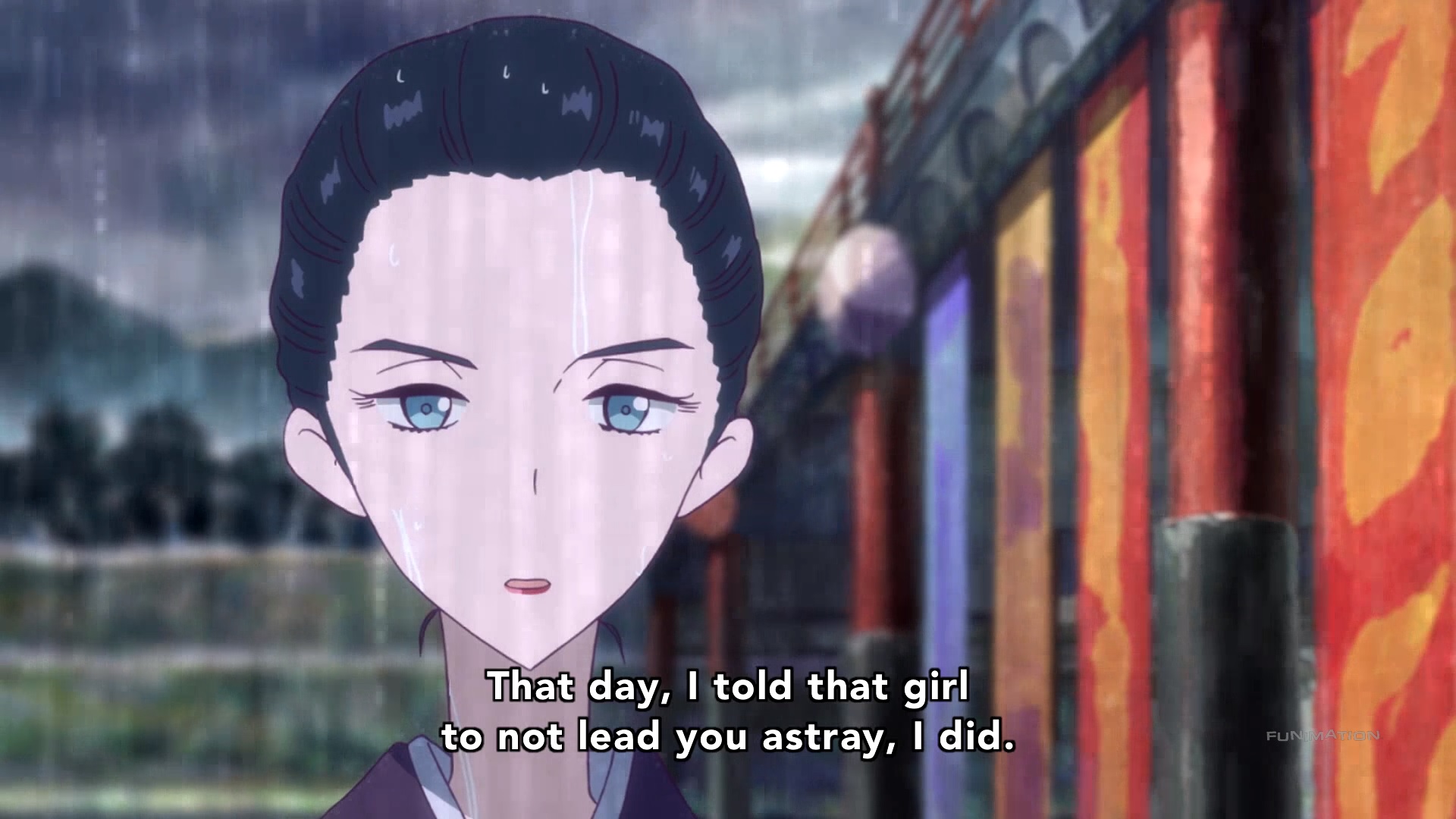 On the day of the divisional concert, Chiyo’s mother steps in to ward Misa off of distracting Chiyo from her geisha studies (fan dancing, shamisen playing, etc.). This happens when Chiyo is not around to protest, and Misa backs off entirely (thus her constant snubbing). Old Japan (mom) does not want formative Present Day Japan (Chiyo) to be tainted with pop culture (Misa) … at least not until the old culture is thoroughly embedded (and by then, dominant). But the Bests and their blood relations are not all that’s instrumental to the emotional punch of the finale. 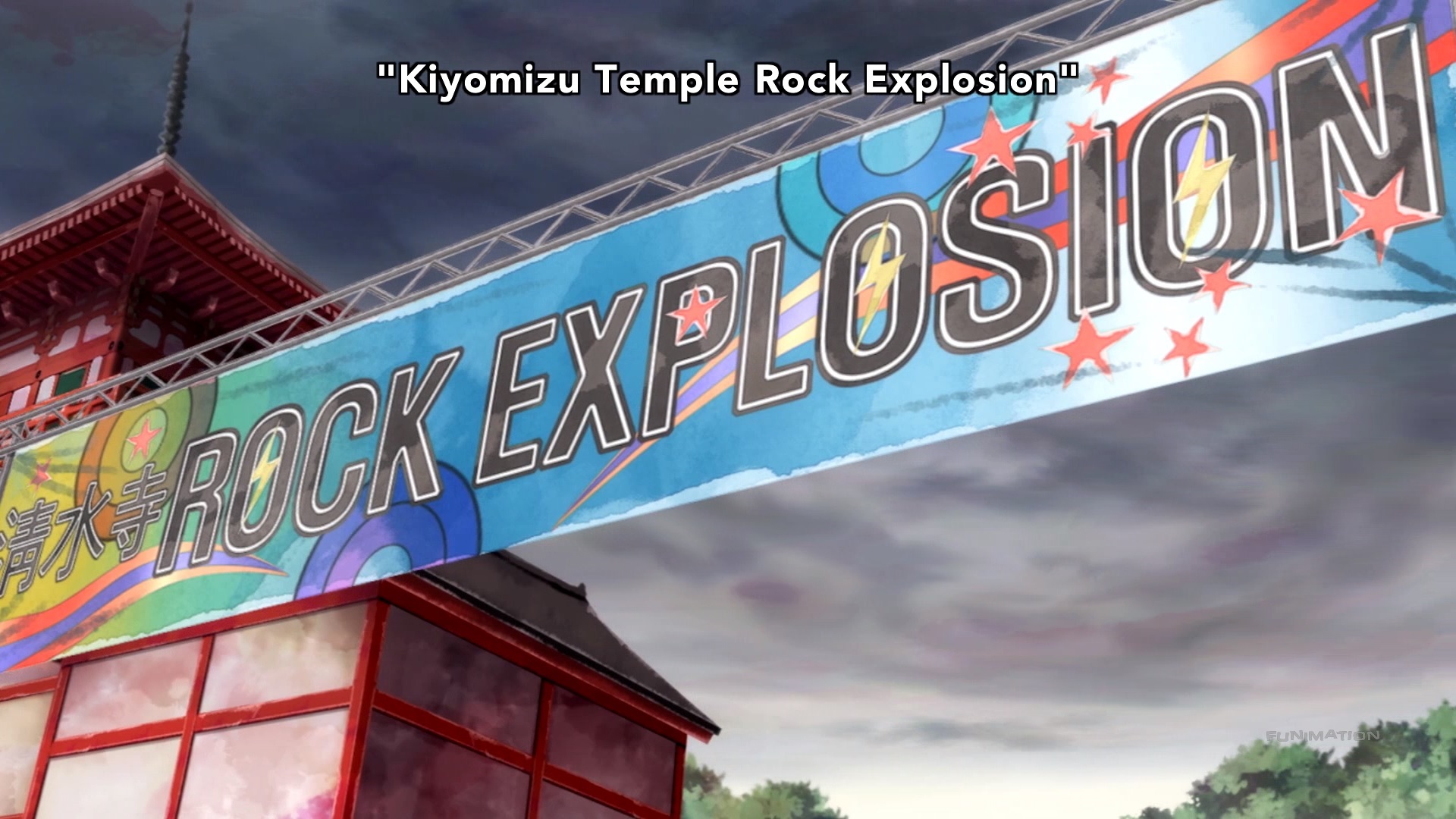 The titular traveling troupe of Best substitutes—none have special powers but are fulfilling requests for their injured Best—comes to Kyoto to save a concert, the “Kiyomizu Temple Rock Explosion” (even the name of the concert is syncretic; the show makes a point of having one of the rolling girls struggle with the pronunciation of the English). The big draw to said concert? The Momiage Hammers, an old and beloved rock band that lost its lead singer over eccentric differences, will be playing together again with local favorite Misa filling is as their lead singer. This is where things start to turn from restrictive to inclusive as old is blended with new in a positive, non-divisive context. After all, the syncretic name of the concert would instantly be divisive to traditionalists. 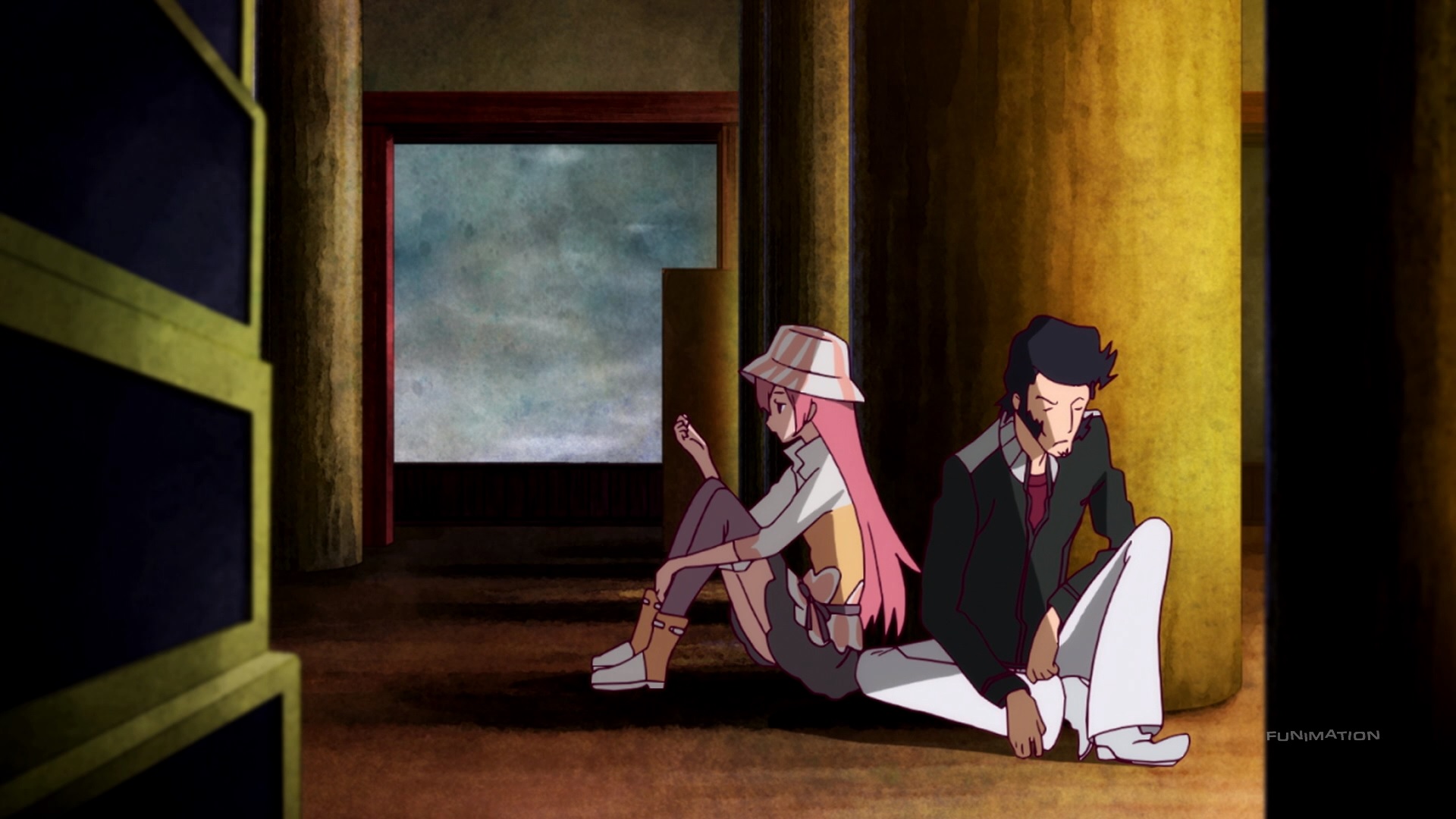 Misa practices with The Momiage Hammers, and all seems well. Misa turns out to be the life-blood the band needs to reach a younger generation, and practice sessions go great. (A parallel fourth-wall breaking layer in this is that The Rolling Girls voice actresses cover the songs of an ‘80s punk band, The Blue Hearts, exposing younger anime viewers to older punk rock.) But come time for the final concert, Misa’s without her Halved heart stone she uses as a guitar pick and freezes on stage despite an earlier tender scene where one of the Momiage Hammers sympathizes and lends her his pick. As opposed to the older generation trying to push pop culture away, as is the case with Chiyo’s mother and Misa, this sympatheic gesture shows a member of the older generation trying to help someone younger with compassion instead of regulation. 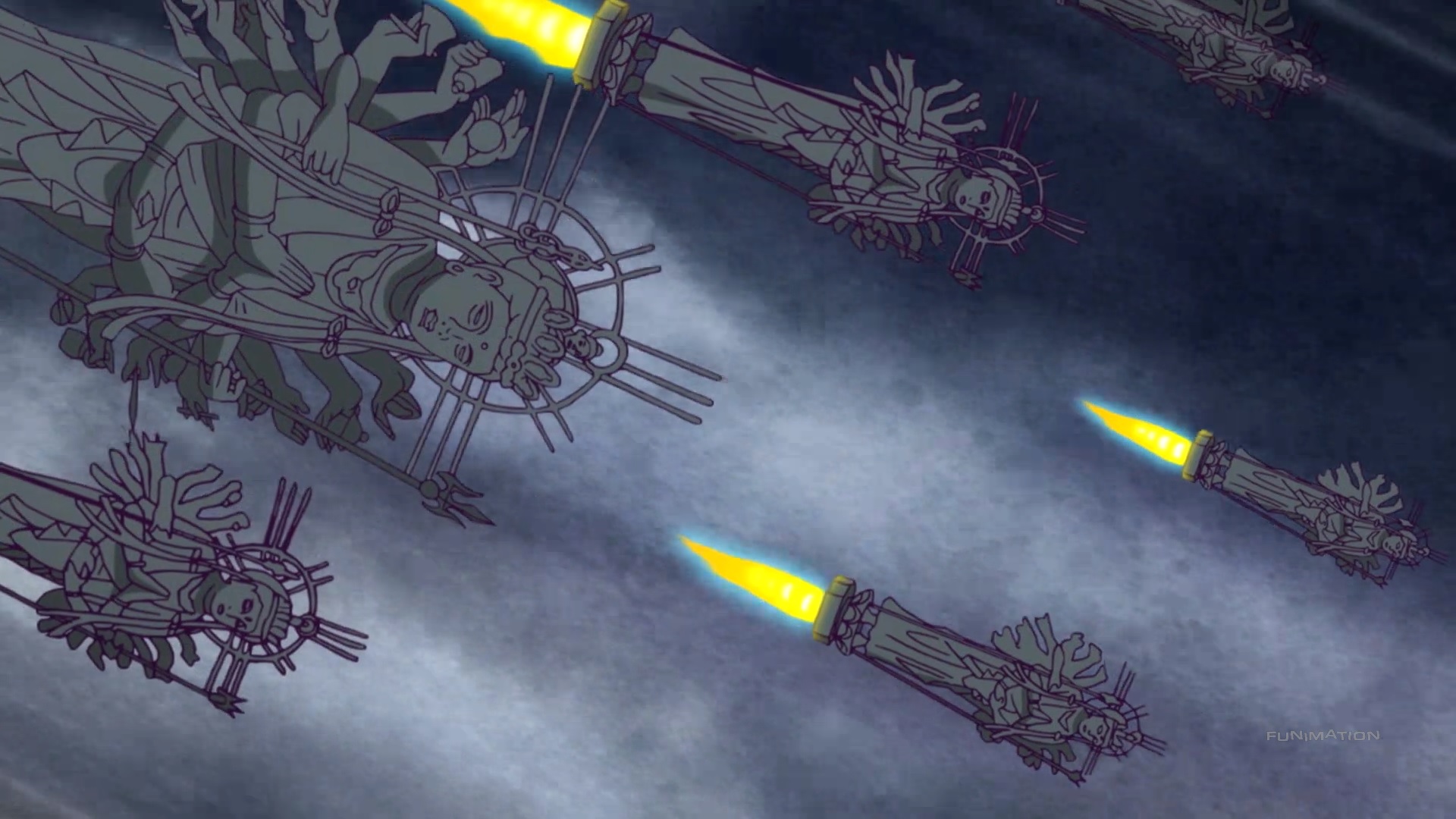 And finally there’s Doji Shuten. He’s under orders to “make things interesting” so Chiyo can have an excuse to come to the aid of her former friend and current co-Best. Shuten is modern Japan and represents the chaos of culture clash; he turns a temple-full of Buddha statues into launch-able missiles (taboo of treading on/messing with holy ground) but is presented as more Puck-ish for doing so, always wears more classic garb, and refuses to let anyone be put in real harms way. On top of his technical prowess, there’s something very anime about him in the final segment, which again points towards pop culture.

All of this, all of these characters and all of these issues, are resolved — via glances, punches, artillery laser light shows, duets, and more — in the final four minutes comprising the big, Misa-led Momiage Hammers set. It’s the younger generation literally blowing tradition out of the sky and showing backbone by bellowing at the iceberg before the boat while barreling ahead full throttle. It’s the older generation recognizing if not respecting that strength of character and fortitude and granting a nod of acceptance. It's this month's (make-up for last month's missing) Snapshot. But, mostly, it’s a party, and EVERYONE is invited.