Mad Bull 34 is a series of OVAs that focuses on namesake John “Sleepy” Estes (Mad Bull), a hulk of a street cop in New York's 34th Precinct with a heart of gold (and a prostitution ring), and his adventures with recent transfer student rookie cop Daizaburo “Eddie” Ban. In the second Mad Bull 34 OVA, Manhattan Connection, Daizaburo becomes smitten with detective Perrine Valley, who basically hands him the collar for crook he’s been chasing. After squeezing information out of that dealer about an incoming shipment of drugs, an elaborate plan is concocted to nab the criminals at the docks. But the operation, like love, gets complicated (and weird).

Pinned down atop a nearby rooftop, Daizaburo and Sleepy accidently attract the attention and fire of the matching trench coat-wearing, drug-running mob, while Perrine and officer-in-charge Lieutenant Tom DeMiyer attempt to get the goods. DeMiyer creates a diversion by exposing Perrine’s position and flees with the evidence. The remaining team is split in twain by bad guys firing in each direction, but all that’s left to do is get away. So what’s a cop to do? The only answer for Sleepy, of course, is to drop trou. Amidst a flurry of flying bullets, this may not seem like the wisest of tactical (or personal) decisions, but Sleepy and Daizaburo hold the high ground and have a surprise. 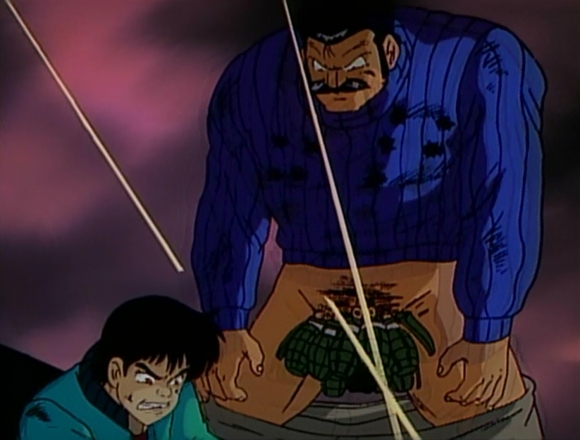 Forever an innovator of police tactics, Sleepy comes prepared with some unexpected armaments. He’s concealed, in his pants, a bushel of hand grenades—each bow tied to and by his pubic hair. This merkin’s fashionable AND practical! After seeing Sleepy yank one grenade off and toss it at the gunmen, Daizaburo’s shocked. But upon seeing a lock of hair from his lady fair clipped by a speeding bullet, Daizaburo loses his cool and causes Sleepy to lose some pubes. A man possessed, Daizaburo plucks and lobs grenade after grenade into the dividing sea of ne’er-do-wells. This is also one of the very few (if not only) times Sleepy sheds tears. 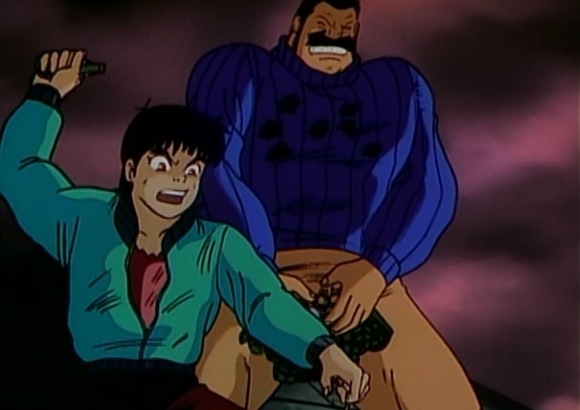 True to the ol' Anime Network definition of anime as “totally unexpected,” Sleepy’s stash of gra-nads, if you’ll pardon the pun, comes out of left field in two ways. First and most obvious: the dude’s totally toting grenades around on his pubes! Second, and possibly even more hilarious, consider the fact that those same grenades could’ve just as easily been carried in a duffle bag since Sleepy and Daizaburo were just intended as lookouts from the get-go. Mad Bull 34 is great at layering shock value for larger laughs, and compounding the obscenity of the aforementioned scenario with something as simple as the realistic reaction of having Sleepy shed a tear from hair being torn from such a sensitive area results in pure comedy gold.