Syncretism is a mainstay of Japanese culture. Movies, music, spirituality, and more from other countries are often adapted to complement modern life—the culmination of a long history rife with imagination and ingenuity. But Japan is certainly not alone in doing this. Folktales from cultures in every nook and cranny of the globe have been passed down for generations via oral tradition (and later in written collections). It's only natural that those same stories, upon spreading beyond their local and regional boarders via the likes of intrigued traders and passing travelers, change just as much due to the laws of a game of telephone as to adapt to slightly askew or dissimilar cultural value sets. Folktales from Japan (Furusato Saisei Nippon no Mukashi Banashi) is a series that focuses on folktales from Japan. While watching one such tale (“The Six Warriors”), my jaw dropped when I recognized parallels with a British movie about a certain German nobleman and infamous tall tale teller.

“The Six Warriors” (third tale, episode 114) involves a young warrior who wanders around inviting interesting people he meets en route to travel with him. He meets a man with superhuman strength, a man with superhuman speed, a man with superhuman eyesight, a man with a talent for blowing his nose, and a superb marksman. Separately, these types of characters are quite common in folktales. But the description of the young warrior as “a bit weird,” combined with the introduction of all of those types of characters, rang a bell.[1] Along their travels, this group comes upon a lord’s palace where a challenge is issued. Someone from the group must beat the lord’s daughter, the princess, in a race to a far-off spring, fetch some water, and bring it back. Again, whistles sounded in my head.[2] But when the man with superhuman speed fell asleep under a tree only to be espied by his travelling companion with superhuman sight and awoken by the effects of the superb marksman, I knew this was Terry Gilliam's The Adventures of Baron Münchausen. 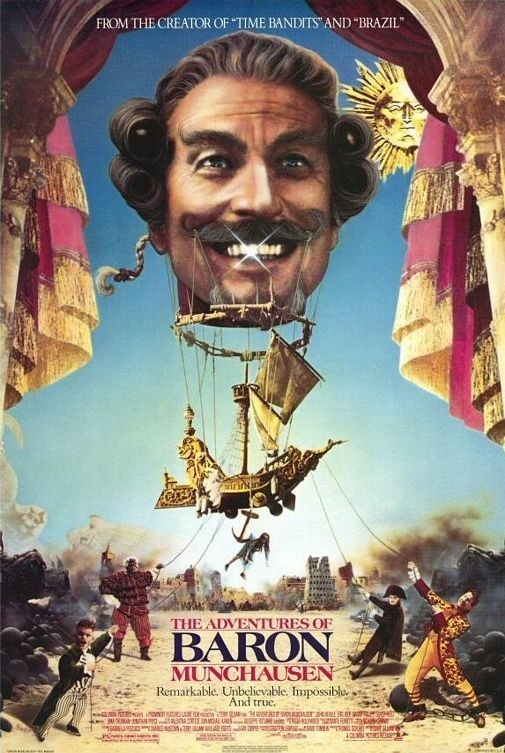 Trouble is that I didn’t immediately have the historical background with which to discern which came first, “The Six Warriors” or an actual tale about the real-life baron that Gilliam wove in his movie. After all, Münchausen was a real man, a historical figure, who took part in the Russo-Turkish War. My head spun! The spread of his tales eastward or his absorption of tales heard from the west while fighting abroad were both plausible scenarios. A quick trip to Wikipedia town revealed that the first published stories collected about Münchausen (first by an anonymous third party and then translated into English and published by Rudolf Erich Raspe) “are based on folktales that had been in circulation for many centuries before Münchhausen's birth” (italics mine). So it looks like, in fact, one of the tales in Gilliam’s movie stems from a Japanese folktale! The differences[3] revealed by the East to West adaptation are pretty fun to examine; read on for the breakdown. Otherwise, marvel in the discovery of where one scene in a phenomenal British film indirectly gets its inspiration: a tale told to toddlers.

Although snapshots are generally brief affairs, and that "Ah-HA!" moment has already been described, I'd feel remiss if I didn't fully explain why my jaw dropped by examining all the differences between the tales. So please forgive the unusual length of this particular snapshot or just consider it a stitched-together, panoramic one.

Baron Münchausen (Hieronymus Karl Friedrich Baron von Münchhausen) is ascribed to the role of the unnamed young warrior in the Japanese folktale. Both wield a sword as their primary weapon but seldom do any fighting themselves—commanding their companions’ talents instead.

Albrecht was the name given to the unnamed strong guy in the Japanese folktale. The only obvious change is cosmetic: Albrecht is played by Winston Dennis, a dark-skinned actor (African-English?), whereas the anime character is, most likely, Japanese.

Berthold was the equivalent of Idaten from the Japanese folktale. Both were super fast, but Berthold had the addition of self-applied ball chain shackles he wore when not running in order to slow himself down. (The implications on self restraint and lack thereof can be argued.)

Adolphus is an interesting amalgamation of the man with superhuman eyesight (Senrigan) and the rifleman ("straw hat") from the Japanese folktale.

Gustavus creates massive gusts of wind by blowing through his mouth, while Hanafuki (from the Japanese folktale) blew through his nose. Hey, ya gotta keep the children entertained. Also, Hanafuki gained two HUGE ears as Gustavus for feats of superhuman hearing in the Gilliam flick. I’m guessing this was done to compensate for the aforementioned amalgamation that subtracted an entire member with distinct capability from the cast.

Speaking of, that leaves five warriors on Gilliam’s Münchausen bill. Where’s the sixth? That’s the baron’s trusty steed, Bucephalus (not in the Japanese folktale), who comes at a whistle no matter what obstacles lie between him and Baron Münchausen.

In The Adventures of Baron von Münchausen, the baron tells the tale of a wager he proposed while in the Sultan's palace. The wager was that the baron could procure, “within the hour,” a wine far superior to the sultan’s favorite directly from Vienna or else the Sultan could have the baron's head as a trophy.

In The Six Warriors, the young warrior and his group travel past a lord’s house. There is a mandatory challenge imposed upon all who pass: win a race or fork over all valuables. The race requires on challenger to beat the princess down to a spring three leagues away, fill a pitcher of water from that spring, and bring it back.

The baron sends for Berthold, who runs there, procures the bottle of wine, and sprints most of the way back but ends up falling asleep under a tree.

The young warrior sends Idaten, who runs there, fills the jug, and runs partly back but falls asleep under a tree after he sees what a huge lead he has on the princess.

Down to the last few minutes, the baron begins to worry and gets his team to use their distinct capabilities to find out what happened. Gustavus presses his large ears to the ground and hears Berthold’s snoring. Adolphus, boosted up on a rampart by Albrecht, espies the slumbering companion and shoots an apple off the branch under which he’s dosing. Awoken, Berthold makes it back in the nick of time.

Senrigan’s up in a tree or on a vine watching the race and alerts his friends to the fact that Idaten’s been overtaken by the princess, who also knocked over Idaten’s jug, while he was asleep. Straw Hat’s ordered to show his stuff. He shoots off the branch of the tree Idaten’s sleeping under and wakes him. Idaten goes back to the spring, refills the jug, and beats out the princess in a photo finish.

The sultan indeed finds the wine superior, and being a man of his word, lets the baron take “all the treasure the strongest man can carry.” Upon hearing that Albrecht hoisted the entire contents of the sultan’s treasury upon his massive back, however, the sultan sends forth an army to deal with the baron’s eclectic group. The troups are quickly defeated due to a few mighty blows by Gustavus and some minor contributions by the rest of the group. 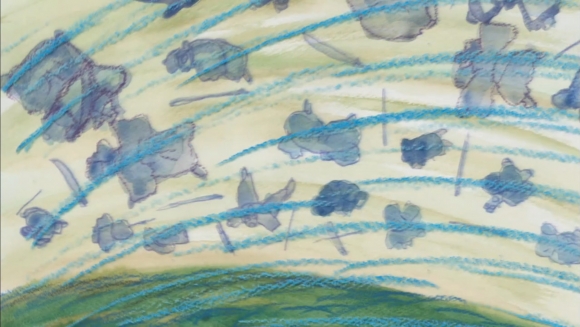 Despite cheating, the lord concedes that Idaten won and allows the young warrior’s group to take all the treasure the strongest man can carry. Upon noticing the strong man in the group had lifted the all of the treasury, the lord orders his troops to attack the group of eclectics. The army, the sultan, and the princess are quickly defeated by a couple hefty blows from Hanafuki.

Later in the movie, upon catching up with Albrecht, it’s revealed that he alone kept the treasure and ended up giving it all away to charity.

After bankrupting the court, the young warrior’s team hands over the riches to the village that had suffered under the greedy lord.

The challenge highlighted in The Adventures of Baron von Münchausen is one of man vs. time, which is a prevailing theme of the movie. (The baron’s constantly facing his own death.) When invigorated by such adventure, the baron takes on a visibly youthful appearance, and the tone of the action as well as the baron’s actions are those rooted in arrogance and selfishness. Neither of these are ever painted in a bad light.

The mandated challenge in the folktale is man vs. man—a representation of a prevailing moral of most of the tales in Folktales from Japan: the oppressive nature of the greedy vs. the selflessness of the just. Not only is the lord a deceiver by having a hidden ace up his sleeve (the princess is, like Idaten, endowed with superhuman speed), but his child also cheats during the contest. Deplorable actions meet a compounded just end: the rich lord loses all his wealth and is then for all intents and purposes banished from his land. 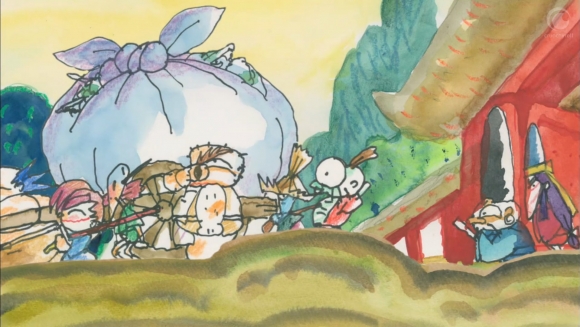 Whereas the Japanese folktale is about using everyone's special ability as a team to overcome the oppressive greed of the local lord in order to help his poor villagers, the movie is about the baron using the skills of each of his “servants” to acquire bragging rights and just for the general thrill of popping an inflated ego (be it general disbelief or classic narcissism). It should be noted that the sultan is portrayed as casually enjoying the suffering of his people, while the folktale casually implies the young warrior can’t resist besting someone at a challenge.

Both of the main protagonists are depicted as wandering adventurers. While the Japanese folk tale defines its protagonist, politely and reverently, not by name but as a ronin on "a journey to win fame and glory," Münchausen is depicted more or less as a fool—a child, a leaf amidst the winds of fantastic circumstances—whose fame is not so much sought but stumbled upon. This is a contrast of sense of duty towards self and others and the selfishness of Romanticism. Echoes of this contrast can be seen in all the above mentioned instances and descriptions.

The beauty of this bit of syncretism is that the not so opposite sides of the same coin (tale) complement each other so perfectly it's almost a divine balance.