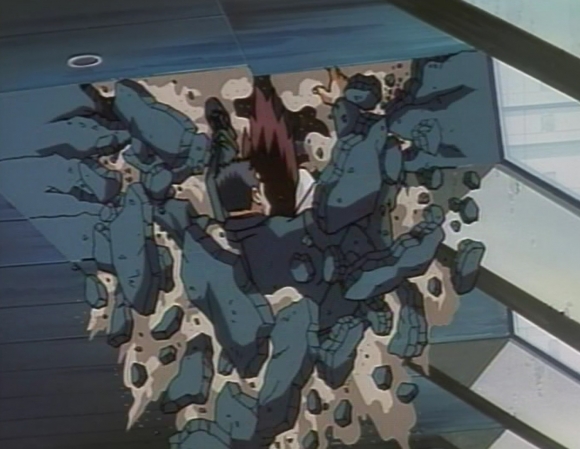 Director’s Cut material aside, Yasuomi Umetsu’s KITE is an action movie through and through (and through). Young assassin, Sawa, carries out various hits interspersed between scenes with plot points advancing her revenge tale. There are gallons of blood, lots of screaming, disembodied body parts galore, excessive explosions, and some pretty swell fight choreography too. But amidst all the adrenaline is one scene with action so impossible that, intentionally or otherwise, it elicits laughs and deserves a standing OVAtion.

To set the scene: a massive explosion, one which punches a hole through the wall high up in a skyscraper, appears to clear all remaining unfriendlies from the cramped bathroom in which Sawa was fighting. As Sawa stares down at the streets below, she’s grabbed from behind by one last standing foe who then forces her off the building. They fall.

The scene:
Sawa latches onto a hefty, protruding sign. It gives way. She and the gunman clinging to her leg fall (again). During their descent, Sawa manages to crouch on top of the man and braces for inevitable impact. The pair hit the top of an enclosed bridge between buildings. They fall through, crushing the roof of a traffic-mired automobile. The force from the fall, along with the weight of Sawa, the gunman, and the upper bridge piece, makes the car fall through the asphalt and bridge base, all of which puts a serious dent in the gridlocked tanker truck directly below and makes Sawa’s momentum crush the gunman’s innards; blood and teeth erupt like a slow volcano. There's a slight pause hosting the ominous sound of cracking asphault. Then the truck starts to sink and falls through the street (and numerous layers of solid Earth) into the subway below. The concerning silence is anticlimactic; Sawa’s shown safely clinging to the side of the hole made by the tanker. Then the sign, a huge arrow pointing straight down, falls through the hole (narrowly missing Sawa) and ignites the tanker below. Sawa’s blown out and up and across the street into a building through a storefront window and onto a show bed.

Wile E. Coyote’s constant canyon falls were amusing because the character was out of sight—a speck of dust riding a slide whistle all the way down. Good ol’ Wile E. was abstracted. The cloud of smoke let viewers know when the fall stopped, and then the coyote reappeared in bandages that disappeared in the next scene. Comedy.

Homer Simpson’s infamous gorge jump in “Bart the Daredevil” is a direct and gruesome Wile E. parody. During his descent, Homer hits every extended crag and branch on his way down and gets bloodier and more tattered the further he falls. It hurts, but the scene’s comedic for using realism as a sort of hyper-aware commentary on the pain at which we laugh so lightly.

Blending aspects of both of the above scenarios, KITE takes an absurdly realistic-looking fall and endows it with a physics-defying momentum that presses the tickle button every time un-believability is compounded. Simultaneously, the progressively bloodying bad guy embeds a bit of realism and empathy. The down arrow sign falling straight through the hole and igniting everything is the punchline, the big cartoon laugh, and Sawa’s flight through the air and bed-cushioned landing are the disappearing bandages. 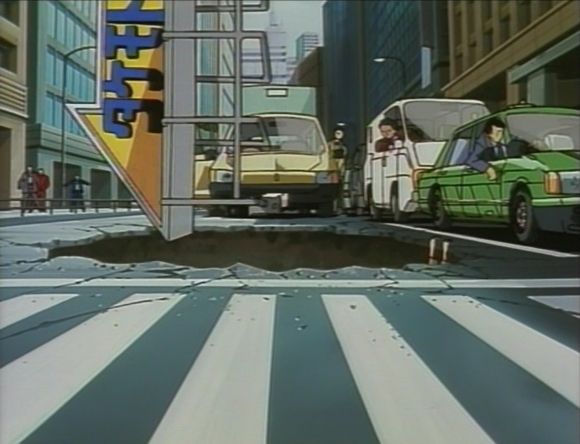 Kite is currently streaming on Netflix and available for purchase on RightStuf and Amazon.