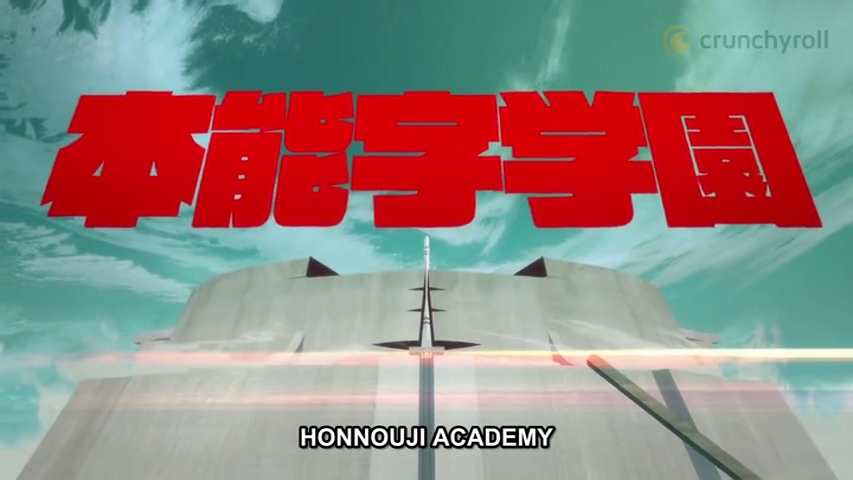 I’ve made no secret of my distaste for 3-D animation in anime (known in the industry as "3DCGI" or "3DCG"). The vast majority of 3-D work in anime ranges from “passable amateur work” to “distractingly awful,” primarily because Japanese animators seem to either lack the time or the training to create believable character and camera motions in a 3-D space. That being said, there is a surprising amount of good 3DCG work going on in anime, though it’s primarily being done not with character or mech animation, but with the often forgotten anime art form: backgrounds. Computer software is enabling animation studios to create complex moving background effects and integrate them seamlessly into scenes. 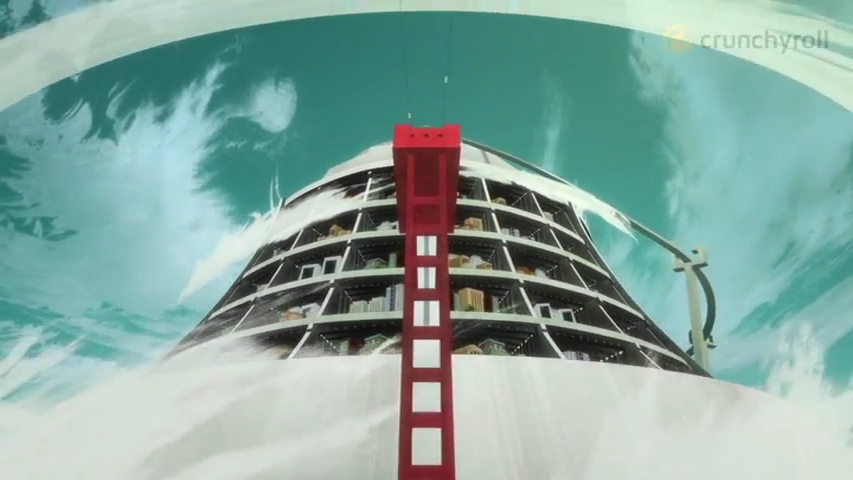 One of the bolder examples is in Kill la Kill episode 1, in which sister studios Trigger (handling Animation Production) and Sanzigen (handling 3DCG) work together to create one of my favorite shots of the series. After we’ve been introduced to the totalitarian school that is Honnouji Academy, the camera sweeps down the school’s giant hill and the surrounding town, all the way out to a bridge on the outskirts, where it zooms in and spins to show belligerent transfer student Ryuko Matoi, our hero. (The scene is around the 3:50 mark if you'd like to check it out for yourself on Daisuki or Crunchyroll.) 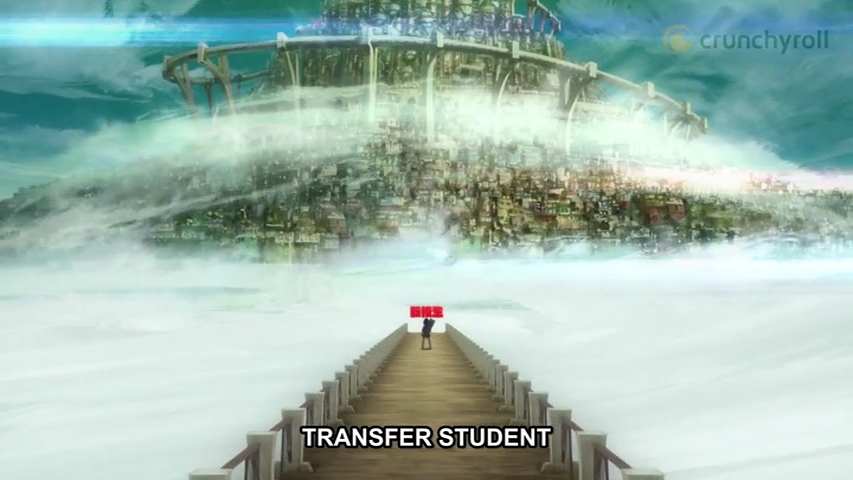 Compositionally, it’s a fantastic scene that establishes in just 30 seconds both the style (dynamic camera angles and lots of stylish effects) and substance (one girl vs. a monstrous academic regime) of Kill la Kill, but it’s the technique behind it that makes it especially cool. There’s a very clever mix of 2-D and 3-D elements in the shot that switch back and forth as appropriate. 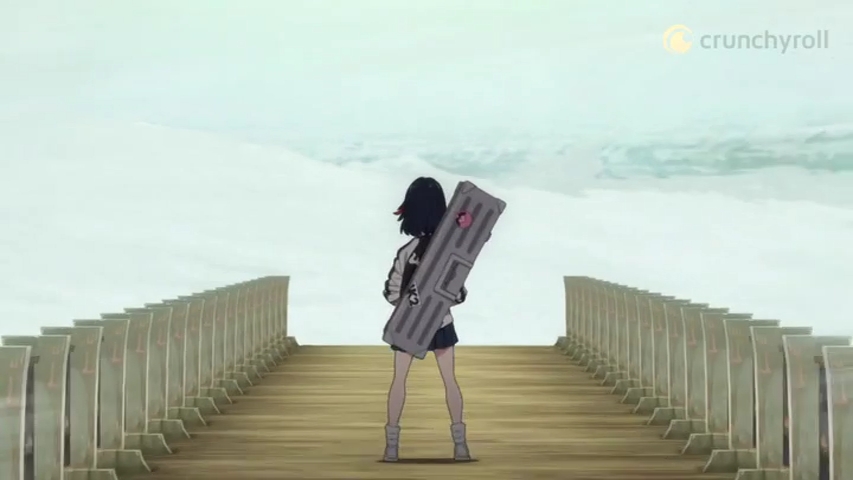 It begins with what seems to be a painted background of Honnouji’s sailor-uniform-shaped main building. However, upon close inspection, it's clear that the building is actually a 3-D model covered in painted textures that make it look like it's hand-drawn. This is a recently popularized technique that helps make 3-D backgrounds look more like their 2-D brethren (Mamoru Hosoda and Hiroshi Ohno used it to great effect in Wolf Children). Then the camera zooms out through a 3-D model of the school courtyard and walls, both of which are similarly textured. The frantic zoom continues out through the town, all of which is fully modeled and at least partially textured (some things look like they might be flat colors, but the shot is too fast to be sure). A combination of motion blur and hand-painted smoke backgrounds help obscure the model so its simplified version of Honnouji doesn’t seem inconsistent with the hand-drawn version. 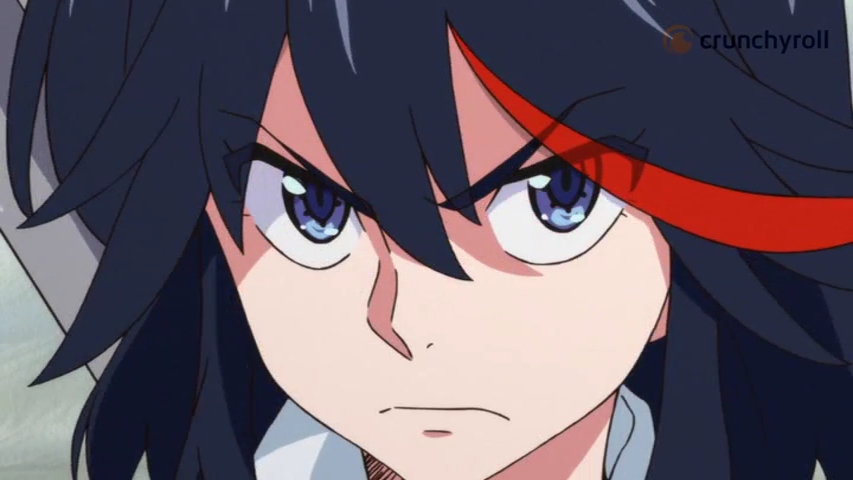 Suddenly another puff of smoke whizzes past, and the entire 3-D model has been replaced with another painting, this time of the entire hill. The movement here is subtle, but this new "painting" is actually about three or four different hand-painted planes shifting at slightly different rates to create a sense of depth.

Now fully zoomed out, with Ryuko and the bridge in view, the camera comes back in and accentuates the effect with a Vertigo shot (a.k.a. "dolly zoom"). The 3-D-modeled railing of the bridge showcases the effect, forming a classic one-point perspective image. While the 3-D camera executes a Vertigo shot, the 2-D background zooms in, and eventually the Vertigo shot breaks, giving way to a true zoom on Ryuko that ends in another Vertigo shot to balance things out. Then there’s a stealthy cut to a front-facing closeup of Ryuko to give the impression that the camera just swung around her, and a hard cut to a full-body shot. Finally, one last cut to Ryuko from the back, glaring at the ominous Honnouji Academy (now represented by a new background painting). 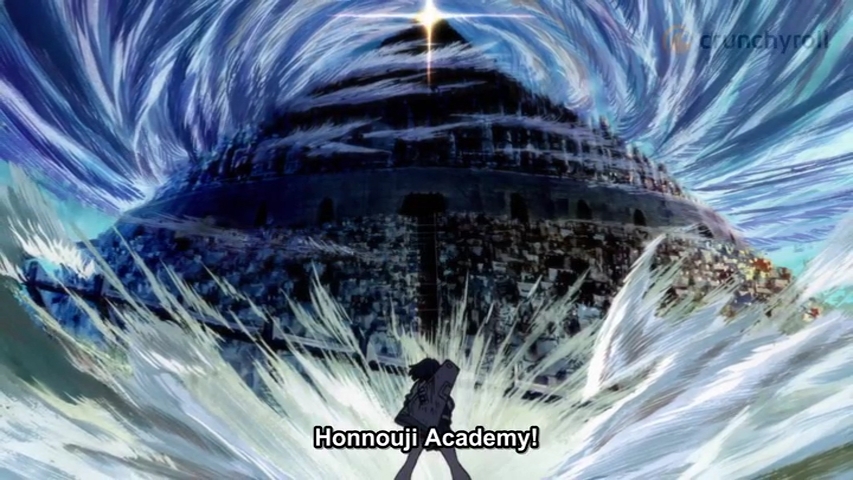 This is the kind of shot that would be very time-consuming without 3DCG, in that an animator would have to hand-draw every frame of the zoom and the shifting perspective of the Vertigo shot. With the use of computers, however, and with clever cuts that obfuscate the simplifications on both the 2-D and 3-D sides, Trigger and Sanzigen are able to make a ridiculously dynamic 3-D shot come to life and still look completely right for the look and feel of the series.

Kill la Kill is currently streaming on Crunchyroll and Daisuki.