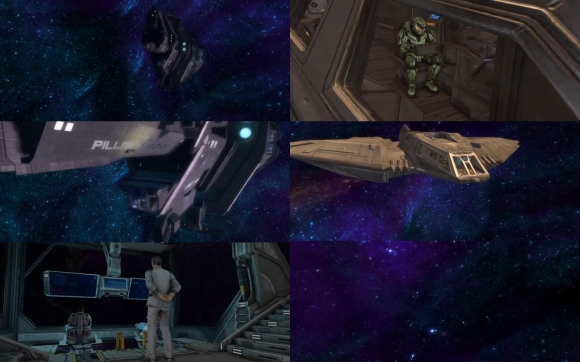 Spoiler tag in effect: I will have to assume that you have played at least one of the Halo games so please read at your own risk if you have not.

There’s a device in cinema that some filmmakers use. The theory is simple: if you want the audience to think the story has come full circle, make your last shot of the film the very same as the opening shot. No doubt people will decry the practice as being the work of lazy hacks. They are right, but then I’ve done it in my own short films, so take from that what you will. Playing Halo Anniversary for the first time, I noticed that Bungie (Halo’s creators) did the same thing. I’ve never completed a single Halo game except for ODST. With two brothers, both of whom are massive Halo fans, getting the time to finish an actual Halo game is a rare commodity. But no matter, last Tuesday I found myself at 3:00 AM finishing the first game. And as I watched the ending I noticed that it’s the opening shot in reverse.

The opening shot has the UNSC (United Nations Space Command) ship our heroes are on, the Pillar of Autmun, gliding into view after being treated to an azure starfield, unnamed and unknown, and then pans down into the window-filled bridge of the ship. Then we get dialogue and we’re away. Then you forget about it and go on with your mission and then the rest of the game. The closing shot is our heroes, the Master Chief and Cortana, together on a bomber that was used as an escape vehicle as the camera pulls of the window and glides away leaving the azure starfield in view again. I’ve included the relevant shots above.

What struck me as I watched the closing shots was how much the characters had come full circle. In the beginning, the Master Chief was facing an impossible enemy, the Covenant, who were intent on destroying humanity for whatever purpose they had decided by themselves. As the mystery of the ring world both groups find themselves on unfolds, the UNSC forces find themselves fighting to get the secret of Halo before the Covenant do. By the end of the game, the Covenant and the UNSC discover the terrible secret behind Halo and also the creatures it was built to stop, the Flood. By the end, the Master Chief has beaten both the Covenant and the Flood when he destroys Halo. Cortana remarks “It’s finished.” But in the end, the Master Chief realises that they haven’t won anything except a reprieve: the Covenant are not as invincible as they thought, but they are still around. Plus now, they face not one enemy but two. Even if they beat the Covenant, the Flood are an even bigger threat. As the Master Chief, in response to Cortana, replies:

“No. I think we’re just getting started.”