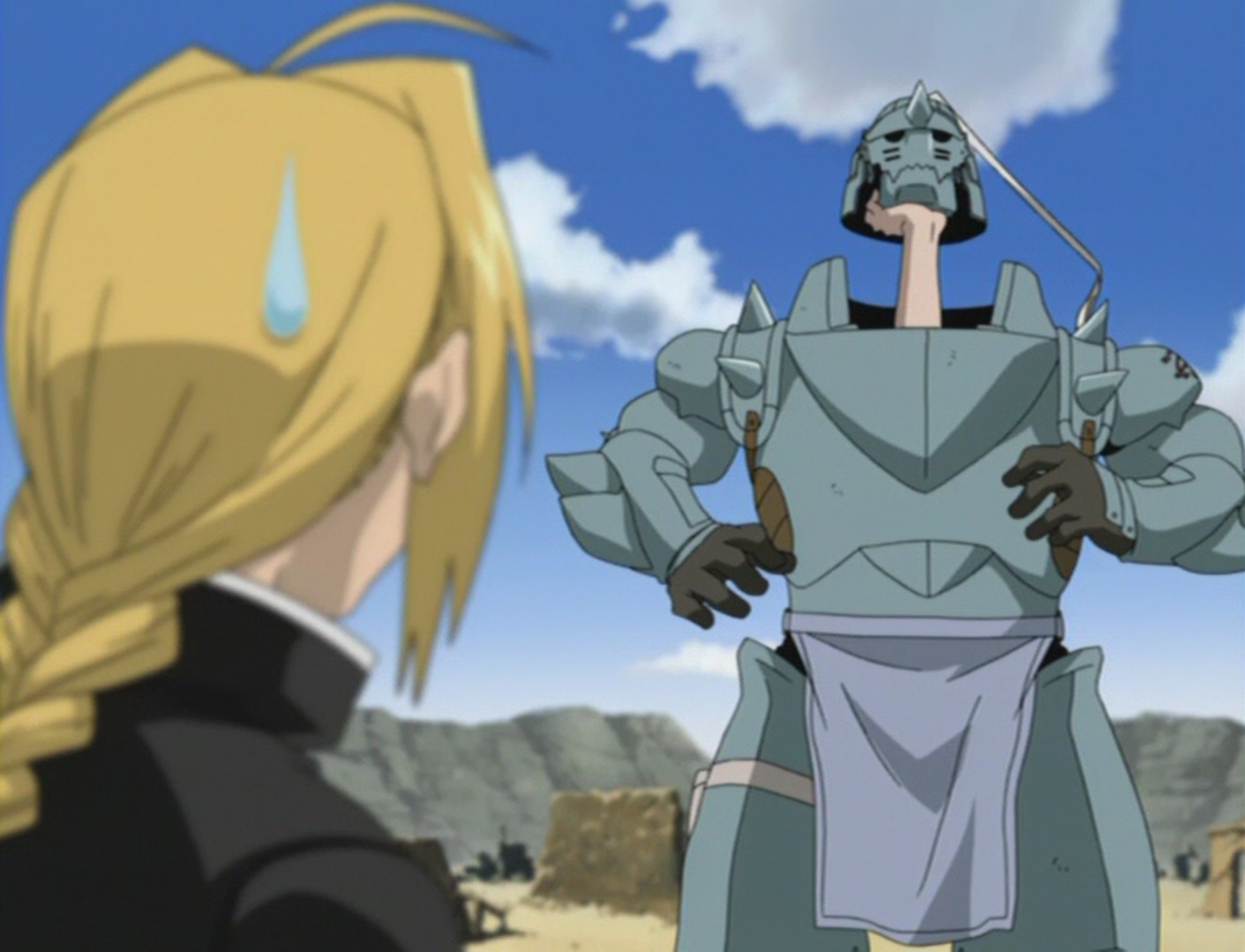 Forty episodes into one hell of an emotional rollercoaster, there’s a turning point in realism regarding mortality for the brothers Elric. Up until Episode 40, every death or dealing therewith in 2003’s Fullmetal Alchemist is associated with alchemy (read: magic) and therefore portrayed, albeit effectively, via reliance upon suspension of disbelief. But at the tail end of Episode 40, one act, portrayed as humanity versus humanity in its most crude and vile form, makes innocence itself kneel in a pool of blood while trying to manifest tears that cannot and will not come, despite the heavy heaving of an earnest soul.

Fullmetal Alchemist aired in 2003. If you've yet to see it, do so. Also, be warned: spoilers follow.

The scene is a simple one, but the journey, with its travelers’ sum experience and evolving empathy, is what endows the episode’s climax with such impact. From the very beginning, brothers Ed (older) and Al (younger) deal intimately with death. Ed literally sacrifices an arm and a leg while Al becomes but a whisper on the wind when they fail to resurrect their dearly departed mother via alchemy. On their consequent quest to fully understand alchemy and obtain the Philosopher’s Stone, a fabled fragment capable of absolutely anything, Ed and Al learn a lot about science and the conservational laws of equivalent exchange but never experience firsthand the horror of mortal violence inflicted upon one human by another.

Up until this point (and for a good deal after) in this series, murder is the antithesis to alchemy’s notion of equivalent exchange in that a life is taken but nothing is created as a result. The sheer faith Ed and Al have in alchemy’s founding principle, that “To obtain, something of equal value must be lost," exposes their naivety regarding the ways of the world. And though the brothers have fought monsters both literal and figurative up until this point, it’s a simple thrust that opens their eyes to the horrors of humanity.

Although a homunculus, Pride has been created in the image of man and ages in kind (a previously unattainable feat in alchemy). This allows him to pass himself off as a human and retain the rank of Fuhrer with the wholehearted trust and support of those within the nation he heads. Martel*, as a chimera, is a serpent-infused human hybrid with face of an angel and unmistakable curves of a woman. She can use her serpentine capabilities as the elite soldier she is when needed but blends in perfectly with “the crowd.” Although both are not wholly human, each appears very much so. 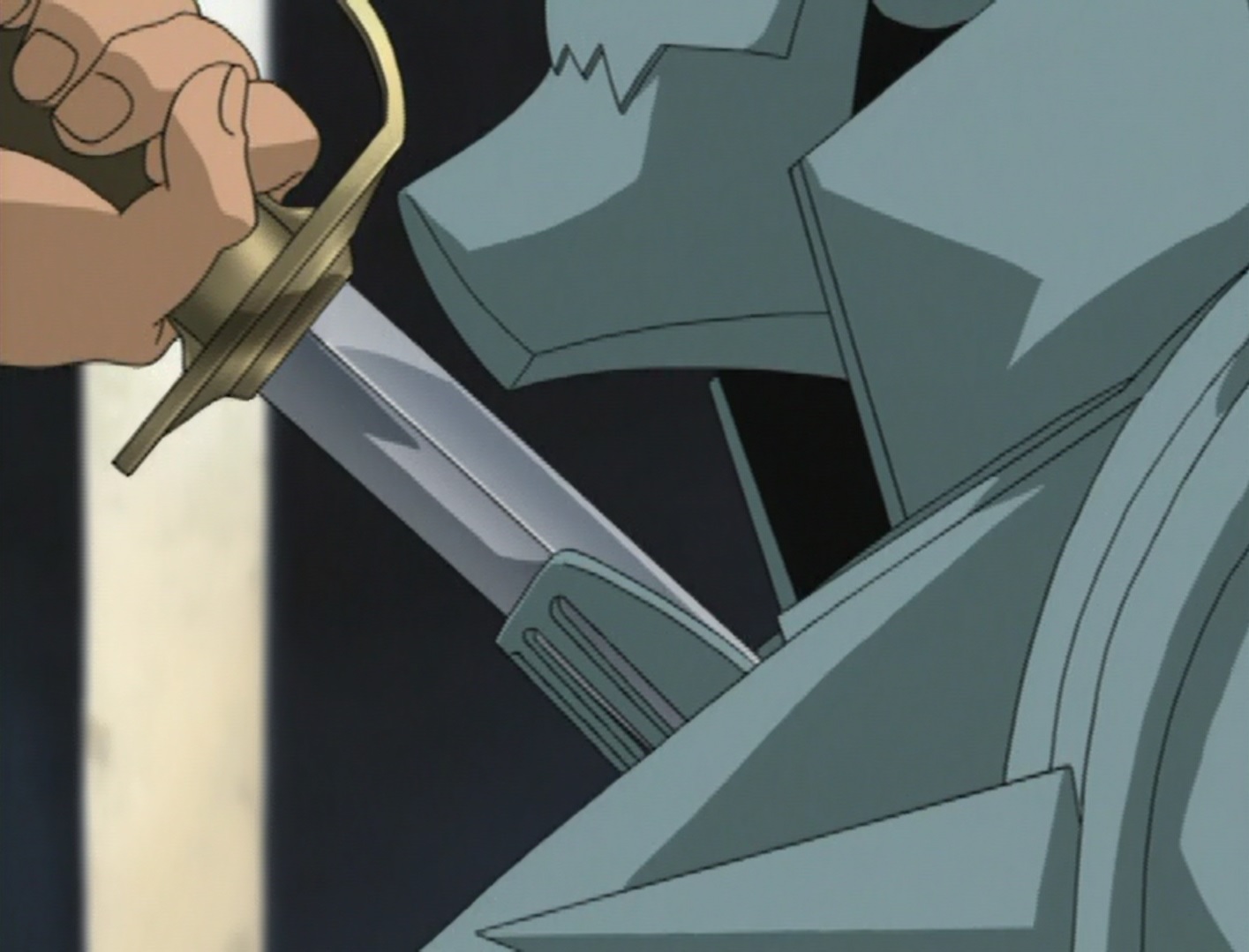 So when Martel hides from the Fuhrer by crawling, at Al’s insistence, inside his hollow metal self, Al is, in fact, hosting a very vulnerable human (as opposed to an elite soldier). And when Fuhrer Bradley walks onto the scene before members of his commanded army, he plays the role of a human. So when, in one very physical (not supernatural) action, Bradley thrusts his drawn sword down Al’s hollow gullet, the steel that impales poor Martel is seemingly lunged by a human hand and received by human flesh. Martel doesn't even exercise her serpentine capabilities while restricted within the hollow cage of Al, making her all the more human. (Two-fold: spectators might view this as human-on-human violence seeing as Al’s “emptiness” isn’t a fact known by anyone other than the top brass.) And then the episode ends. 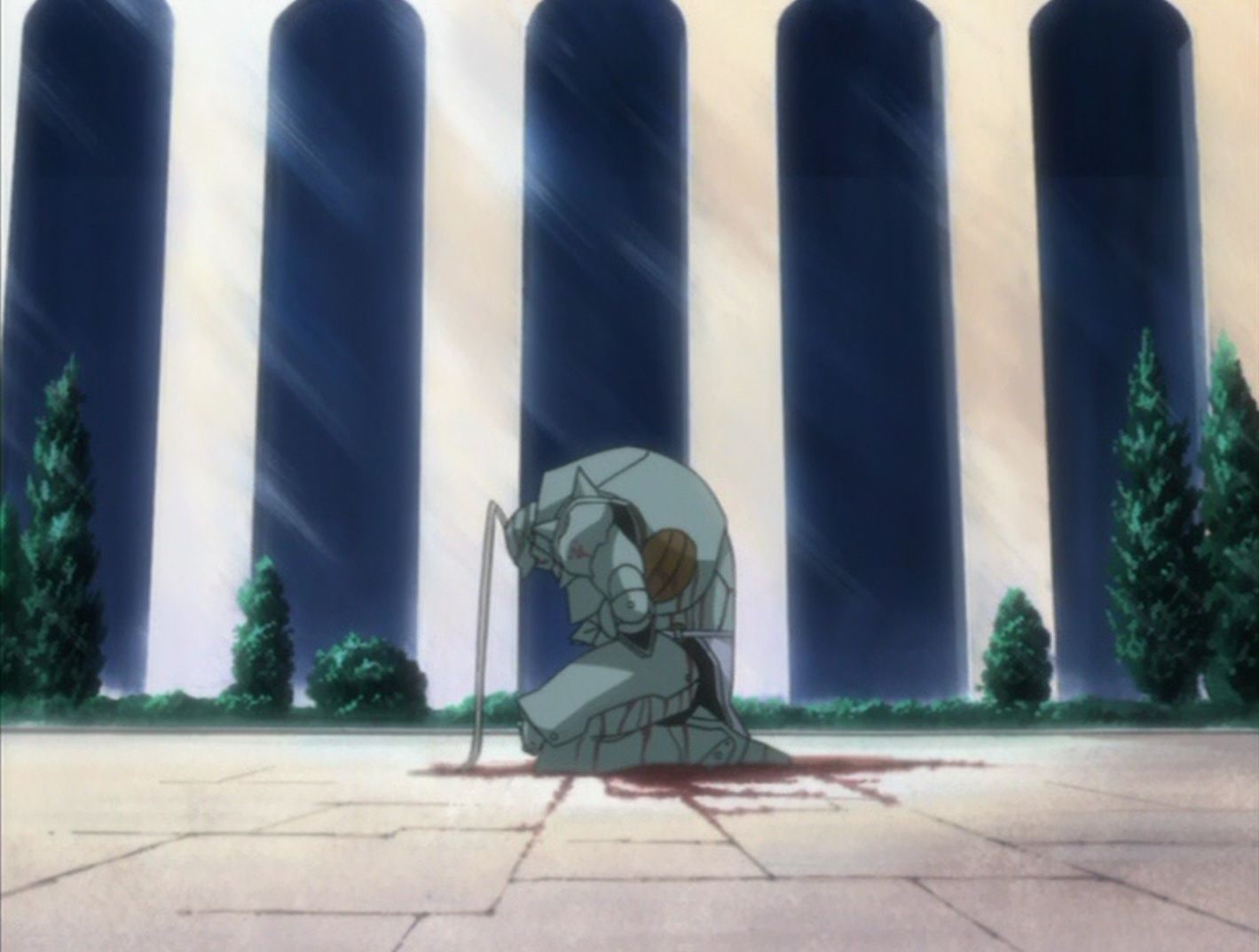 Imagine, if you don’t recall, the space that implies. Week after week, biweekly with two-parters, the Elric brothers conquered everything before them. In one episode, while divided, both brothers are shaken to their emotional core. Ed gleans from his observations that he hasn’t been saving anyone and may, in fact, have facilitated the corruption of an innocent, while Al, in addition to being physically violated, realizes just how helpless he is when it comes to directly protecting anyone intimately. (Note his previously unsoiled sash now sullied by Martel's blood.) Thus the youthful optimism perpetuating the Elric brothers’ purity as well as viewers’ vicariously placed hope start to corrode amidst bombastic brass and swelling strings.

Episode 40’s conclusion is an epic end to fantasy via the introduction of realism: Al’s violation, Martel’s death, and the realized consequences of Ed’s actions. It’s all pretty heavy stuff that’s intended to leave viewers, like Al in that final scene, curled up in the fetal position and wrenching from the pain of so much being taken away. 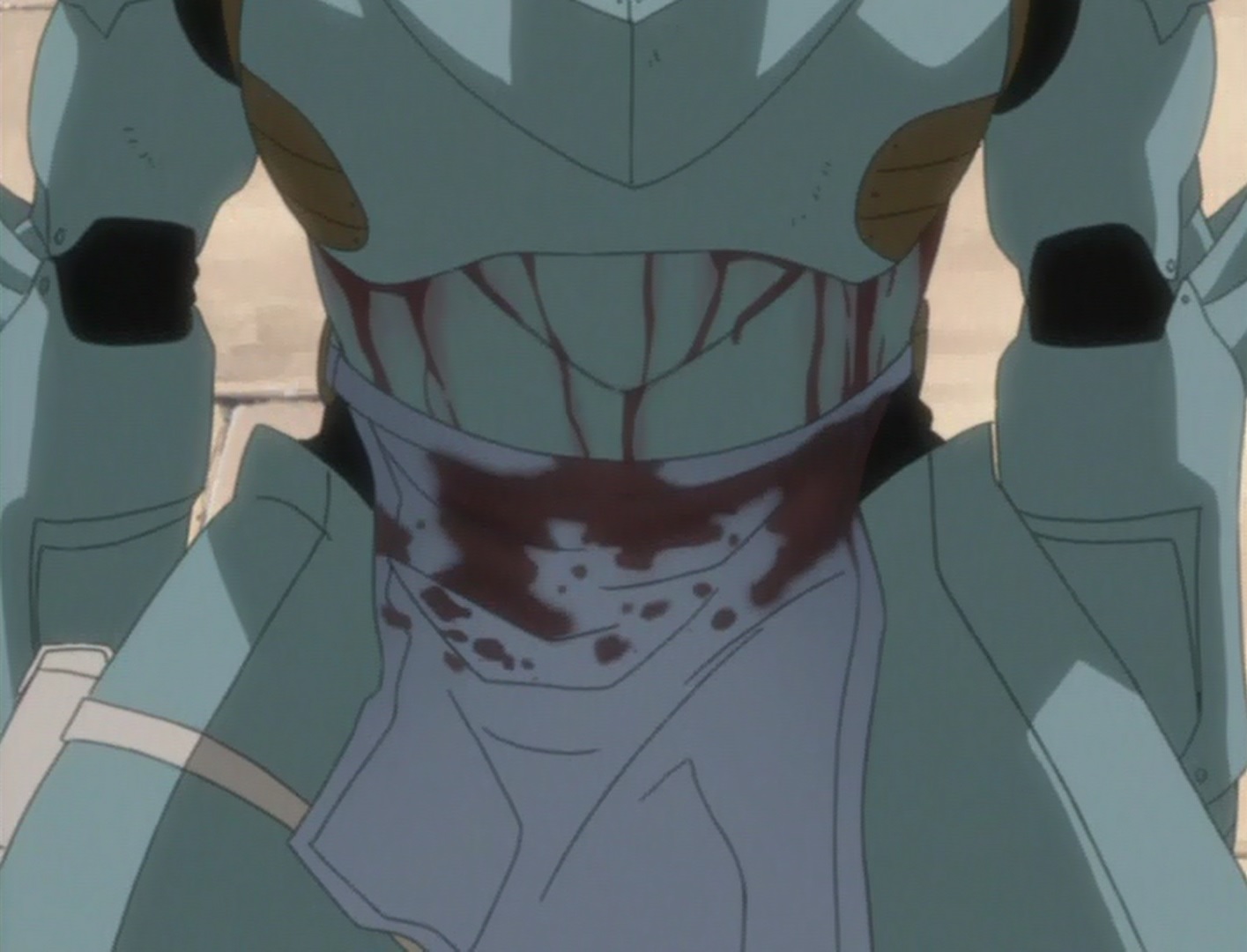 *For reference, I am going by the FMA 2003 subtitle translation of the name

Fullmetal Alchemist is streaming on FUNimation.com, Netflix, and HULU.