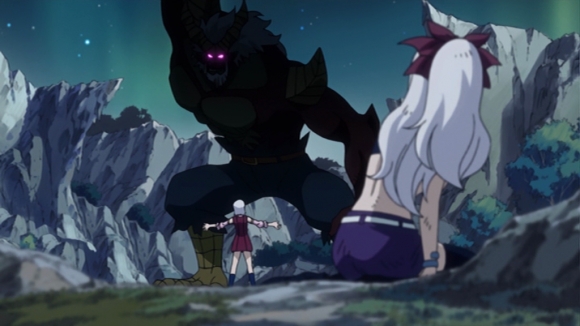 Looking at the above two images, it’s hard to imagine what the true significance of them is. On first examination, you might say that the creature in the first might have killed the figure in front of it. Indeed, the second image might support this theory. But you would be right and wrong in that case. I will explain. The images come from an episode of the ongoing TV series Fairy Tail. In the first a character named Lisanna Strauss is attempting to talk with her brother Elfman, who has changed into the large creature you see in the first picture. Their big sister Mirajane is in the foreground. And in the second, we see Elfman and Mirajane over the grave of Lisanna.

The scene really brings to life the loss Elfman is feeling at that moment. We’ve all done things that we regret, though I would hope it’s not something as serious as killing a stranger or a loved one. Things we wish we could take back but can never do. I cannot fathom the anguish that Elfman is going through. Lisanna was the youngest of the Strauss siblings, so Elfman felt he should have protected her from all the evil in the world. The fact that she died by his hand makes him even more anguished. The moment of her death is handled with incredible silence after a very noisy episode; literally, you don’t hear anything. That really shocked me, along with the image Lisanna being tossed like a ragdoll into the air. Now Elfman has to carry the weight of what he did all the days of his life, hoping for some universal form of forgiveness. It must take supreme effort for Elfman to go on with daily life after that — more than I probably would be able to muster. I couldn’t do it. Could you?

Anime doesn’t scare or shock me as much as it once did. So when Fairy Tail snuck this scene in, it really amazed me that anime still has the power to jolt a person into such deep thoughts. Bravo, Fairy Tail creators, bravo.