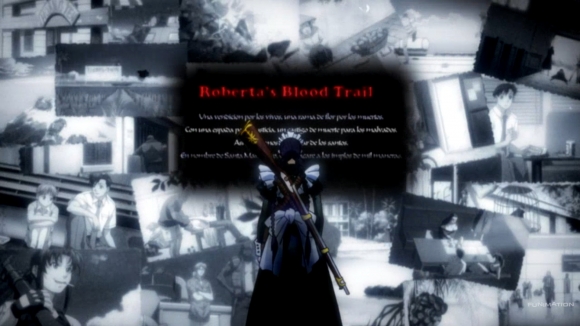 The problem with being set in a realistic world of debauched violence and continuing into a third season is that Black Lagoon must continually up the ante on its crazy to keep its viewership. “Been there, done that” just doesn’t suit a series about a group of mercenaries with a powder keg of a gunman based out of an island overrun with smugglers and drug cartels and syndicates (oh my!) of all sorts, and setting the bar by ending the first arc of the first season by launching a torpedo boat towards a helicopter gunship is ambitious to say the least. For better and worse, whether deepened by sheer body count or depth of depravity in action or back-story, Black Lagoon never stops one-upping its own bombastic bloodlust. The Russian mafia, art-dealing Nazis, gun-trafficking nuns, a maid, vampiric fraternal twin assassins, and a bevy of bounty hunters (including a chainsaw-wielding mute) all come to be thorns in Lagoon Company’s side. But why, out of all of the above, is the maid the monster who gets an entire series of OVAs? …because she’s batshit insane.

Pushed over the edge by the assassination of her employer and personal savior, Roberta (the aforementioned maid, who happens to be a former FARC guerrilla with the nickname of “Bloodhound of Florencia”) vows vengeance on those responsible and anyone who gets in her way. This warrior-made-maid-made-governess, brought to the brink of sanity by guilt, is pushed over the edge via a mix of hallucinations induced by abused barbiturates and the pressures of combat. She stalks the streets of Roanapur like a lone rabid wolf foaming at the mouth while taking down members of Hotel Moscow, The Triad, the Columbian Cartel, and everyone else like they were silhouette targets in a test range. 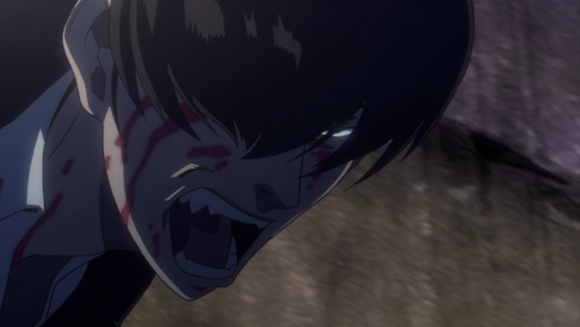 Sure, this is a bit edgier than Season 1 Roberta, but it’s just above the bar. There’ve been twelve episodes and a few arcs since; where’s the exponential crazy?! My expectations are being toyed with here. Oh, what’s that? There’s an episode called “Oversaturation Kill Box.” Please, go on. Don’t let me stop you.

Snapped (somewhat) back into reality by the loss of her charge—snatched away from the presence of her delirious, rampaging self, Roberta realizes she’s dropped her Madonna mask in front of her young master and plans to make amends by making everyone pay for making her do so. It’s during this insanely short and beautiful rampage within a building to which she’s helped lay waste that Roberta encounters Lagoon Company’s powder keg, Revy, and a couple bounty hunters she’s called in to help. This is what goes down: 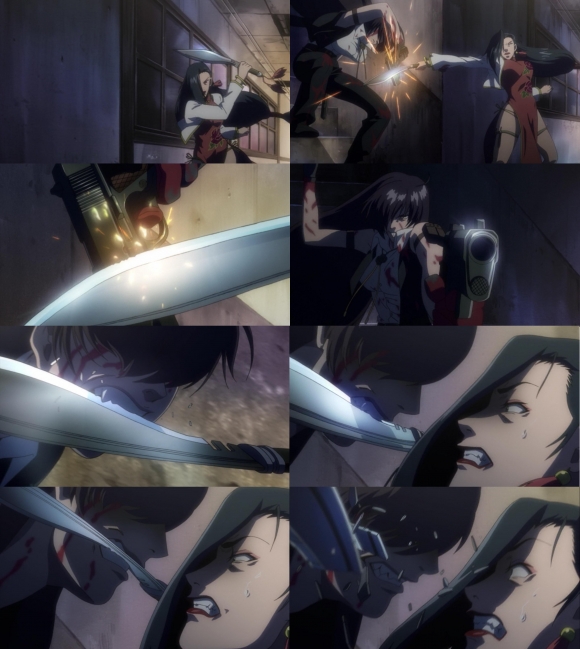 Sight unseen, the affectionately nicknamed “Chinglish” (Shenhua) runs towards and instinctively swings one of her blades into the seeming emptiness of a nearby stairwell. From the shadows, Roberta’s pistol blocks the blade, deflects it, then fires disarming rounds. One of Shenhua’s blades flips into the air, wherefrom Roberta catches it between her salivating teeth, clamps down, and shatters it—all without losing her snarling grin. Let me reiterate: Roberta eats a goddamned sword! Shenhua, like the rest of us, has her mind blown at that point. Black Lagoon has stepped over the boundary of realism into fantasy, but it does so with a rush of adrenalin and psychosis which does not so much beg forgiveness as insist on your want for awesome for doing so.

There’s plenty of amazing to be had amongst all the episodes of Black Lagoon: Roberta’s Blood Trail, but this is the apex of its insanity. I can’t wait to see what’s coming next! 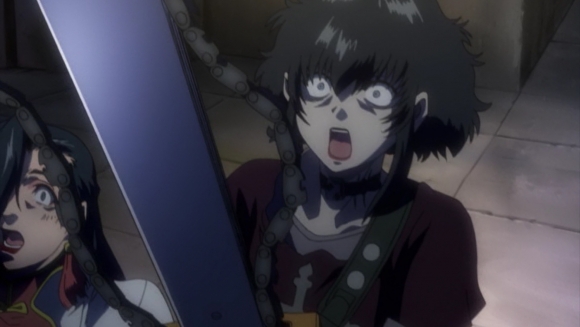