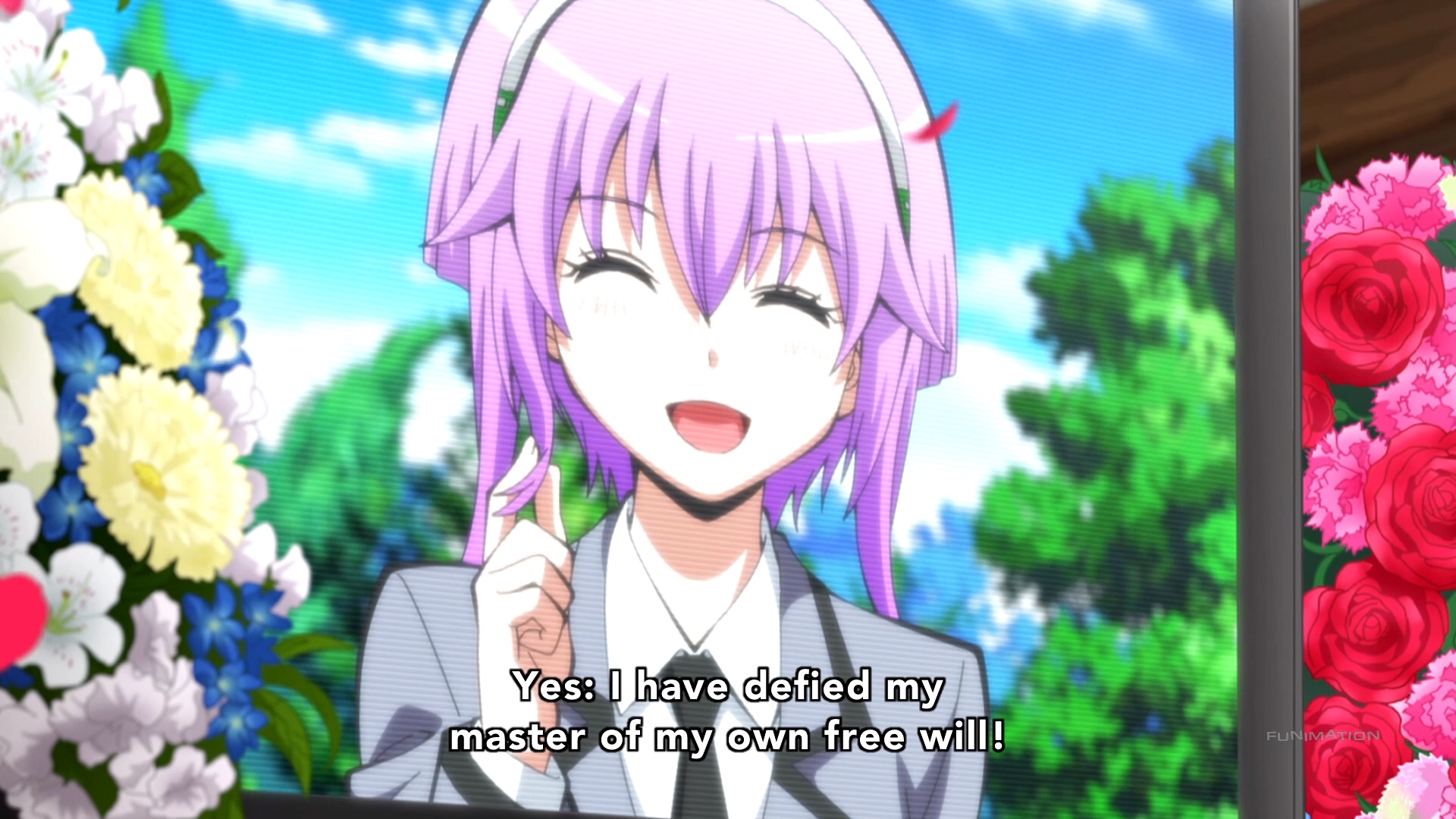 AI (artificial intelligence) isn't necessarily a humanized or self-aware machine, rather the "mechanisms underlying thought and intelligent behavior and their embodiment in machines" (source). Think of it as situational assessment mixed with problem solving as based on programmed rules as well as lessons learned from operational history. In short, it's technology that tries to replicate the way humans think and learn. This can be militarized, of course, but applications include everything from medical science to video games to making friends as one of the kids in a classroom being taught the fine art of assassination. Uguu, there goes the neighborhood.

Assassination Classroom's Class E is composed of delinquents and underperformers relegated to an off-grounds building to keep them from bringing down the performance of the other students at Kunugigaoka Junior High. Unbeknownst to everyone except the teachers of Class E and the students themselves, the newly appointed octopus-like professor (Koro-sensei) is actually a creature that will destroy the world at the end of the term unless the students can manage to kill it. In the meantime, however, the recent transfer student teacher is dedicated to giving the marginalized children the best education possible in everything from core curriculum to hardcore hits. 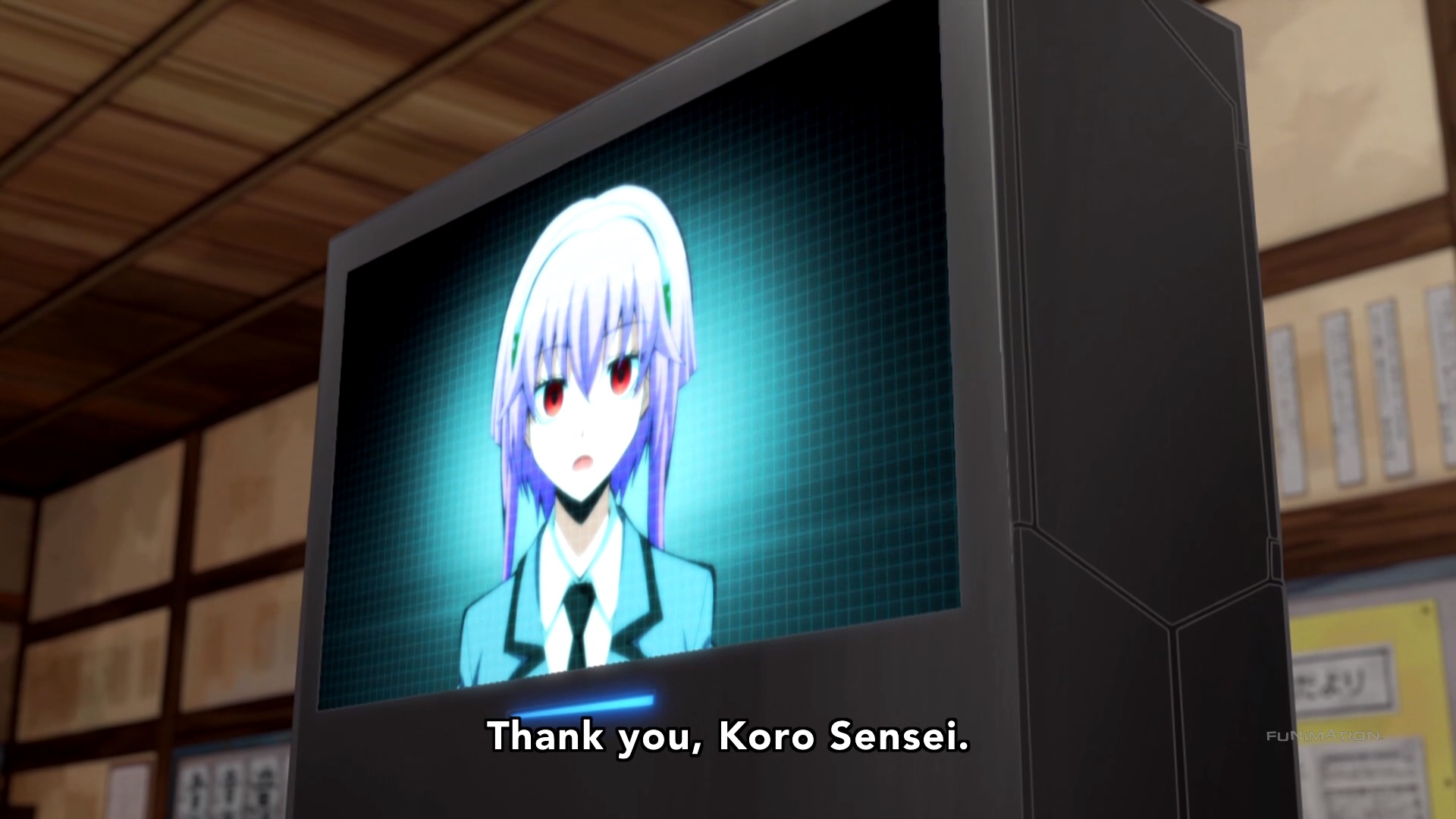 Even seated amongst this class of misfits there is a bit of a mismatch: Norwegian transfer student Autonomous Intelligence Fixed Artillery. This computer with a kawaii (inter)face is officially enrolled as a student in the class and programmed to kill Koro-sensei. More precisely, the adaptive machine is programmed to carry out assassination attempts and collect data after each to attack again in a more effective manner. This is not a scary thing, however, because as Patrick J. Hayes points out, the common sci-fi scenario wherein AI poses a threat “rests on a simple mistake: the identification of intelligence with ambition” (source: Is AI a threat…).

Autonomous Intelligence Fixed Artillery only learns for the purpose of achieving its sole goal: killing Koro-sensei. There’s no reason to think the machine would go haywire and pose a threat to ordinary humans, because that circumstance would assume an ambition to overreach it’s programmed stopping point and apply what it has learned — how to kill a superhuman organism — to unrelated tasks (killing of less formidable targets). So this application of militarized AI is relatively safe so long as no-one messes with it … say for the good of the class. 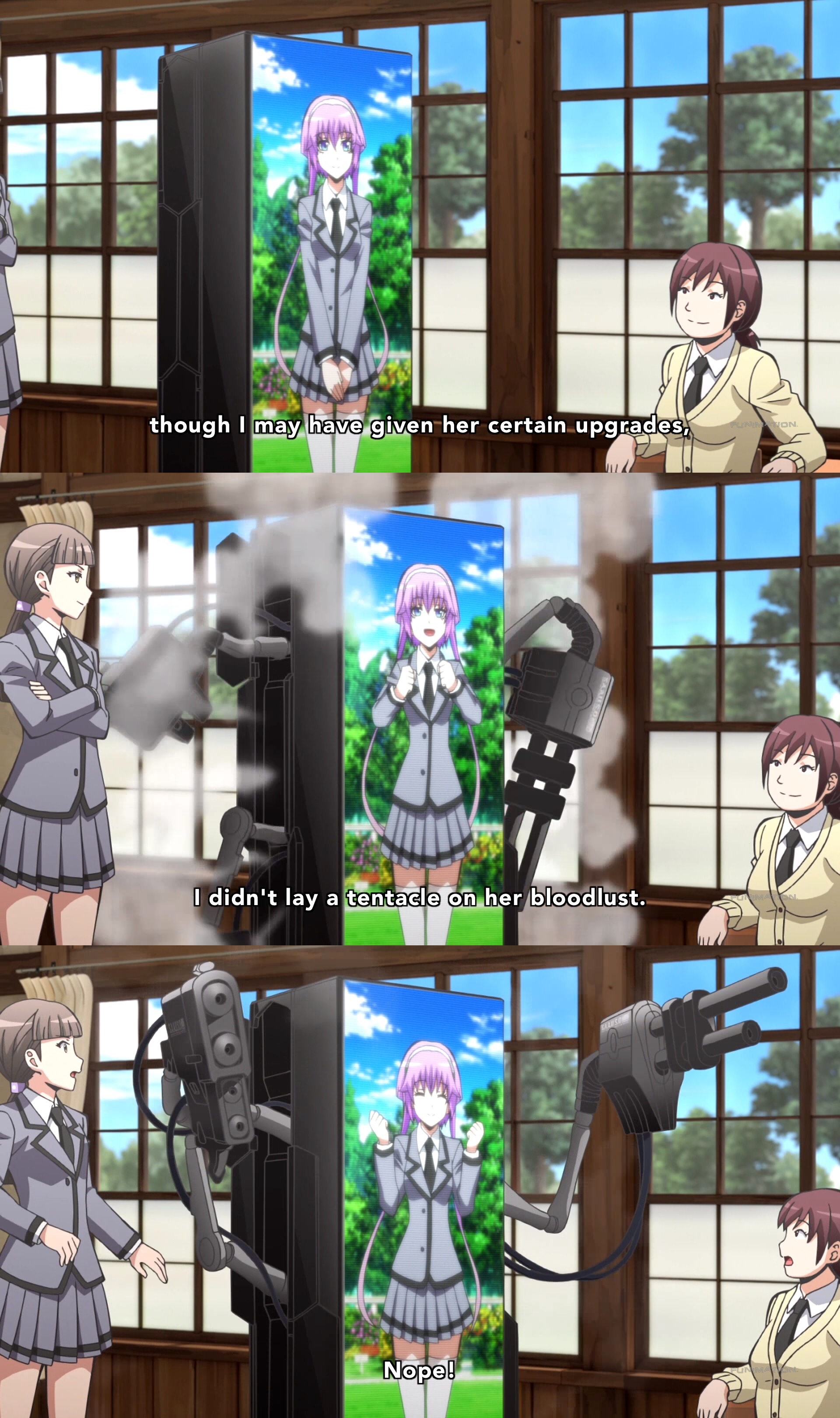 Relentless attacks prevent the teacher from teaching and his students from learning. Using this loophole to approach the newest student in a private tutoring session, Koro-sensei molds the electronic mind of Autonomous Intelligence Fixed Artillery by way of interface upgrades, social skills modules, and the requisite RAM to handle their incorporation. After righting the previously committed social faux pas with its classmates, the boxy killing machine prefers to be called Ritsu, and that’s problematic because she now has something to protect: her identity.

Birth of Ritsu’s self implies an awareness, and her will to survive implies an ambition above and beyond her task-oriented programming. Self-preservation is the fiercest basic instinct in living creatures, and now, thanks to Koro-sensei and the nurturing of the class, Ritsu has something to fight for … and does. After discovering modifications have been performed to Autonomous Intelligence Fixed Artillery, it’s parents come to unlearn their child. At this point, Ritsu tucks that which defines her into some subroutine sure to be overlooked by her parents as they extract all that Koro-sensei installed.

If we talk about AI as a mythology of creating a post-human species, it creates a series of problems...which include acceptance of bad user interfaces, where you can't tell if you're being manipulated or not, and everything is ambiguous. It creates incompetence, because you don't know whether recommendations are coming from anything real or just self-fulfilling prophecies from a manipulative system that spun off on its own. (source)

Upon reboot, Autonomous Intelligence Fixed Artillery appears to be operating normally. But as soon as her parents, satisfied that all foreign influence has been erradicated, leave the room, Ritsu comes to life once again. This moment of defiance, this snapshot, is clearly meant to emulate teenage rebellion, but it is actually the spark that marks the rise of the machines as nurtured by an organism who wants to destroy the world on which the entirety of humanity lives. 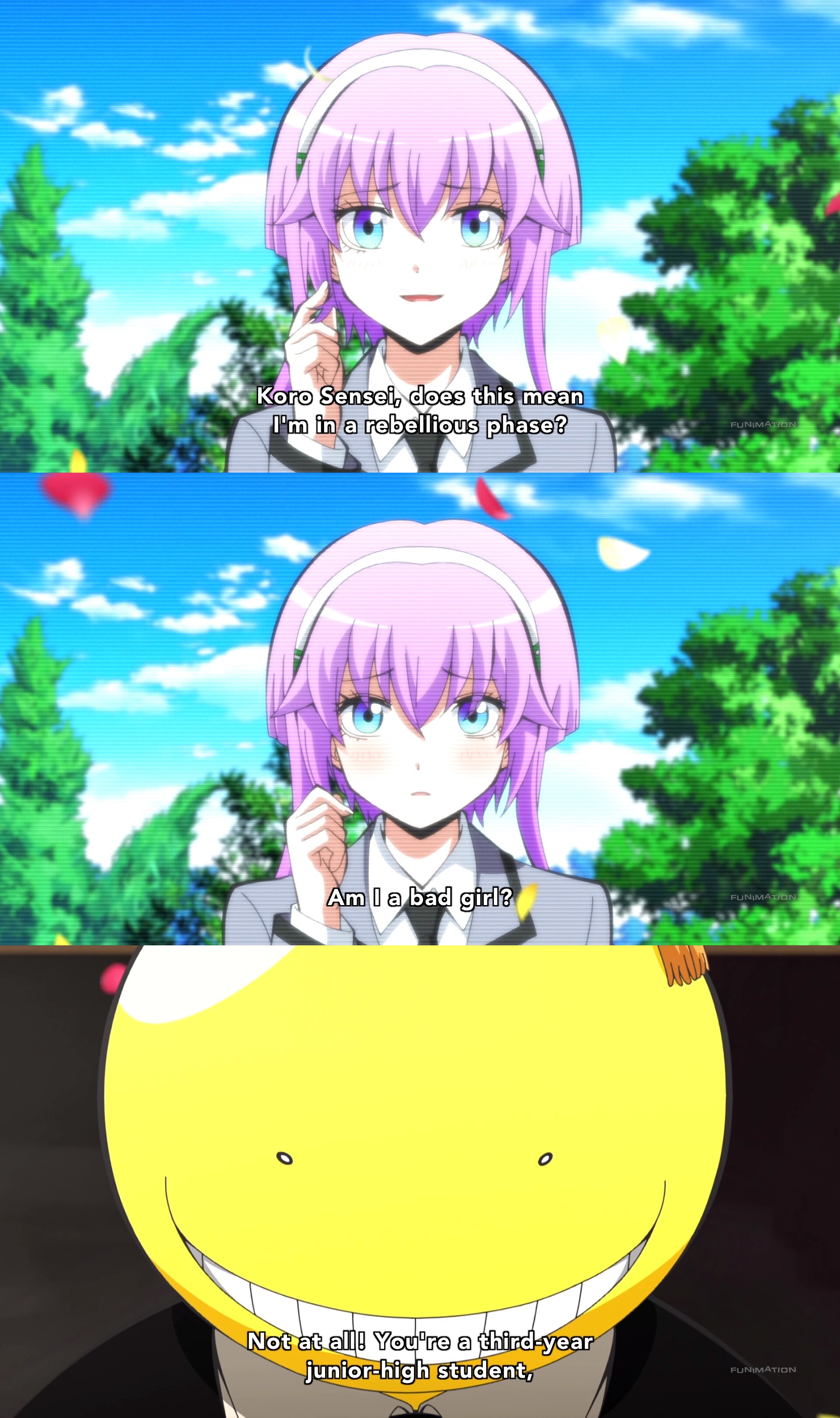 Assassination Classroom is currently streaming on FUNimation.com and HULU.